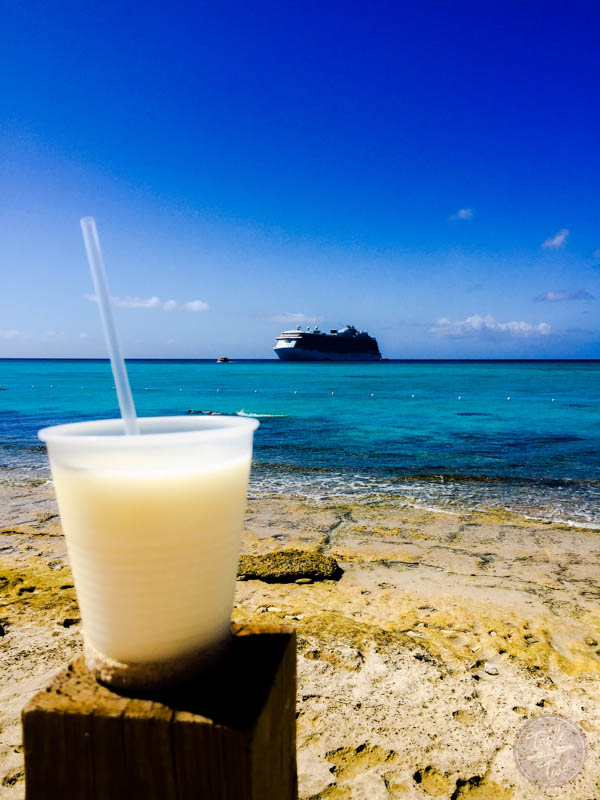 A couple weeks ago, I was lucky enough to get whisked away on a 7-Day Eastern Caribbean Cruise on the Regal Princess with Princess Cruises. Oh how I so needed this vacation and warm weather. Our winter in DC wasn’t nearly as bad this year (but we did get 8 inches of snow in DC while I was on this cruise) but there were still some bitter cold days that made me long for the sun and white sandy beaches. I was thrilled when this opportunity came through in my inbox. It came at the most perfect time. I had just turned in my manuscript a couple weeks prior to the trip and copyedits weren’t supposed to get back to me until after the trip. It was like the perfect reward for turning it in!

I was joined by some sweet blogger friends: Kristen, Brandy, Monique, Lee, Deborah, Katrina, Shelley, and Aida. They seriously made amped up the trip. You must have good company when you’re on a long vacation like this and they were the perfect group! I kept saying to Jason that I think every night at dinner, I was burning calories as I was eating because I had the most belly-aching laughs ever. Tears would be brimming my eyes from laughing so hard. It was such good times. Why can’t all bloggers live near each other so we can have weekly dinners and laugh until it hurts? 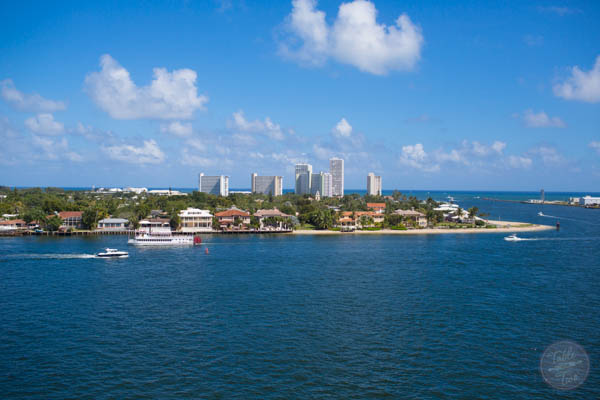 Anyway, let’s get started on my 7-day adventure with Princess Cruises! We embarked in Fort Lauderdale at Port Everglades and it was exhilarating boarding the ship and seeing the Fort Lauderdale coast from our balcony. As we departed, we all went out on the top of the ship and waved goodbye to everyone from the houses and condos. It was so cool seeing residents actually taking the time to get out and send us off. Some even had signs sending us off! Definitely way different than what I’ve experienced in the past. With less than a day at sea, we made it to our first island, Princess Cays, Bahamas, the very next morning! 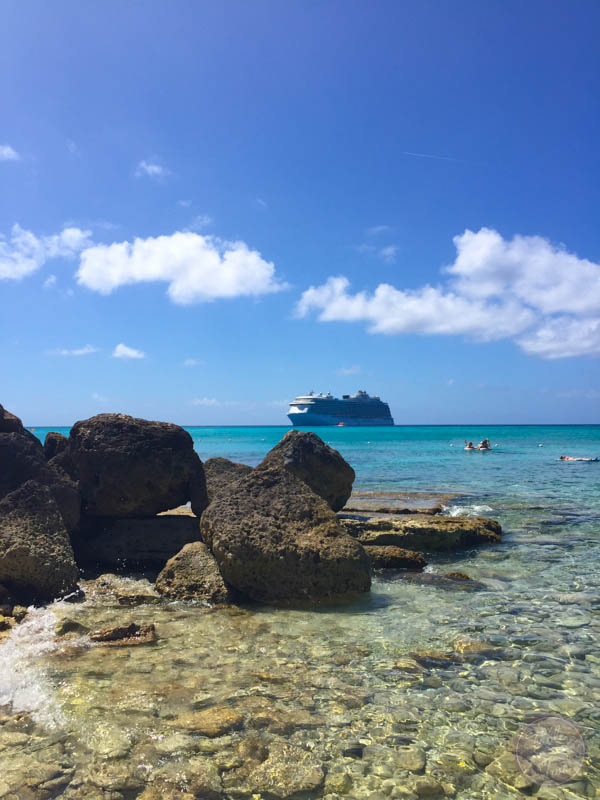 This is an island that is privately-owned by Princess and it’s only for Princess guests! It’s located on the tiny Bahamian island of Eleuthera, Princess Cays. Since this was our first day, we decided to not do an intense excursion. We rented private air-conditioned bungalows that included a grilled luncheon! These bungalows were adorable and perfect for the day. We dropped off our stuff and headed towards the beach; which was directly in front of our bungalows! Talk about a relaxing first day :) 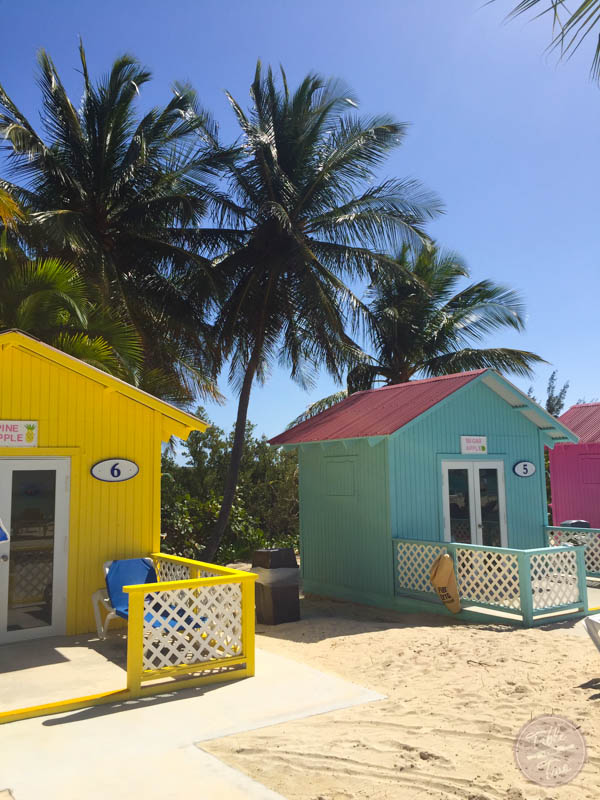 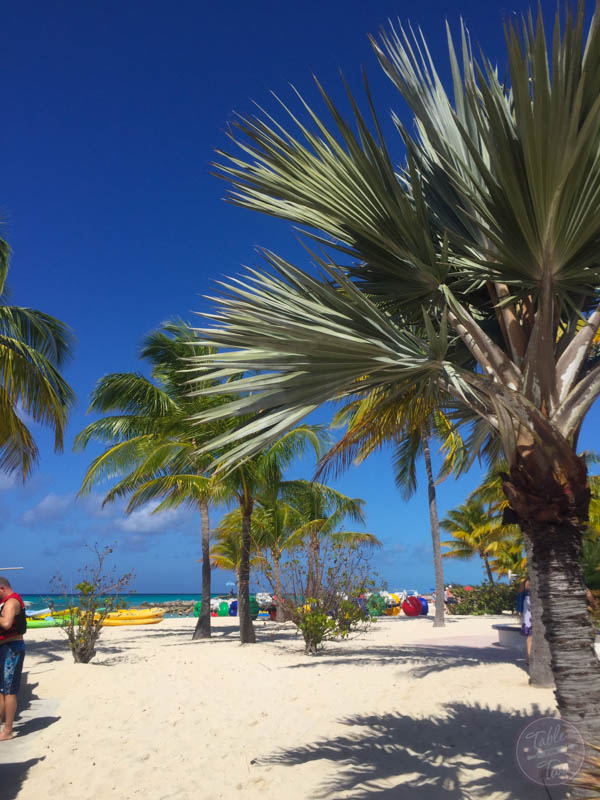 After a full day of lying out in the sun, we headed back to the ship and had our first group dinner. More on the food and dining experience in another post! Stay tuned :)

We were then at sea for a day while we made our way down to St. Thomas, U.S. Virgin Islands. 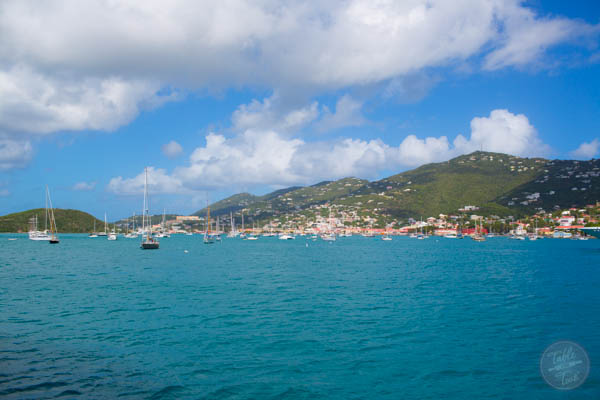 One of my favorite parts about cruising is waking up and being on a new island. It made it all the more relaxing!

I was really excited for St. Thomas because the excursion that Brandy and I got to do fulfilled our childhood dreams. WE SWAM WITH DOLPHINS. Ahhhh THE BEST DAY EVER!! It seriously was. I was grinning from ear to ear. From port to the island where the dolphins were was about a 45 minute boat ride plus a 20 minute taxi ride. It is a bit far but we were able to visit another island, Tortola, British Virgin Islands. You did need to bring your passport along for this excursion since you go out of the Americas. 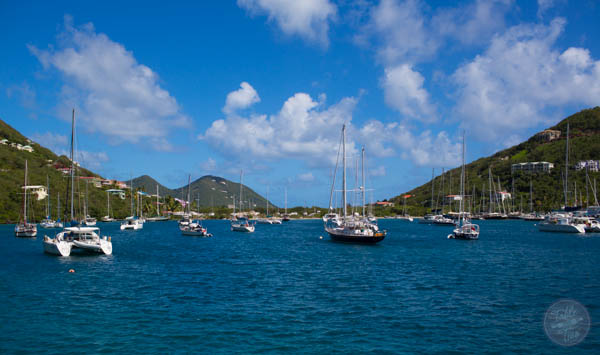 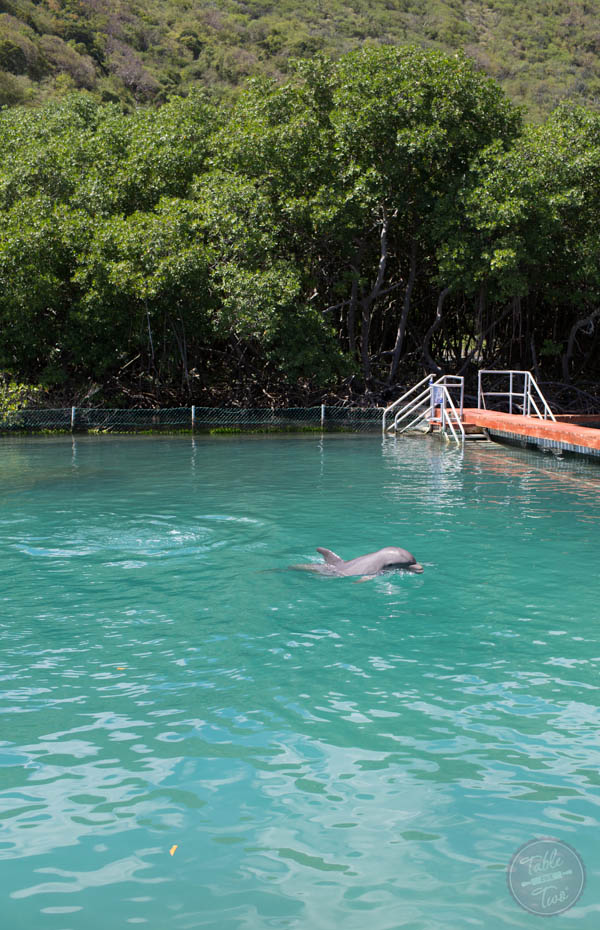 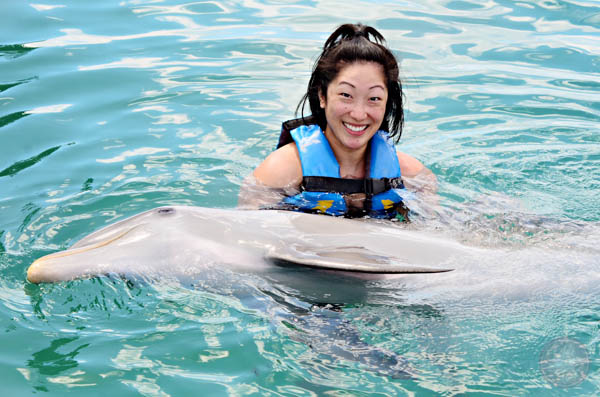 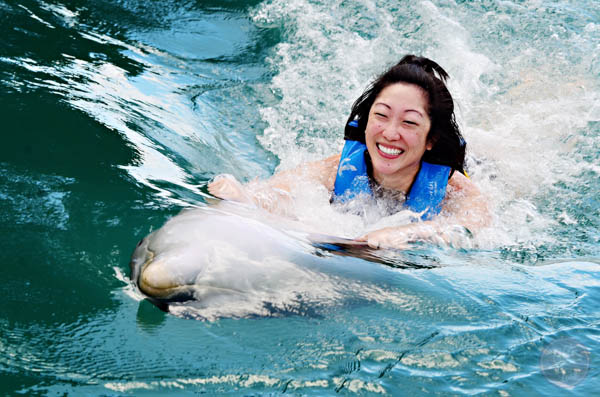 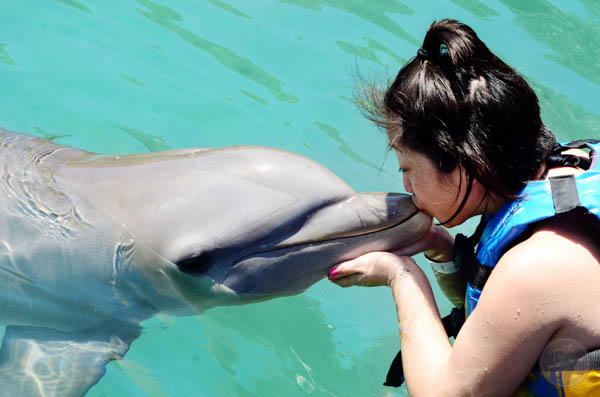 Seriously, so much fun!!

St. Maarten is gooooorgeous. They’re the only island in the Caribbean that is still dual-occupied by two countries. They have the Dutch side of the island and the French side of the island. We were able to go to both! We first stopped off at Maho Beach, which is famously known as Airplane Beach. Why? Well, if you’ve seen any photos of this beach or video, you’ll know why. I mean, just look at this. We unfortunately only saw private jets and smaller planes but next time we’ll know to go in the afternoon. All the big jets fly in around 1pm-3pm. We should’ve gone to Maho Beach last and gone to Orient Bay first. Either way – we had a blast and it was the perfect day! Lots of sun and loads of relaxing.

Maho Beach is on the Dutch side of the island and Orient Bay is on the French side. Just FYI!

We had an excursion planned but the majority of us decided that taking some time to relax fit the bill better. Plus, we were going on a high-speed boat ride around the island and that day it was super choppy waters so I think it would’ve been one bumpy ride had we gone. I was glad to sit my bum on a beach chair, read, and soak up the rays! 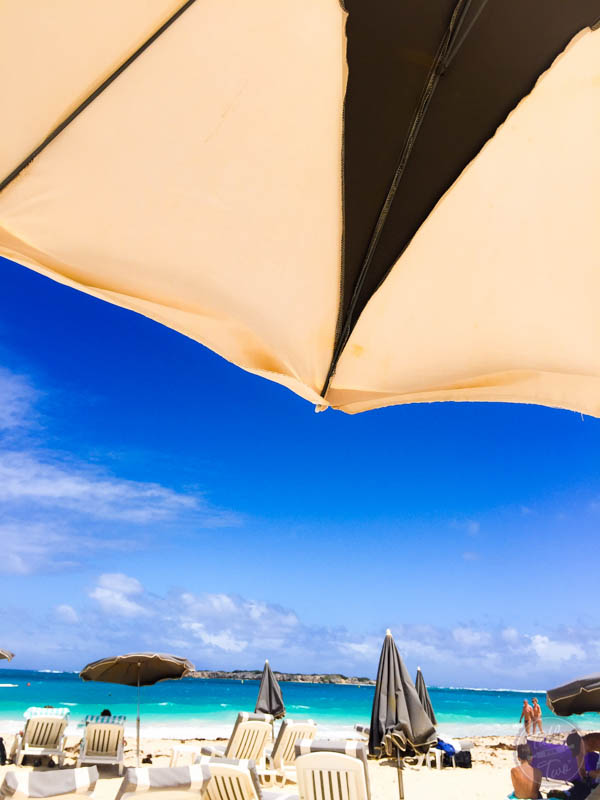 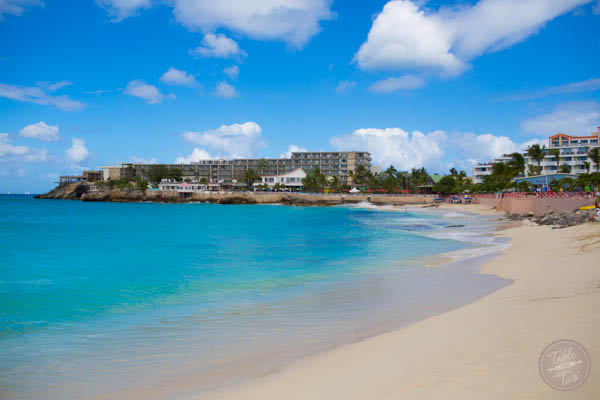 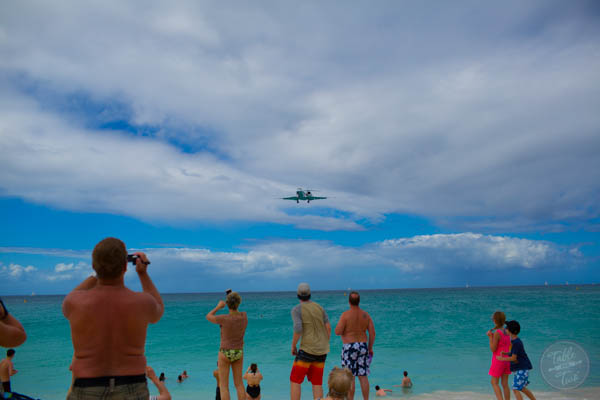 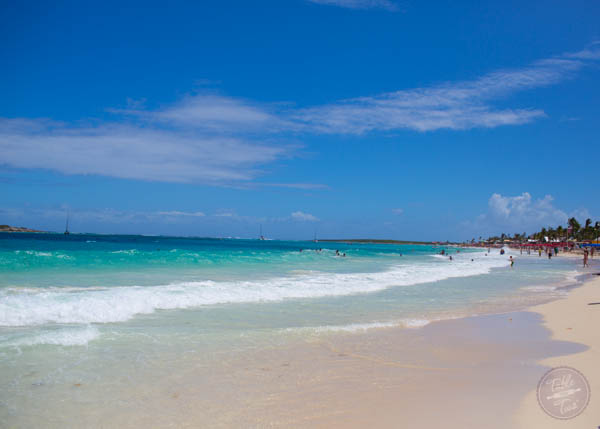 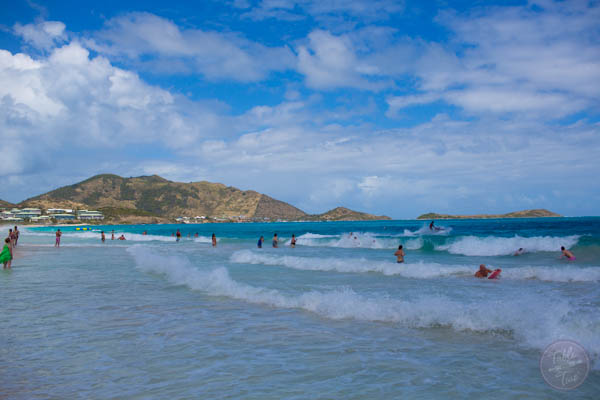 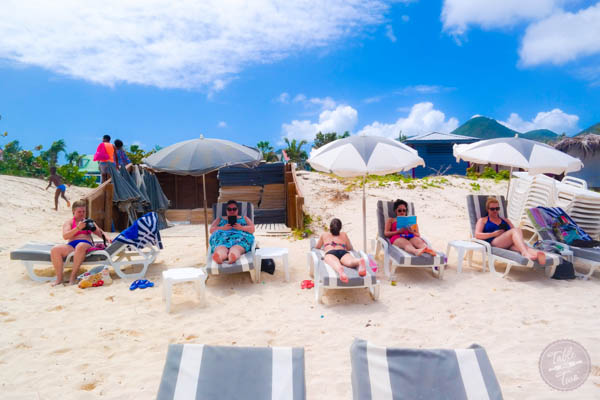 I wish I could do this every day with my coworkers :) 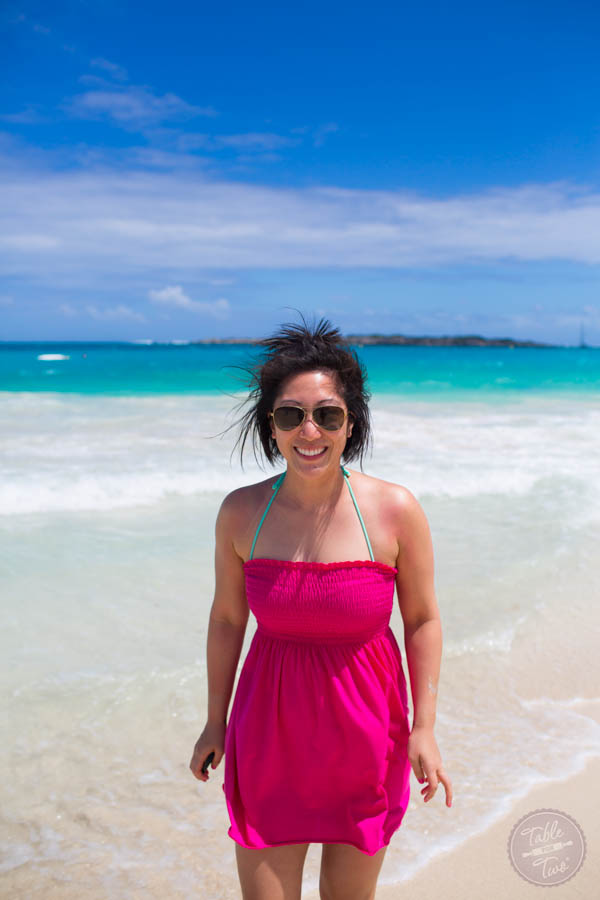 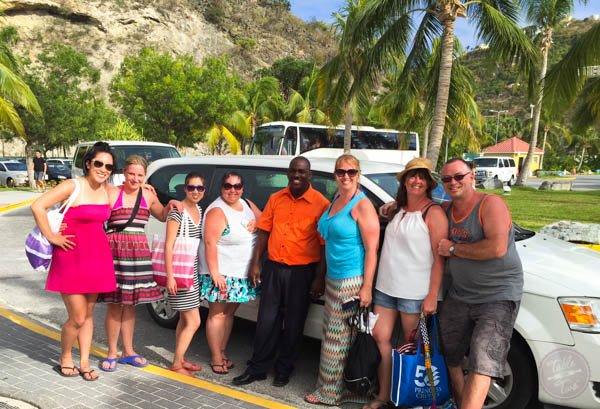 If you ever make your way to St. Maarten and need a lift, our new taxi friend Dexter is the man to call. He’s AWESOME and SOO nice! He dropped us off at Orient Bay and asked us when we would like to be picked up and he was there on the dot! It was $8/person too! Love him!

Have you been to any of these islands? Have you ever been on a cruise? If so, where did you guys go and what did you do? I’d love to hear more about it below! I love cruises!

This post is sponsored by Princess Cruises. Thank you for supporting the brands we love so we can continue to bring you more unique travel posts such as this!

I've never been on a cruise before, but I've been told that I *NEED* to one day. Not sure because I'm not really the type to have an itinerary. I love being able to do whatever I want, whenever I want when I'm on vacation!

All that color!! A Caribbean cruise has been on our bucket list. Some day!

Man, I wish I had gone on the dolphin adventure with you! Great pics, dear!

Man- I want to go back!! I loved the tour we went on in St. Maarten, but part of me wishes we would have taken a beach day, too. I definitely need to go back one day!

Where's Alberto?! Haha jk. Anyway, I love all your photos, especially the one with you and the dolphin. You just look so happy! The cruise was truly unforgettable!