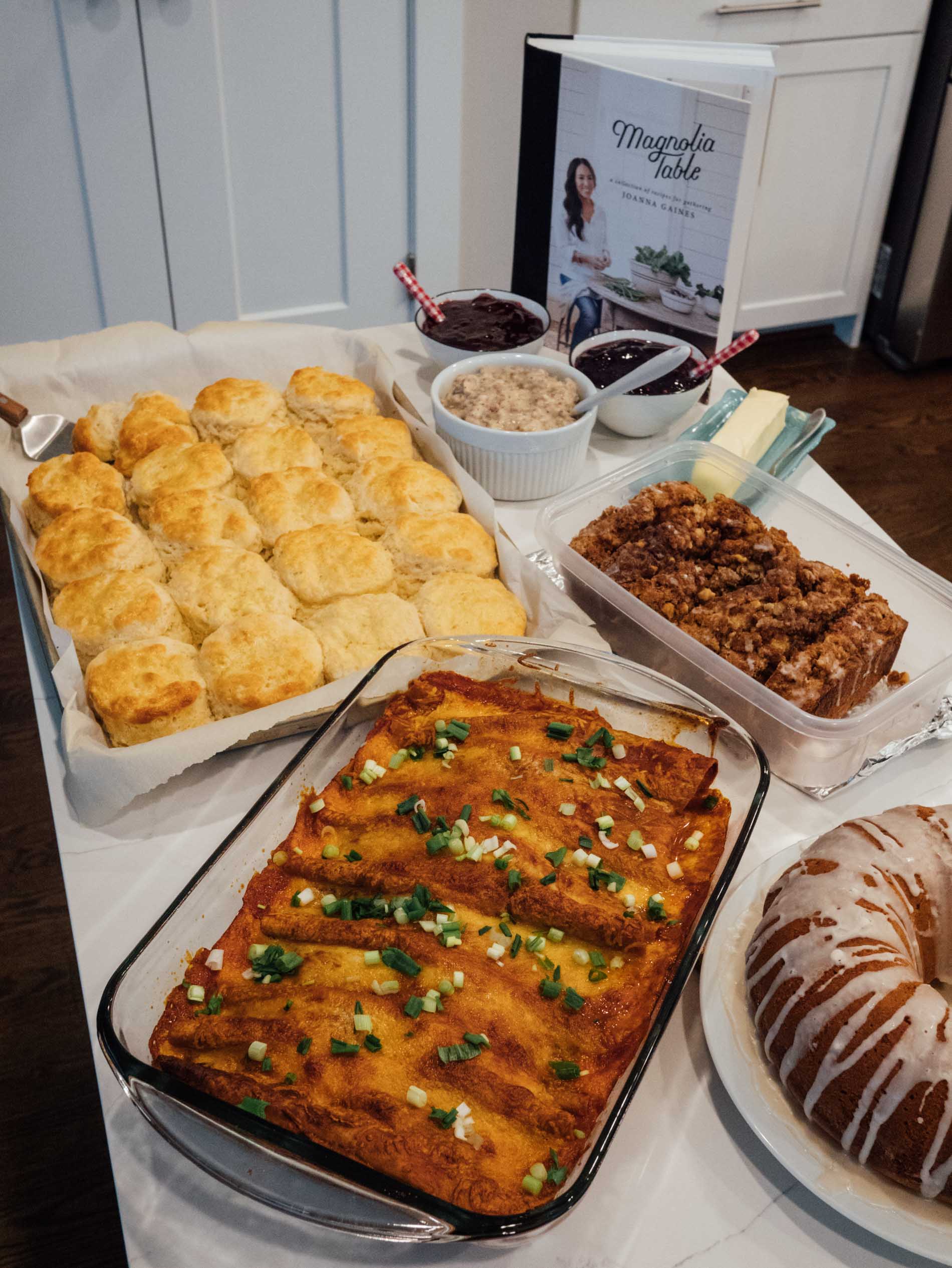 I’m a *little* behind with sharing our cookbook club meet ups. They are definitely still happening every other month and my girlfriends and I are seriously LOVING it.

I feel that we have gotten into a good groove in terms of what we all choose to bring. I usually pick something savory (because I hate baking) and so does one or two others and then we usually always have one or two desserts. It seriously could not work out more perfectly.

We also have a strong core group of women now that show up to every event so its been really fun for everyone to get to know each other (they all know me as the common denominator)! I wish we could do them monthly but it’s just too hard to schedule them back to back so we’ve been scheduling them for every other month. It is a lot do-able that way.

I have a post coming up on how to create your own cookbook club! It’s one of those questions that I get asked a lot so I figured I’d do an entire post on it.

Okay so for May, we did Joanna Gaines’ new cookbook, Magnolia Table.

I called dibs on making the biscuits because from her show (and being the first recipe in the cookbook), they looked and sounded divine. They were EVERYTHING. Like the most fluffy and buttery biscuits I have ever made. They were so amazing that I ended up posting the recipe because I just had to share with you guys.

The other dishes for the day were beef enchiladas (that were seriously addicting), a lemon bundt cake, and a cinnamon swirl walnut quick bread. I made a quick white sausage gravy to go on top of the biscuits and I also had jam on the side for those that wanted to go a bit British. I could not find clotted cream anywhere around town, even at this British pasty place, because of the recent nuptials of Harry and Meghan. I think everyone was having their own viewing party and snagged up all the clotted cream ;)

Anyway! Everything everyone brought was easily devoured. We barely had any leftovers.

Overall rating of the cookbook? I’m not sure I’d spend the money on it if I had the chance to flip through it. I made this pasta dish of hers for Instagram Live (bowtie pasta with baby kale and sundried tomatoes) and while it was good, there was NO way Jason and I could eat that. It was loaded with heavy cream and cream cheese and more cheese. A lot of her recipes use cream of chicken or mushroom/condensed soups and they’re very Pioneer Woman-esque in the sense that it would feed a crowd and it is more suited towards people that work out in the field all day and can burn those calories off.

They’re definitely comfort food meals but not a lot of recipes really spoke to me. There is a brownie pie I want to make and a few desserts but the main dishes…I could easily pass on.

Totally just my opinion, though. I still love Jojo but this cookbook gets a 2/5 from me, unfortunately.

Couldn’t agree with you more on the book review. These portions are for a huge family (at least 6+) & definitely not my little fam of 3. Great for potlucks? But otherwise just wasteful. Not very imaginative either, kind of like brand suggested recipes you’d find on the back of a jar or box. Won’t be buying her new recipe book as I imagine it’s just more of the same.

Julie, The chicken and broccoli looks delish. I plan on trying it tomorrow with my family. Also, thank you for sending me a copy of your week night table. That was so nice to include me. Here’s to a good meal! Mimi

Great! I hope you enjoy!

Those biscuits are the worst. If you think those are good biscuits then you don't know biscuits.

Bold statement. I'm curious as to why you say that? Did you happen to make them and they didn't turn out and that's why you hate them? Please enlighten me on what a "good biscuit" is since you seem to know your biscuits very well. Personally, I thought they were the most tender and buttery biscuits I've ever had. So light and fluffy! I guess by placing a blanket statement on the fact that I "don't know" biscuits, you're also saying me and my three other girlfriends and husband "don't know biscuits" either since all of us happily ate three each..

Thanks Julie, for the review, I’ve been on the fence about buying her book. I had a feeling it would be loaded with those types of recipes. I have 2 recommendations for you. The Dining In Cookbook by Alison Romans is great with a lot of different recipes. Also, Siriously Delicious by Siri Daily is a fun one as well. Chrissy Tiegen’s Cravings is a fun read but her recipes are all pretty heavy, there’s no way that model could eat all of her food and stay her size...lol.

We cooked out of Chrissy Tiegan's book for the first cookbook club meetup!! They are pretty heavy too but I like there was more variety. Thank you for the recommendations of the other books. I made Alison Roman's shorbread CCC and omg they were to die for!