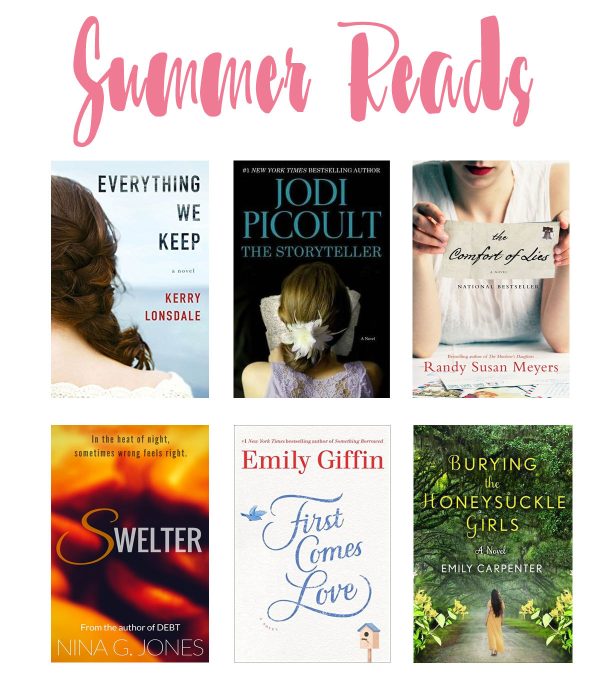 1. Everything We Keep by Kerry Lonsdale – I devoured this book. It’s about a woman named Aimee who, instead of getting married on her wedding day, buried her husband, James. As she tries to reconstruct her life and move on, she is also tipped off about James’ disappearance and dives deeper into what really happened. This is goooood, y’all. Halfway through the book, I did think it was kind of dragging out and taking forrrrever to get to the point but after you get past all that, it was a page-turner and I couldn’t put it down. I needed to know what happened!!

2. The Storyteller by Jodi Picoult – I’m a huge fan of Jodi’s books. They never disappoint. This particular one intrigued me because it’s about The Holocaust. I’m still very much engrossed in this one but it’s another one that I can’t put down. It’s about Sage, a baker, who befriends a man that she soon finds out wants her to kill him as a favor. He used to be a Nazi SS guard, but what is even more personal? Her grandmother is a Holocaust survivor.

3. The Comfort of Lies by Randy Susan Meyers – I had high expectations for this one. It started out so good with different storylines and different families but then at the end, I was like, “really?!” It wasn’t a “really?!” for shock but it was more disbelief that it would just end up that way after going through the entire book. I don’t know, to me, I felt like this book was a waste of my time, lol – but, if you’re up for some infidelity and deep dark secrets that happen in real life but people never talk about, this book is for you.

4. Swelter by Nina G. Jones – this one is about someone you loved in the past but left you and then you settled with someone else but then that someone you loved came back into your life. What would you do? Well, in this case, Lily keeps telling herself she married the right brother but then her husband’s brother comes back in town and let’s just say…it gets juicy and unravels quickly.

5. First Comes Love by Emily Giffin – I’ve been a fan of Emily’s books but her last one, The One & Only, was a big disappointment. However, I can’t give her up and I’m willing to read this new one from her that just came out.

6. Burying the Honeysuckle Girls by Emily Carpenter – this one was one of those books that they showed you as a ‘recommendation based on what you’ve been reading’ so I went ahead and bought it cause it was on sale. It’s about a girl, Althea, who’s mother died but her mother whispered something to her before she died about the honeysuckle girls. Althea goes to seek out her past and as disturbing as it is, she is meant to play a part in it. I can’t wait to read this! It sounds good and has great reviews.

I'm in the middle of the honeysuckle girls book right now and am very much enjoying it. Can't wait to see how it ends!

Marta @ What should I eat for breakfast today

It's good to find it. I always have a problem with a new read :) Thank you!