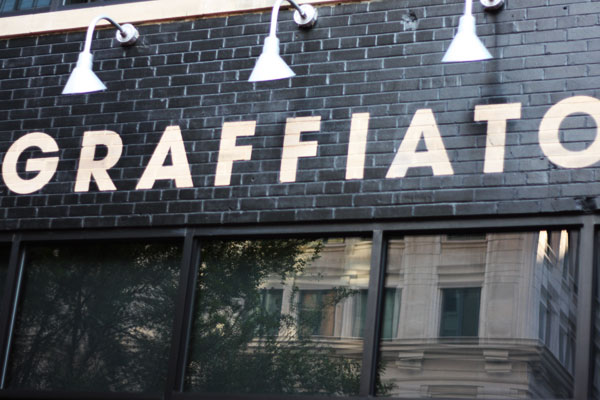 Jason & I are big fans of Top Chef, amongst other tv shows. We’re also fans of Mike Isabella; we like to support local chefs! Anyway, we’ve dined at Zaytinya, where Mike was an executive chef there and we loved it, so when we found out he was opening a new restaurant in DC, we were pretty excited.

“It’s an Italian-inspired restaurant in the Chinatown neighborhood of Washington, DC. The two-story layout features an open ham bar on the second floor and a large wood oven tucked behind a U-shaped counter with 15 bar stools on the first floor.”

The menu consists of various small plates (I’d suggest bringing a couple people with you so you can try various dishes) and pizza. My favorite part of this restaurant, aside from the awesome industrial ambience and decor (and food, of course), is the Prosecco on tap. Yes, you read that correctly, Prosecco ON TAP. Um, love. I love anything bubbly and I love Prosecco. This is the only restaurant in DC that has this — and I thought I couldn’t love this more, but I found out he did this because it’s his wife’s favorite drink. Awwww :)

Anyway, Jason and I, and another couple, decided to give Graffiato a try. We made reservations about a month out (since they do fill up quickly) and when the date finally approached, we were all very excited. Below are pictures and descriptions of what we ordered. Prepare a tissue in case there’s some drool on your keyboard that you need to wipe off when you finish this entry. 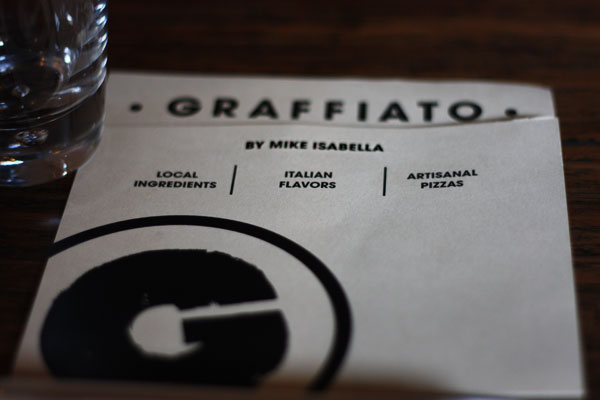 This is the menu that they have folded at your seat. You open it and it’s a front & back menu. 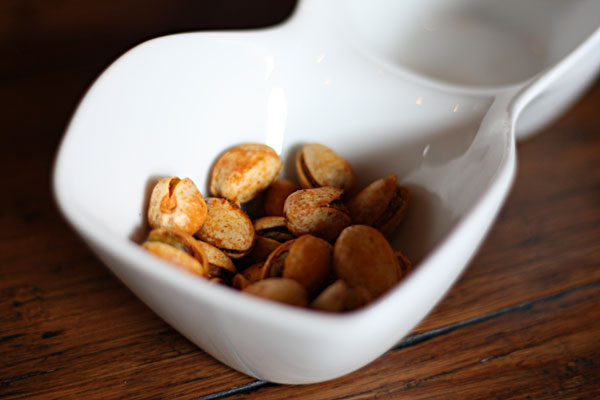 Instead of bread, they give you chili pistachios to hold you over. 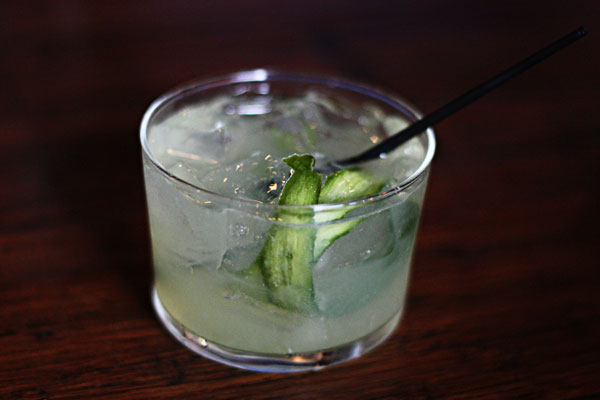 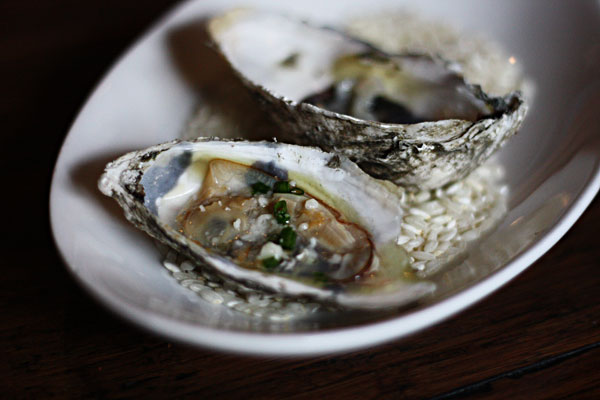 Wood Oven Roasted Oysters w/garlic, lemon, & parmesan — I’m not a huge fan of oysters so I’m biased on this, but everyone else said it was good. It’s pretty garlic-y. 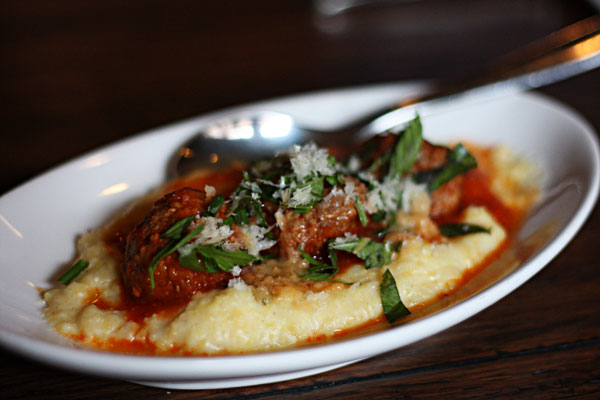 Polenta w/spicy pork meatballs — the meatballs were great and the polenta was meh. The meatballs had a citrus flavor to them and the nice spicy kick was a good “back of your throat” kind of feeling. 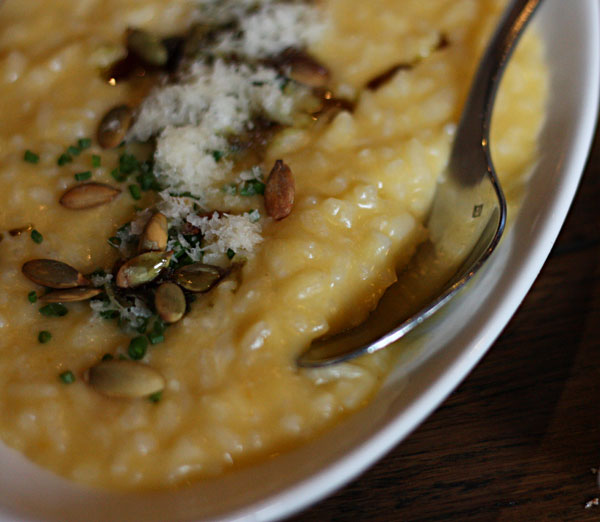 Risotto w/pumpkin, smoked provolone, pepitas — you couldn’t really taste the pumpkin but definitely the cheese. We thought of this more as an Italian-style mac n cheese. It was great though. 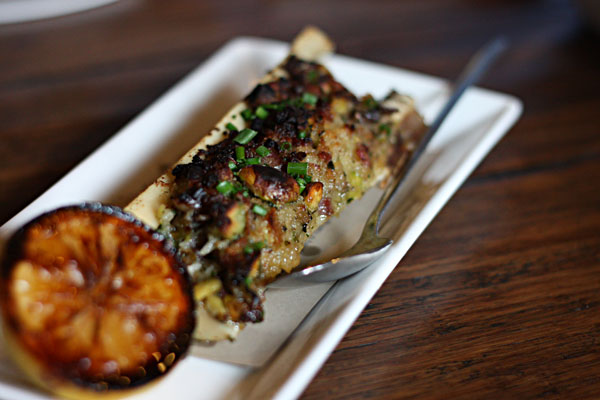 Bone marrow w/pistachio, cured lemon, bread crumbs, bacon — SO good. I’ve never had bone marrow before and this was very flavorful and you could taste all the flavors. They blended so well together. It was a nice presentation too, with the bone marrow actually sitting in the bone. 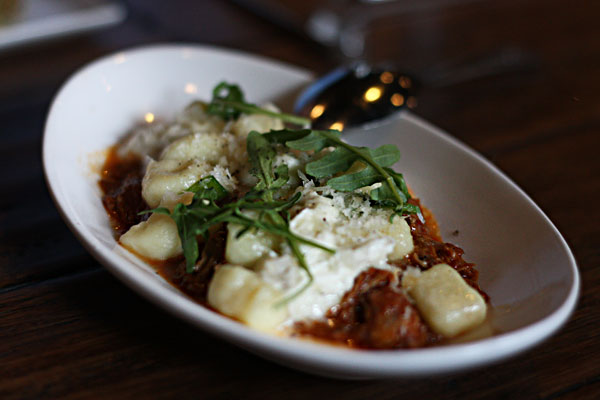 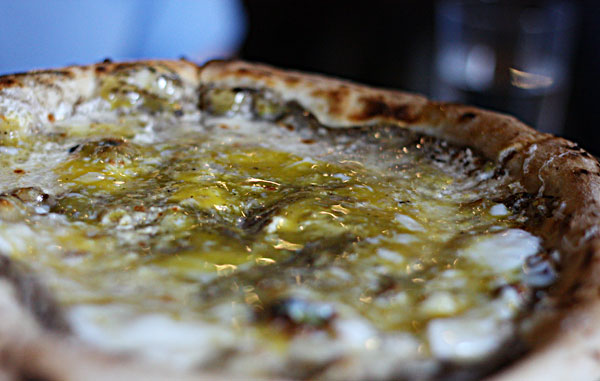 Countryman Pizza w/black truffle, fontina, farmed soft egg — this actually had a poached egg on top and the server breaks the egg for you and spreads the yolk around. I was sad that she did it so fast I wasn’t able to get a picture of the poached egg on top before she broke it :( but this was SO good too. Very earthy from the truffle and great flavors. 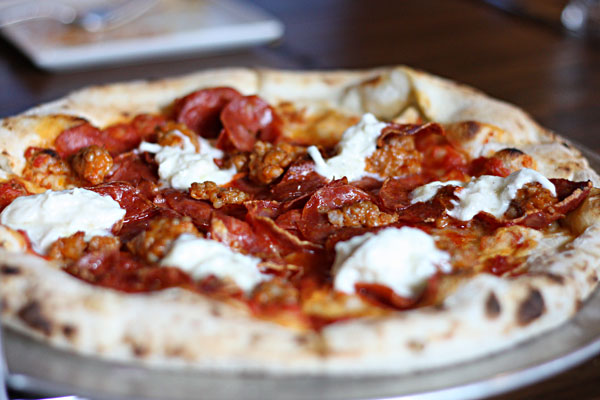 Porky’s Revenge Pizza w/sopressata, pepperoni, sausage, tomato, stracciatella — who doesn’t love a meaty pizza? All the meats seemed really fresh and the sausage was as if it wasn’t even in its casing prior to cooking. Great pizza and the cheese on it was delicious!

There were a few dishes that we all agreed we wouldn’t get again and there were dishes that we would definitely get again in a heartbeat (typical, right?). The pizzas were fantastic, and to be honest, our favorite part of the meal. We thought that the small plates were a tad bit small for what the price was. It was pretty pricey. We kind of felt cheated but at the same time, I guess you can’t expect too much from a small plate — it is called small plate for a reason. Me and the other girl loved our Prosecco and Jason really liked his cocktail. We were there early so it wasn’t too busy so the noise level was decent. The servers and server assistants were all very attentive, our water glasses were never empty, nor did they ever make it past the halfway mark. I loved the industrial vibe the place gave off. It has exposed brick and an open ceiling.

It’d be interesting to come here again in a few months to see what new dishes Mike has come up with, since the menu is seasonal. Oh, and most importantly, the next time we come, we hope to actually see Mike, himself. Of course, out of all the nights he wasn’t there (he’s there every day), which according to our server, has only been 3 times since they’ve opened, the night we went was one of those nights. Oh well, this must mean we have to come back! And YOU must venture out and give this place a try!

holy crap you should be a food photographer - gorgeous photos, makes me awfully hungry!