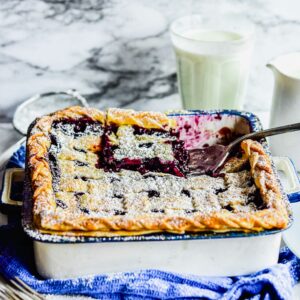 For the pie crust:

I used Wyman’s brand wild frozen blueberries because I love their intense flavor and soft texture. You can use regular blueberries if desired, fresh or frozen. If using fresh berries, keep your baking time closer to the 40 minute mark, and increase the bake toward the 50 minute mark if using frozen berries. Pie dough is easiest to handle when cold and firm. If needed, refrigerate at the crumb or dough in between steps. You can substitute 2 tablespoons of flour for the cornstarch in the filling if needed. The lattice topping is beautiful, but completely optional. Alternatively, you can place the 2nd rolled dough sheet over the filling and cut 3 slits into the middle before placing your pie into the oven, to allow air to escape while baking. To prevent the braided or scalloped edge from burning, cover the edges of the pie with foil before baking. Allow the pie to cool slightly, then cut into slices. Serve with a scoop of vanilla ice cream, a dollop of fresh whipped cream, or eat it as is. This recipe can also be made in a 9-inch square pan or a regular 8-9 inch round pie dish. To serve a larger crowd, double the recipe and use a 9x13 inch casserole dish.