Oven Dried Tomatoes a simple method to make sun dried tomatoes at home in your oven. 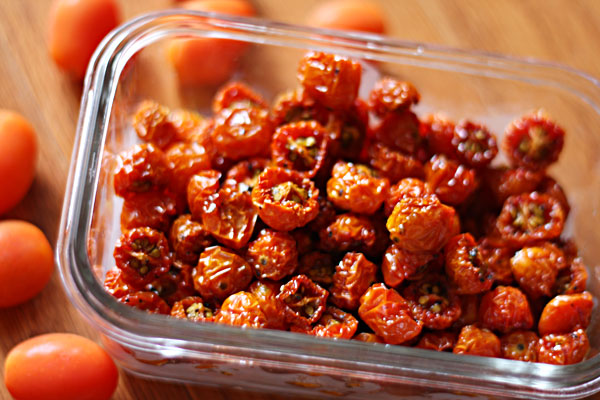 I’m not a fan of tomatoes. In fact, I’m that person that requests them to be taken out of my burgers, the one that picks tomatoes out of dishes that have them, and I refuse to eat cherry tomatoes. However, I’m a fan of ketchup, sun-dried tomatoes, tomato based pasta sauces, and I love cooking with them.

I don’t have a reason as to why I don’t like tomatoes, really. I know they’re sweet and good for you but I can’t just eat a tomato by itself. I can totally eat sun-dried tomatoes by themselves though. I also love cooking with tomatoes. I’m weird.

I love sun-dried tomatoes so much that when I saw this way of recreating them in your oven, I had to do it. It’s the simplest thing and they keep well in the fridge so you can easily add these dried tomatoes to virtually anything — pasta, omelets, chicken, shrimp, the list goes on. It gives the dish a nice natural sweetness and a pop of color.

Try these for yourself. It’s great to have on hand :) I bought a large container of cherry tomatoes at Costco so I split half of the container for this and the other half for another recipe. You can easily do this with as many tomatoes as you want. Doesn’t have to follow this recipe to a T. Below is just a reference of how to make oven dried tomatoes. 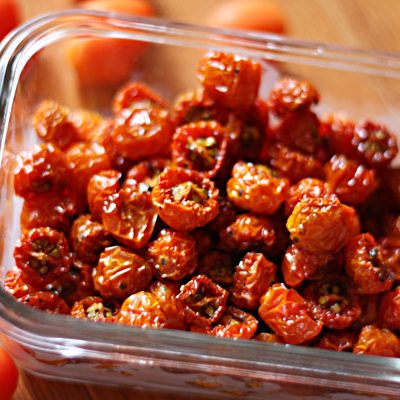 Any idea how long these would keep in the fridge? Your creamy sundried tomato fettucine is one of our go-to recipes. We make a recipe from your blog or cookbook on average once every week!

I would say up to a week.

I am going to assume, too late, that this recipe meant to say 225 degrees FAHRENHEIT. I just instinctively put it on 225 degrees Celsius, which is double the temperature and they burnt to a crisp. Please state what temperature you mean!!

Hi, I'm sorry. I'm a USA-based website and this recipe was written in 2011 when I first started blogging and didn't realize I needed to differentiate. Sorry that you burnt it to a crisp but did you really think at 225 celsius, I'd want someone to bake it for 3 hours?? Regardless, I'm sorry and I will edit the recipe.

Thank you. These look great.

Does it not work with just regular big tomatoes rather than the cherry tomatoes?

I'd imagine it'd work too, but would just take longer since it doesn't take as long to break down tiny tomatoes but a large tomato might take a bit.