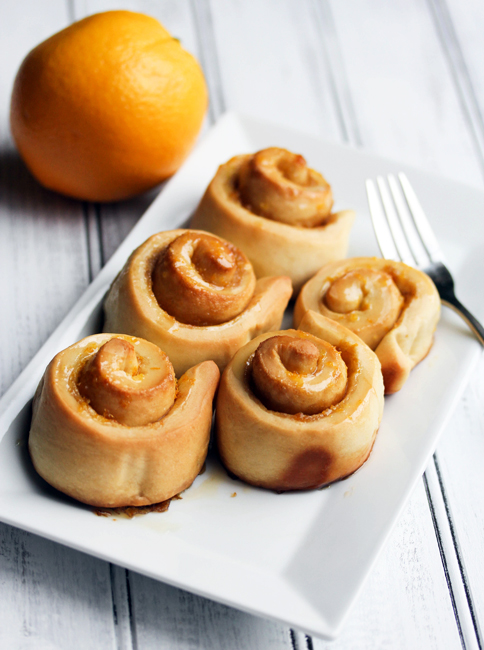 Another sweet PW Wednesday’s! It’s funny that this second go-round we’re all turning to sweets. I guess we’ve kind of kicked the savory out the door although, we still have two more ladies that have to do the picking so maybe we haven’t completely kicked savory’s bum out the door yet — we’ll see! Clearly me and Megan (who chose the recipe this week) got bitten by the sweet tooth bug! 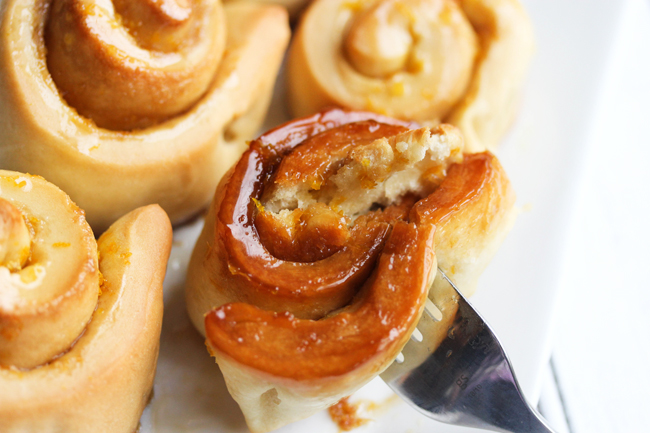 These orange wannabe cinnamon rolls were fantastic! I seriously had my doubts with this sweet treat because the last sweet PW Wednesday we had, it didn’t go well with everyone because everyone thought it was too sweet and way too fattening. Albeit, I liked my choice, but this roll tops it! Definitely.

There definitely was quite a bit of tweaking this time around too and I think that if I hadn’t tweaked it the way I did, the orange flavor wouldn’t have come out as much. These orange rolls were the right amount of sweetness and the orange flavor just perfumed my senses! It was like an orange blossom in my mouth. They were soft and gooey too. Don’t you love the bottom of the roll pictured above? The brown sugar just caramelizing the bottom of the dough. Yum!

Rachel helped me with the measurements because I completely suck at math. It’s laughable. She was able to cut hers down to a very tiny amount, I think her version made 6 but I don’t really remember. Mine definitely only made 6. I only pictured 5 above because I accidentally smushed the 6th one, haha

Here were my tweaks:

There weren’t as many tweaks this time, mainly just cutting down the amount. I seriously don’t get how PW, as lovely as she is, made 48 (FORTY-EIGHT) rolls from her recipe. That’s just insane. Who needs that many rolls?! I mean, geez, I get she feeds farmers and stuff, but still, you’d gotta think they’d have more on the menu than just rolls. Although, my 6 rolls that I ended up making would be perfect just by themselves with a nice cup of coffee.

Grab the recipe over at Megan’s blog today!

Check out the other ladies’ take on this week’s pick!

I always have trouble when I cut a recipe in half or quarters. Does this one work out easily if you quarter the recipe or are more of certain ingredients needed?

This one in particular was cut down a lot, I believe by more than half, so I think you'll be fine :)

This is making me so hungry! This looks SO good!

I saw Megan's already. Fabulous recipe you ladies did this week. They looks so fresh and I swear I can almost smell them right now. I always have to remember to cut PW's recipes down a ton. Only 4 of us here most days so 48 would just be gluttony. Not that I'm opposed to a little gluttony here and there.

I love this summer twist on the spicy classic bun

I love sweet rolls, but I don't think I've ever made orange flavored ones. They sound really awesome! I love scaling back recipes - unless you're feeing an army like PW you just have to sometimes :)