I don’t think anything in the world is more delicious on toast or yogurt than this cinnamon spiced almond butter. Say hello to your new favorite butter!

Almond butter is becoming increasingly more popular lately, and I’m so excited about that! As much as I love some good ol’ peanut butter, almond butter has a special place in my heart.

I’ve found that some almond butters can be a bit bland, though, so that’s why I developed this easy homemade cinnamon almond butter. It’s nutty, sweet, and slightly woody, so you’re not missing out on flavors here! It’s basically kind of like Christmas in a jar!

Whether it’s spread on a fresh piece of toast or tossed into a breakfast smoothie, you’re going to really love having a jar of this cinnamon spiced almond butter in your kitchen.

And don’t worry about it going bad too quickly – when it’s kept in a sealed jar in the fridge, this almond butter will stay fresh for up to 2 weeks!

The absolute best thing about making this recipe is how few ingredients it requires! This ingredients list is short, sweet, and to the point. Only the essentials are needed here!

Not only is it inexpensive to make your own almond butter, but it’s also not chock-full of preservatives like the store bought stuff. I love this natural recipe!

Did you know that almond butter has more fiber, vitamins and minerals than peanut butter?! You need to make this cinnamon spiced almond butter, stat!

Have any extra almonds after whipping up this recipe? Here are some great ways to use them! 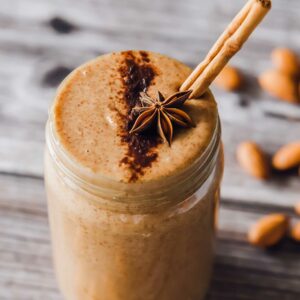