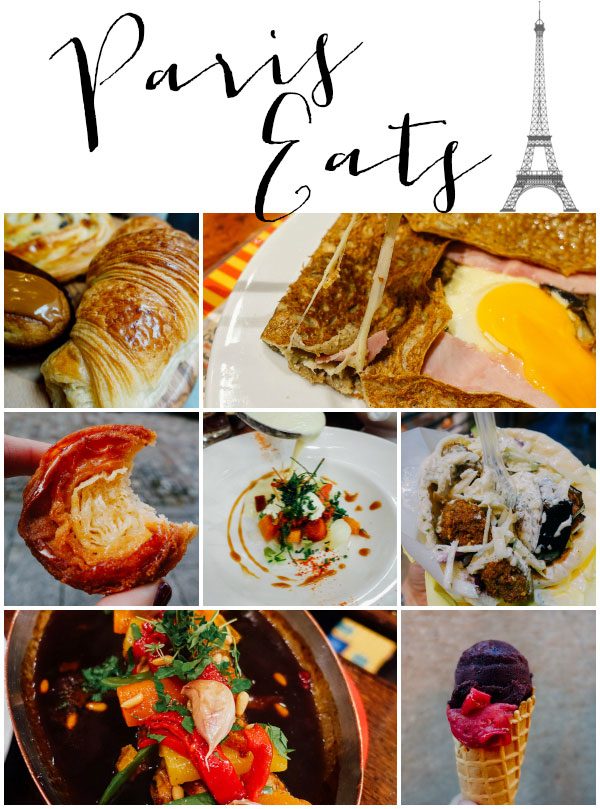 I can’t believe I was in Paris a little over a month ago! Time really does fly and it’s still surreal to me that my first time in France was also when the terrorist attacks in Paris happened. I am still thinking about that day and the victims.

I’m not sure you all know the backstory of why I went to Paris in the first place. Back in June, I entered a random recipe contest with Cono Sur Vineyards & Winery. The recipe contest was simple: submit a recipe and name a wine they produce that you think would pair well with your recipe. I don’t like contests, have never entered one, and I never win anything in lottery situations anyway, but I figured since I already had a recipe that I knew would work well with one of their sauvignon blancs, I felt that submitting the recipe was no skin off my back. I submitted it and thought nothing of it. I honestly even forgot about the whole contest until I got an email in October congratulating me about winning a trip to Paris to compete in the final competition. I totally thought it was a scam at first but then I dug through emails and remembered this recipe contest that I entered. Holy crap! I won and was representing the United States in this competition!

There were six other countries represented and one blogger from each country (and their guest) would be flown, all expenses paid, to Paris to compete for the grand prize, which was a 6-night, 7-day, all expense paid trip to Chile to visit the Cono Sur vineyards and winery! Jason unfortunately couldn’t come with to Paris due to work commitments but lucky Gina accompanied me to Paris. They flew both of us first class (umm, I don’t know if I can ever fly coach again, haha just kidding) and wined and dined us and showed us the beauty of Paris!

Gina and flew in two days before the competition and stayed an additional day after. So we had three full days to explore Paris (which ended up being only two days because the last day we were there, we were on lockdown at the hotel). I’ll have a separate post on what we saw but this post is all about what we ate! 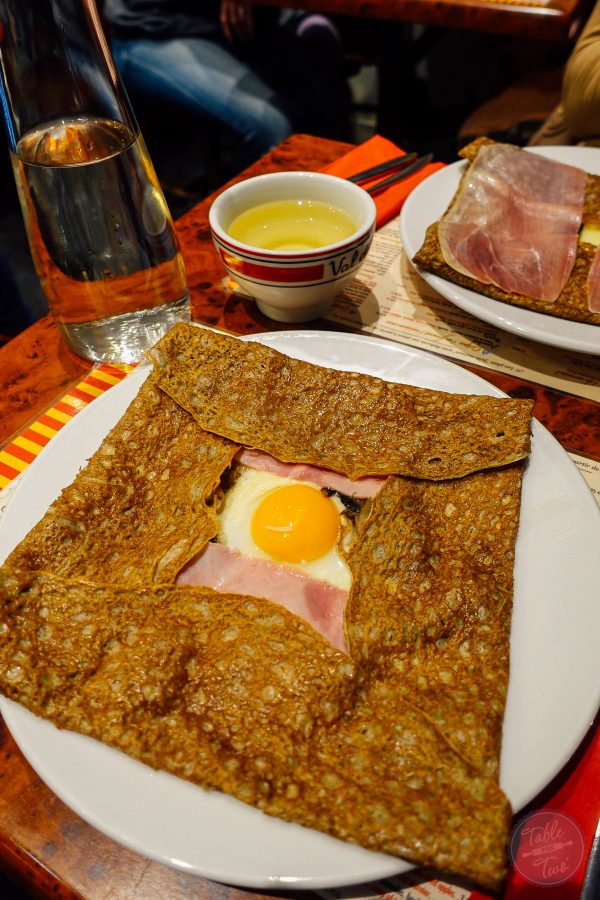 Of course I don’t remember the name of this creperie we went. We had been walking for miles and miles (we walked 9 miles the first day) and Paris has so many cute alleyways lined with cute cafes and boutiques. There was this little creperie in this cobblestone alleyway we walked down and the window to the kitchen was open and facing the street. The lady was making crepes in front of it and the scent was simply intoxicating. At that point, we were starving and as soon as we read the menu, we snagged a seat inside.

I didn’t realize crepes in Europe looked like the above photo. I pictured the folded triangles that we do here in the United States or even the rolled up rolls. We also chose this place because instead of regular flour, they used buckwheat flour for their crepes! Which is why the crepe is a brown color than the standard yellow-ish color. My crepe had ham, gruyere, and an egg on top. It was the perfect light meal to tide us over for the rest of our sightseeing that day! 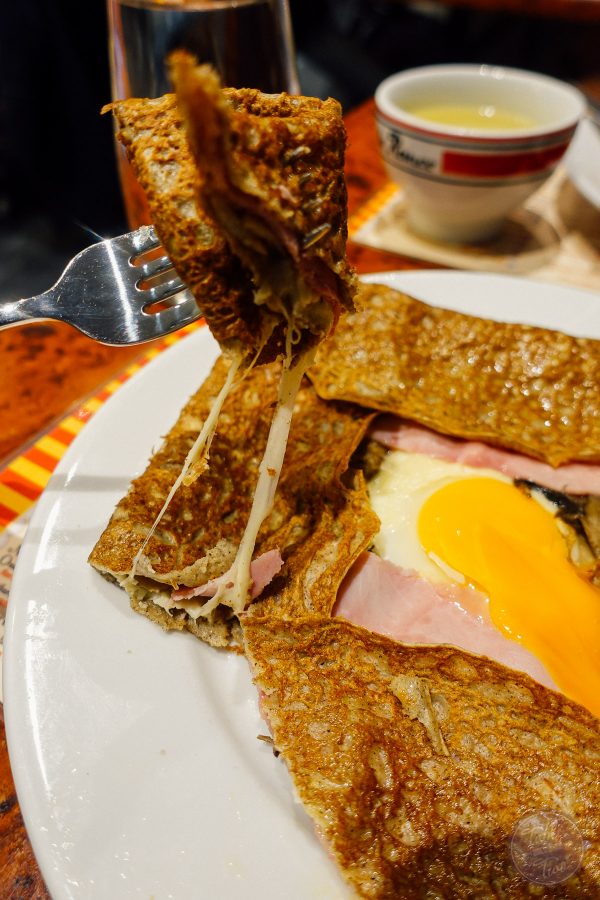 Down the street from where we had crepes, we stopped into this cute little bakery called Maison Georges Larnicol. They had so much chocolate, pastries, and a grand display of macarons in there. 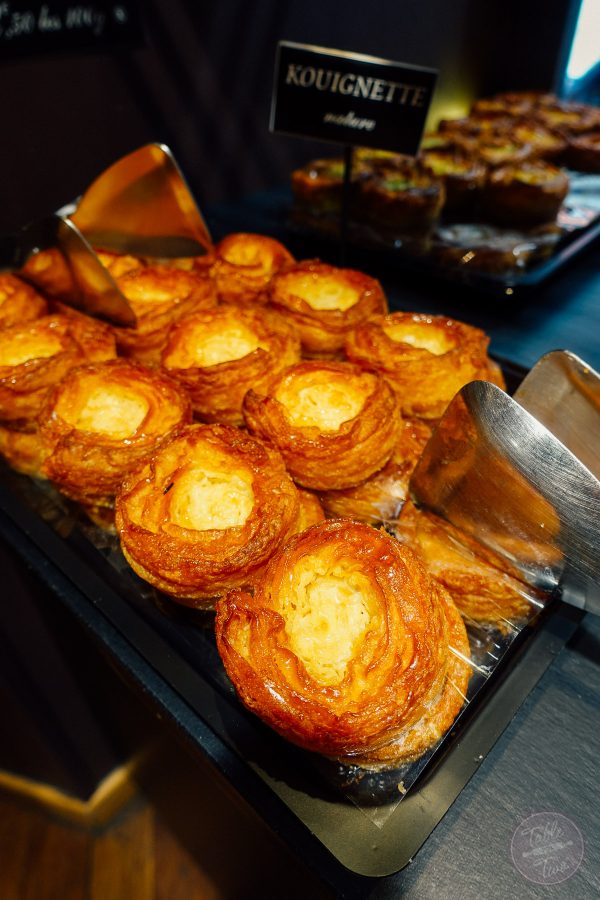 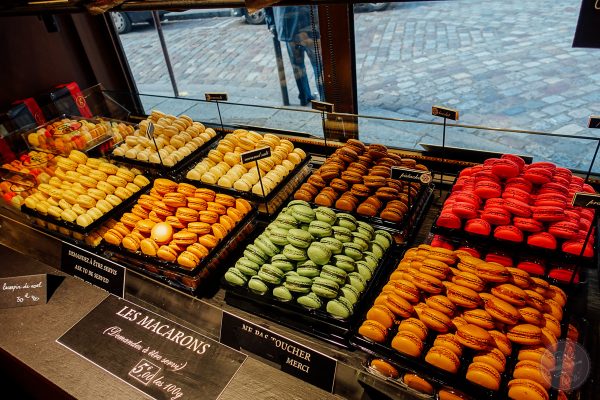 We left with some macarons (omg coconut flavor was my fav) and I got this kouignette, which is basically a baby kouign amman. A kouign amman is a Breton butter pastry that has layers upon layers of butter and sugar folded together and when it’s baked, the sugar caramelizes on top. I heard all about the kouign amman before coming to Paris and heard I had to try it if I ever found it! It was pretty delicious but man, it tasted like I was eating a stick of butter, haha 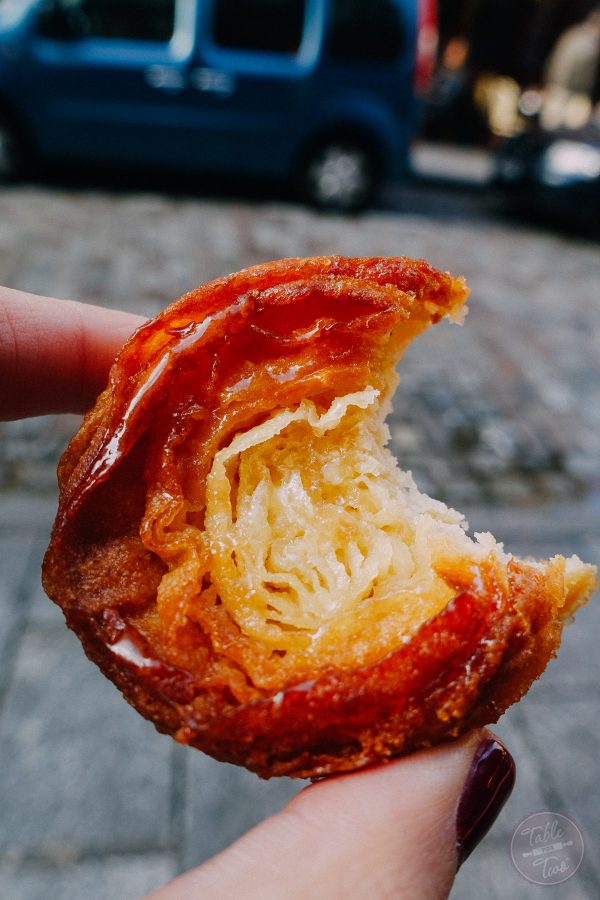 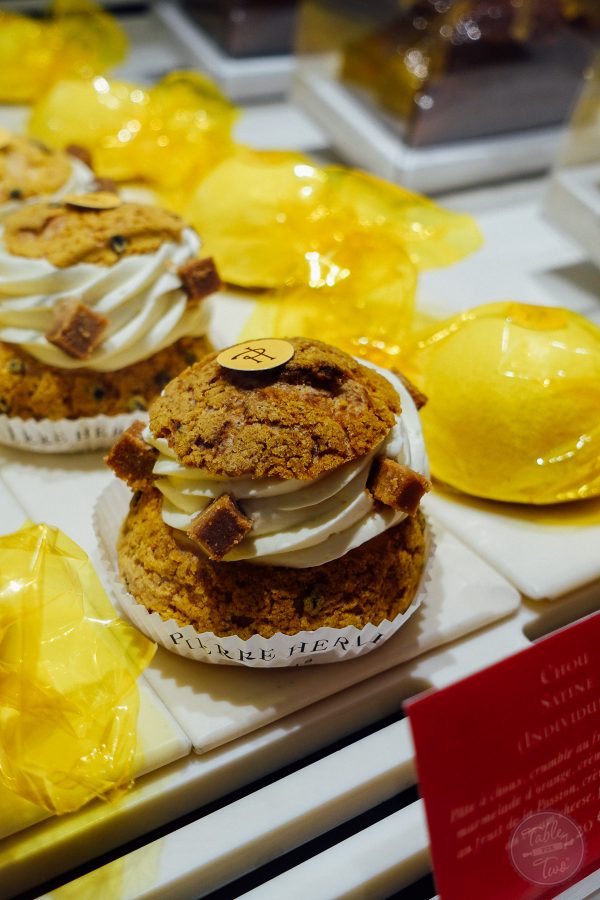 Whatever you do and whatever you have plans for in Paris, you must add this falafel shop to your list. It’s called L’As du Fallafel. I know, you’re in Paris and I’m telling you to eat at a falafel place. TRUST ME. It’s SO good and worth the wait. Luckily, when we were, it was a weekday evening so there wasn’t much of a line but I heard (and have seen various photos) that the line can be looooong. Just be patient and know that it’s well-worth it. And don’t be tempted to go to the one right across from this one. It’s not as good :) I will say, the one thing with L’As du Fallafel is that you have to ‘buy’ a ticket from a guy standing in front of the falafel shop. Seems a bit sketchy but it’s just how they do it. It’s basically so they aren’t handling money with your food. You pay, get your ticket, and hop in line. Get everything on your falafel sandwich. Ahh, I’m still craving this!! 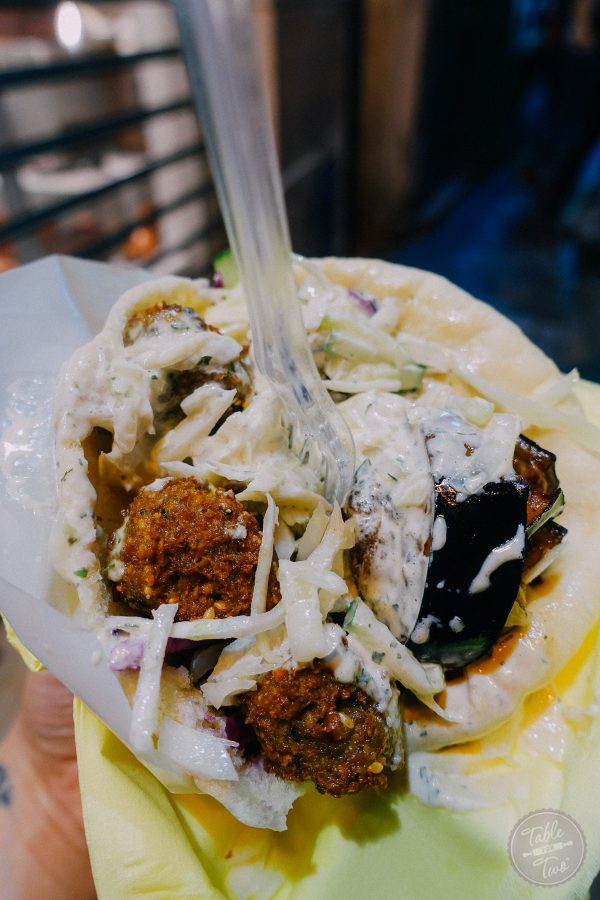 The next day, we did some more walking and sight-seeing. My friend’s sister who used to live in Paris told us that we had to go to this boulangerie she used to live near. She claimed it had “the best pain raisin of all the millions of bakeries in Paris.” Well, that is one way of getting us to trek over there. It was definitely a lonnnng trek and by the end of it, we were thinking that this really better be a damn good bakery, haha…I didn’t end up getting the pain raisin because I don’t like raisins in baked goods but Gina got it and I had to get a croissant because up until this point, I still hadn’t had an authentic Parisian croissant! I also spotted a cafe eclair and you know how I feel about coffee flavored pastries! So I had to get that too :) they were all AMAZING and the croissant was just wow. So light and flakey and the layers of butter! 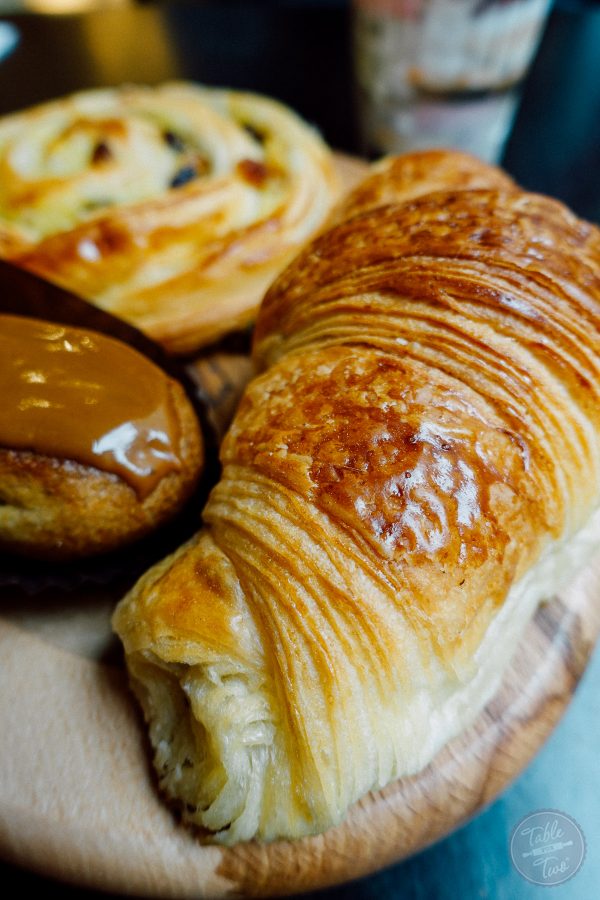 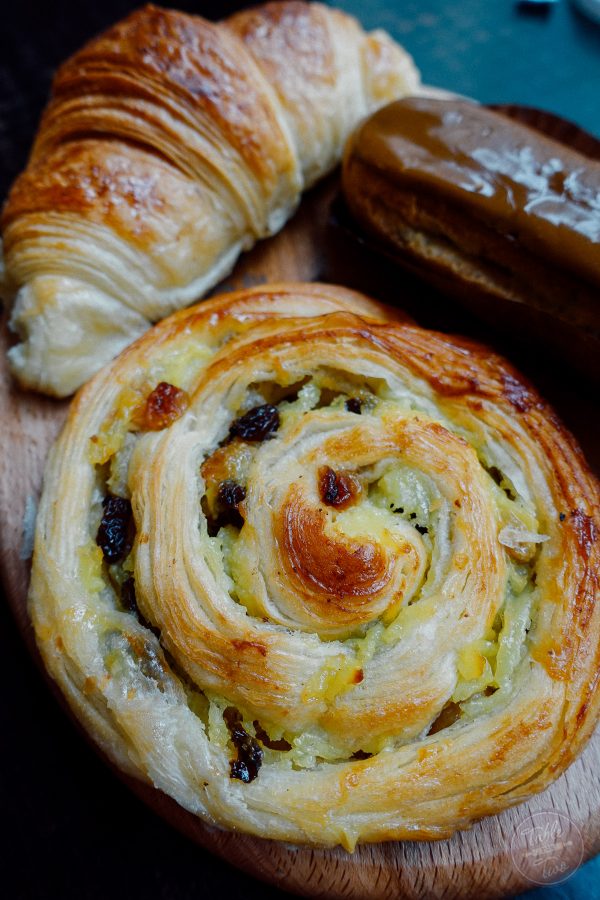 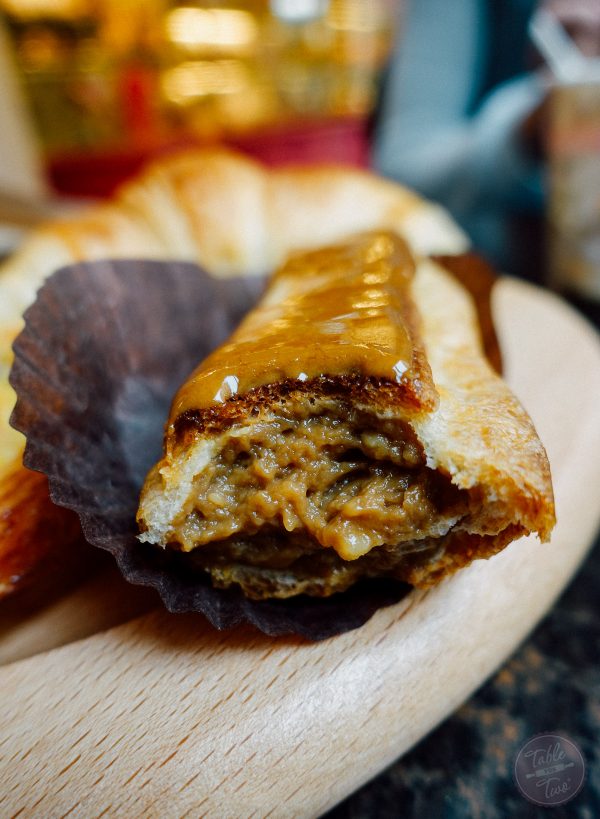 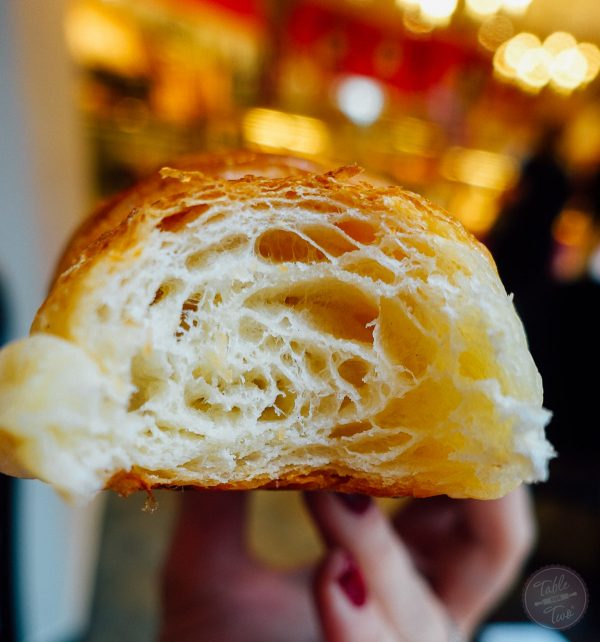 I now introduce you to the best meal we had in Paris. Les Papilles. Erin suggested this restaurant to me and I emailed them and reserved us a table (definitely email them – they get back to you within 2 days..it’s the best way to do it!). For dinner, it’s a 4-course meal with no menu. Well, there’s a menu when you get there but it’s whatever the chef chooses to serve you and it’s kind of my favorite way to have a meal. They never disappoint and it’s always fresh because it’s made with local and fresh ingredients they source that day.

The wine situation was pretty awesome, too. Along the walls, they have hundreds of wine bottles and that’s how you choose your wine. They don’t have a wine menu; you walk around the restaurant looking at the wall for your wine. Of course, you can ask for suggestions too to pair with your meal. 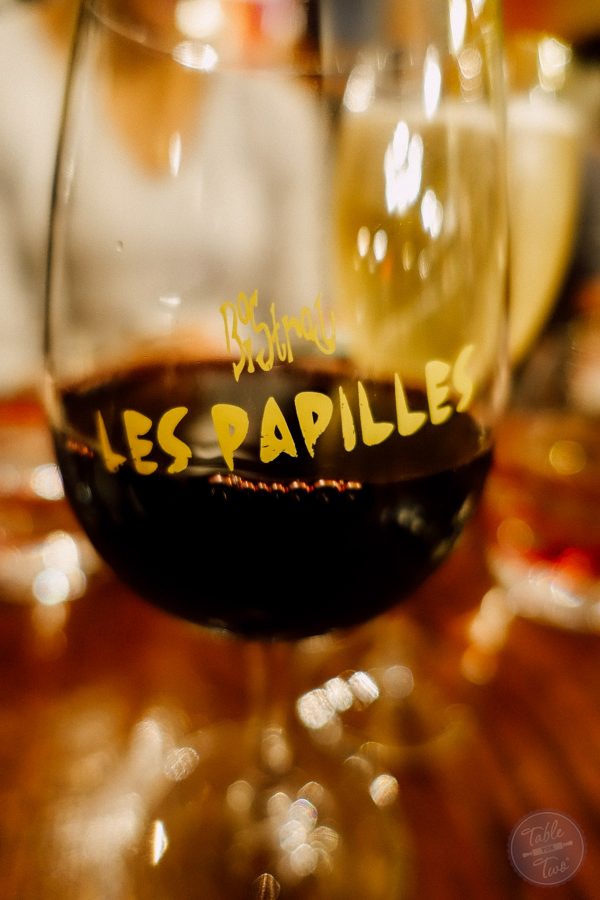 This was our starter. A giant bowl of potato leek soup with toasted croutons. I could’ve drank the entire vat of this. The bowl had a serving enough for 4-6 people. We didn’t want to fill up on this soup but it was also kind of hard to stop drinking it! 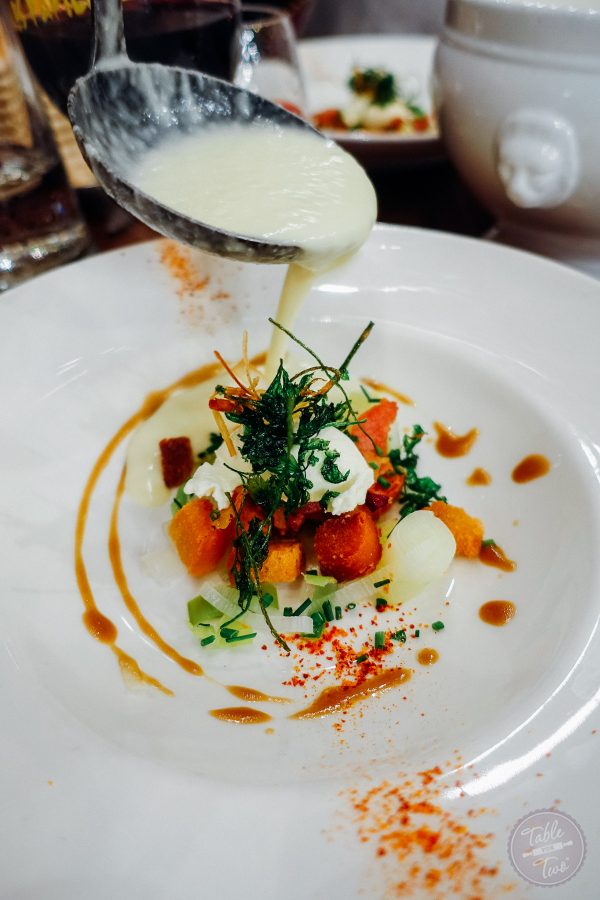 Our main course was a pork filet. So tender and cooked perfectly with tender vegetables and dried apricots. The sauce was so flavorful! 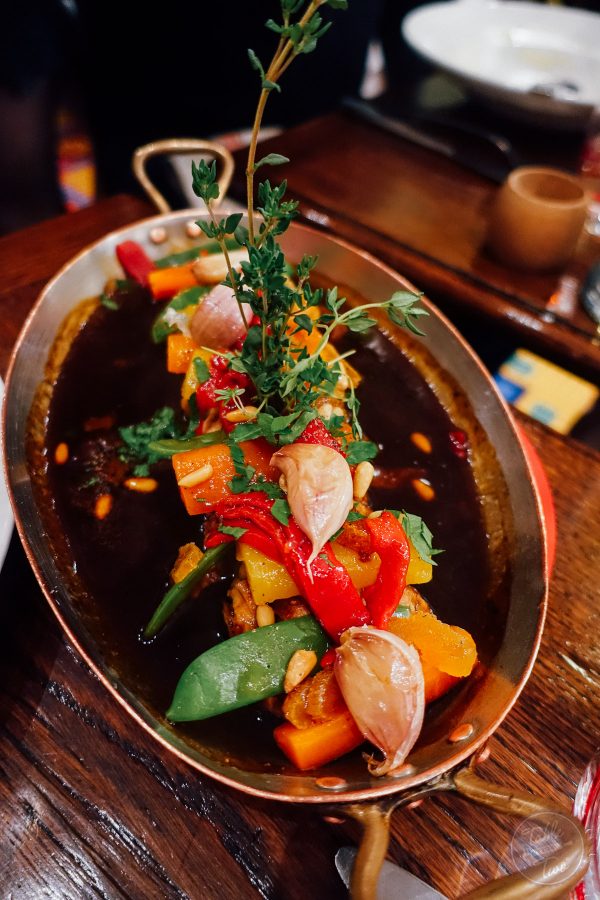 This was a cheesy polenta side dish that accompanied our meal and it was sooo good. Super rich but so delish! 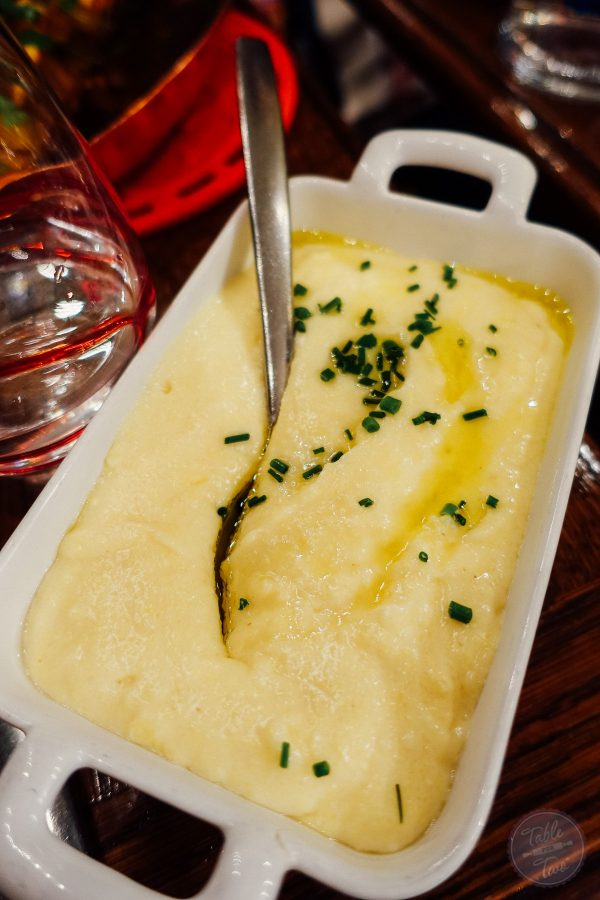 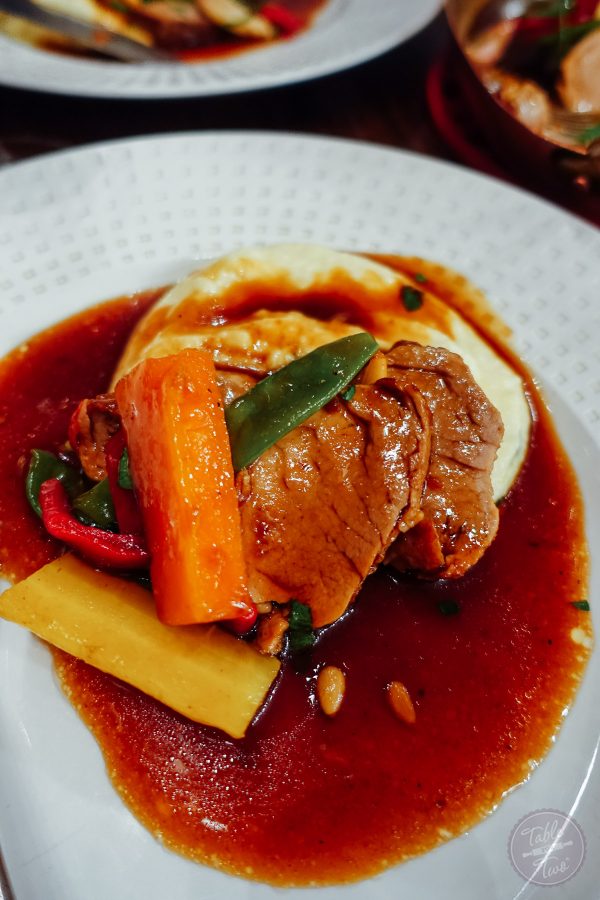 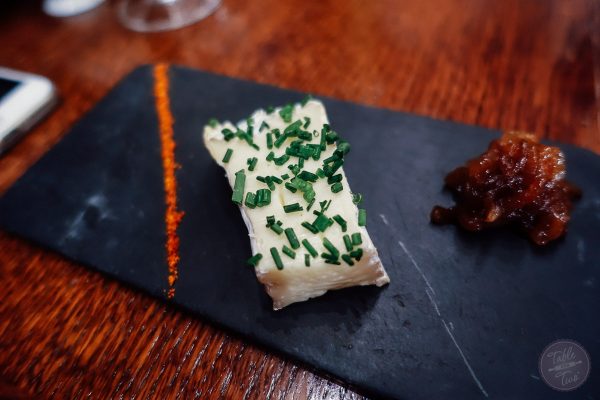 Omg, I thought I hated panna cotta but then I had this one from Les Papilles and I’m a new convert. It tasted like Fall in my mouth. I think the bottom was some sort of apple cinnamon compote. Gah, so good! I am literally still dreaming about this entire meal. You must make a reservation if you’re ever in Paris! 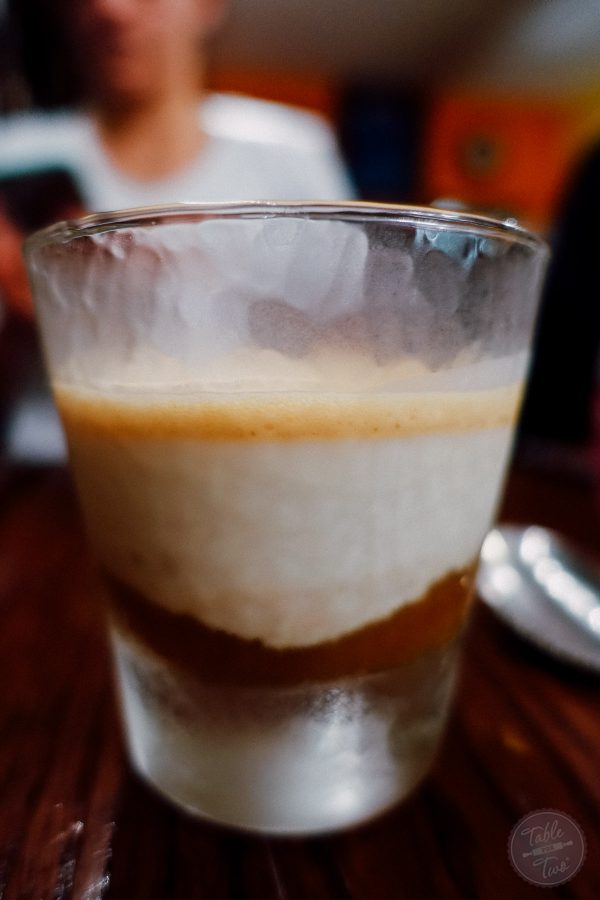 Our hotel was really close to Paris’ original gelato place, Berthillon. They had a daily menu with all the flavors and there were so many awesome flavors that you rarely ever see in the States. For example, fig sorbetto?! Gina got rum raisin..omg so good! 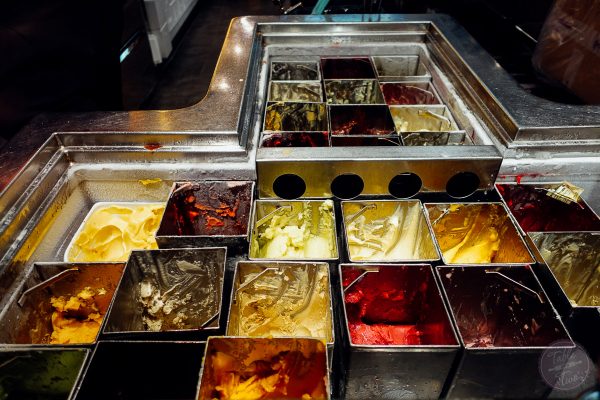 I ended up with mixed berry and fig. So good. The portions in European countries are ‘smaller’ than American-sized. I put ‘smaller’ in quotes because it’s not really that small. I think we are just used to over abundance of food (re: cheesecake factory). 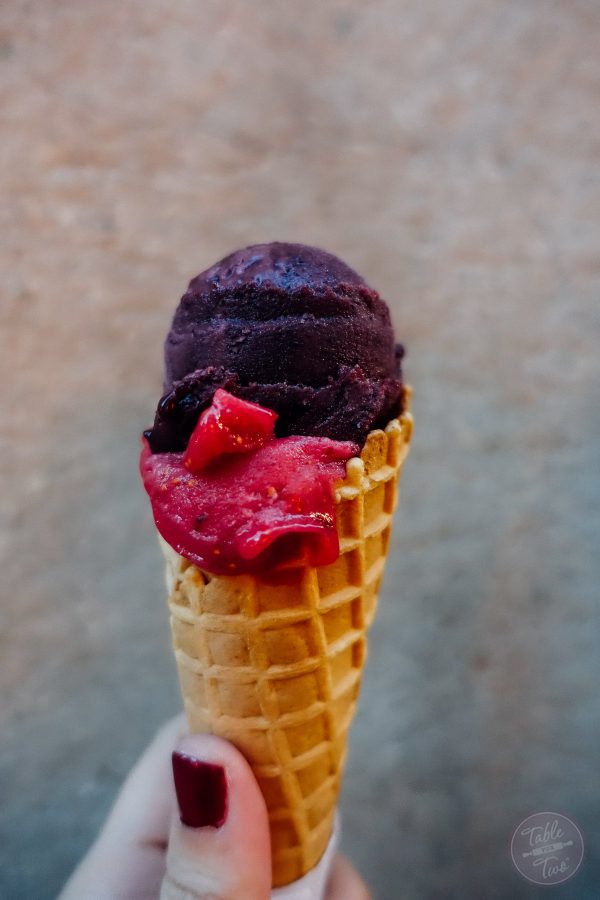 So, our last night there, we had reservations to go to Breizh Cafe, a very-well known Brittany creperie. The owner is from Brittany and has opened up a storefront that serves buckwheat galettes (savory crepes) and dessert crepes. Apparently it’s always super busy so reservations are great to snag if you can. Well, we never made it there because that was the day after the Paris attacks and we were basically on lockdown in our hotel room the entire day. We finally mustered up enough courage to venture 30 seconds down the street of our hotel to a vegetarian restaurant on the corner called Gentle Gourmet Cafe. We both thought we could use some veggies in our diet so this was a perfect choice. Below is a beet salad that Gina got for us to share. Simple and good flavor. Gorgeous presentation. 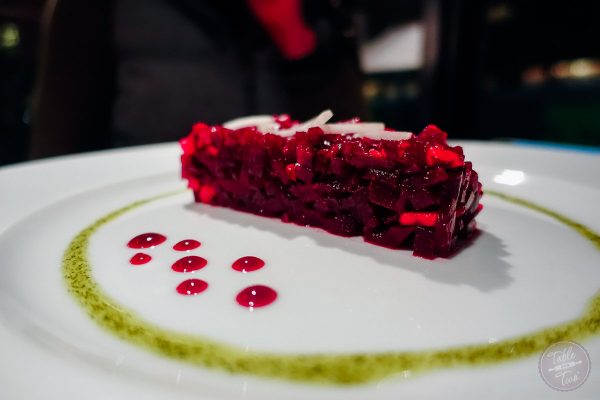 We got green juice cause we were really craving veggies after not eating much on this trip. 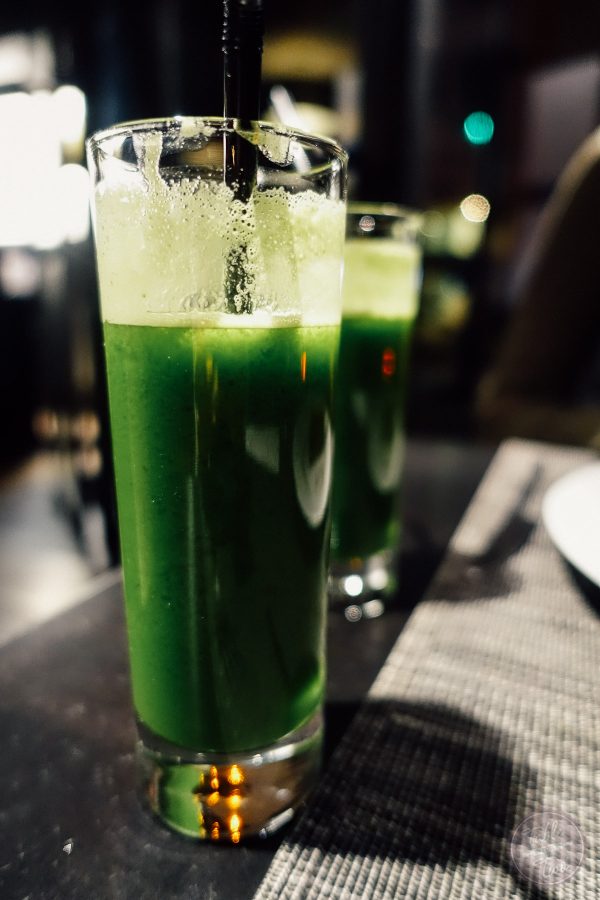 I got this portobello burger with arugula and some other vegan spicy mayo. It came with potatoes and coleslaw. Pretty tasty for being vegan. 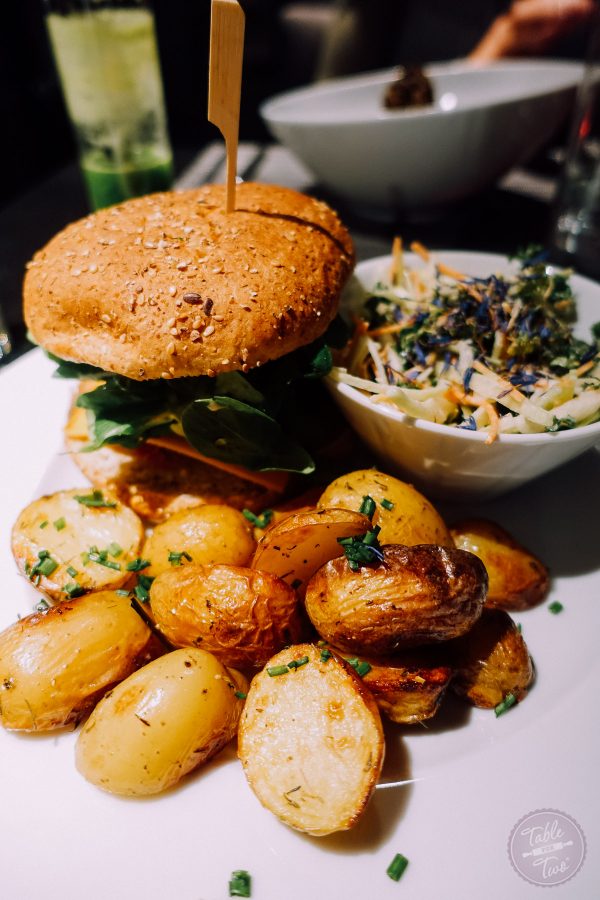 I had dish envy with Gina’s entree. Look how gorgeous that is! It’s tofu crusted in colorful sesame on a bed of rice noodles. 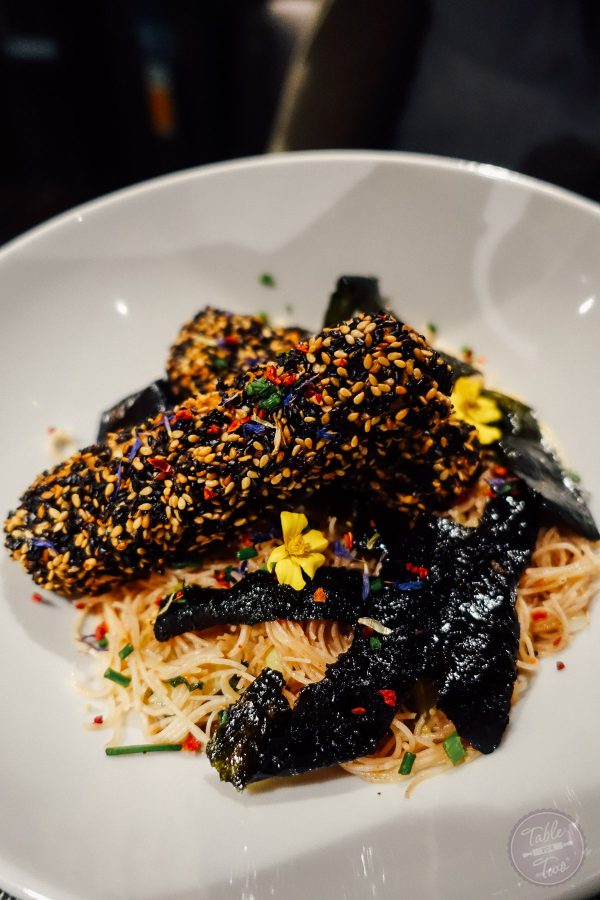 I thought I’d share with you my competition photos, the real reason that brought me to Paris! We cooked/competed in this culinary kitchen somewhere in Paris. I honestly couldn’t tell you where this was. We just got into vans and they drove us there :) 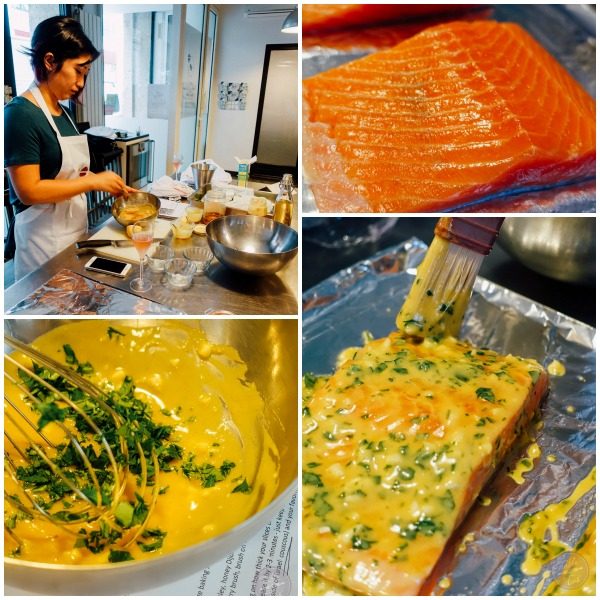 Here is my final product! Although I didn’t win the grand prize, a trip to Paris was the best consolation prize, ever! I had so much fun and met so many sweet new friends from other countries around the world! I hope we all stay in touch :) 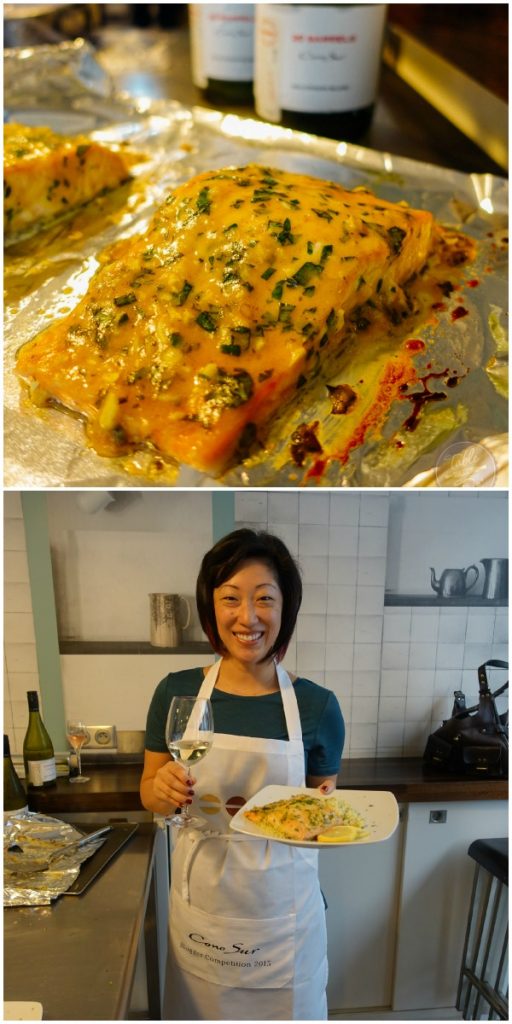 Stay tuned for another Paris post…next, instead of eating, I’ll be showing you where we stopped along our 9 miles of walking every day! Haha

French couisini is certainly brilliant. it's worth going to France for the food alone, and then there's the wine and the views. Love your photos, everything looks so delicious

Wow, major food travel daydreaming going on in my brain! That tofu crusted in colorful sesame is so beautiful!

Im in a food coma just looking at your pictures!

YAY! So excited that you guys got to experience and loved Les Papilles. This post makes me want to rush back to Paris ASAP.