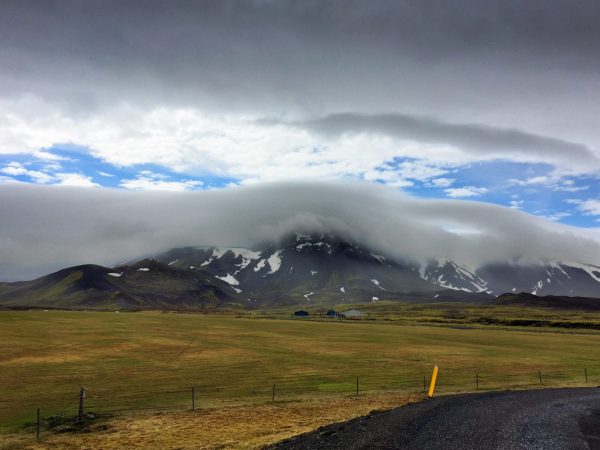 Early morning, we packed our bags, walked from the studio to grab our daily cuppa and then got in our car (and filled up on gas) and started to make the drive along the Ring Road (road 1, the main road in Iceland) to go south to Vík!

Let me just tell you, from one nervous Nancy to another: don’t overthink this and don’t freak out because we encountered none of the above. We never ran out of gas, we never had an issue getting gas. We passed several gas stations along our way down and like I mentioned before, since most of your drive is high speed on an open road with no stopping and going (traffic), you really don’t use up that much gas anyway. I still made Jason get gas whenever we reached half a tank but there was never a time where we made it to a town and couldn’t get gas. Not sure if this works with every card but with Jason’s Capital One Venture card, even if the machine asked for a PIN, we just pressed ‘enter’ and it let us purchase gas. I had my Navy Federal Flagship Rewards credit card and with Navy Federal, you can set a PIN on your credit card in case a merchant doesn’t do chip and signature then it defaults to chip and PIN. Super convenient because a couple times, we couldn’t bypass the ‘enter’ with Jason’s card so we stuck mine in and it allowed me to use my PIN. Basically what I’m trying to say is: gas is not an issue along the Ring Road. Just keep an eye on your gas tank and you’ll be fine! Oh, and Iceland gas stations are a bit different in that they ask you how much gas you want to buy. We learned that about half a tank is 5000ISK but what we usually did was pushed the button for ‘fill tank’ which basically, like in the U.S., puts a dollar amount hold on your card and then once your purchase is complete, a couple days later, it changes to what you really purchased. Therefore, I recommend using credit cards and not debit cards at gas stations.

Okay, now that we have the gas talk out of the way…

In the mornings, it’s usually always super foggy or cloudy and then the fog burns off when the sun comes out (or sometimes not at all if it’s going to be a cloudy day in Iceland). On our way down, we saw this mountain. Its peak completely engulfed in a cloud. Little did we know, we ended up having to drive through that thick cloud/fog a few moments later. You could NOT see anything ahead of you and it was kind of scary because it was soooo dense and you were driving down a mountain. On our way back from Vík, it was a clear day and we were able to see what exactly we were driving on. Haha, pretty scary that we made that drive in the fog!

Okay, so today, as I said, we were making our way down south to Vík, which is the southern most point of Iceland. Super cute town. Very small. Along the way these were the stops we made: 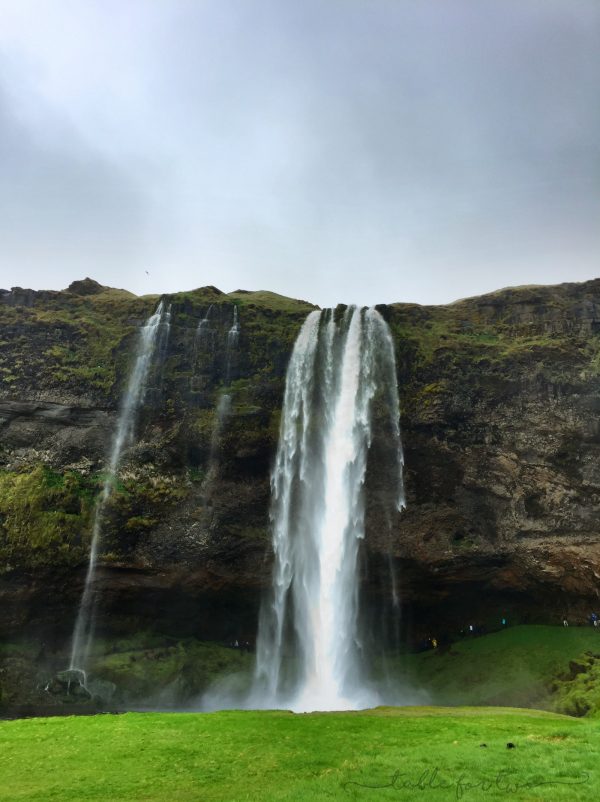 It was so cloudy/rainy/windy when we arrived at Seljalandsfoss. This is one of the waterfalls where you can walk behind it. If you see those colored specks in my photo, those were people walking behind it. People were walking back to their cars completely drenched. Since we had a long day ahead of us, we didn’t want to get wet nor be freezing so we opted to not go behind the falls. 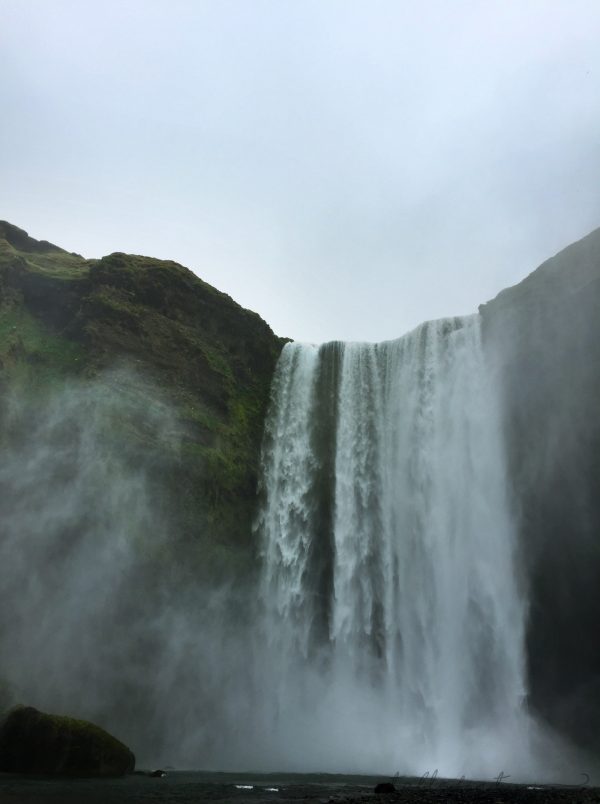 Next, another quick drive up road 1 was Skógafoss. This one, I was able to get super close to it and not get soaked. I mean, the mist still clung on everything but I wasn’t drenched. They have this huge staircase leading up to the top of the waterfall if you so choose to climb it. We did not have time to do that. We were cutting it really close to the time of when our glacier walking tour was so we had to leave almost immediately taking photos of Skógafoss.

If you go to Iceland, one guided tour I highly recommend is the glacier walking tour. There are so many glaciers around Iceland and Sólheimajökull is just one of them. Sólheimajökull is the glacier tongue or “fingers” of the Myrdalsjokull icecap. Going on this was unreal you guys. When we first started climbing it, I was like, “wow, this totally looks like something out of the movie Interstellar.” Um, our guide told us they filmed parts of it here!! And also some James Bond movies and Batman. 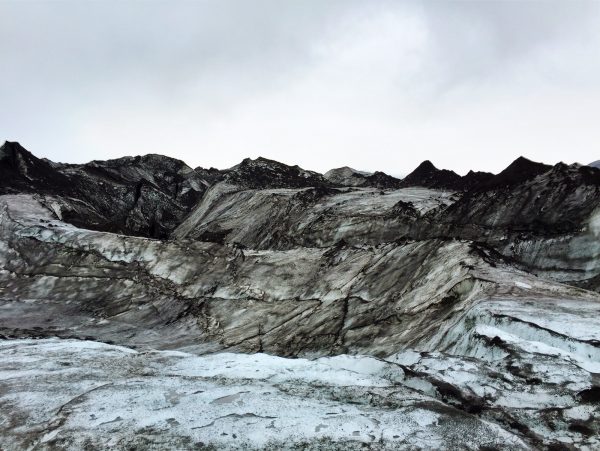 The reason why the bottom parts of the glacier is black is because it’s covered in dirt and volcanic ash. 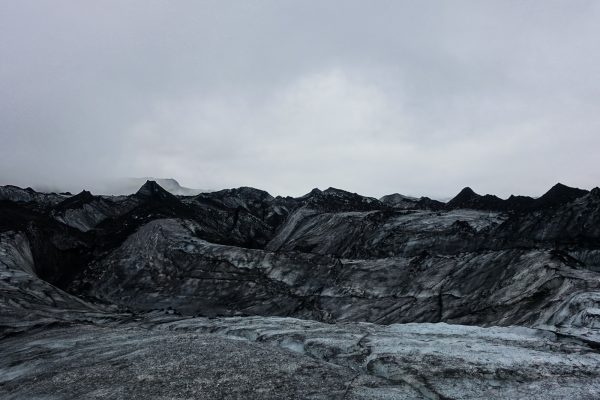 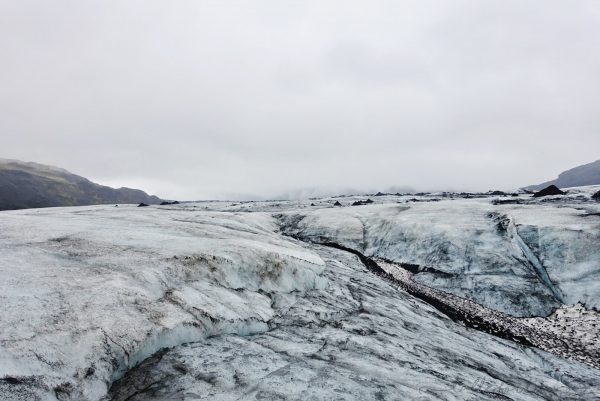 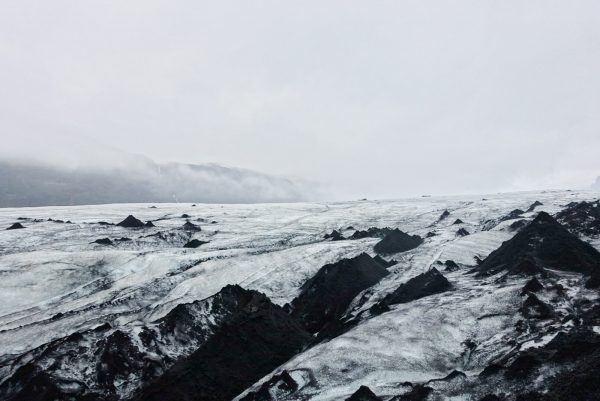 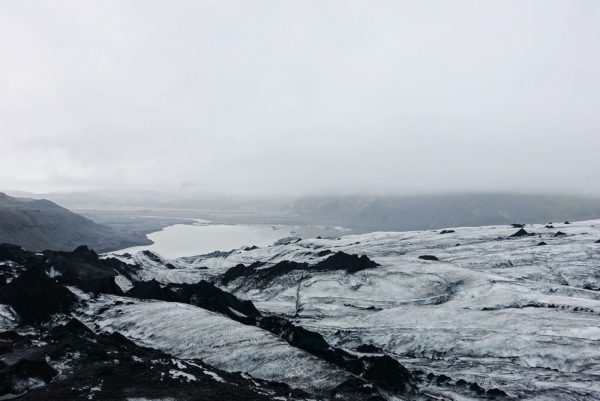 Our guide, Jan, took us into this ice cave below. It doesn’t LOOK like much but it was really deep down. I was like freaking out the entire time thinking it was going to collapse on us but he’s obviously the pro and he’s the one that looks for this kind of stuff before telling us we can go down there. So, I felt safe with him. 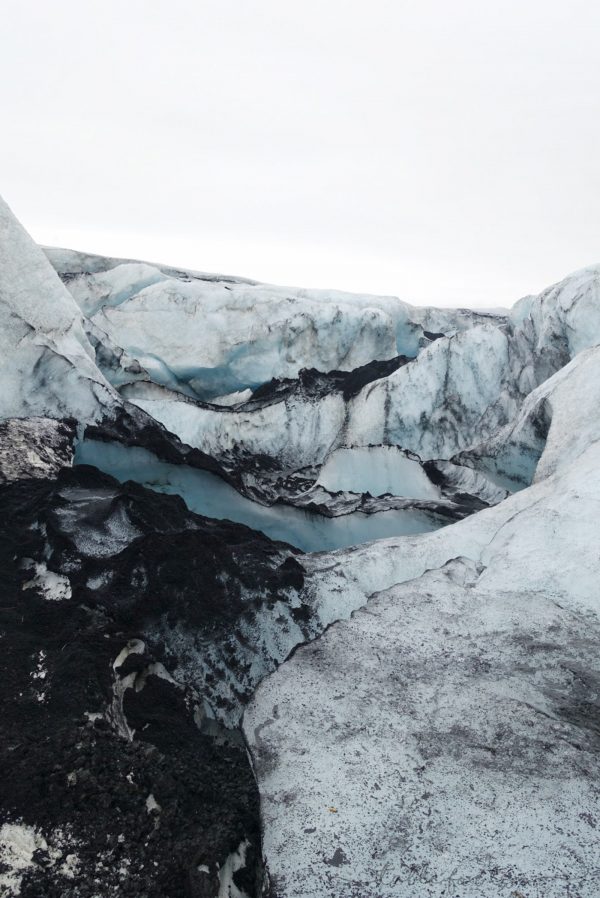 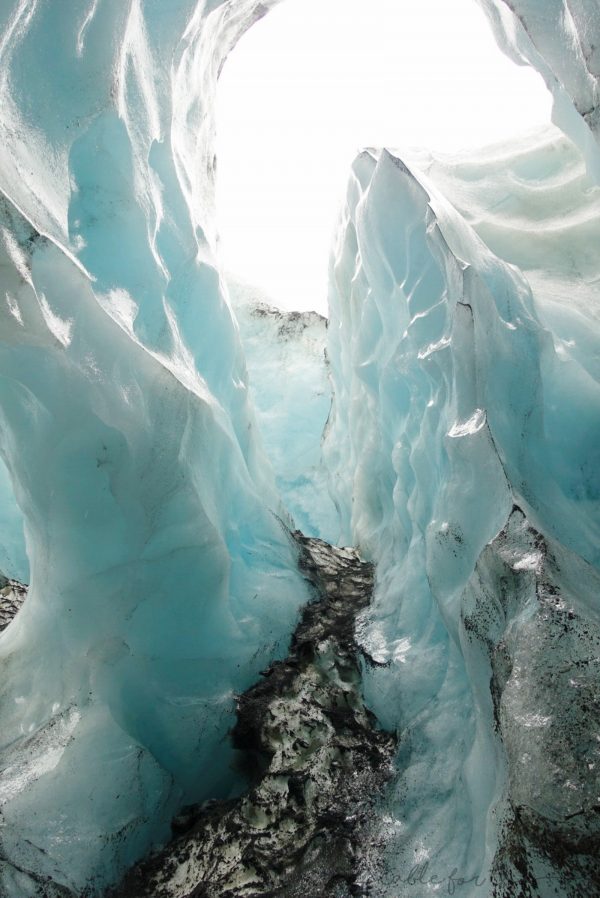 The glacier walk was about 3.5 hours and it was so worth it! Definitely bundle up for it. They provide the crampons and ice pick. I was able to drink fresh glacier water at the top (it was a running stream, omg so icy cold and fresh!) and lick a glacier inside the cave! 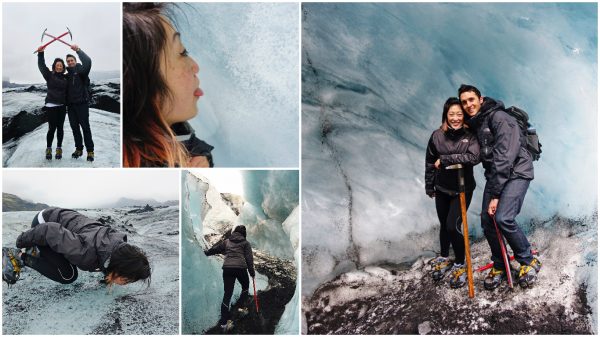 We spent the night in Vík and it cleared up that evening to what you see below. So pretty! We stayed at Hotel Edda Vík which is attached to Icelandair Hotels. The buffet breakfast is REALLY good and although expensive (what isn’t expensive in Iceland?), it’s well worth it. 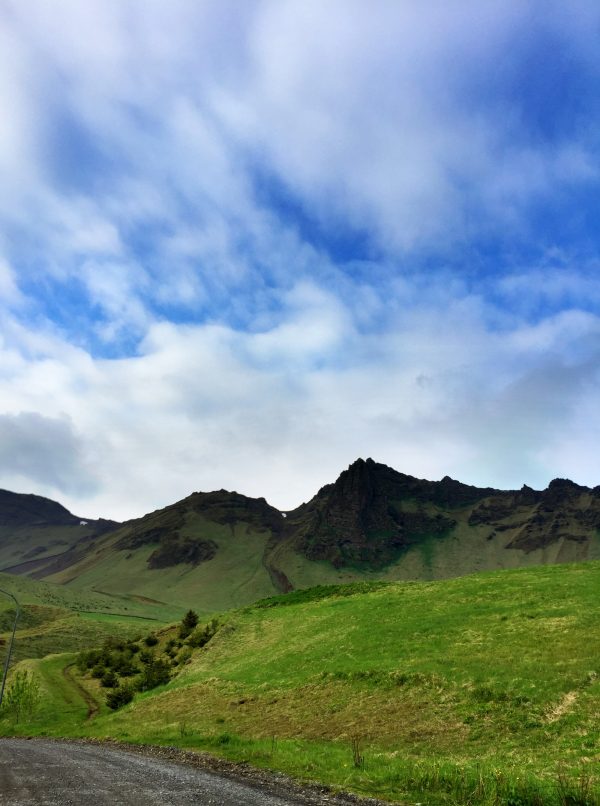 So Vík isn’t a big town so there wasn’t that many food options to choose from for dinner. That is a good and bad thing. Luckily, there were many places in the vicinity of our hotel that had great reviews. We stopped into Sudur for dinner and we were starving and everything looked so good. We each got seafood soup (which had really amazing flavor) and we each got pizza and beer. Pretty standard fare, right? Well, in America, I feel like it would’ve been a $50 dinner. Lol, it was $104 in Iceland. Yup. Nothing is cheap there, especially food!

Oh, I should also mention they don’t have Yelp in Iceland. They’re all about TripAdvisor so download that app before you go :) 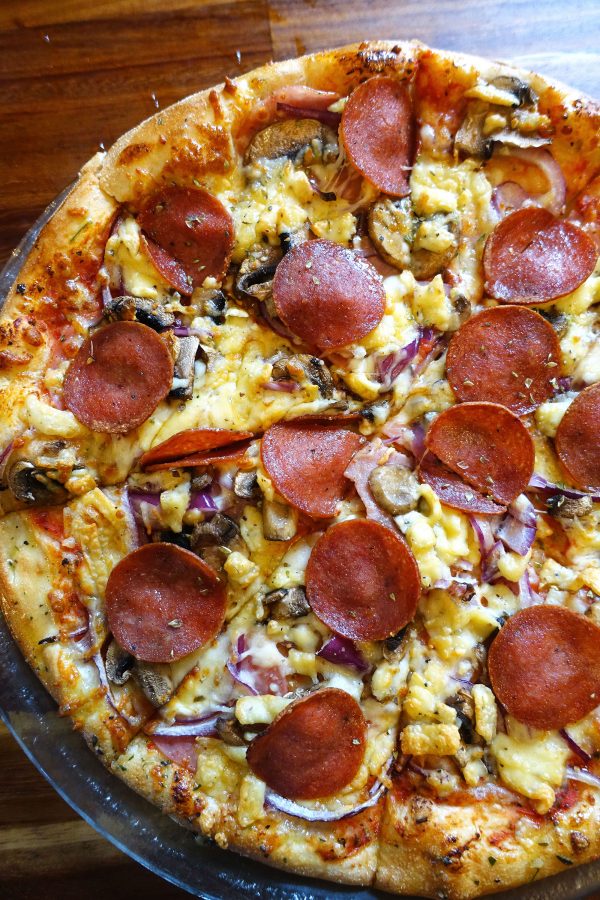 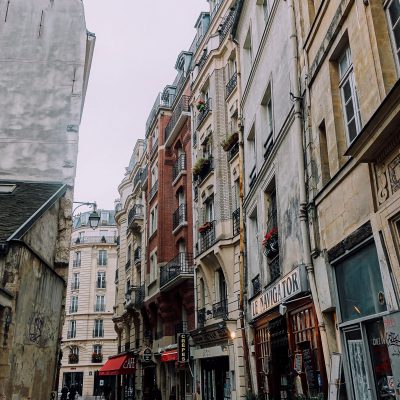 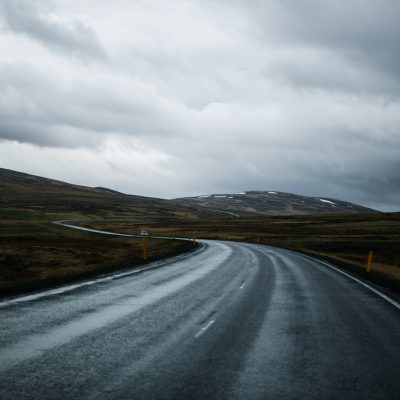 Iceland in 5 Days: The Golden Circle 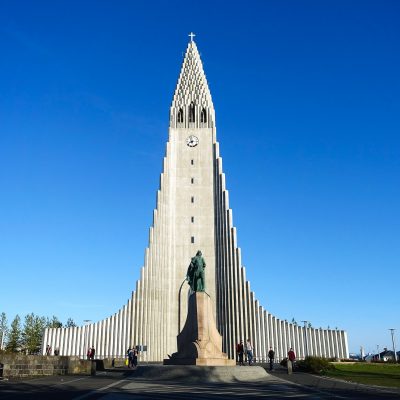