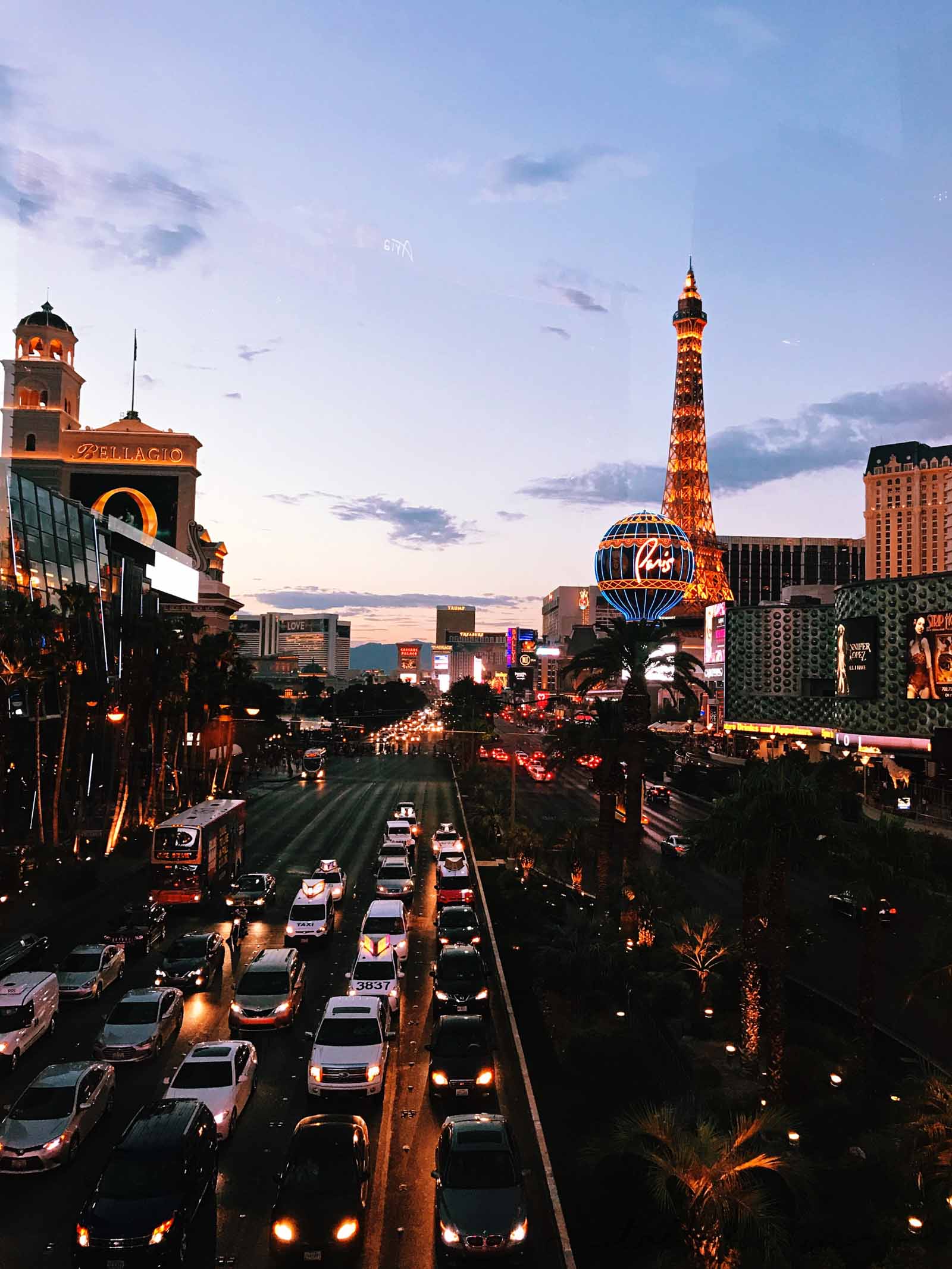 Last month, Brandy and I went to Las Vegas for a quick weekend girls trip. It was for one sole purpose, though. The Backstreet Boys Concert. YES, WE WENT TO THE BACKSTREET BOYS CONCERT.

You guys, this was me reliving childhood and it was so *insert expletive* amazing. Like, I can’t even put into words how happy that night made me. It made the 115 degree heat worth it. I may have cried, waved to them like a kid, and screamed a little too much. Whateverrrrr. I am so not afraid to admit this, haha

HOWEVER, the Las Vegas food scene was pretty good. Albeit expensive (what in Vegas isn’t expensive?) but it was still delicious and I got a bunch of questions/requests on my Instagram to make a list of everywhere we ate so here it is!

Basically right when you walk in from the bridge, you’ll see Eggslut (and Milk and Momofuku). I had Eggslut in LA and knew I had to go back. I love their egg sandwiches and albeit simple, they’re just so delicious (especially after a five hour flight). 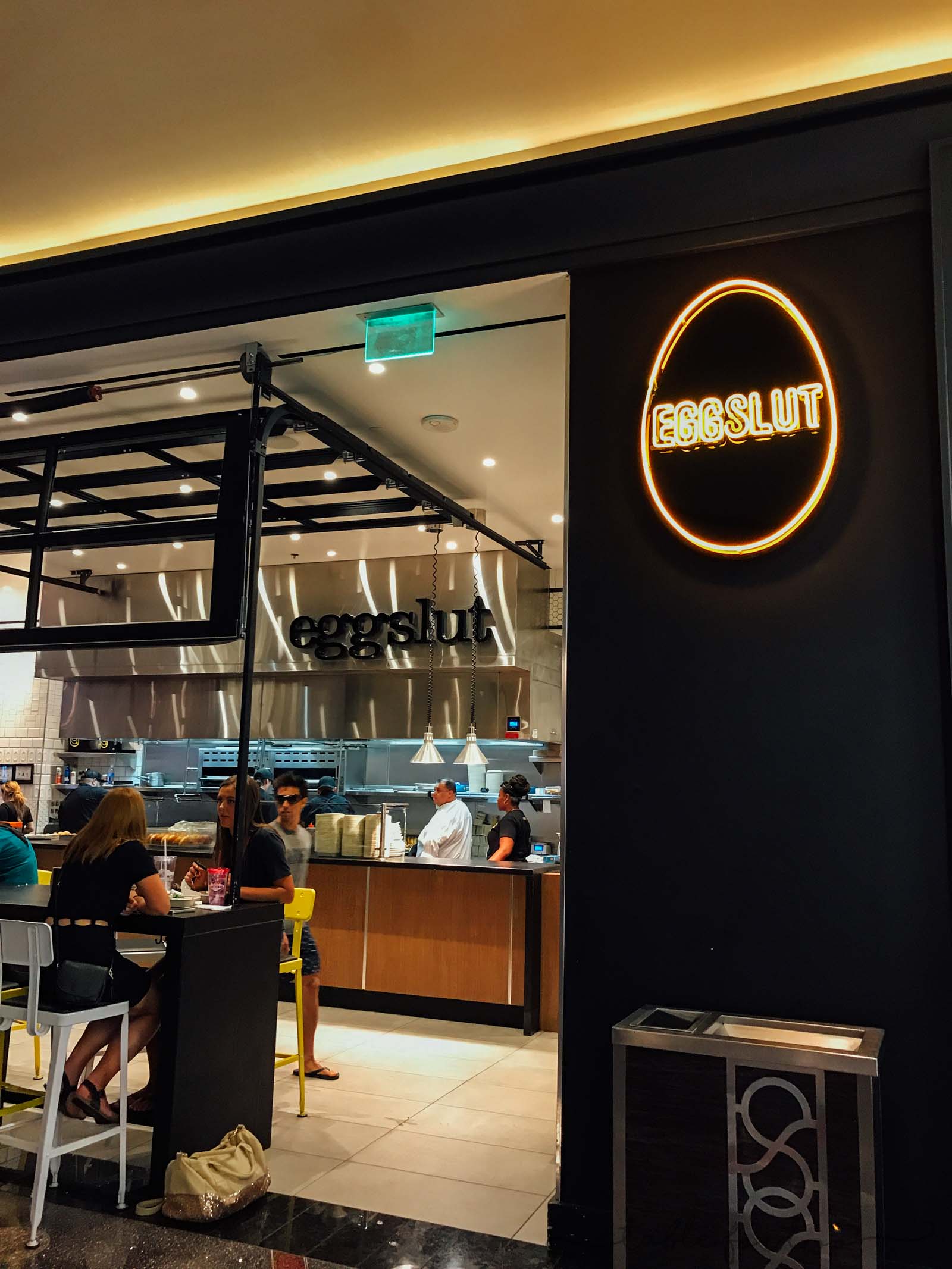 Lotus of Siam — MAKE RESERVATIONS AND DO YOURSELF A FAVOR AND GO.

Oh my gosh. This was like the best Thai food I’ve had. And there is a hype for this place but it lives up to it.

It’s off strip so you’ll likely have to take an Uber/Lyft/cab there but we were lucky that we had our friend Shanna pick us up and take us. 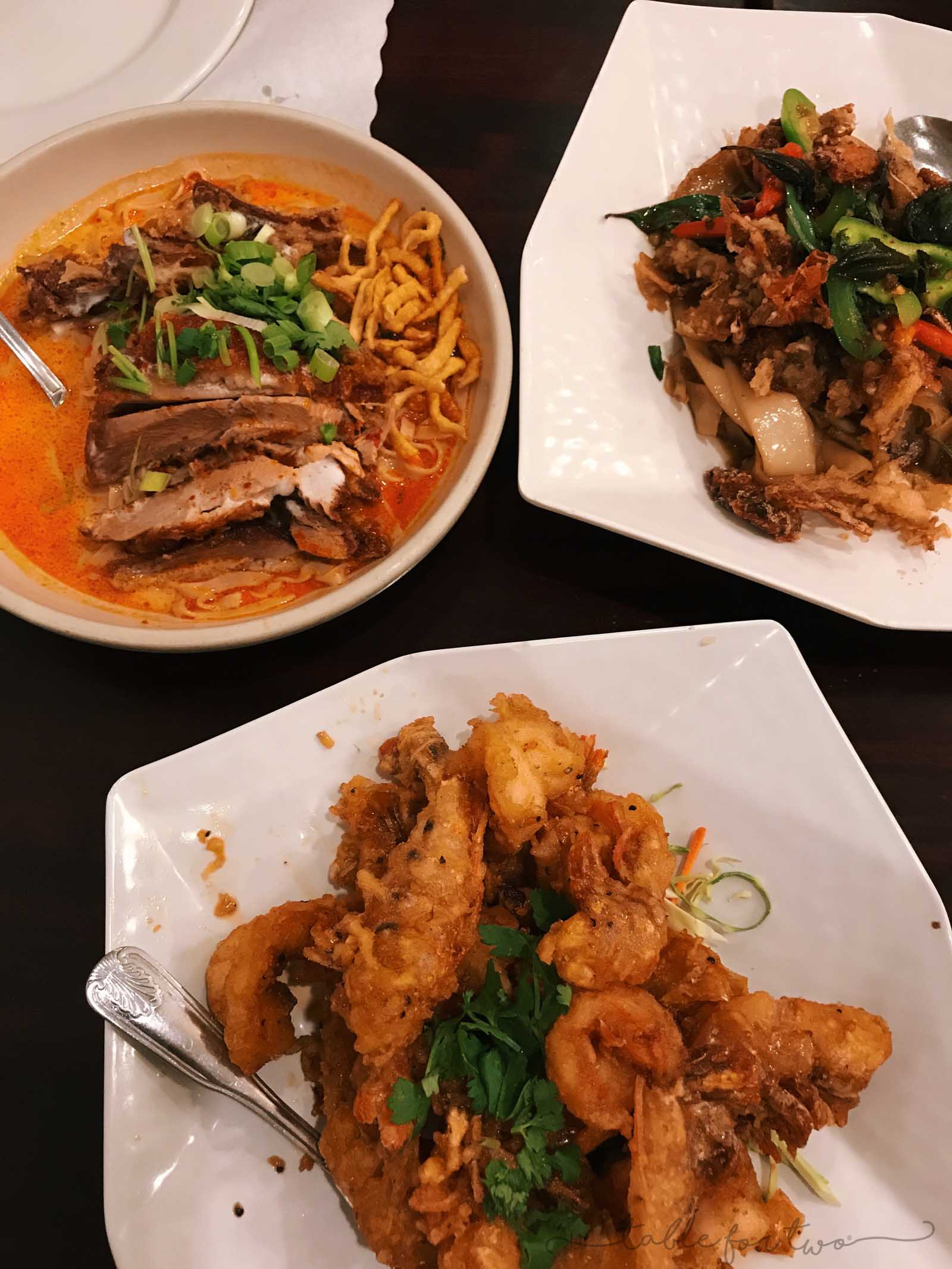 We ordered their famous garlic prawns, the soft shell crab drunken noodles, this epic duck noodle dish (below), and this beyond amazing green curry. I didn’t get a photo of it but omg, we devoured it and couldn’t stop eating it. I also liked that for the dishes that had heat/spice, you could choose a spice level from 1-10. My tom yum soup that I ordered, I did a four and it was the perfect amount of heat for me. 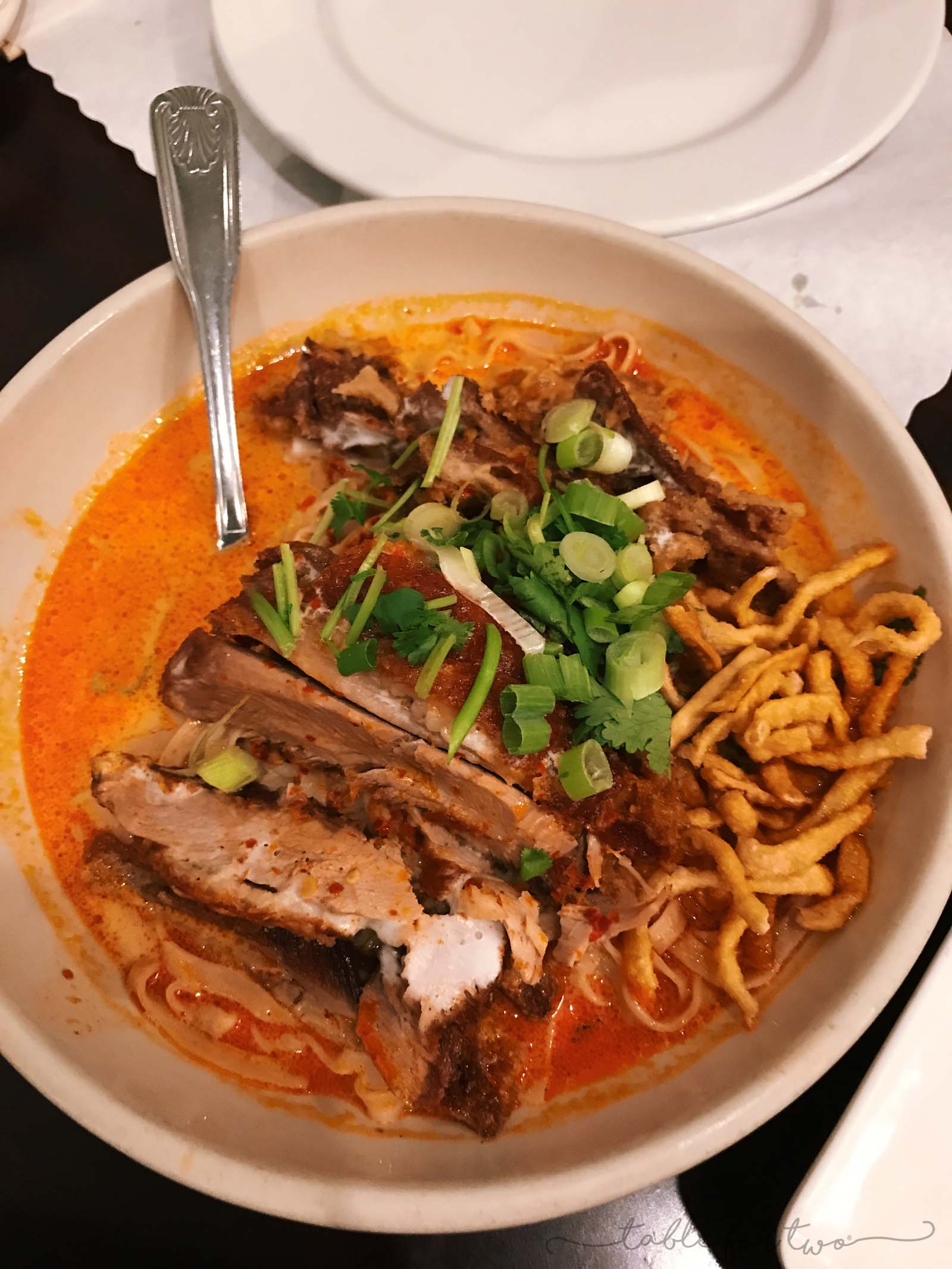 The next morning, after we had a belly full of delicious Thai food, we woke up early (because of the time difference) and since it wasn’t TERRIBLY hot yet, we wandered out on The Strip and went to Bruxie! 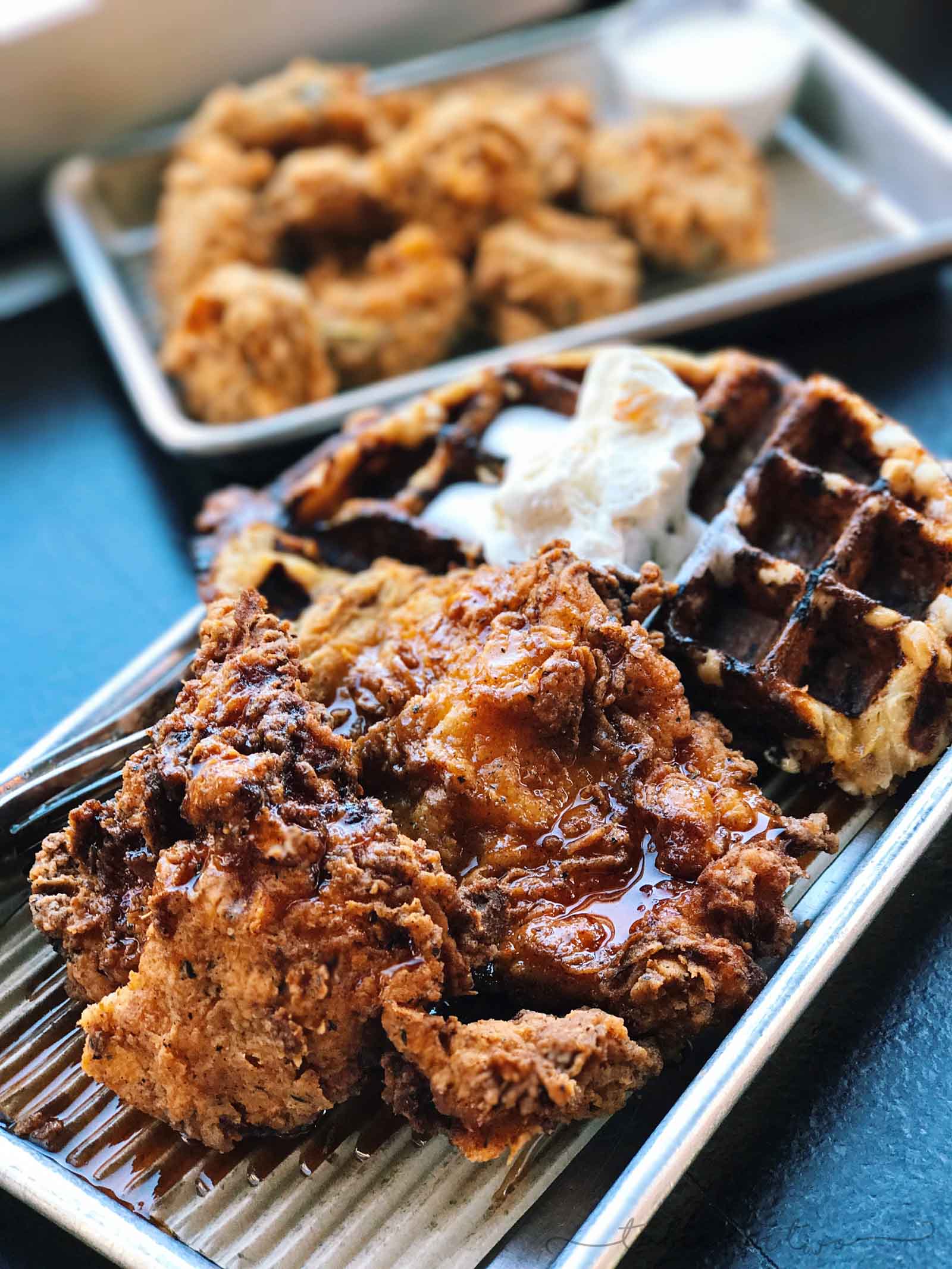 Omg their chicken and waffles and fried pickles. Best breakfast ever. Their fried pickles were unlike any I have had before. I love that they were thick slices! 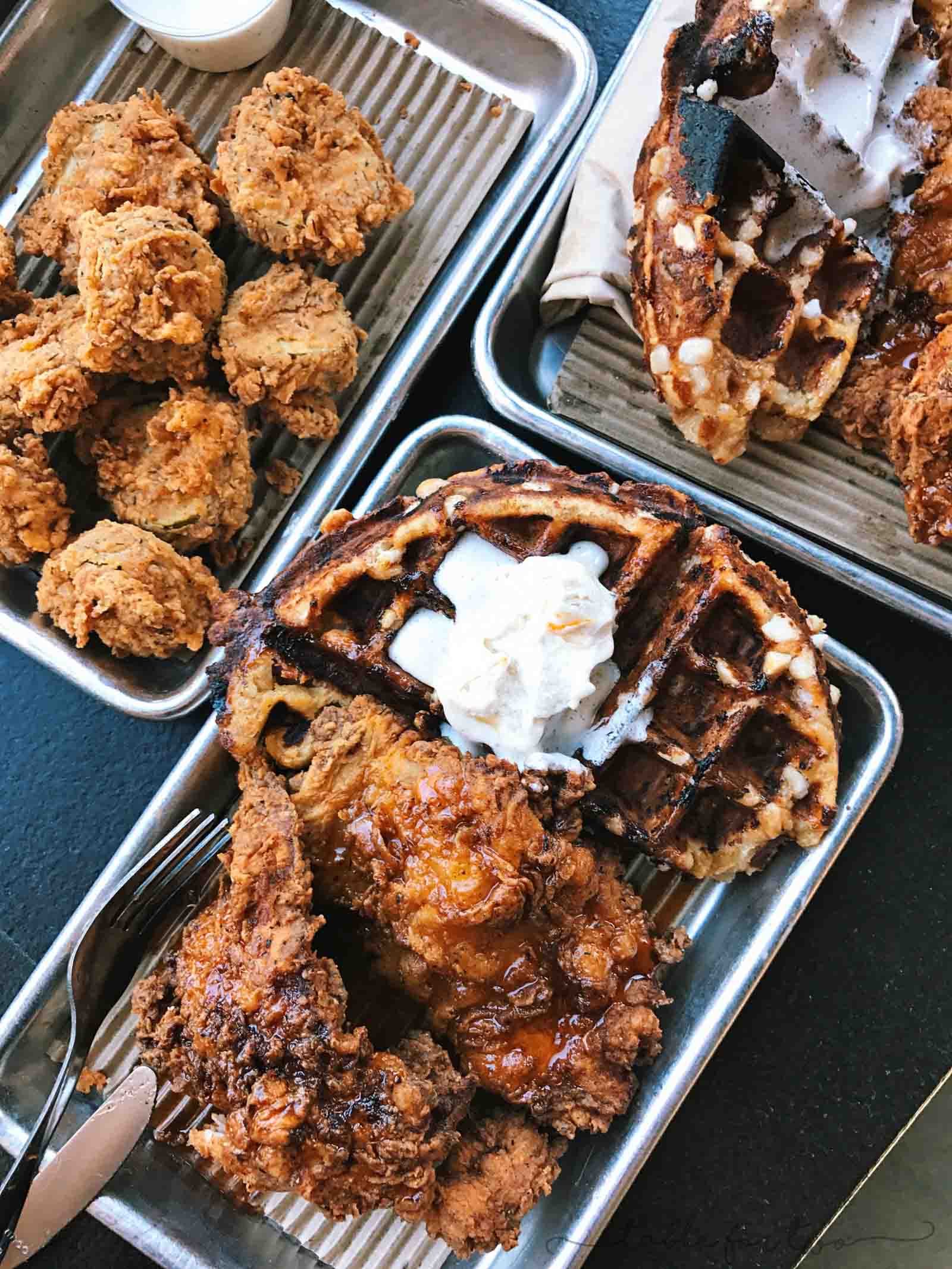 As if we didn’t have enough food for breakfast, mid-afternoon, we strolled over to The Cosmopolitan to find the secret pizza place! It’s not really a secret since you see everyone with pizza and you can smell the pizza from a hallway but I guess if you weren’t specifically looking for a pizza place, you wouldn’t know it’s there. It’s down a long hallway and the pizza was SO good. Their white pizza was my favorite! 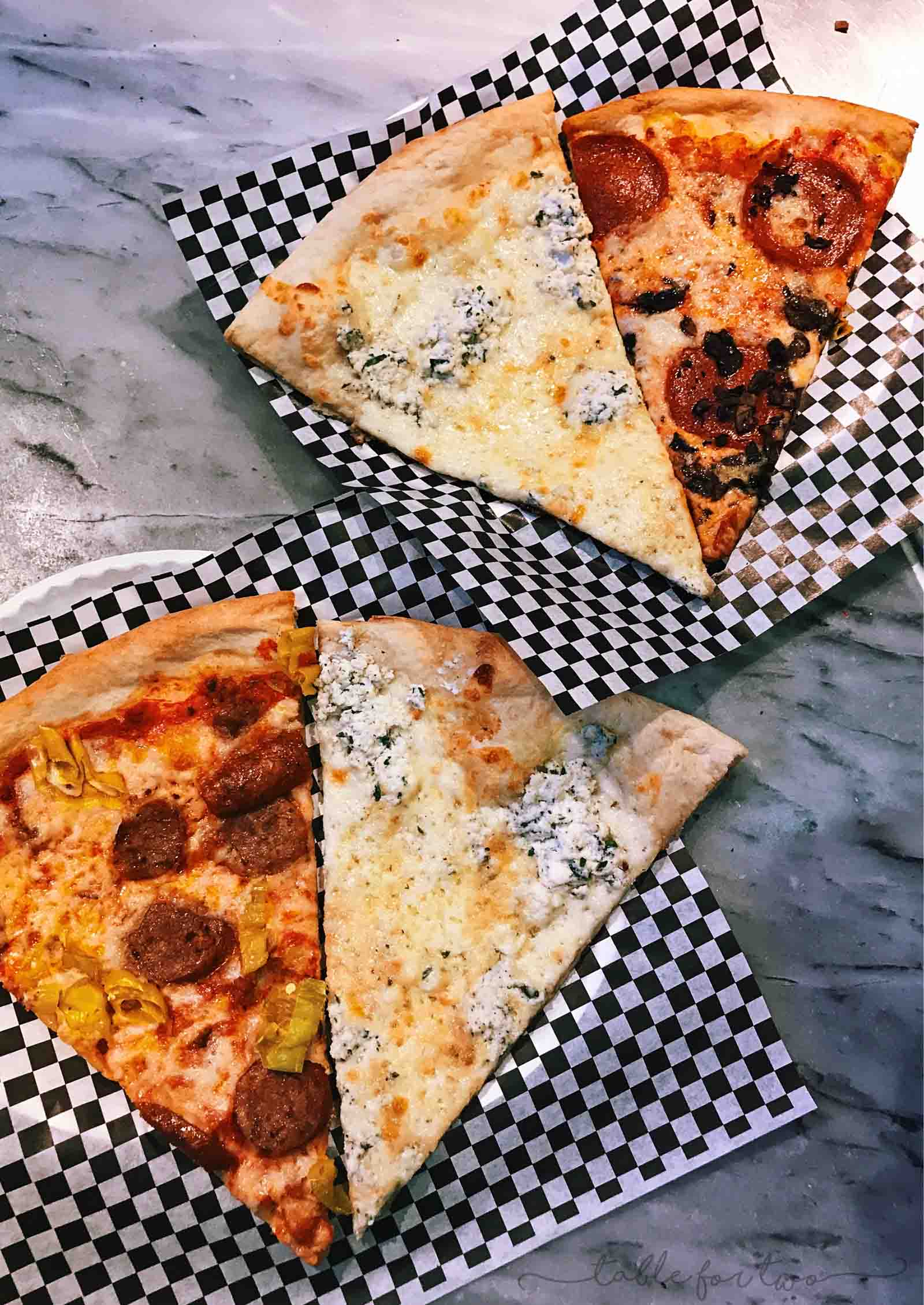 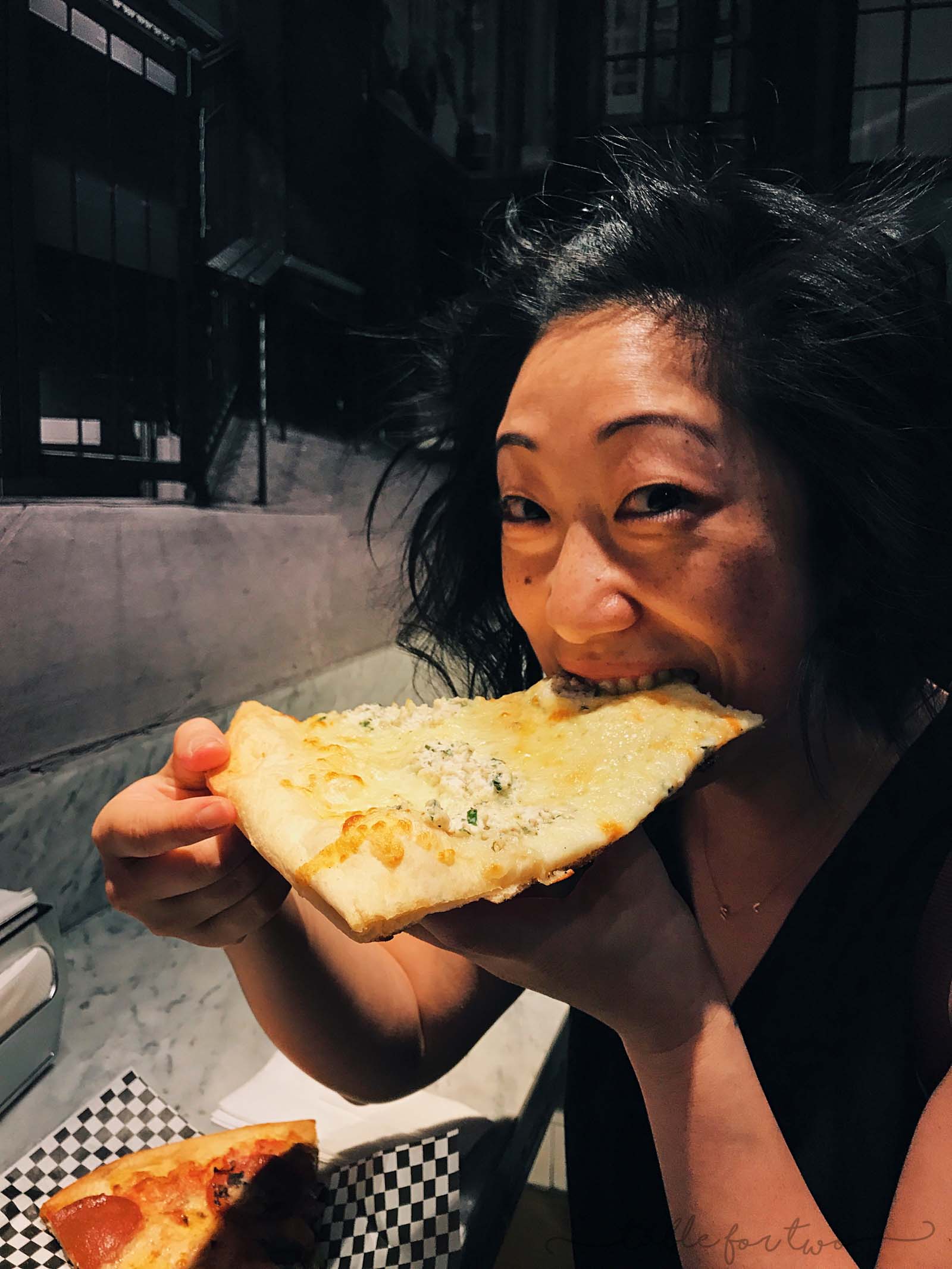 OMG HAI. MARRY ME, PLEASE. (I HAD to throw in a couple BSB concert pics. Duh!) 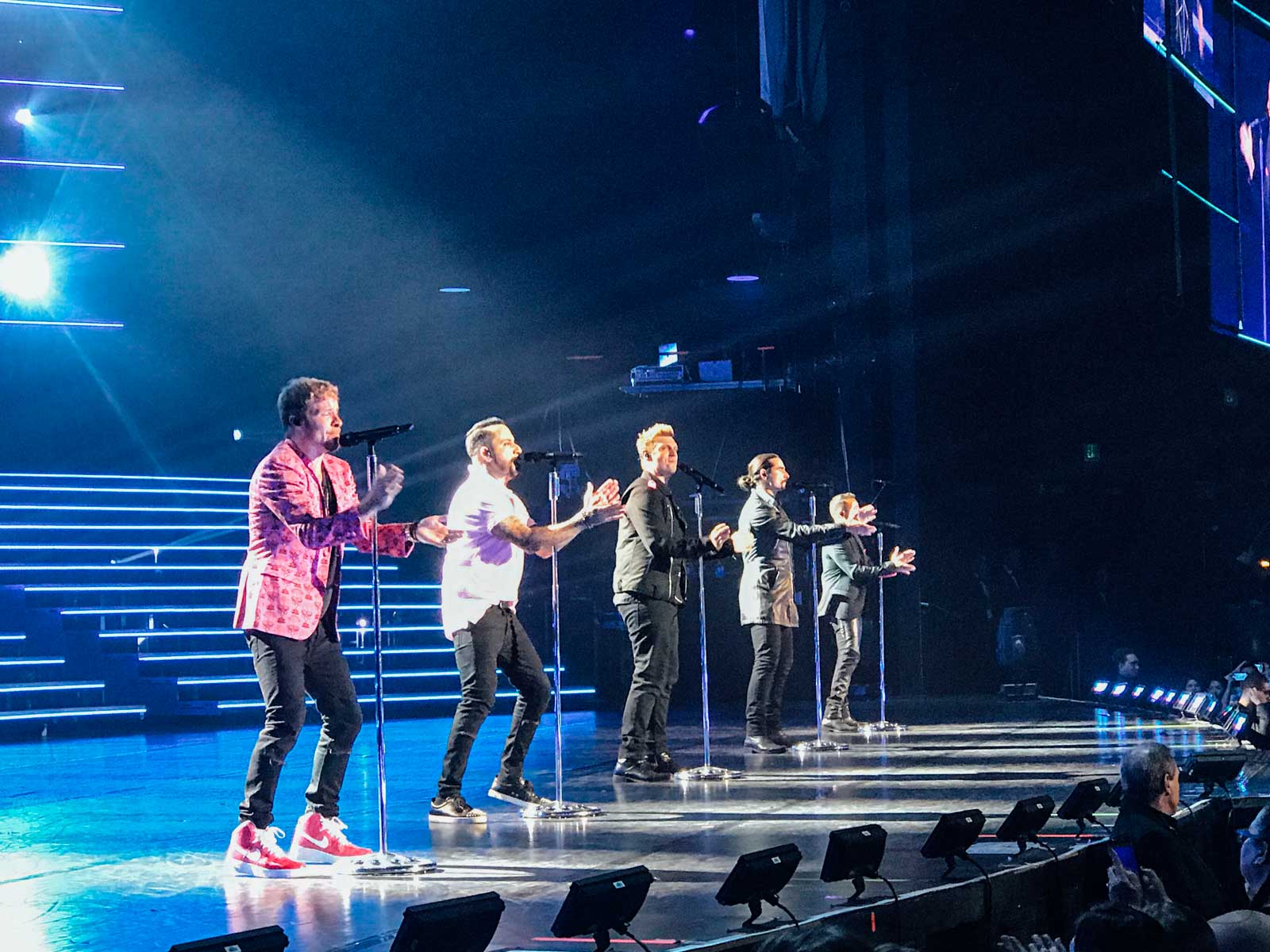 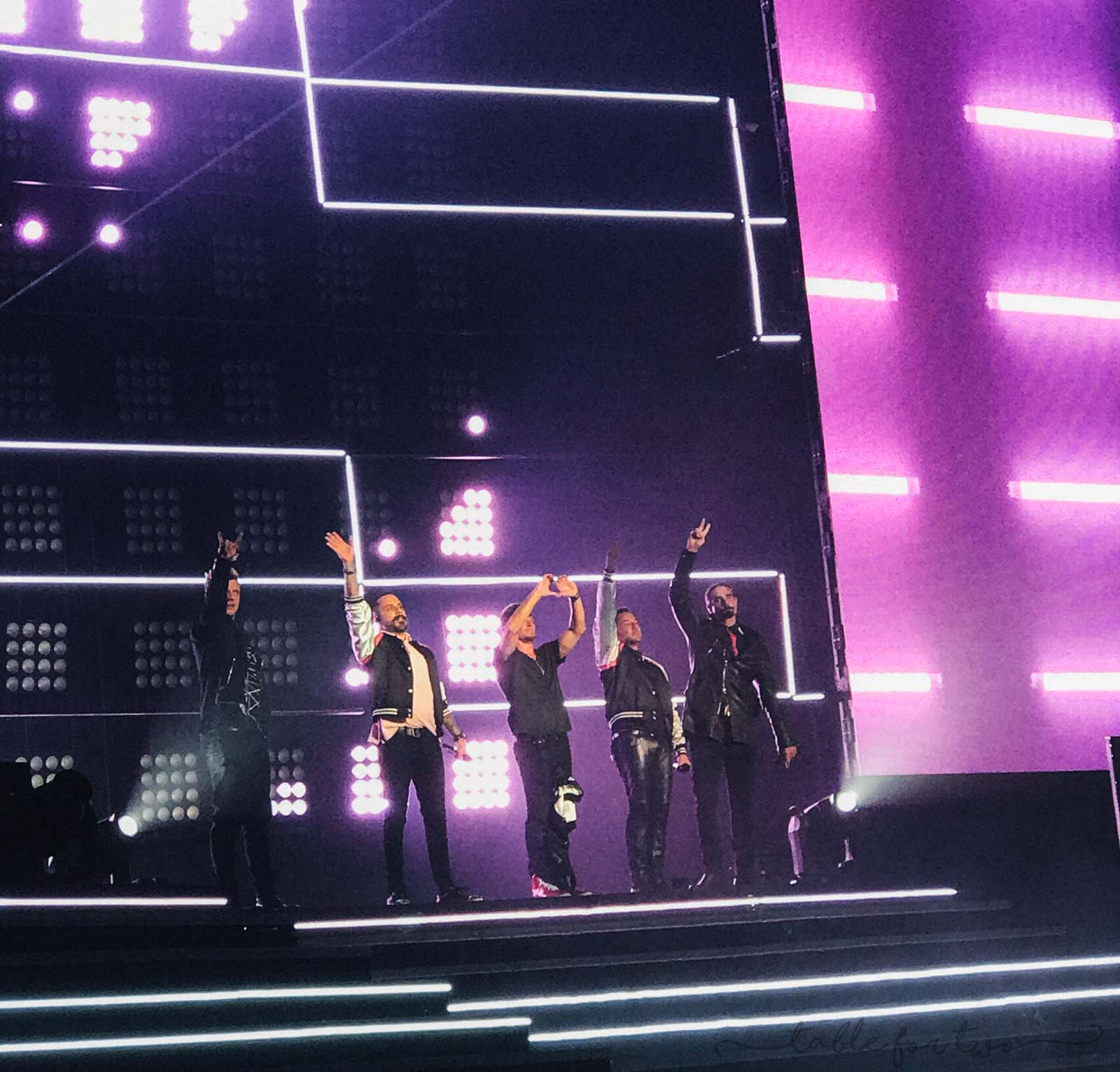 The following morning following the BSB concert, we strolled down to Herringbone for brunch. Herringbone is located inside the Aria so it was super easy to get to. We ate our feelings at their brunch buffet and reminisced about the epic BSB concert. 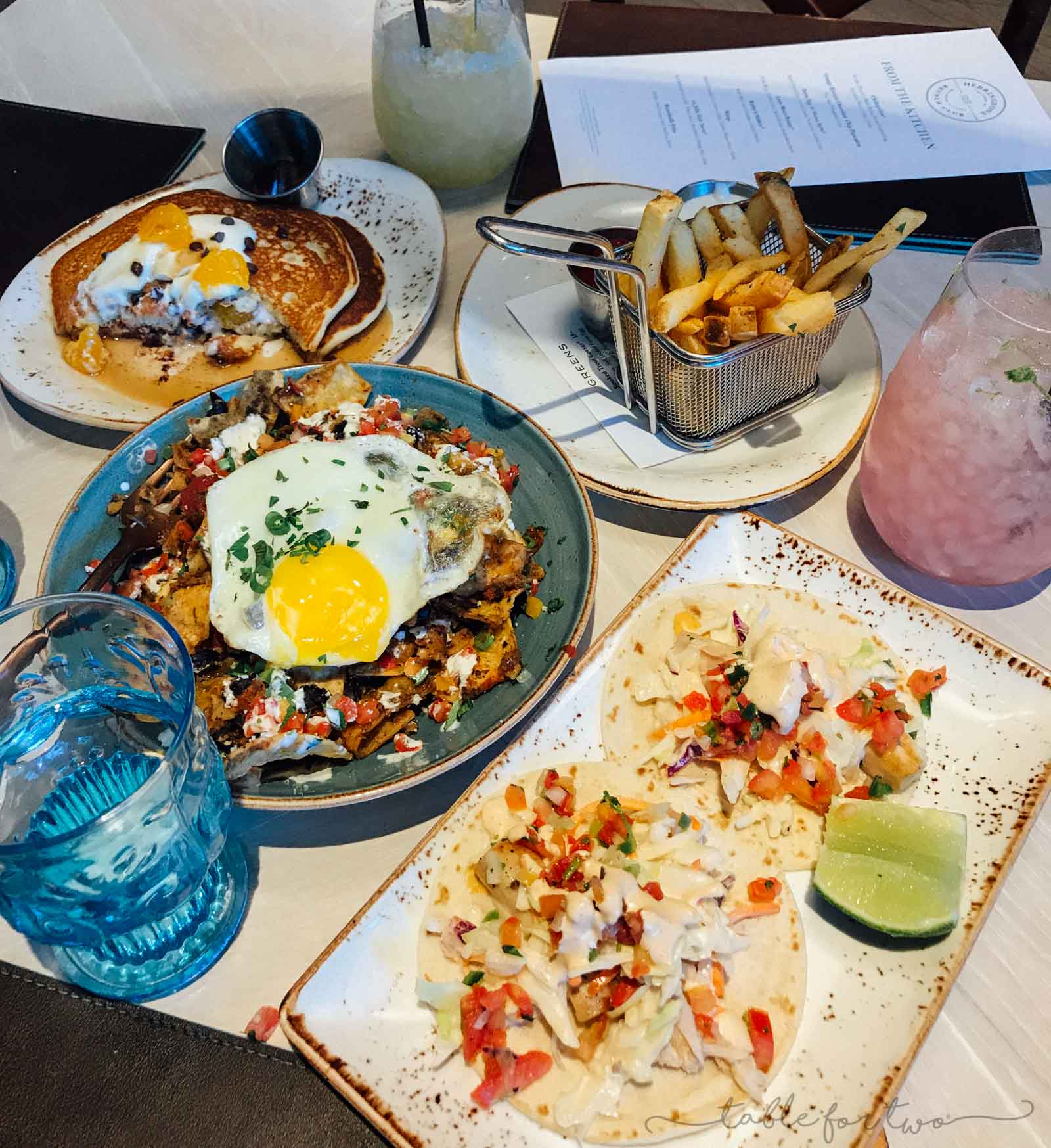 Our last dinner in Las Vegas was at Momofuku. So, we have a Momofuku in DC but we never make it into the city for restaurants. We live 20 minutes from DC and we both work in DC but the traffic is insane so we never want to stay any longer in DC and just want to head home after work and/or we don’t want to come into the city on weekends.

ANYWAY. We are definitely going to have to make a special trip into DC for Momofuku because the Momofuku in Las Vegas was AMAZING. The menu is slightly different in DC than it is in Las Vegas which is great because I get to try new things :) haha

We ordered a bunch of stuff. Spicy cucumbers, shishito peppers, karange chicken bao, cold spicy noodles (omg these were so spicy but so good. I recreated it and I’ll be posting the recipe soon). 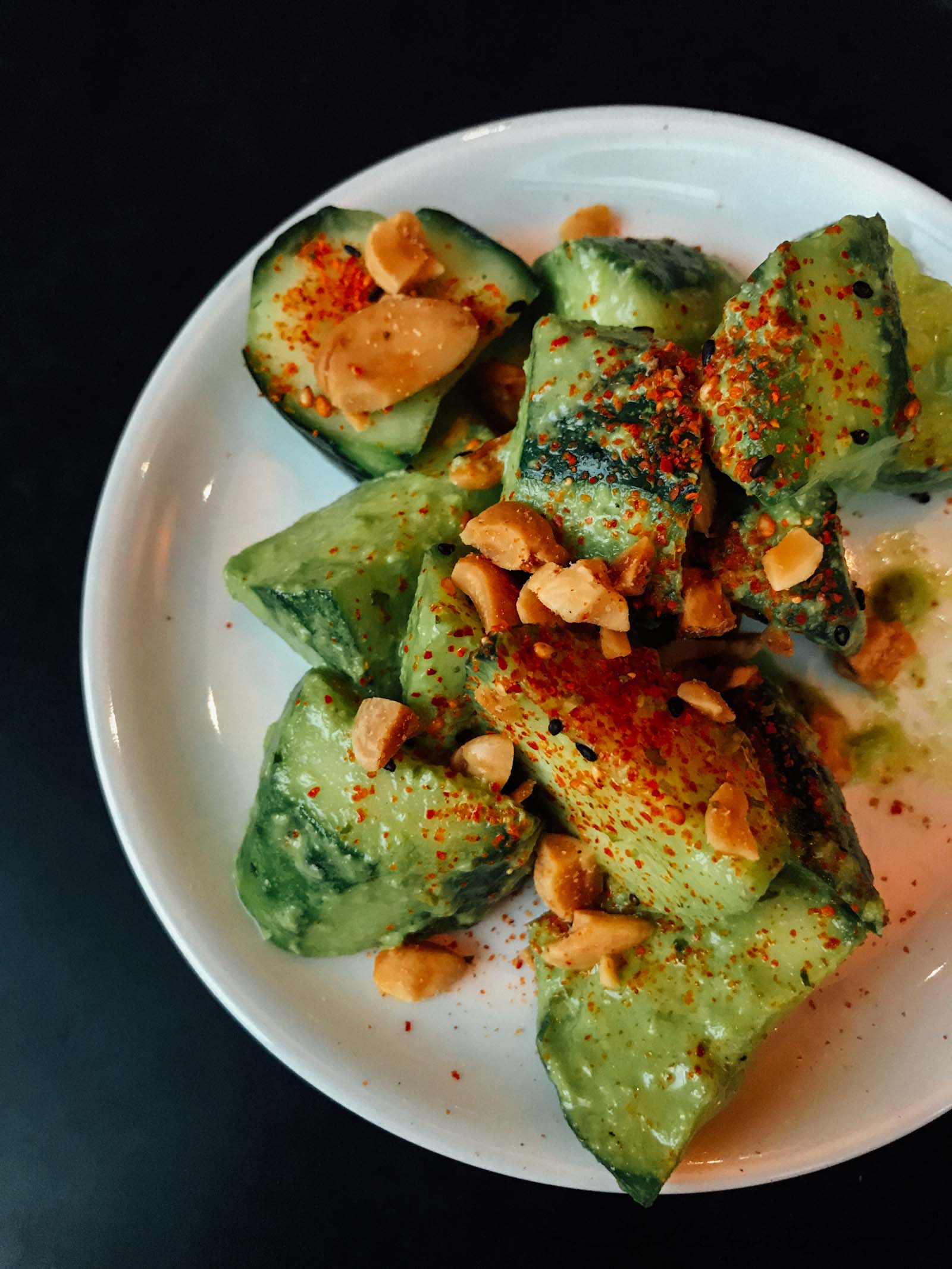 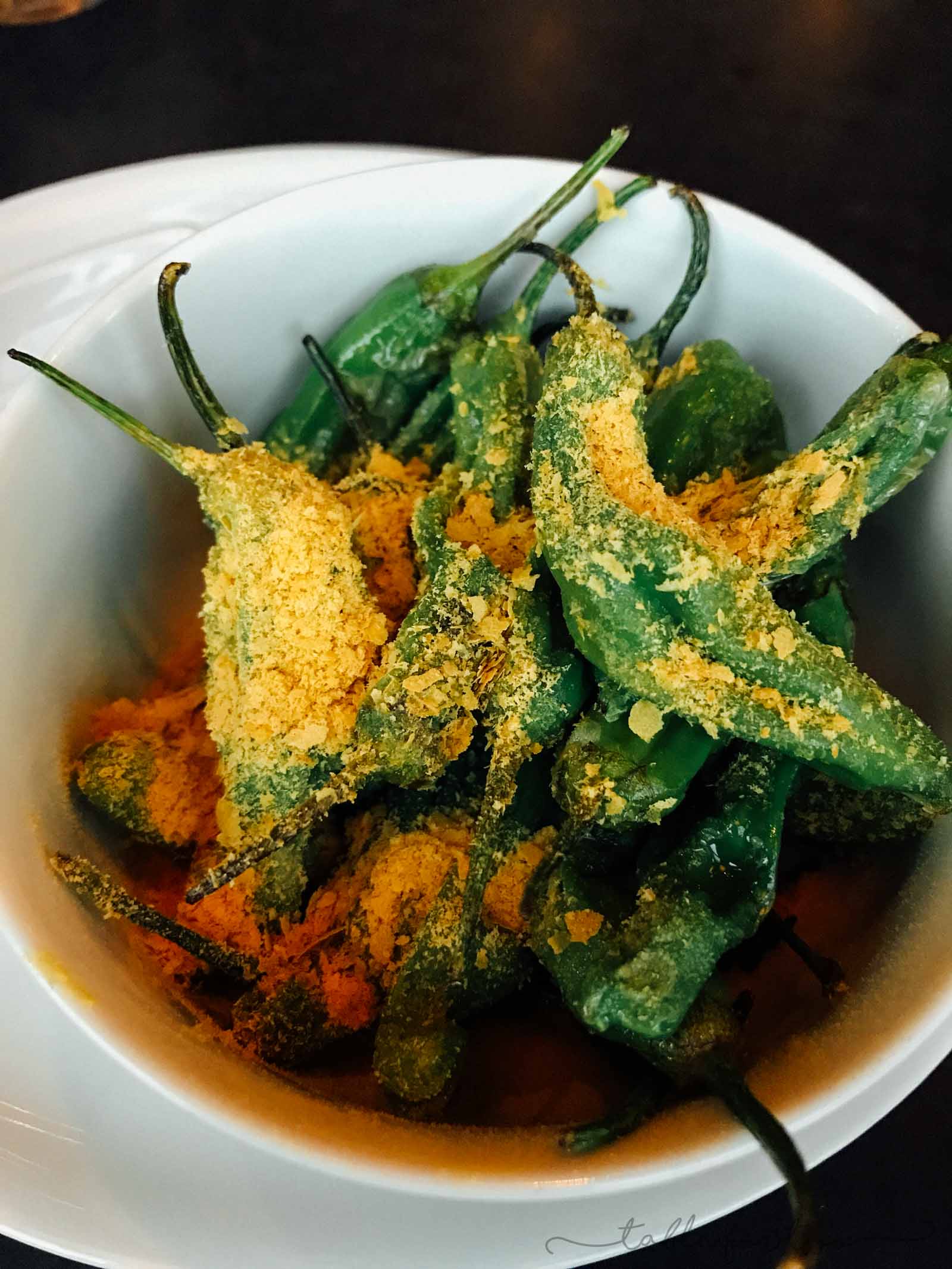 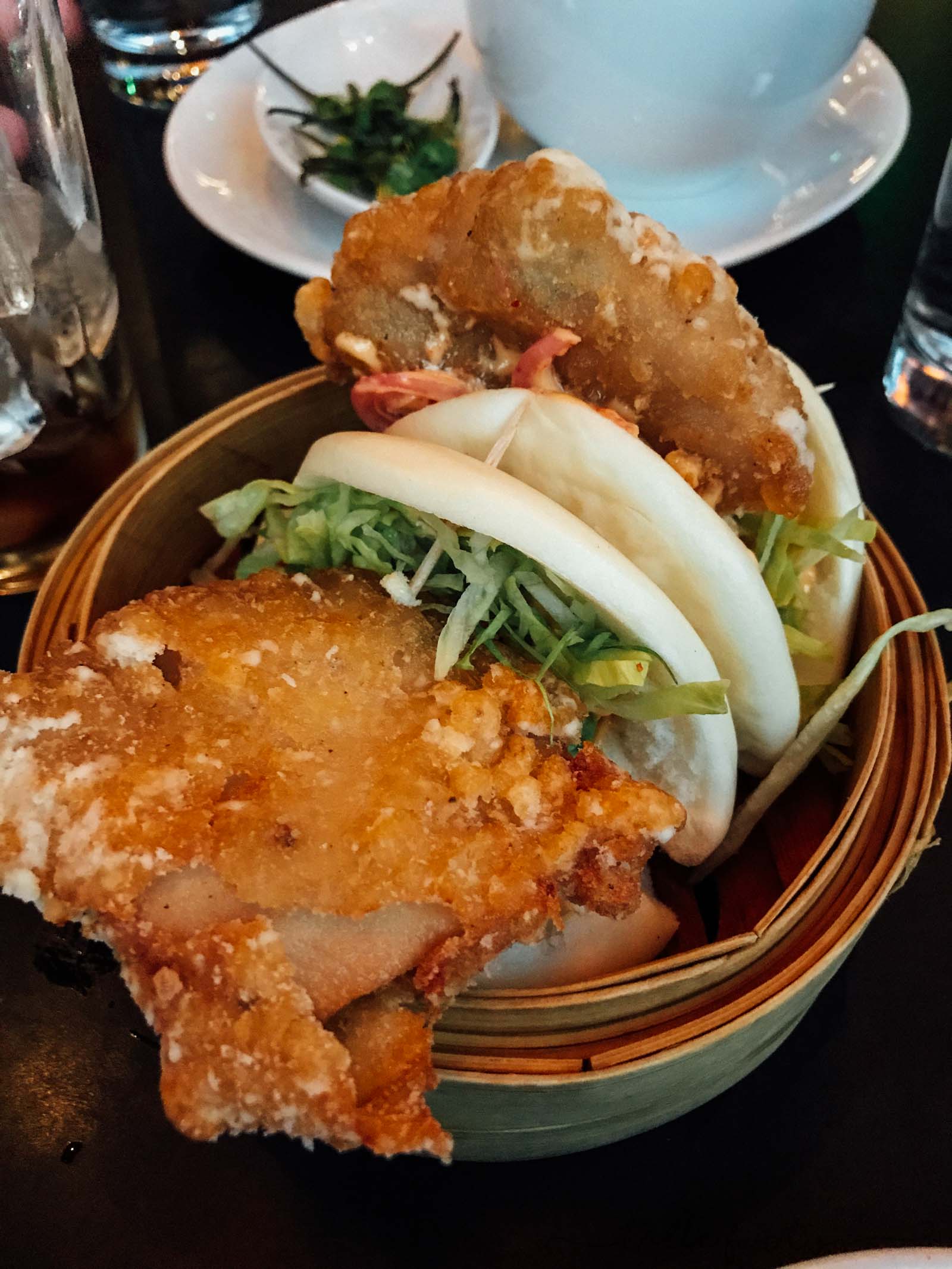 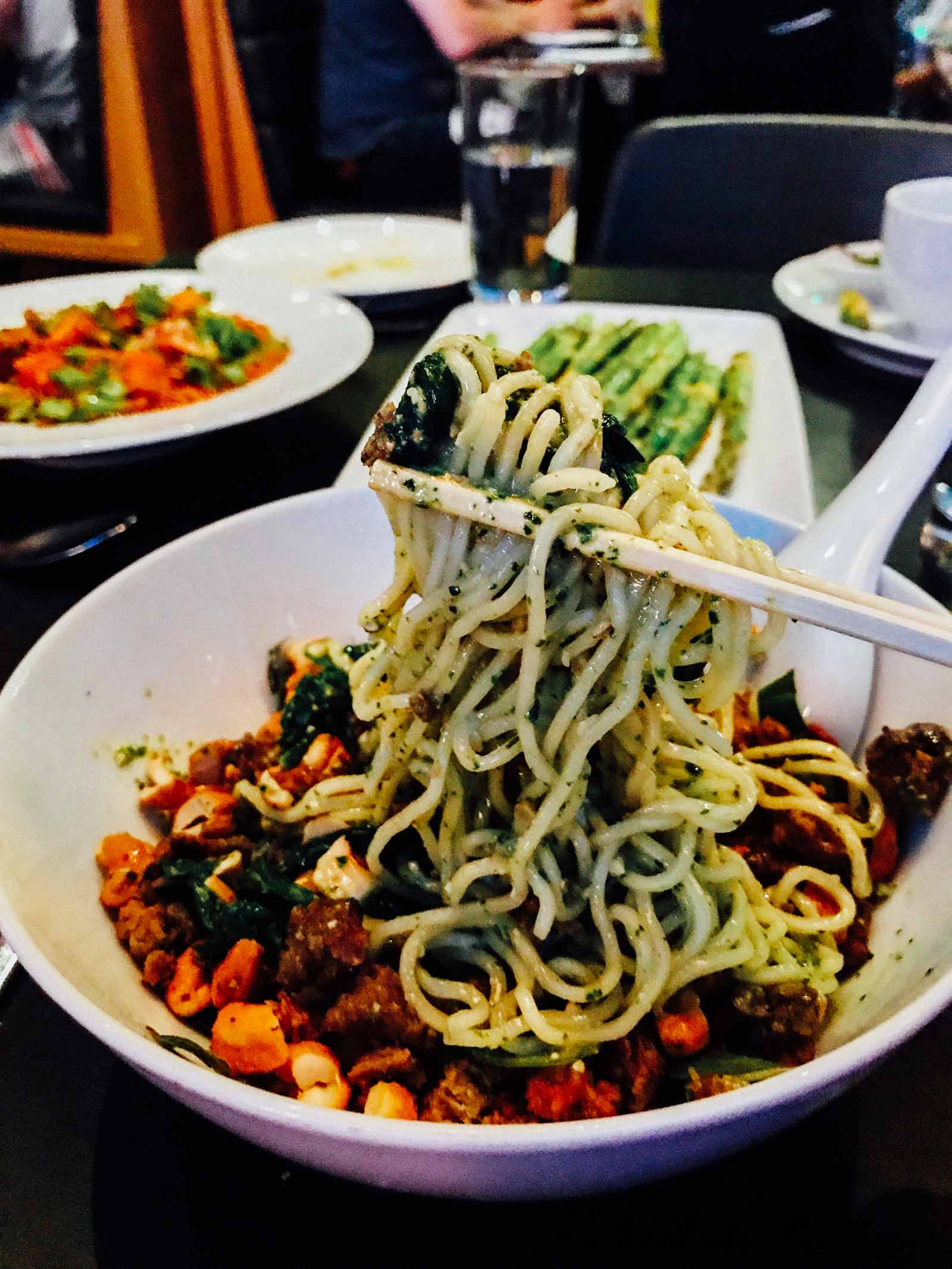 I was most definitely drooling while reading this post. Luckily I can blame it on the food and say it had absolutely nothing to do with my beloved BSB (who I still listen to every single day..)

Side note. I tried to subscribe to your blog but it wouldn't let me?

What do you mean it wouldn't let you? What error were you getting? I just tested it out and it seems to have worked on my end. I got the confirmation email and everything.

My sister and I were just there in Vegas too a month ago for our annual girls trip and to see the BSB. It was good to see them and reminisce. We also went to Eggslut and Herringbone. I agreed, everything in Vegas is albeit expensive and too hot to walk outside. We had planned to walk over to the PH to see the concert, but ended up just taking the taxi. You didn't say where you stayed at, but we were at the Vdara and loved it and ate mostly at the restaurants in the Aria.

We stayed at the Aria! That's so fun that you guys were there too! I miss BSB a lot :)