This chocolate cinnamon bread is a Starbucks copycat recipe worth making at home! A crunchy sugary topping gives way to moist chocolate bread scented with cinnamon. Just add your favorite cup of coffee!

Starbucks has this way of sucking you into their store. They have yummy drinks and they also have really good pastries. I mean, the lemon pound cake has got to be one of my favorites, and this chocolate cinnamon bread was another before they took it off the menu. (Sigh.)

Chocolate cinnamon bread was one of Starbucks’ holiday treats, and I was eager to see it back on the menu this year…until I realized all of the other holiday items were available again, but the chocolate cinnamon bread still wasn’t. Luckily, the original recipe was posted in 2013, so whether it’s your fave or you never got a chance to try it, you can make it yourself at home.

What I love most about this bread is the crunchy sugary topping and the cinnamon that is just enough to add warmth without being cloying about it. This bread reminds me of the holidays and hot chocolate and all of the other flavors we associated with this time of year.

No unexpected ingredients here! In fact, you probably have a lot of these in your pantry already.

For the crunchy sugar topping:

How to Make Chocolate Cinnamon Bread

Note that this makes two loaves, so if you want only one, press the 1/2 button on the recipe card!

Prepare. Preheat oven to 350ºF and line two 9×5 loaf pans with parchment paper. Use enough that the paper hangs from both sides for easy bread removal.

Make the topping. In a small bowl, combine the granulated sugar and spices. Don’t add the sparkle sugar yet.

Combine the butter, sugar, and eggs. In the bowl of a stand mixer fitted with the paddle attachment, cream the butter and sugar for 2 minutes, or until it’s light and fluffy in texture. Beat in the eggs one at a time.

Mix the wet ingredients. In a third bowl, whisk the buttermilk, water, and vanilla extract.

Finish the batter. Add the flour mixture and buttermilk mixture to the bowl of the stand mixer, alternating between the two and mixing at a low speed. Scrape down the sides of the bowl as needed and mix until just combined.

Assemble. Divide the batter into two prepared loaf pans, followed by the topping mixture. Sprinkle the sparkle sugar on top.

Bake. Place the pans in the oven and bake for 45 to 50 minutes, or until a toothpick inserted into the center of the bread comes out clean.

Cool. Let the bread cool in the pans for 15 minutes, then pull up on the parchment paper to remove the loaves from the pans. Let them finish cooling on a wire rack before cutting.

Here are some tips to help you make perfect chocolate cinnamon bread!

You can store this bread in an airtight container (or tightly wrapped) for up to 5 days.

Can This Be Frozen?

Yes, this bread freezes well! Wrap it tightly in a layer of plastic wrap, followed by a layer of foil, then freeze it for up to 3 months. Let it thaw at room temperature before serving. 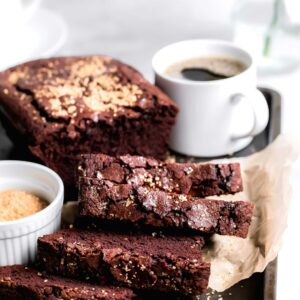 Okay the flavor on this bread is amazing.

My only thing is that it's falling apart! I have no idea why!

The top is falling off the loaf. And like I find it isn't staying together. I will make it again but any ideas how to keep it im its loaf shape!

sorry the top of the loaf is falling apart! i'm not quite sure why; when I make it the top kind of separates from the loaf too and that's how i've had it from Starbucks. I'm wondering if it's just the nature of the sugary crust. i'm sorry i don't have much of an answer for this!

This turned out AMAZING! I made one for my family and gave one to the neighbors. Here’s what the neighbors said “Starbucks does not even compare!! OMG. This is delicious!” Thank you Julie.

Oh my goodness! This is simply delicious! I've never ordered it at Starbucks to compare. It just came out of the oven snd I couldn't wait for it to cool so I took a (HOT) slice out. It's moist, chocolatey but not overly, with a hint of cinnamon! My family just joined in and we're literally eating it outta the pan as I write this review. No need for the topping in my opinion.

I didn't know Starbucks sold something like this. I guess I've just never noticed it. I can't compare this recipe to what you would get in the store, but this one is pretty good. I love chocolate and cinnamon together. There is definitely a strong cinnamon flavor here. I might even throw some chocolate chips or chocolate chunks into the bread the next time I make it.

why Dutch preceded and not regular cocoa? I grew up on natural cocoa, and it’s all I ever have in my pantry. How will it effect the recipe to use natural?

Dutch-processed is darker vs. regular cocoa powder. You can use whatever you have on hand!