Home » Travel » Where to Eat in Chicago

At the end of June, Gina, Brandy, Rachel, and I planned a girls weekend mini getaway to the windy city, Chicago! All the places we ate at were a drop in the bucket with what Chicago has to offer. I’m definitely going to plan a trip back to eat at more places! Here’s my post on where to eat in Chicago!!!

Gina, Brandy, and I flew in a day early because we got tickets to go to Alinea! Claire joined us there, as well. We were all so excited. So many people told us that this was the meal of a lifetime and it was mind-blowing and just changed the way they thought about food. It was really hyped up but we were ready for that because Alinea was voted #9 restaurant in the world in 2014 and unfortunately dropped to #26 in 2015. We were prepared to have our minds and taste buds blown! 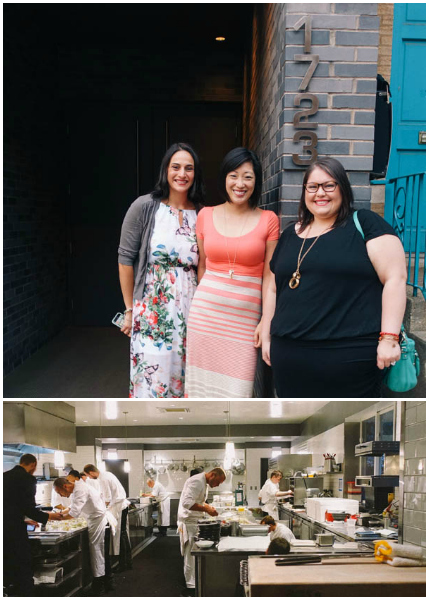 And I wish I could report back and say that they were but it was unfortunately a letdown :( we were expecting way more for paying $300 each. The flavors were incredible and I definitely loved the play on food and appreciated how he could make such a beautiful creation out of ingredients but I don’t know, something about the overall experience was lacking. We were definitely expecting more meat than what we got. I think the only meat dish we got was a pork belly piece and everything else was vegetarian or small bites. There were 12 courses (which to me is shocking because I’ve paid $$$ for meals before that were at least 18 courses) and three of which were dessert. It was definitely an experience but I’m sad to say I’ve had better! Roses’s Luxury and Komi in DC were actually better than Alinea. Crazy! I hate to discourage anyone from going so I’ll leave it at: if you’re looking to splurge and want to see what a world-renowned restaurant is like and it’s your first experience at one, then definitely book something! I think Jason and I have more restaurants under our belt we can compare this to so that this particular experience wasn’t as mind-blowing.

All the meats, cheeses, and wine you could dream of! We got here around 3 in the afternoon (prior to Alinea) because we had all just hopped off a plane and were STARVING. We knew we couldn’t eat too much prior to Alinea (which I guess in hindsight, we should’ve eaten more, haha) but we wanted to stop by anyway to have a small bite and it was PACKED! I can’t imagine what this place is like around dinnertime. The crispy pig ears and kale were a huge favorite of ours, along with the beet and goat cheese salad! 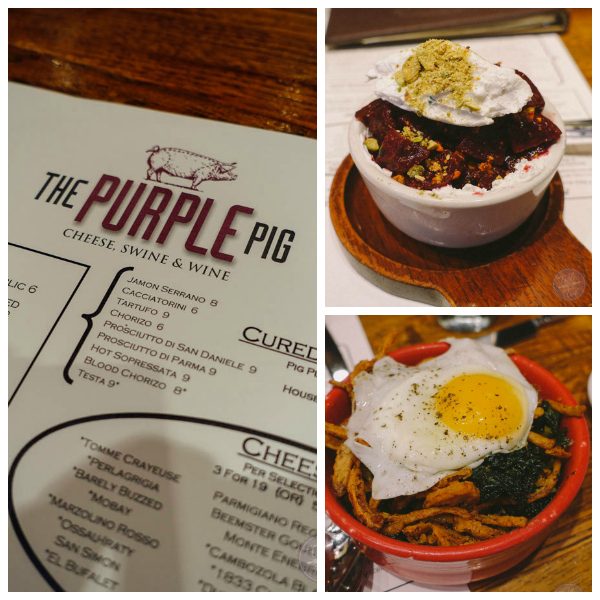 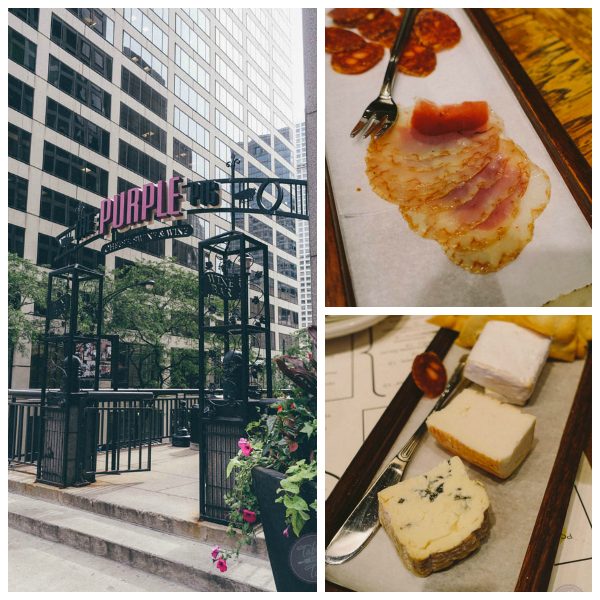 We were so lucky that our hotel was a short walk from Eataly. I think we must’ve walked past it every day! It’s AMAZING in there. So much to see and sample. I wanted to buy one of everything in the store. I’m pretty sure TSA would not have been pleased. I wish DC had an Eataly. I swear we’d be a great market for it. We went up to the 2nd floor and had lunch. Fresh pasta and pizza. Oh, and of course day-drinking with a glass or two of rosé! 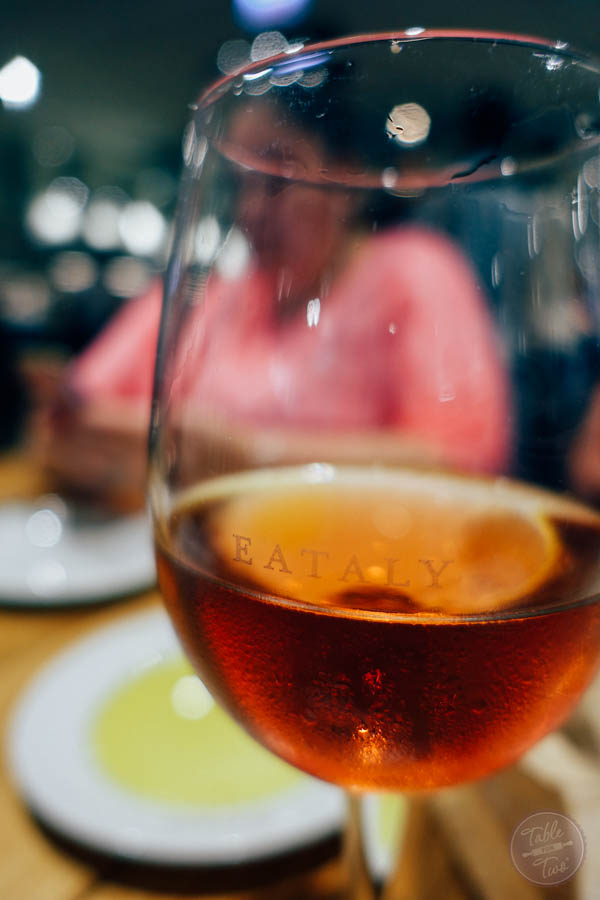 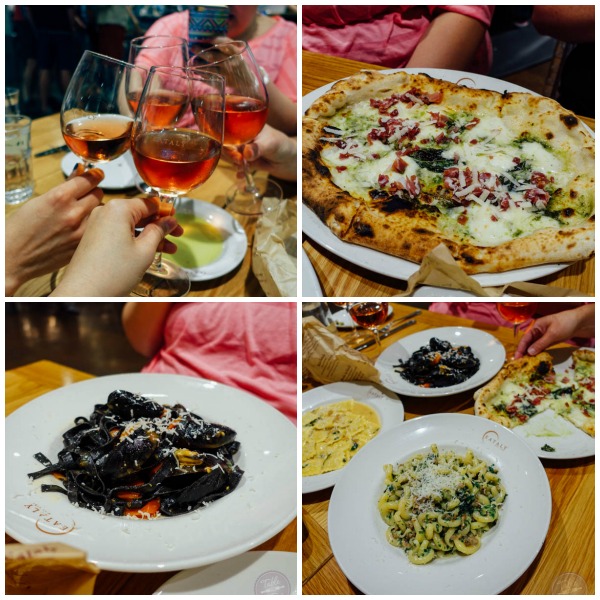 Then we found CHEESE and we all got gelato. The coconut gelato was unbelievable. It was as if I had just hacked open a fresh coconut!! You have to get gelato when you’re there. They also had a Nutella bar (swoon) but we were so full from lunch that we didn’t get anything from there. Next time! 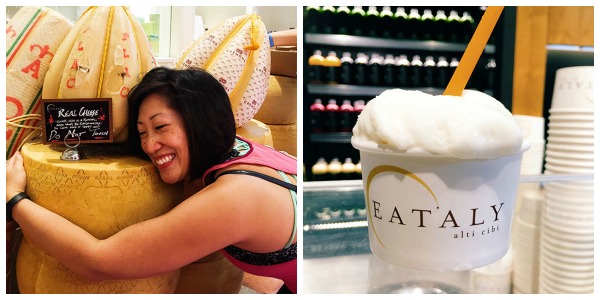 One of Rick Bayless’ restaurants in Chicago. If you love Mexican food, you’ll love this place. I don’t think we had a bad dish here. We got their delicious margaritas and a bunch of small plates. And of course we had to get the duck carnitas. It said it was for two but you can easily have four people be full off it. 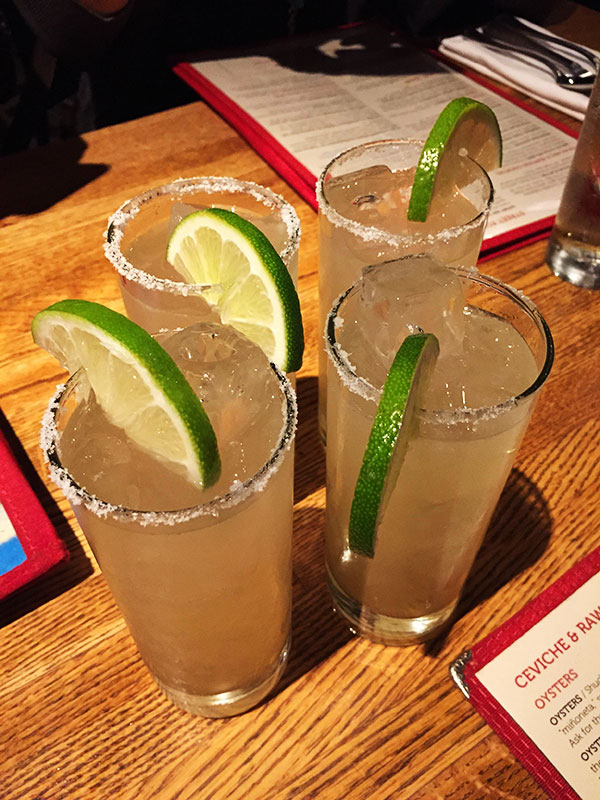 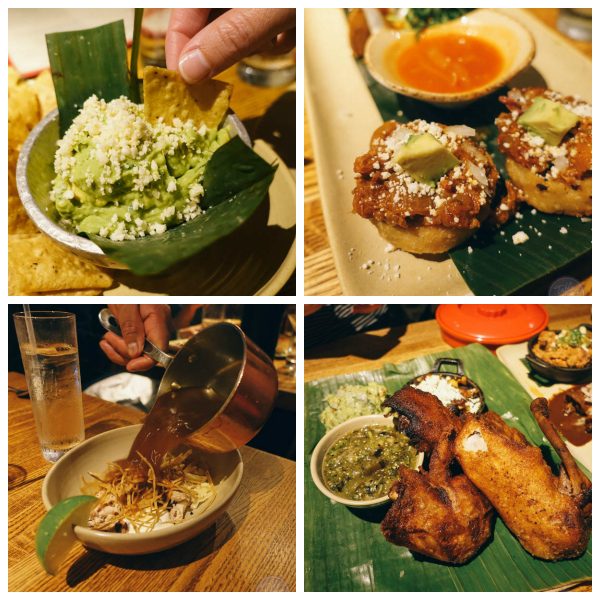 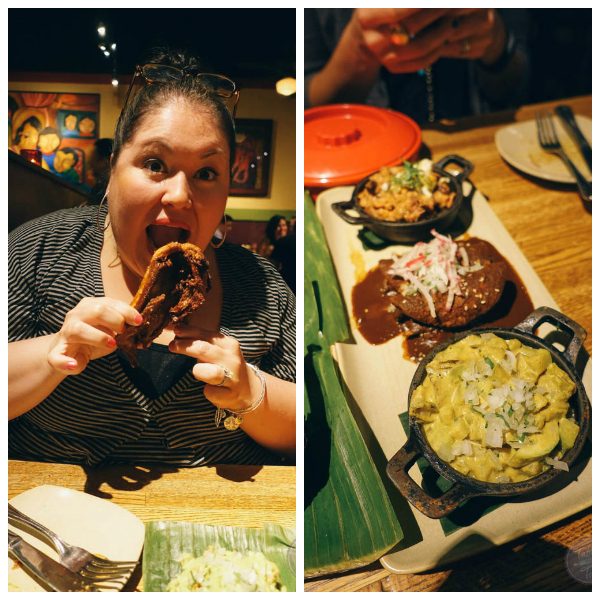 So when we planned this trip, we didn’t realize Eat, Write, Retreat would be the same weekend! Yay for meeting up with blogger friends! We (Meagan, Brandy, Laura, Gina, Rachel, Erin, and Jocelyn) all met up at The Kitchen for brunch. It was mighty tasty and we had so much fun gabbing. The best part? Snapchatting it all! I swear I got them all hooked ;) 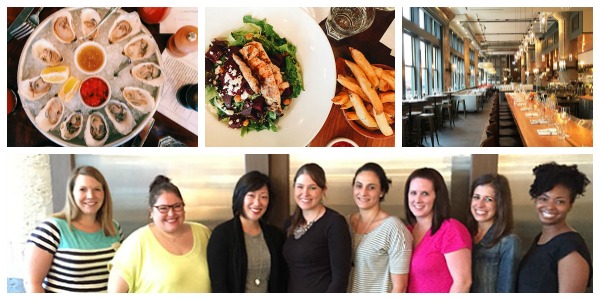 Girl and the Goat

Hands down the best meal I had in Chicago. This made up for Alinea 100%. Every dish we had here was amazing and who knew that the green beans was one of my favorite dishes?! I mean, green beans. You could’ve told me that at the beginning of the meal and I would’ve laughed at you. Brandy actually recreated it and I am 100% putting that on my dinner menu sometime soon. It was phenomenal. Laura joined us for this dinner and she’s been there before but since their menu is seasonal, she had dishes she said that weren’t on the menu the first time she went! 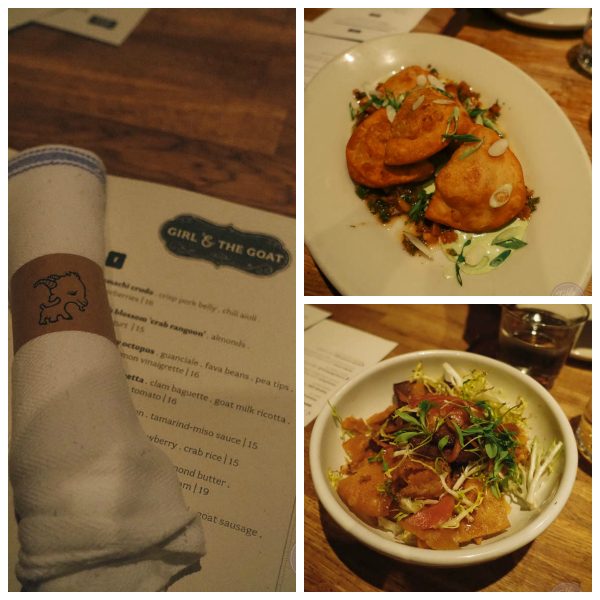 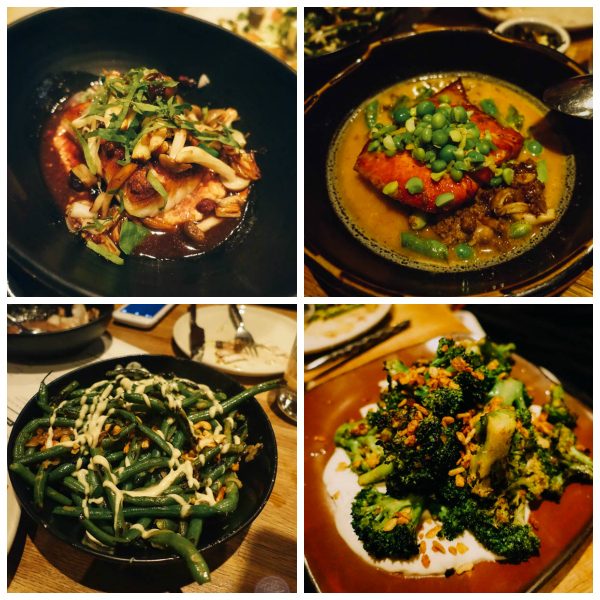 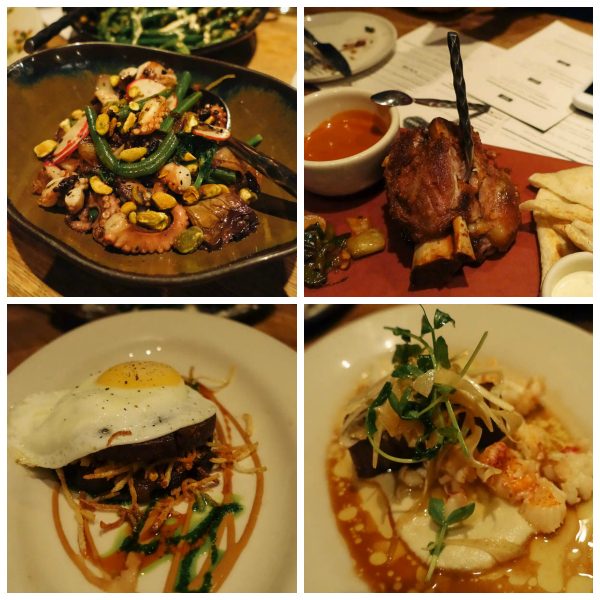 Haha, on top of all we ordered, we got dessert. Couldn’t pass it up!!

Okay, so don’t go to those stupid tourist trap places. You gotta get out of the city (Uber – it’ll be your bff all weekend) and go to Pequod’s, which is a local deep dish pizza joint that locals love and say it’s the ‘jackpot’ of deep dish pizza places. It’s about 20-25 minutes outside of the city but SO FREAKING WORTH IT. I mean, just look at the photo below. How can you tell me you won’t make that trek?? 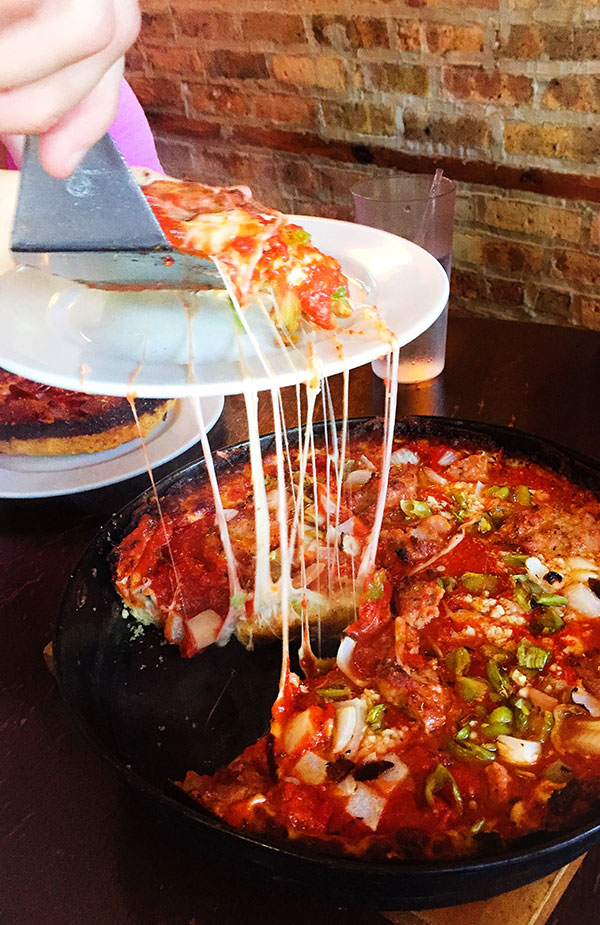 This is Top Chef contestant, Fabio’s restaurant and it was delightful. We started off with one of their most popular shared apps..the fried dough. It had a more technical and real name than what I’m giving it, haha…oh and then the burrata. So good. They have a mozzarella bar where you can order it all or pick and choose. Since we were still pretty full from deep dish pizza, we just got the burrata; which was still an excellent choice! 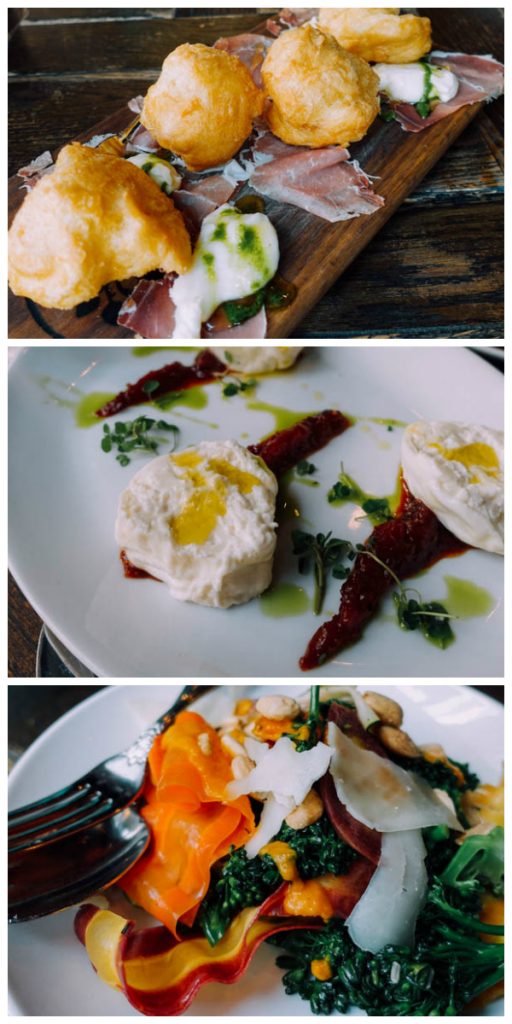 Apparently we were all feeling the carb love. We each ordered a pasta dish (with Brandy and Gina sharing one) and I’d have to say, I think mine was the best. Prosciutto sausage? Yes, please! 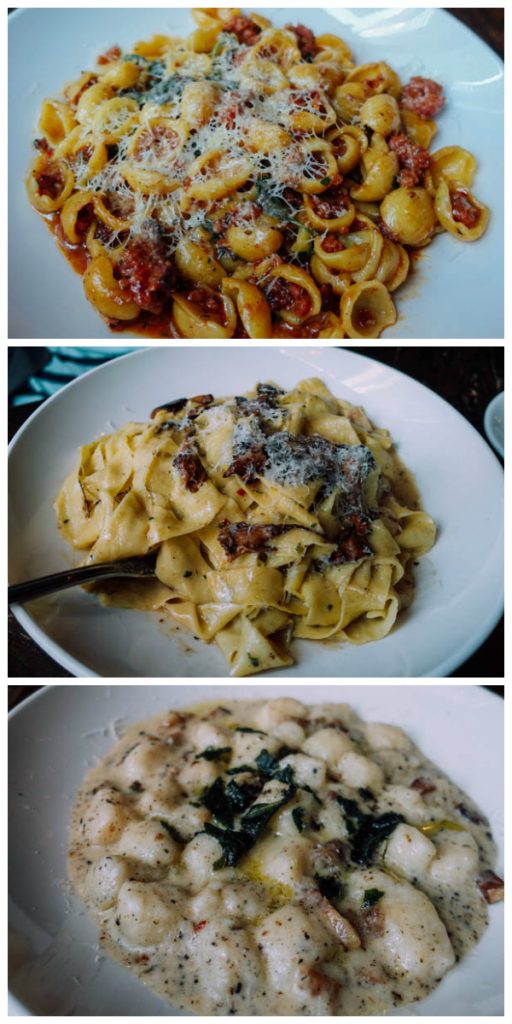 Haha ok so apparently pizza didn’t keep us that full cause we then ordered an ice cream flight, cappuccinos (because we were going to be up late for the architecture tour), and these amazing donuts that you filled yourself with jelly, caramel, or chocolate. Good god, it was amazing. 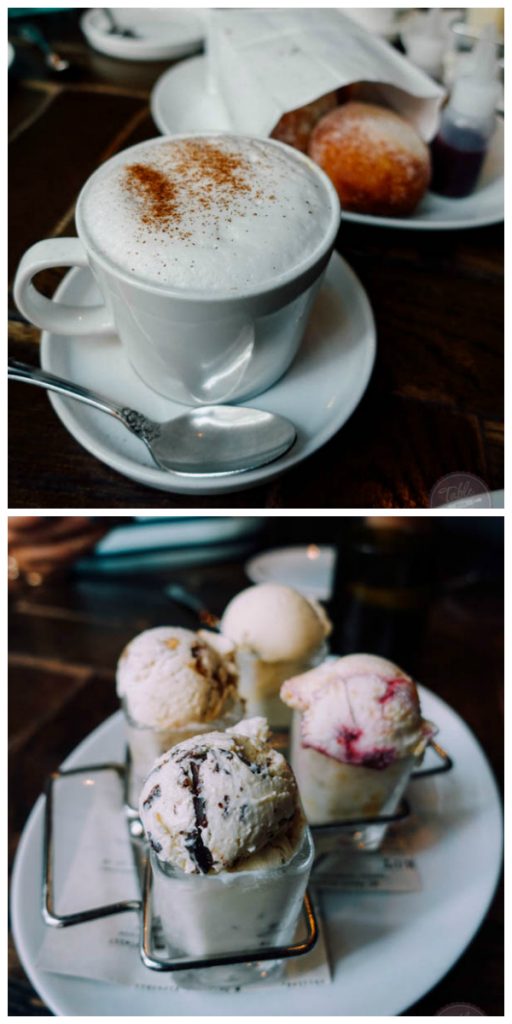 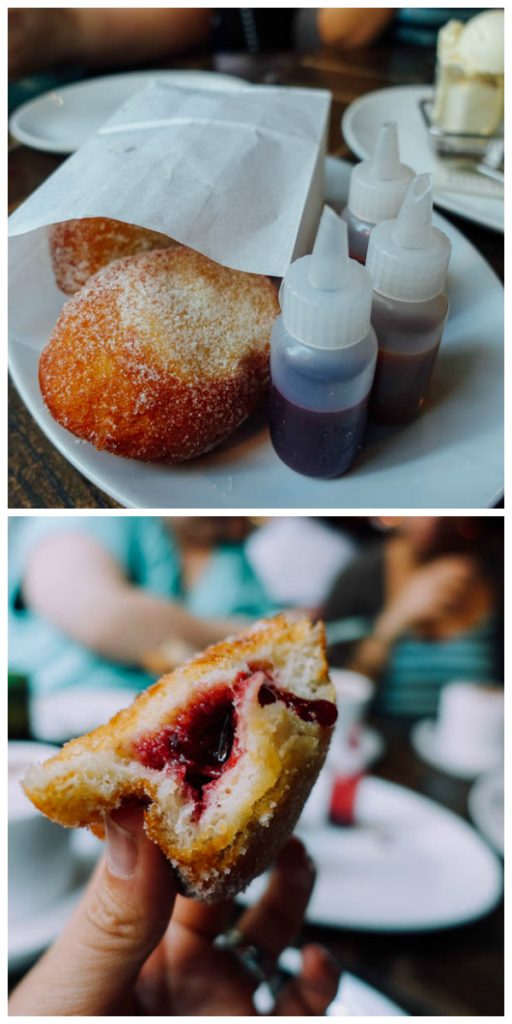 And that’s what we ate in our 4 days in Chicago! I’ll be back with part 2..which is the opposite of eating. Getting around town and working off every meal :) yup, staying active while on vacation is a must! While I would love to cozy up in bed all day, I would just feel crappy. Anyway – stay tuned!

AFTER "SHE WHO MUST BE OBEYED" (THE WIFE) AND I GOBBLED DOWN OUR SMALL GOBBLER AND THE SIDES WE PREPARED TO ACCOMPANY IT , I HAD TIME TO NAVIGATE AROUND YOUR WEBSITE - IT IS FANTASTIC.

YES, MY FAMILY NAME REALLY IS "BATMAN". NOW YOU CAN SAY "BATMAN" LOVES YOUR WEBSITE, BLOG.

HOPE YOU AND YOUR FAMILY ENJOYED A WONDERFUL THANKSGIVING.

Great places!! Next time you're in Chicago and want Pequod's you can go their Chicago location: 2207 N. Clybourn Ave. save you a trip to the burbs. :)

You forgot to mention Giordano's. It's in the heart of Chicago, but within the Neighborhoods of Downtown. It's a deep dish pizza cooked in a stone oven. It takes about 30 minutes to cook, but we'll worth the wait!

Fyi, there is also a pequod's in the city, too.

Gah, I didn't know that!! Haha we traveled far for this one, didn't we?

omg omg omg, i cant wait..thank you once again!!!