This is a sponsored post on behalf of Vermont Tourism and Cabot Creamery Cooperative. All opinions are my own. 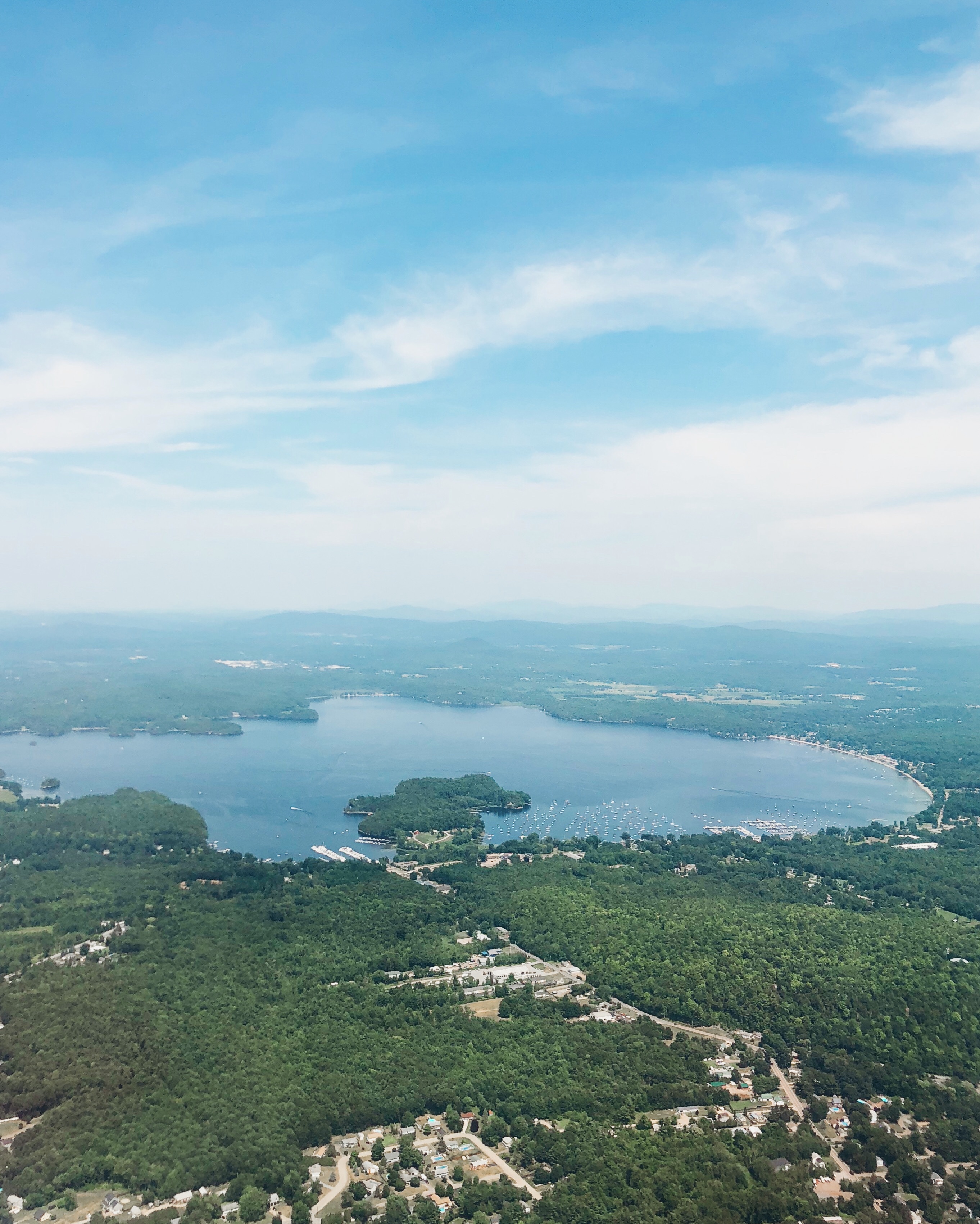 Jason and I were invited to visit the beautiful state of Vermont by Vermont Tourism and Cabot Creamery Cooperative last month.

We both had never been to Vermont before but have had always heard nothing but amazing things about it. It had been a state that we had wanted to check off our bucket list and we finally had the chance!

We flew into Burlington, which is Vermont’s largest city with a population of 42,00, you could see why they call Vermont the Green Mountain State. There is so much green everywhere (it’s 76% forested) and it’s honestly refreshing coming from a suburb-city girl, as myself, where you can’t see much green unless you drive an hour west.

As I was looking out the window on the plane, I was in awe at Vermont’s beauty already and we weren’t even on the ground yet! It was just like a postcard and I was getting excited to explore Vermont.

When we landed, we grabbed our bags and headed straight to the rental car counter. 20 minutes later, we were on our way to our rental car and out of the airport!

Our final destination was Woodstock, Vermont, about 1.5 hours southeast of Burlington.

It was a beautiful and interesting drive on Vermont interstates because one thing I noticed was that they had no billboards. They actually banned them in 1968 and I wish all states would do that. It gives it a much cleaner look!

All along the drive we noticed the rolling hills and green mountains. It was a beautiful sunny, blue skied day and there wasn’t any humidity and it was honestly our ideal weather. 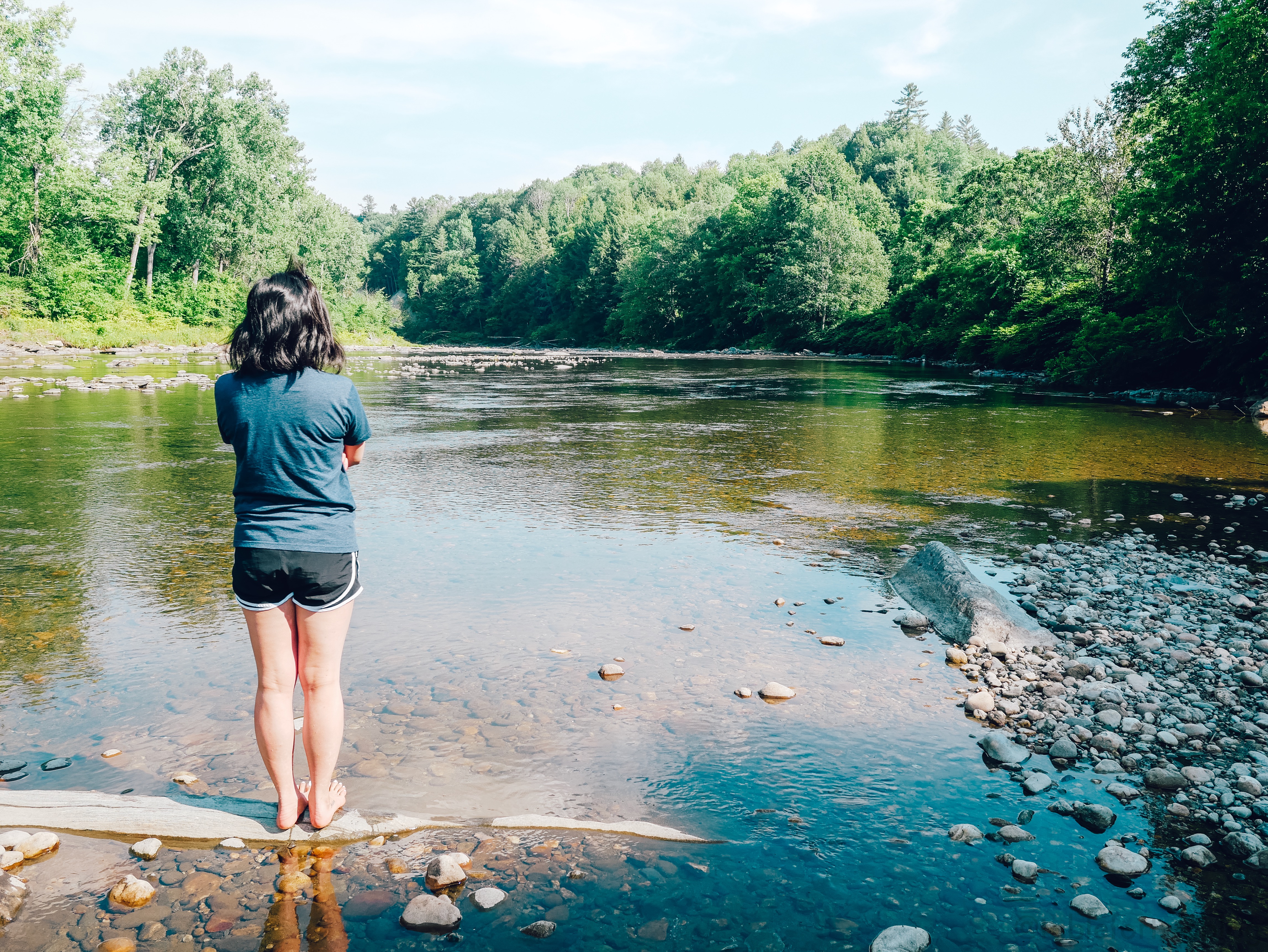 When we were close to Woodstock, we saw this river (which ended up being the White River from our Googling efforts later on) and a pull off area where a couple cars were parked. We decided, why the heck not? So we pulled over and walked down to the river.

It was beautiful!!! I’m so glad we stopped. I was able to dip my toes in the clear, cold water. We later learned that Vermont has 808 lakes and ponds and more than 7,000 miles of rivers and streams!

Where to stay in Woodstock, Vermont 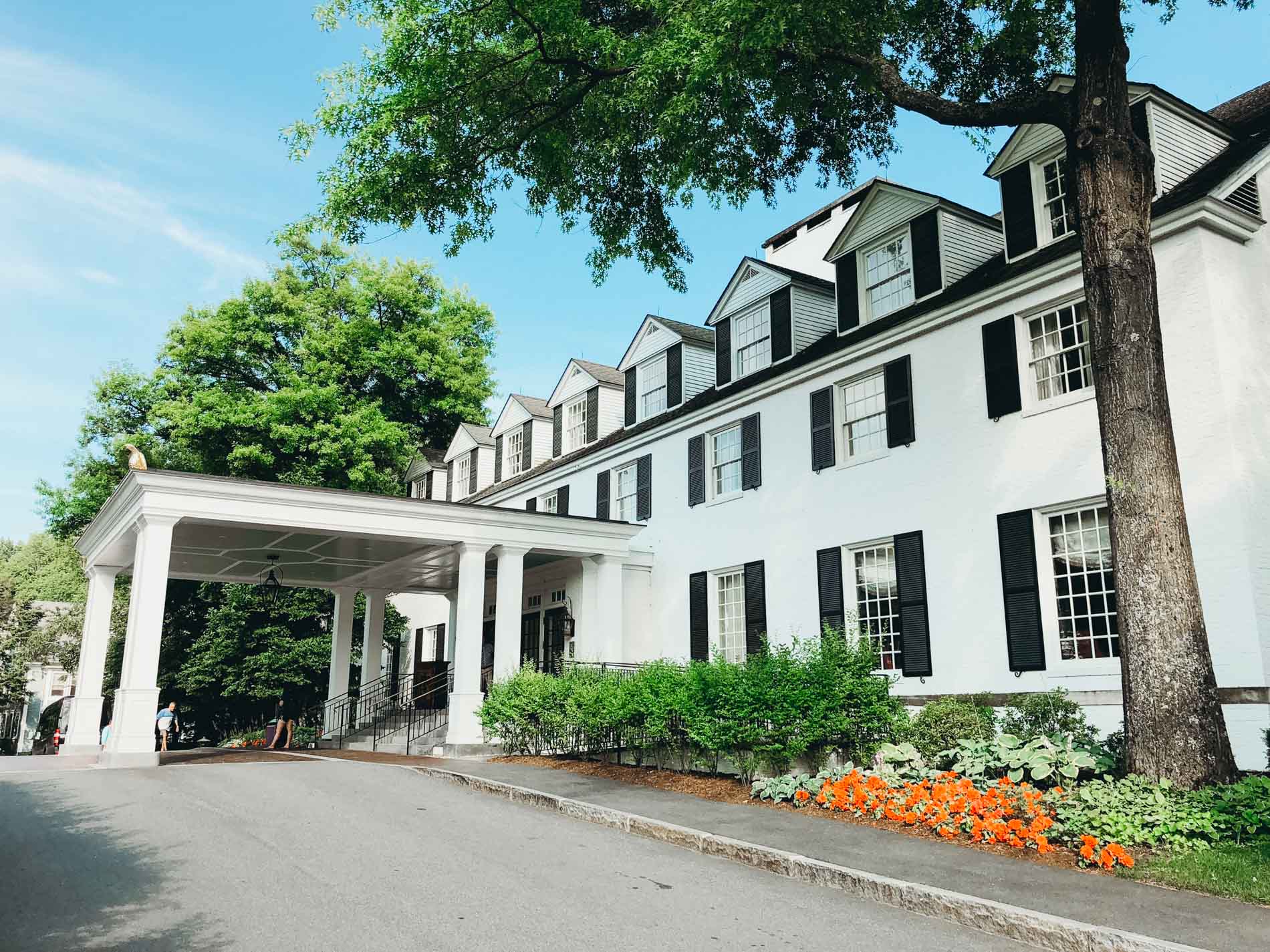 The Woodstock Inn and Resort graciously hosted us for the two nights that we were there. When we pulled up to it, it was so grand and welcoming. We were so excited to have finally made it!

We checked in, dropped everything off in our room (which was adorable and had like a cute little cottage vibe), and headed outside to enjoy the weather.

The Woodstock Inn and Resort has these cute bikes outside that you can rent and ride around downtown. We didn’t do that but it seemed like a popular thing to do as we saw many guests doing it! 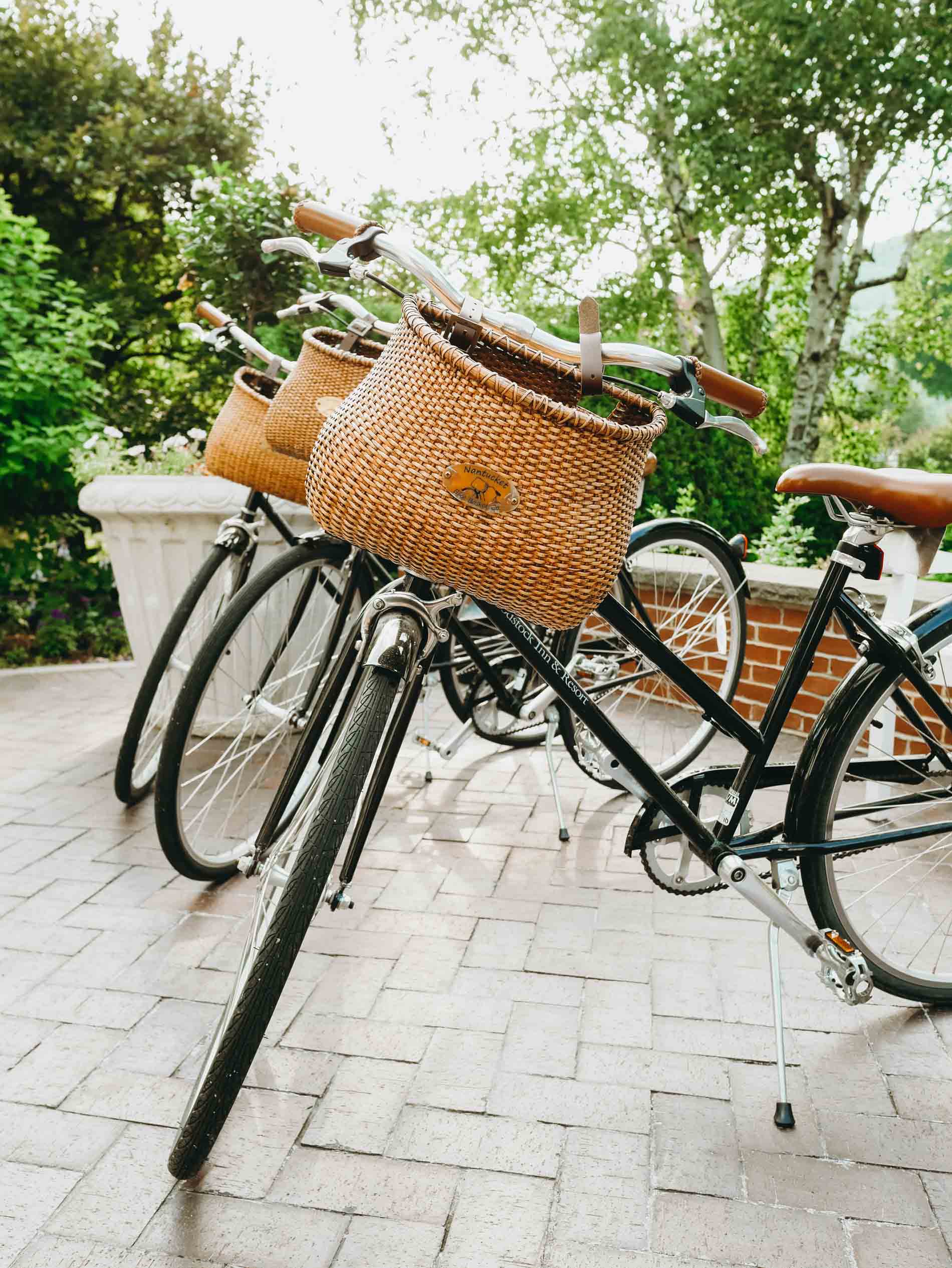 Where to eat in Woodstock, Vermont 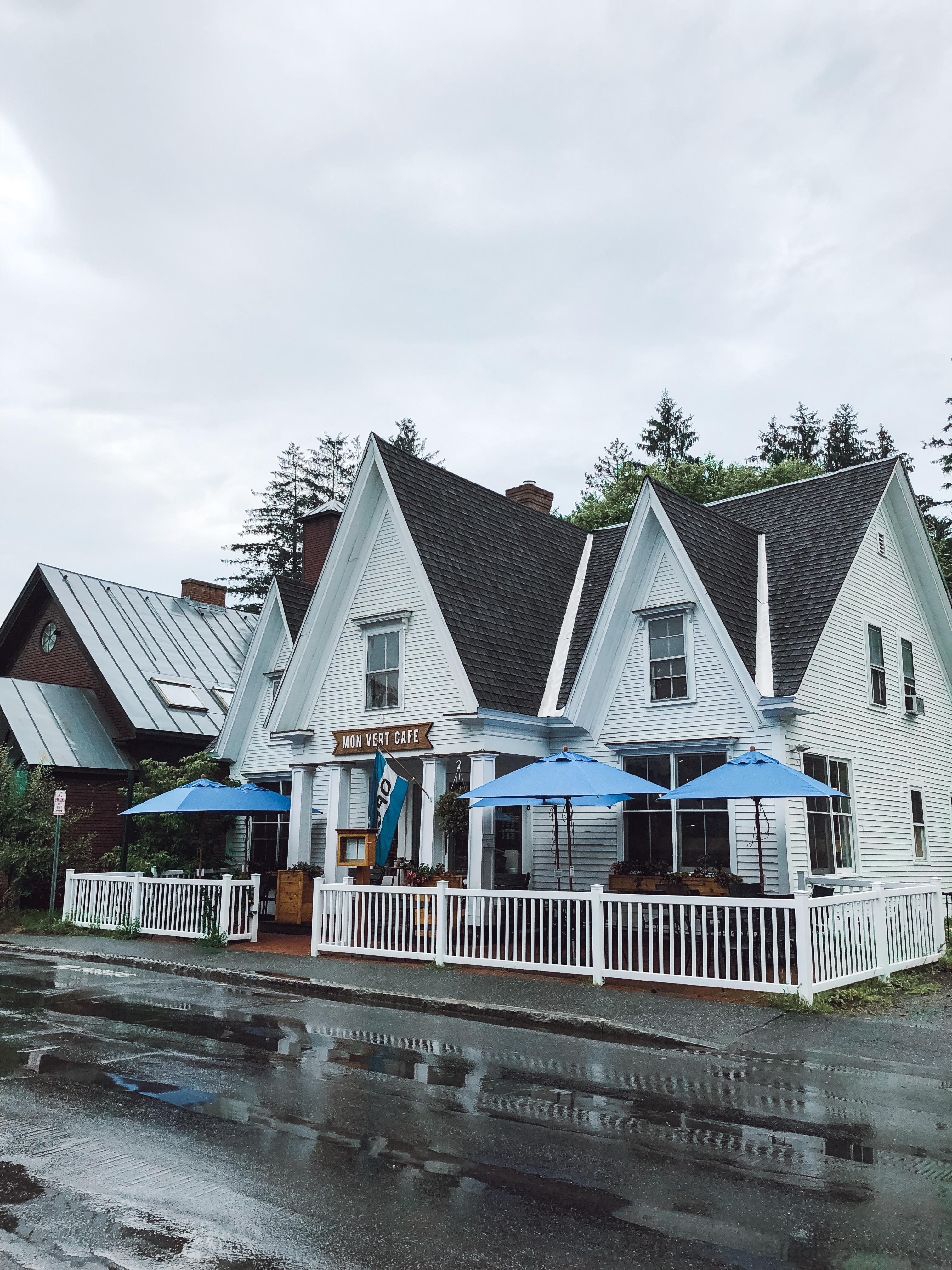 COFFEE and FOOD! We stopped at Mon Vert Cafe and we actually came here twice on our trip because their coffee and food was just that good!

Pretty much everything on their menu was from local farms and/or made in-house. They even used Cabot cheddar cheese! 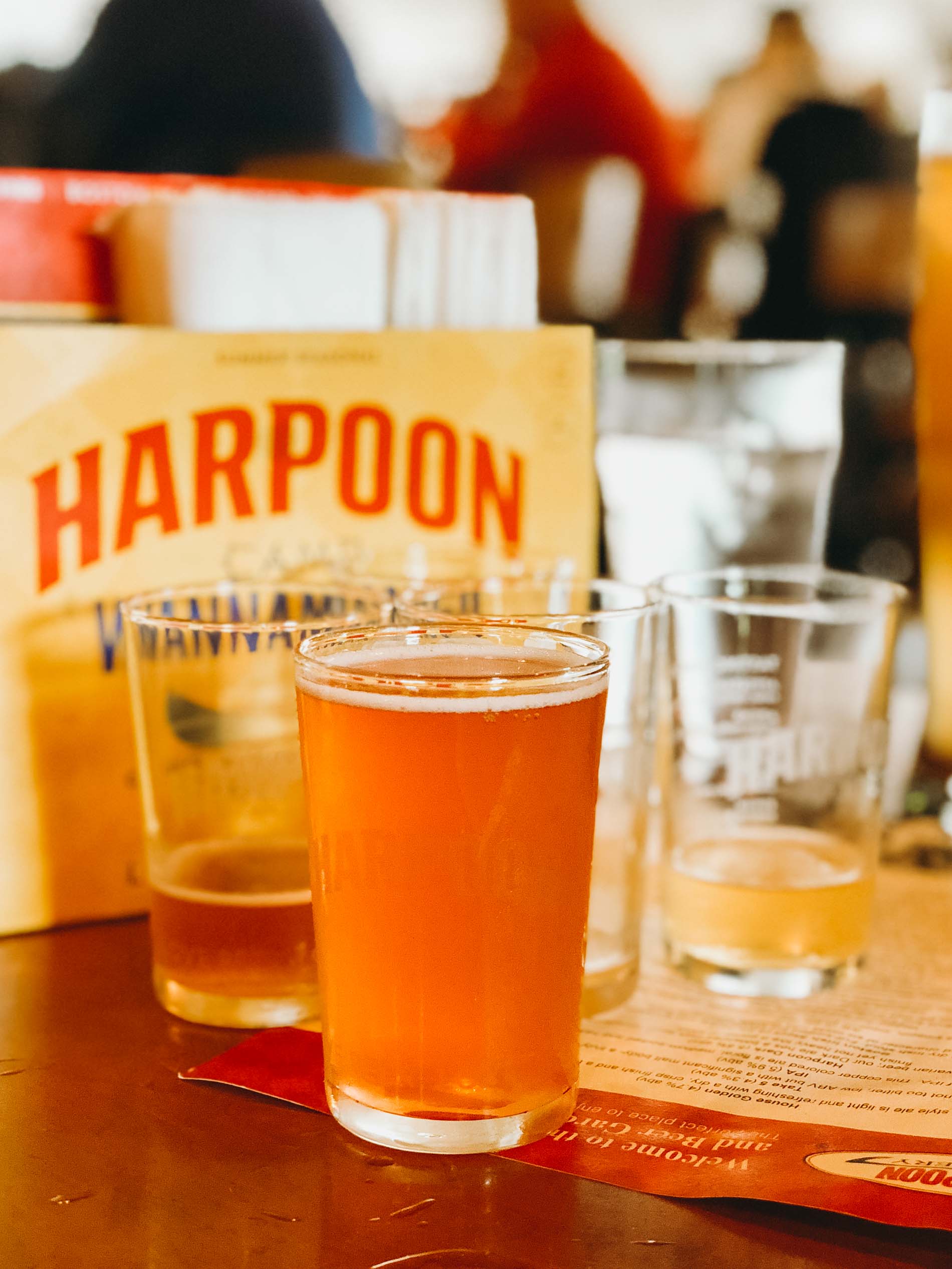 Vermont is the nation’s number one brewery state per capita, with more than 35 breweries. That is music to Jason’s ears because he is a beer connoisseur!

With that said, we HAD to stop into Harpoon Brewery! It was packed when we got there but the place was big enough so that we were easily seated.

They had an awesome menu (we ordered onion rings, fries, wings, and a sandwich) but the beer was the star of the show. I tried their pink lemonade shandy and it was refreshing and so delish! They also had a pineapple beer that was delightful as well! 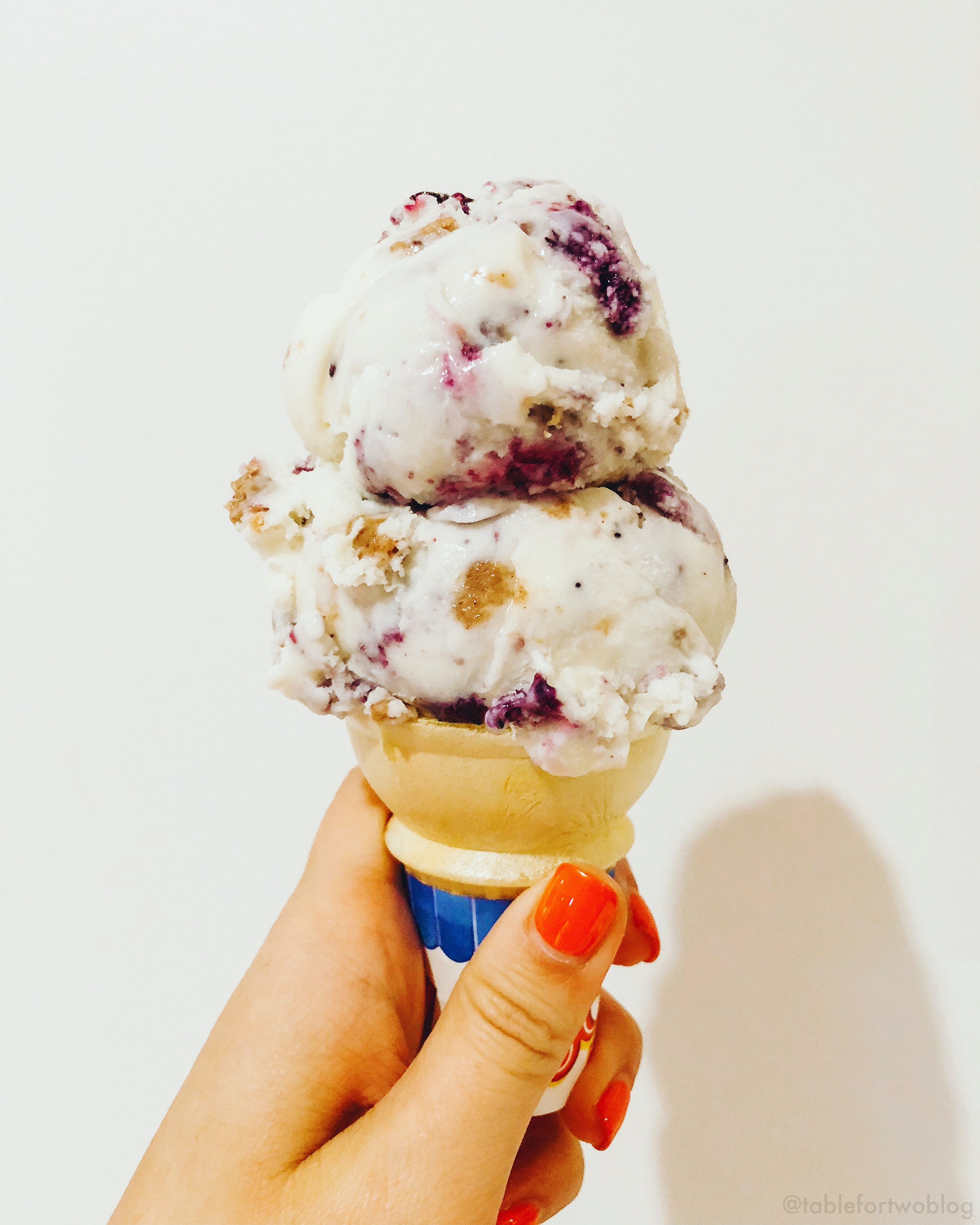 Omg, we went to White Cottage Snack Bar one evening to get ice cream and they had so many flavors but the one that called out to me was this one: Blueberry Oat Crumble. It had actual crumble throughout it and you could taste the cinnamon sugar that laced the ice cream and the blueberries were fresh. It was literally like a pie in ice cream form. SO GOOD!!

Things to do around Woodstock, Vermont 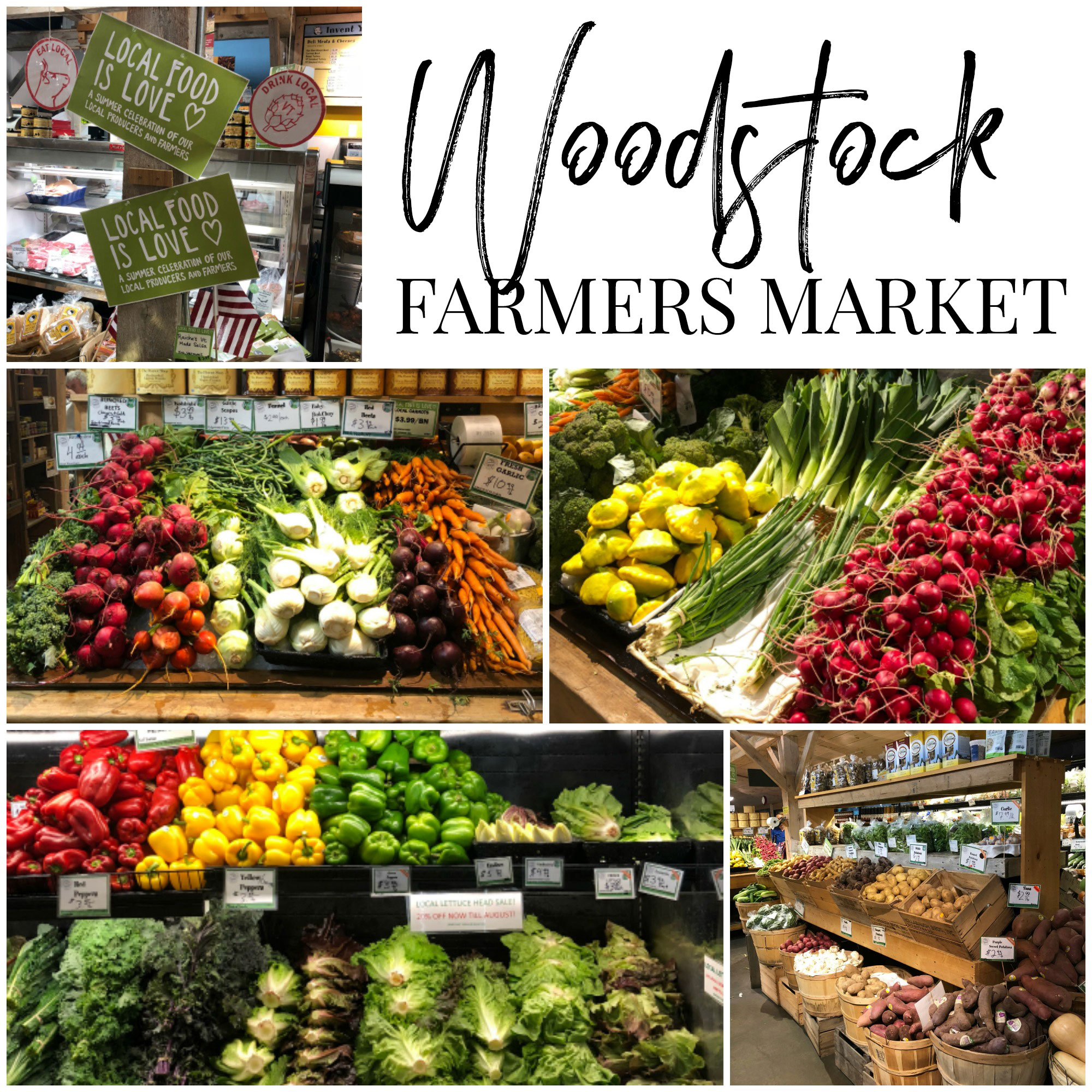 You know I love a good farmers’ market and stopping into local markets to see what local products they have. Woodstock Farmers’ Market has an abundance of local produce and products. Every nook and cranny of the store was filled with something local — from their cheeses to the maple syrup to the pastries and produce! 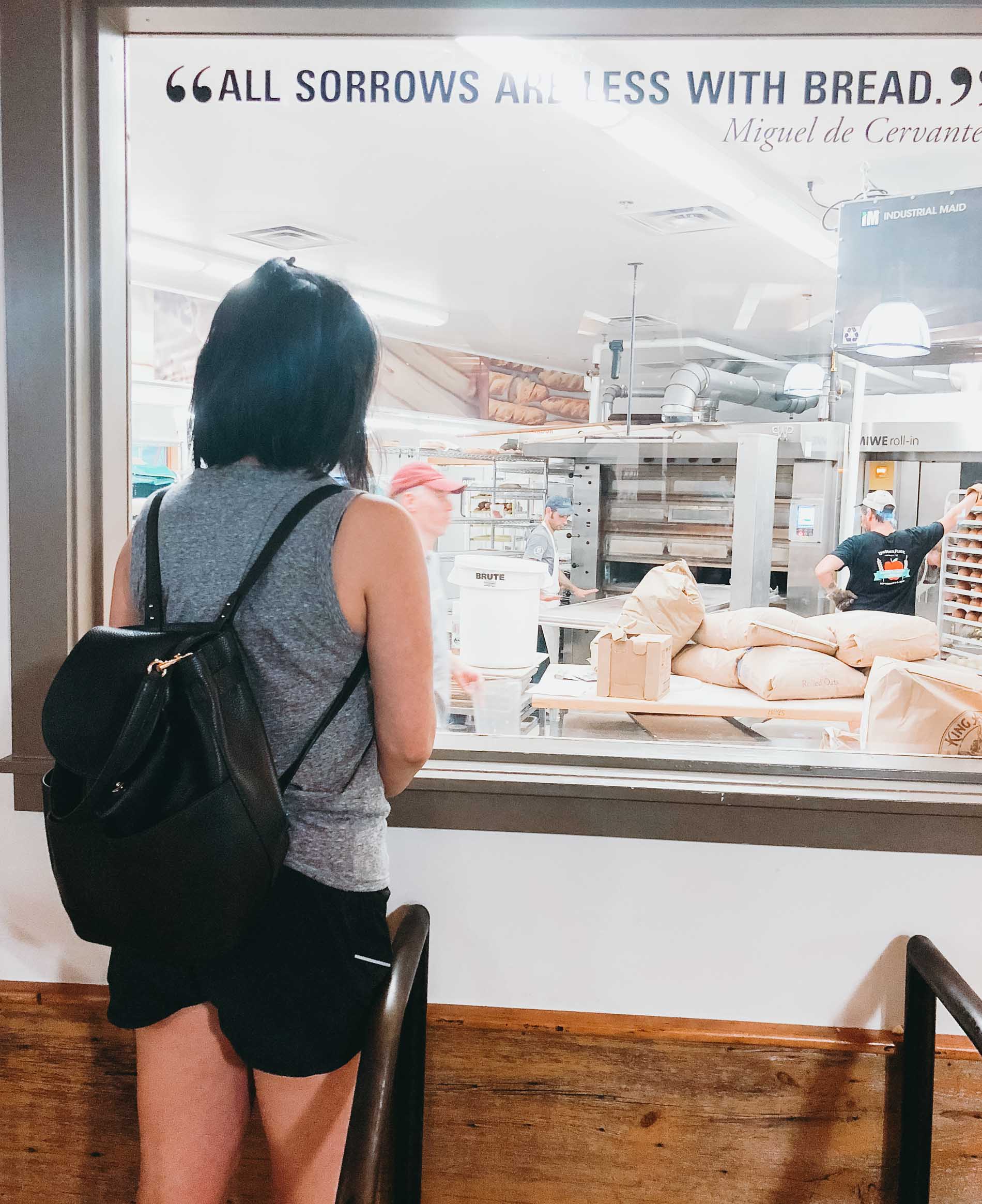 It was so fun to watch them bake. “All sorrows are less with bread.” Amen! 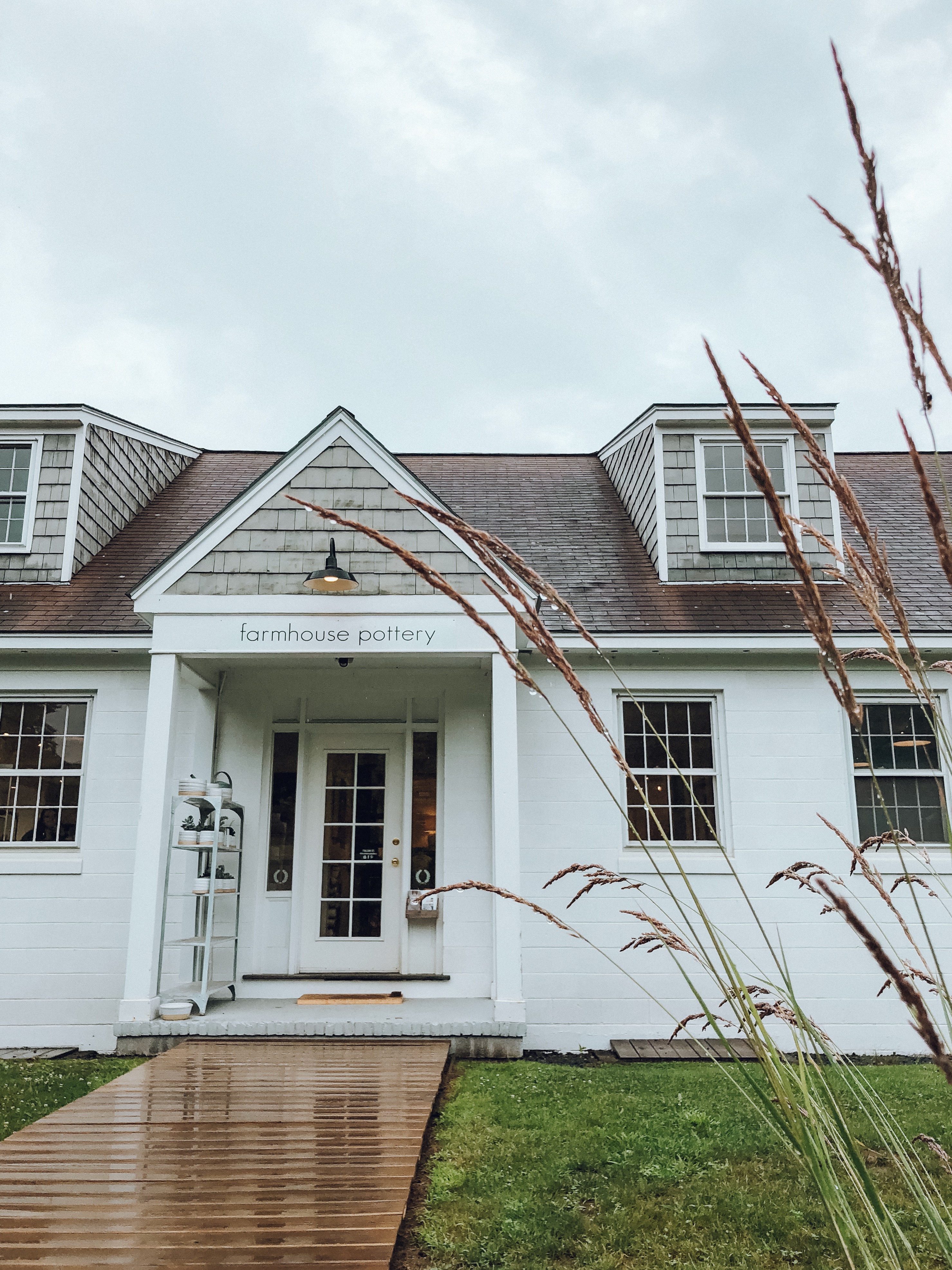 Okay, next stop is a food blogger’s DREAM. The renowned Farmhouse Pottery.

If you love food photography and are sourcing props, you know the name and omg, their store is JUST AS DREAMY as their products. I was obsessed and I could’ve spent ALL day in there. 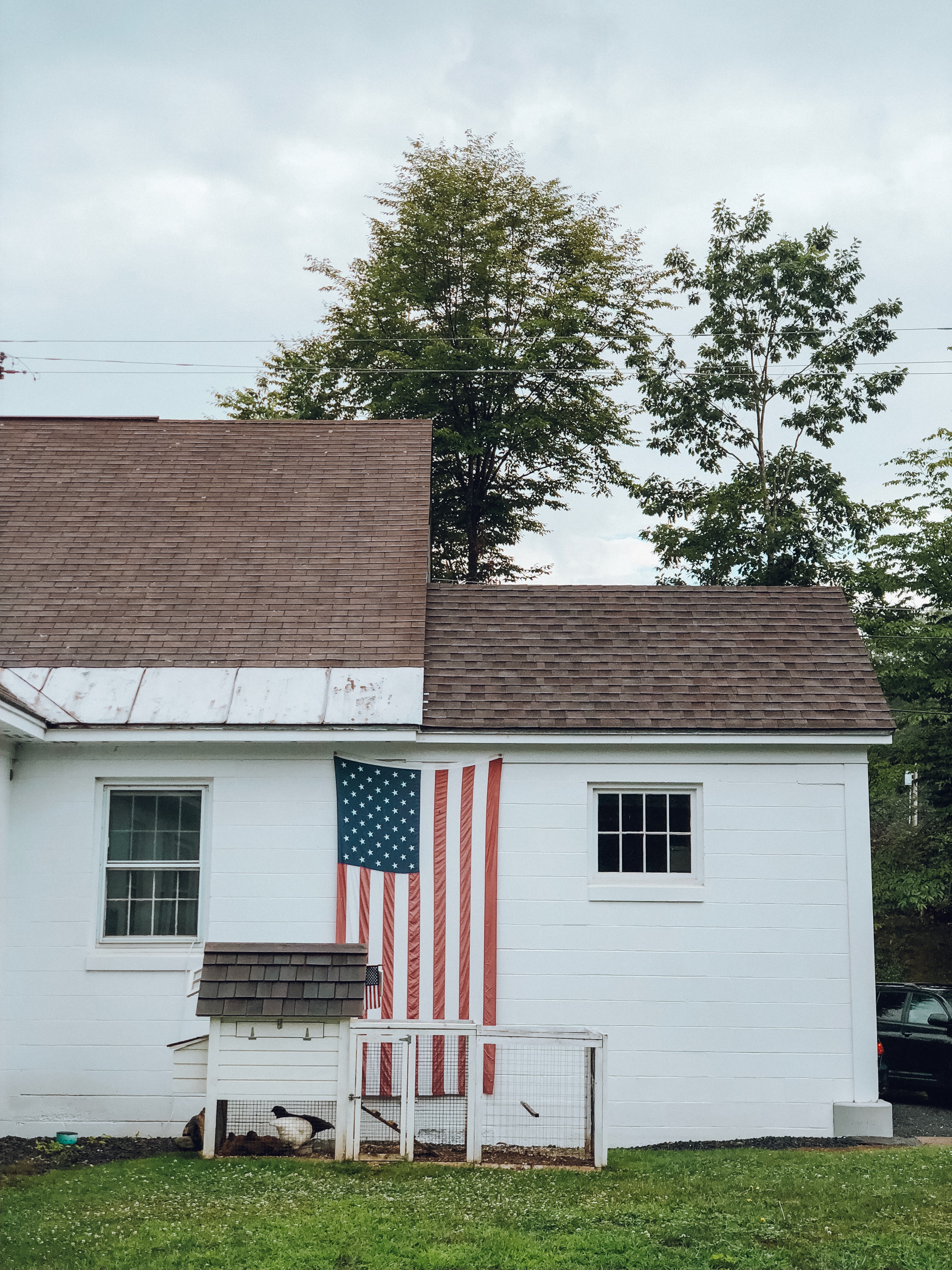 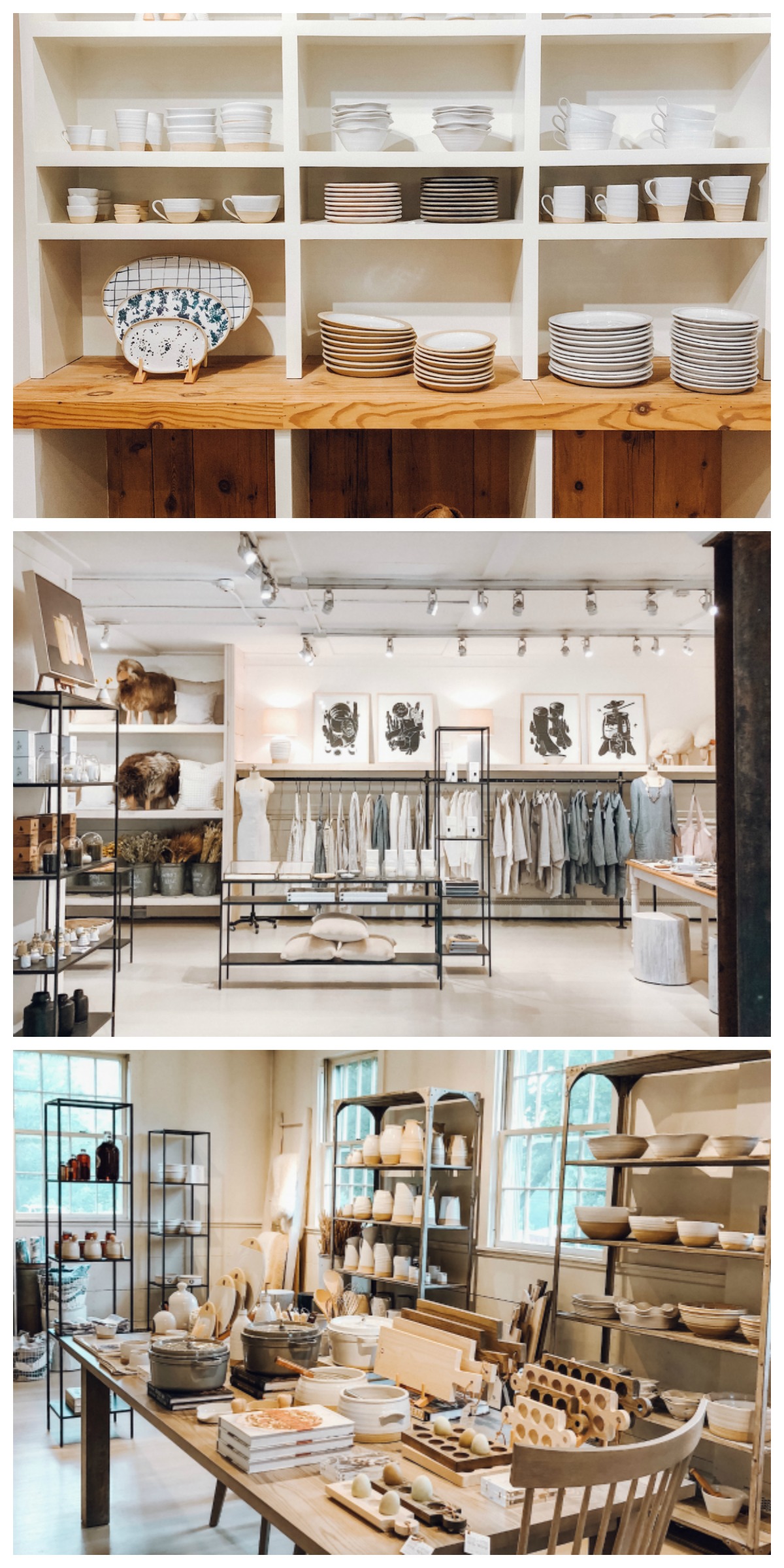 It was incredibly mesmerizing watching them make the pottery right on site in the workshop! 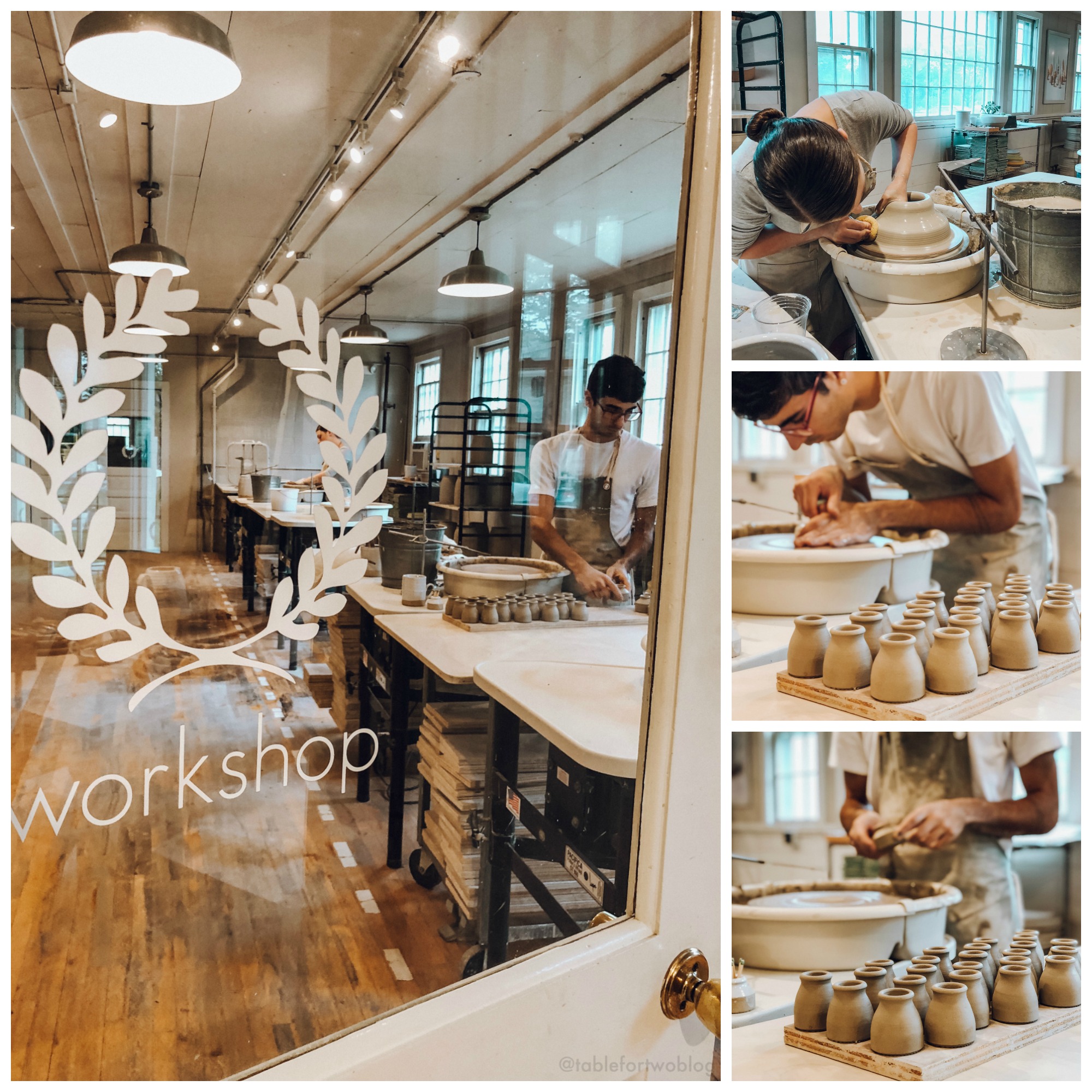 The famous Quechee Gorge was next on our list. Since it was raining most of the day that we were there, we saved the Quechee Gorge for when the weather cleared up a bit.

Omg, this was a sight to see. It was jaw-dropping but also knee buckling because I’m afraid of heights and the bridge/overlook literally goes right over the gorge. I couldn’t look down otherwise my legs gave out BUT it was so worth it. It’s beautiful and crazy what nature can do.

You can actually go on the trail and walk down the gorge to get a different perspective but since it was misting, we didn’t do that. Vermont actually has more than 1,000 miles of hiking trails and I bet the views and wildlife sightings are amazing! 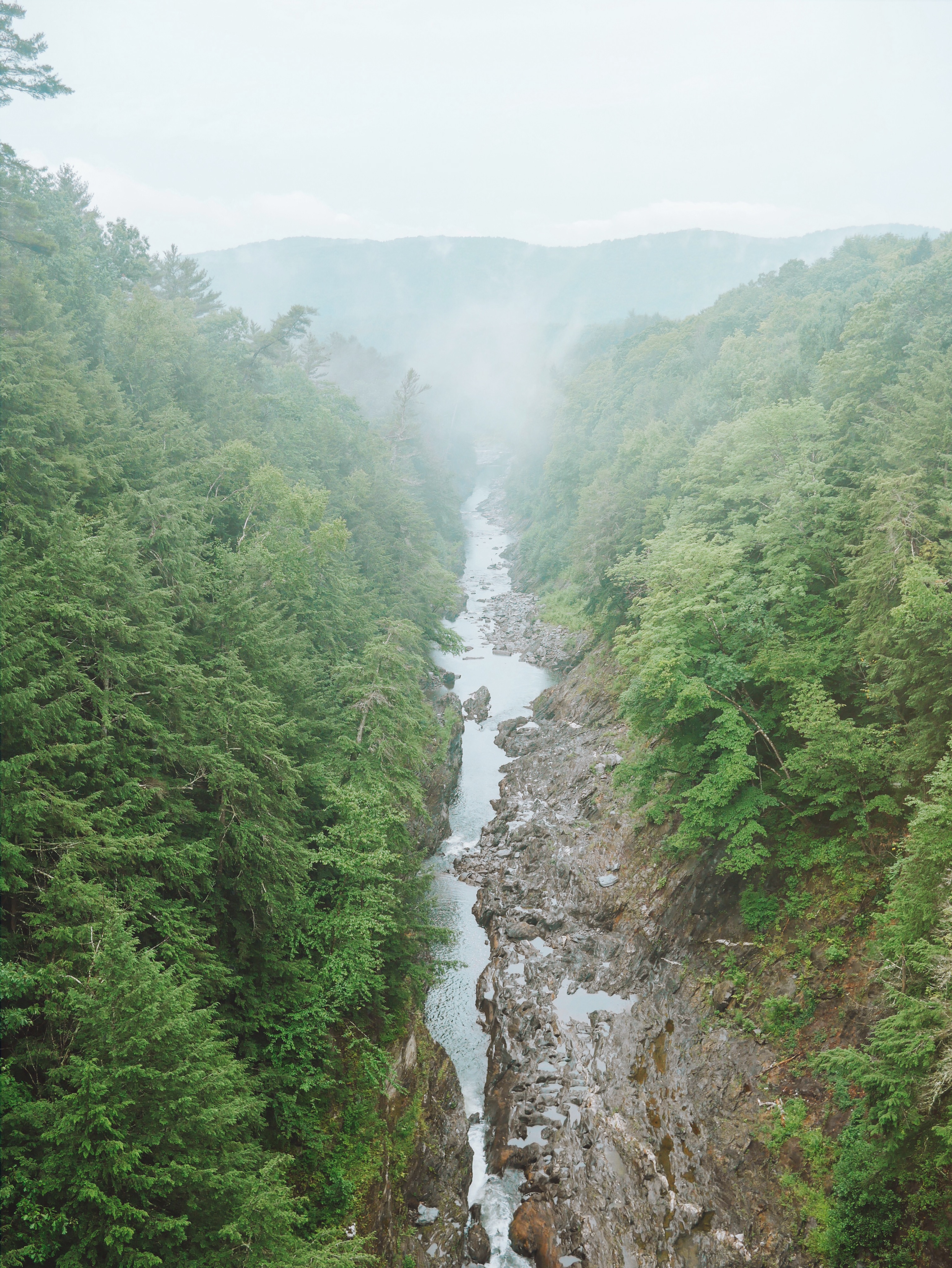 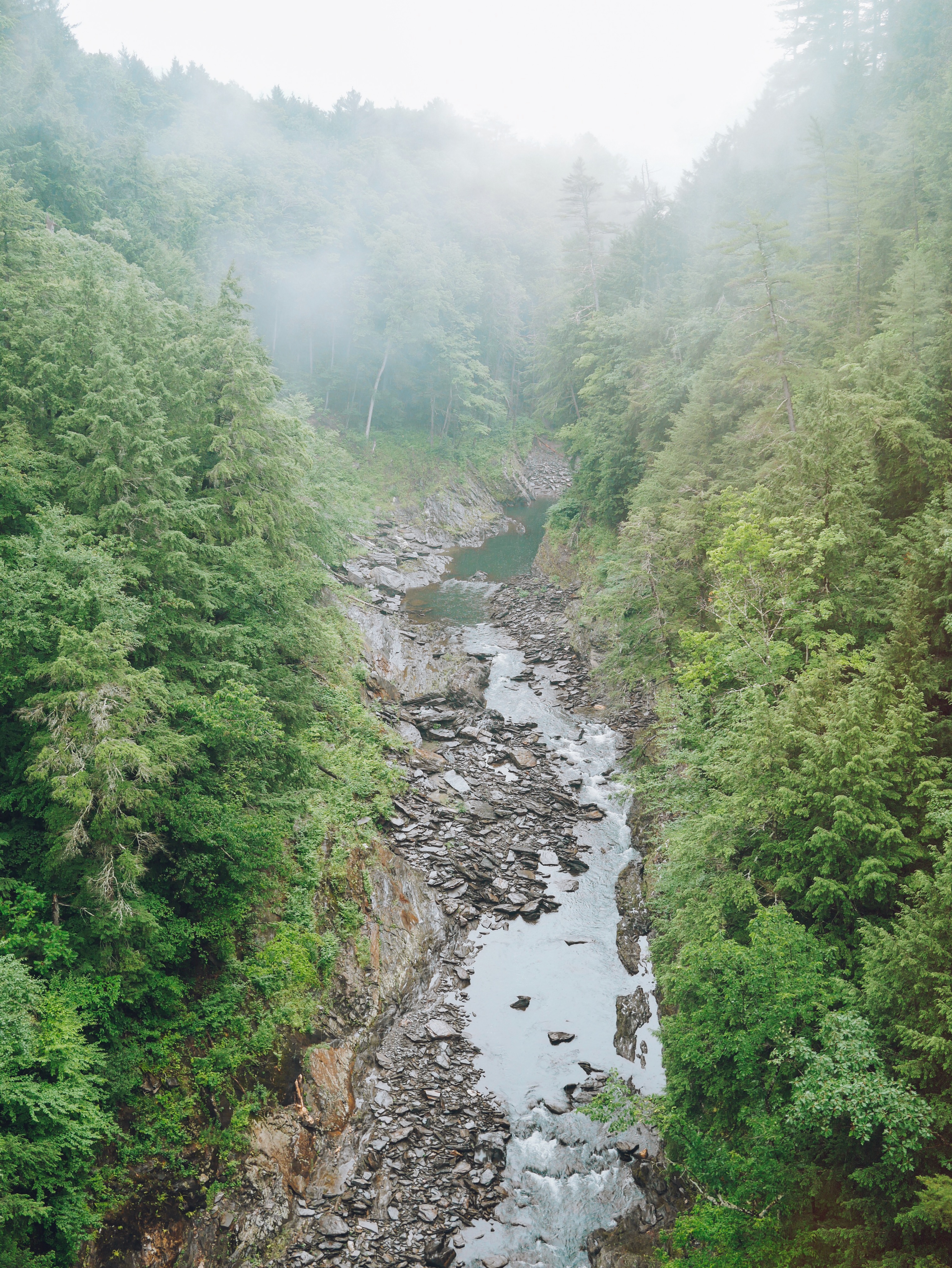 A quick stop at a Cabot retail store where we loaded on cheeses, spreads, and butter that we can’t get in Virginia! 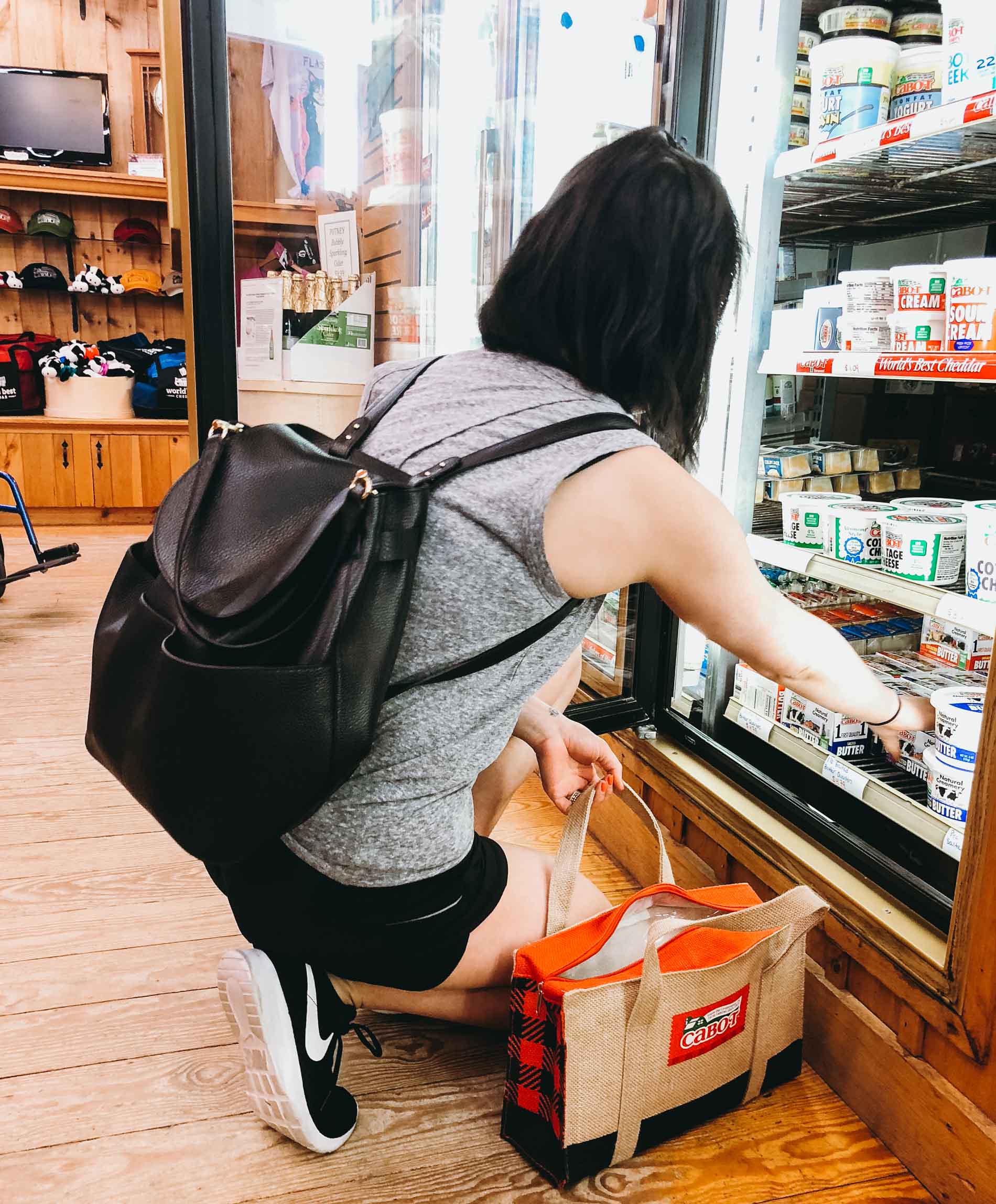 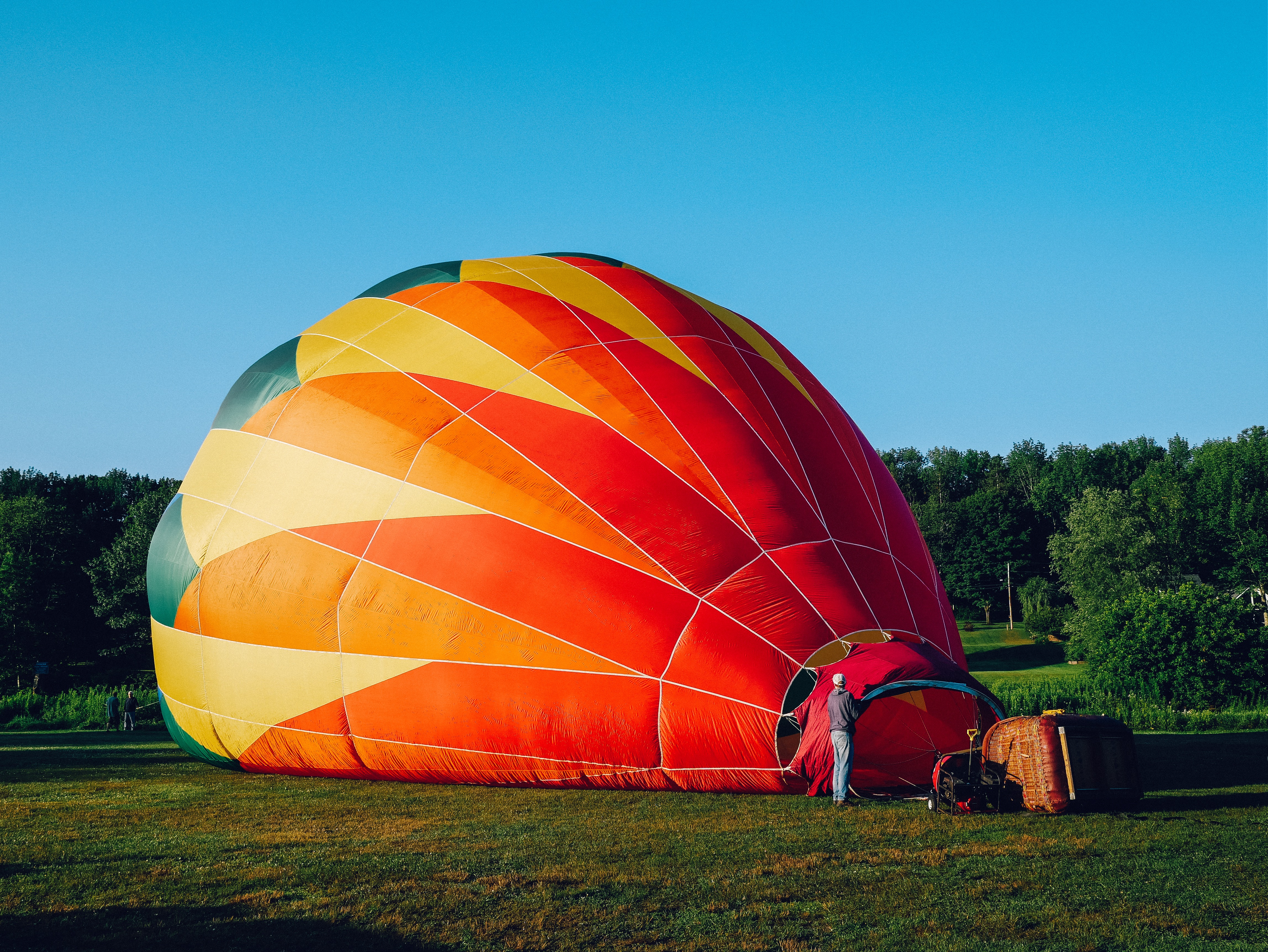 YOU GUYS. WE WENT ON A HOT AIR BALLOON RIDE.

Oh my goodness. It was beyond unreal. And shockingly, because we’re “contained” I didn’t have any fears in terms of my fear of heights.

We went with Chris of Quechee Balloon Rides and he seriously made the entire experience so worry-free. The fact that you can’t really steer the balloon and just go with the wind was kind of nerve-wracking but after talking to Chris about his experience and all the scientific knowledge he had; I felt 100% safe with him.

We met him out on the Village Green where he went through a safety briefing and then they started blowing up the balloon!

He did a final check of the wind (by sending a test balloon up in the air to see the wind speed and direction), got the all clear and we climbed into the basket to set off on our flight! 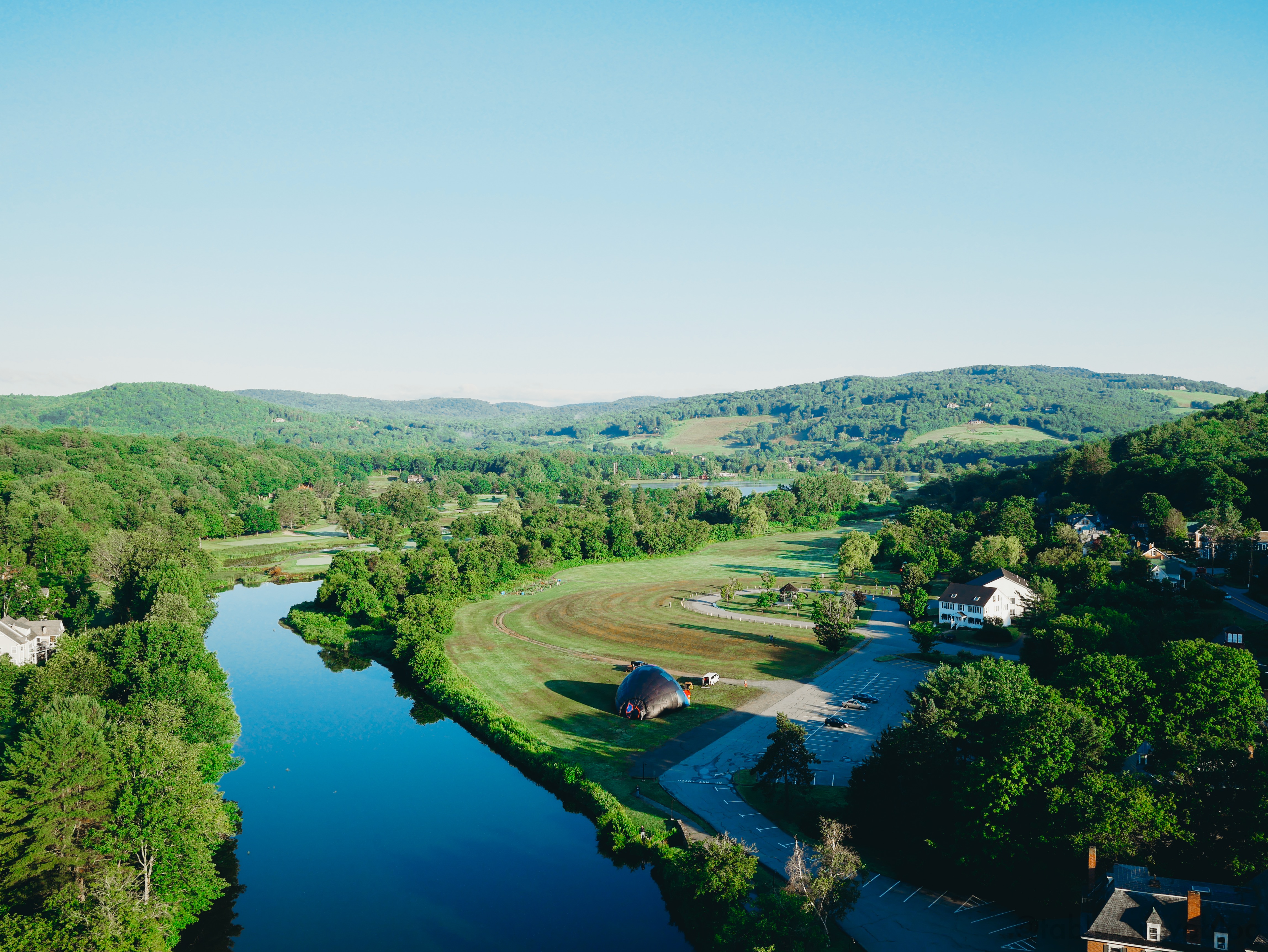 The entire flight was really peaceful and serene. We actually ended up floating faster than he predicted because the winds started to pick up and we had to land a little bit quicker than anticipated but it was all good!

We found an open field and landed in it. That was quite the experience, haha.

Upon landing, we were driven back to our cars and Chris’ mom had made fresh blueberry muffins along with a bottle of champagne and orange juice. The hospitality was so sweet! 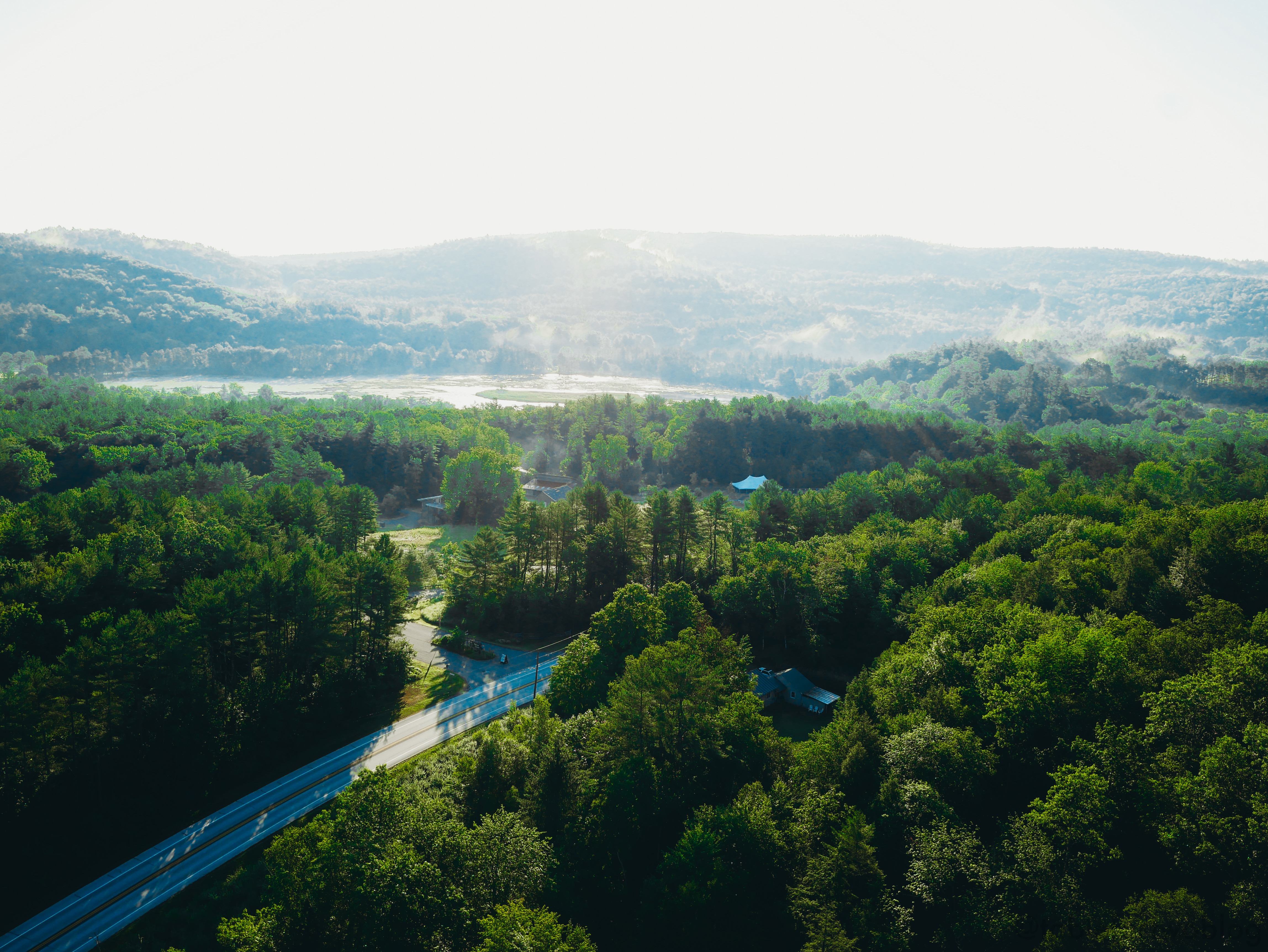 You can definitely see why Vermont is nicknamed the Green Mountain State! 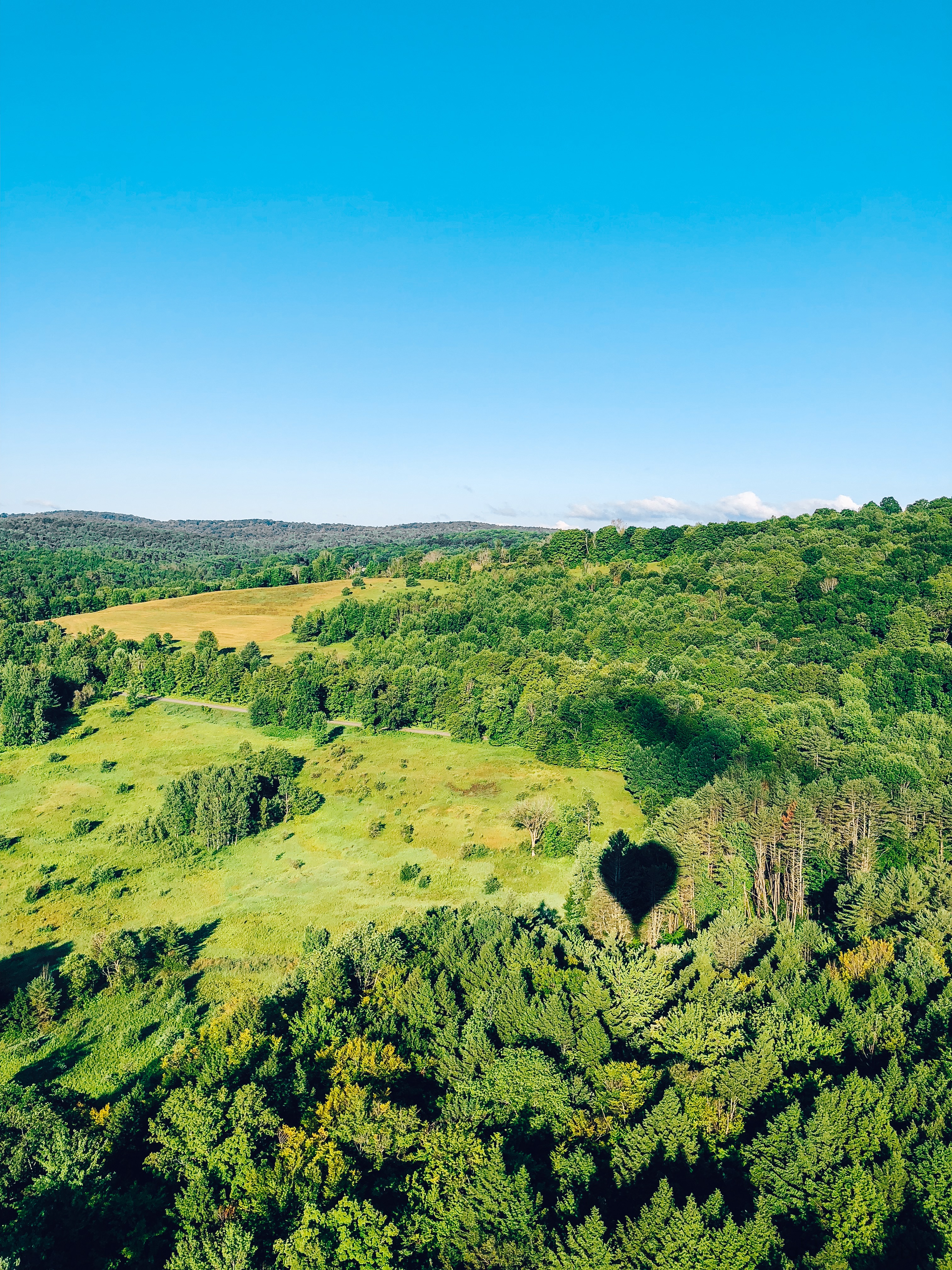 This was my favorite photo I took on our ride. The shadow of the balloon amongst the tree top really gave you gauge at how high up you were and how grand the view was. The heart-shape of the balloon shadow was a cute touch :)

Next up, I’ll share with you our trip to a Cabot dairy farm and a recipe using Cabot cheese! We went to Richardson Family Farm one evening and visited with the most darling Jersey milking cows and the sweetest family that owns them. I can’t wait to share more!! Here’s a pic of the sweet cows that I’ll introduce you to on my next post! 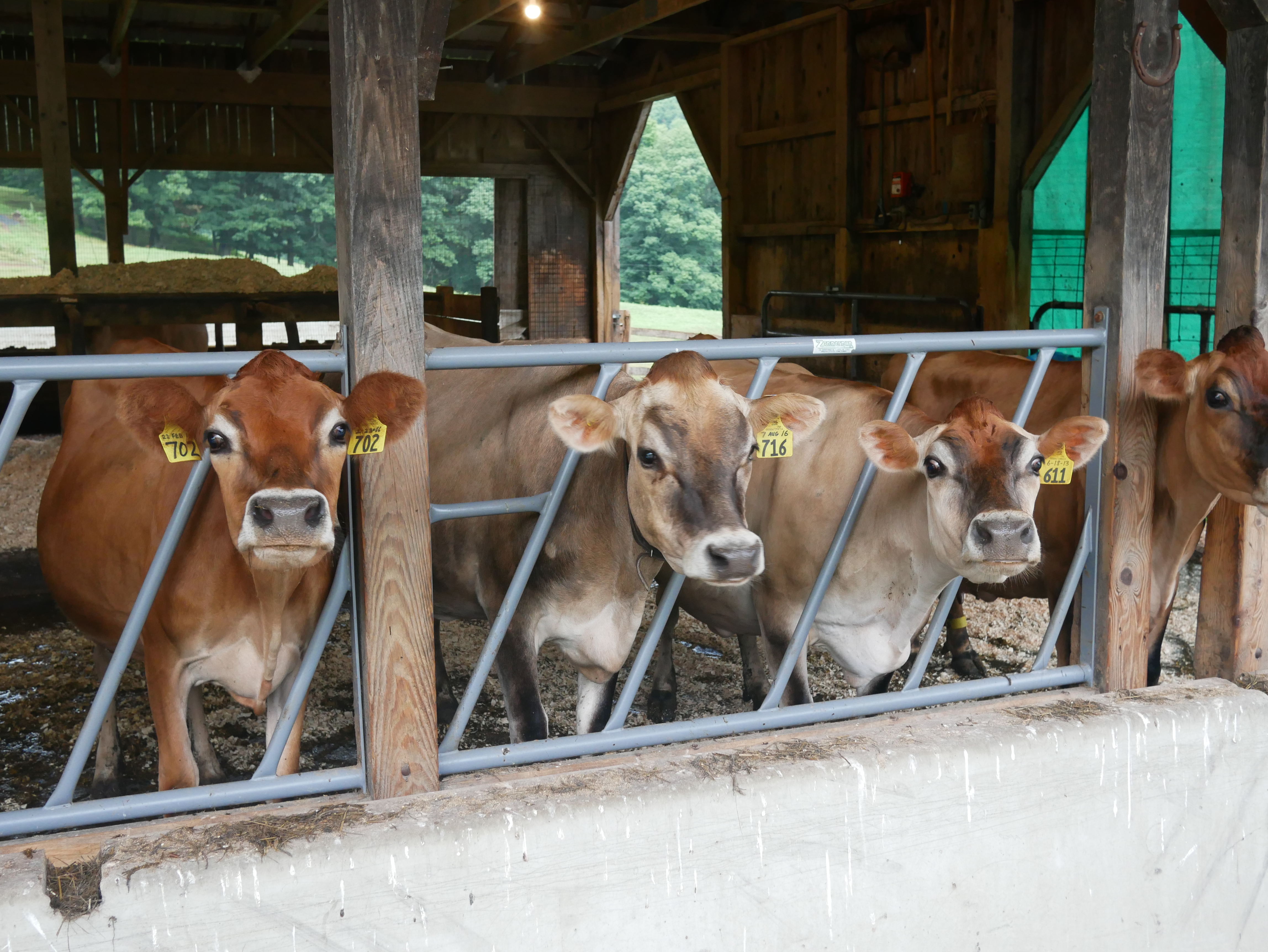 and are there any small log cabins to rent ?

you could try airbnb or vrbo, etc. and see! always lots of rentals on those sites

what does it look like during the Christmas season

i'm not sure, i wasn't there during Christmas season

We always go to VT in the winter, but this trip has me wanting to go now! I loved watching your Insta stories during the trip :)

Aw, thanks for following along!! Definitely go in the summer! It's so beautiful and the weather is amazing!