This recipe for duck fat potatoes is an elevated take on classic potatoes. They are crispy, flavorful, and simply addicting.

Have you ever had duck fat potatoes or duck fat fries at fancy restaurants? Every time I see it on the menu, it’s an “ohh-ahh” moment because it just sounds so fancy and bougie. I will say though, I love the extra crispiness that the duck fat brings to the potatoes. It also has a richer flavor. You’ll be hooked and not want to make potatoes any other way!

Fried potatoes of any kind are my kryptonite. I even gave up french fries one year for Lent (it was rough). I will take them in whatever way as long as they’re crispy on the outside and soft and pillowy on the inside. These remind me a lot of patatas bravas as well. Honestly, potatoes are probably the one thing I would never eliminate from my diet, lol

Duck fat potatoes have been around for centuries and were originally popularized in France. They gained popularity in the United States in the late 20th century as duck fat became more widely available. Duck fat potatoes are now a staple at many restaurants and are beloved by potato lovers for their crispy texture and flavor. They can be served as a side dish or main course, and they are often enjoyed with dipping sauces.

For the exact measurements, be sure to check out the recipe card at the bottom.

How to make duck fat potatoes

For entire process and exact directions, check out the recipe card at the bottom.

Preheat the oven. Set the oven to 450 degrees Fahrenheit.

Shake, shake! After they’re fork tender and drained, shake the potatoes in the pot so it roughs it up a bit. It helps it develop a crispier exterior with the roughness.

Finish cooking in the oven. Once the potatoes have developed a browned exterior on the stovetop, you’ll want to finish the potatoes in the oven until they’re golden and crunchy.

These duck fat potatoes are best enjoyed fresh, but they can be stored in an airtight container in the fridge for up to 3 days. Reheat in a 350 degree Fahrenheit oven until warmed through.

What types of dipping sauces would be good with these? Dipping sauce are my favorite!! Here are some great ones:

Can you make all this in the oven instead? Sure, you could roasting the potatoes instead of frying them in the skillet first. Simply toss them in duck fat and seasonings after you’ve parboiled them, then roast in a preheated oven at 400 degrees Fahrenheit for 20-25 minutes, or longer if it needs to be more crispy. Frankly, I like doing it in the skillet first because it helps with the initial crisp of the exterior. 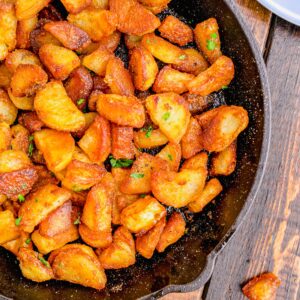 If you live in a warmer climate, your grease may not be solid in the summer if left out at room temperature, that’s no problem! Only boil the potatoes until just for tender, if you overcook them they will break apart and get too mushy when shaking them.