Apple-scented, cakey, and perfectly spiced, this apple cider doughnut recipe is going to be your new favorite fall tradition. Bring on apple season!

The effort to make this apple cider doughnut recipe is so worth the gorgeous cinnamon sugar covered fried dough goodness. I recommend that you eat these hot out of the frier, freshly dusted with cinnamon sugar. You can’t get that experience anywhere but your own kitchen!

The ingredient list might look long, but don’t worry—you probably have most of these items on hand already if you like to bake. Here’s what you’ll need to make apple cider doughnuts:

Here’s a step-by-step guide to making your own apple cider doughnuts at home:

Cook down the apple cider. Pour the apple cider into a small saucepan and bring it to a boil over high heat. Continue to boil for about 12 minutes, or until it’s reduced by half. Remove from heat and set aside to cool.

Mix the dry and wet ingredients. Whisk the flours, brown sugar, baking powder, salt, baking soda, and spices in a large bowl. In a medium bowl, combine the eggs, butter, and cider.

Combine the wet and dry ingredients. Make a well in the bowl with the dry ingredients, and pour in the wet ingredients. Use a spatula to fold the flour into the liquid until a sticky dough forms. Cover the bowl with plastic wrap, then place it in the refrigerator for about an hour, or until the apple cider doughnut dough is firm enough to shape.

Roll out the dough. Sprinkle a work surface with flour, then divide the dough in half. Place the first half onto the surface, roll it out into 1/2-inch thickness, then use a doughnut cutter to cut it. You can repeat with the scraps of dough left behind, then with the remaining half of the dough.

Make the cinnamon-sugar. Combine the cinnamon and sugar in a shallow plate or bowl—there should be enough room to set a doughnut in it. Set aside.

Fry the doughnuts. Heat the canola oil to 325ºF in a heavy-bottomed pot. Carefully add the apple cider doughnuts to the oil, 2 or 3 at a time, and fry them until they’re golden brown, about 2 to 3 minutes on each side. Place the doughnuts on a paper towel to soak up the excess oil, then toss them in the cinnamon sugar.

If you want to make perfect apple cider doughnuts every time, here are some tips to follow.

Can I Bake Apple Cider Doughnuts?

I haven’t baked this apple cider doughnut recipe myself, but I adapted it from Taste of Home and they say that it can be baked in a doughnut pan at 350º for 15 to 18 minutes. Note that the flavor and texture aren’t the same, though!

How to Store Homemade Doughnuts

I’d be shocked if you have any leftovers, but if you do, they’ll keep for up to 3 days in an airtight container at room temperature. 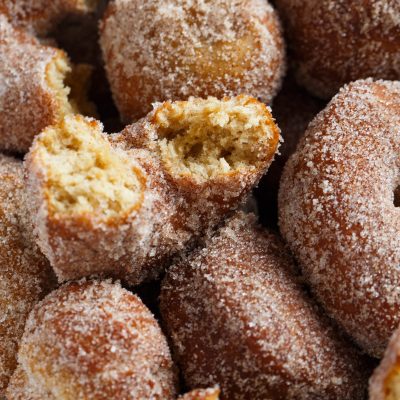 Recipe from Taste of Home

Can i substitute white flour for the wheat flour? Can I substitute vegetable oil for the canola oil?

I haven't tried it with regular AP flour for the wheat but it should work. Vegetable oil doesn't have as high smoke point as canola oil so might not be as good for frying.

hi, i was just wondering how many doughnuts this recipe yields?

hi! sorry - i thought it was in the recipe but i guess it never made it in. it makes about a dozen + the doughnut holes!

Would it be possible to modify this recipe to bake the donuts instead of frying?

Hi, I don't think you could bake these donuts. I feel like there needs to be different ingredients for this to be baked, however, I am not positive either because I haven't tried this myself. Sorry!

Hi, absolutely not! The apple cider is what gives the donuts the apple cider flavor. If you use vinegar...well, your donuts will taste like vinegar!