Home » Living » I Embraced Freckles After A Lifetime of Hating Them

If you showed me this photo of myself in middle school or high school, I would take it into Photoshop and erase all the freckles.

I grew up with the idea that freckles meant imperfect.

I grew up wishing I had the perfect complexion, freckle-free.

I hated looking at myself in photos and I hated the way I looked.

My family would always talk about my freckles and how dark they were when I had been in the sun and how I had them because I didn’t eat all my rice (it’s an old Chinese wives tale).

I have two moles on my face. One on my cheek and one on my chin. I hated them.

It affected the way I saw myself. Every time I saw a photo of me, I would cover up my mole and think, “I would be so much prettier without that.”

I hated my moles so much that when my mom suggested I laser them off, I went ahead and did it. I think I was only 14.

14 and already lasering my face to alter it into something that was more socially accepted.

Except, I don’t think society was rejecting me for my freckles and moles. It was culturally. 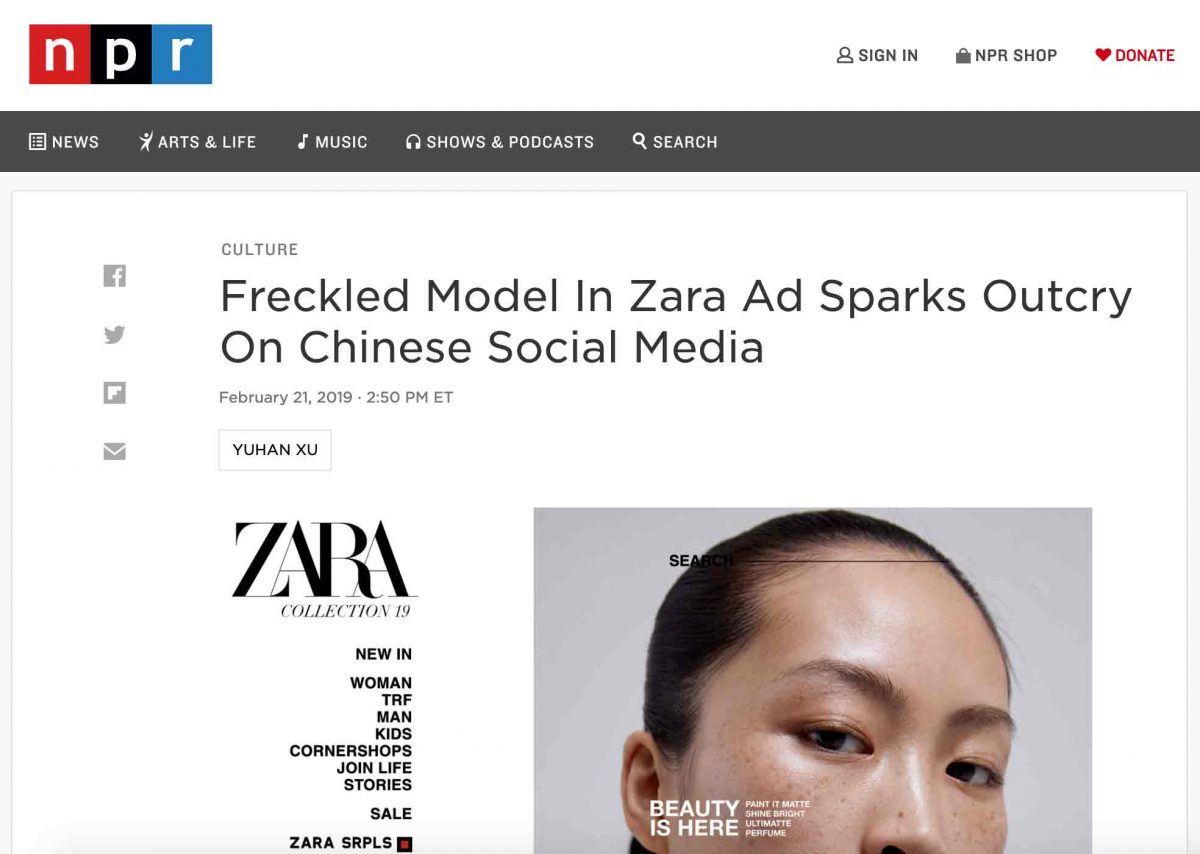 Jason sent me this article on NPR several weeks ago and it immediately brought me back to childhood.

In the Asian culture, freckles are seen as imperfect, ugly. A flaw.

In the Asian cultures, perfect skin means light, fair skin with no freckles.

Women in Asia use whiteners to lighten the color of their skin, stay out of the sun, and wear a lot of concealer to hide imperfections.

In America, it is opposite. We love to tan and we don’t cover up our freckles. We embrace them.

And, because I’m Asian and growing up with two Asian parents of course this is all I knew.

In fact, whenever someone complimented me on how “cute” I am and how much they “loved” my freckles. I literally would make a face and say, “really?!” – like I was taken aback and shocked that someone would think freckles were cute.

I hated them so much that I would never take any compliments on them. In my mind, my face was flawed.

I don’t necessarily fault my parents for any of this per say because that’s what they were brought up on, too, but I definitely grew up with extremely low self-esteem.

But, what’s ironic about all this is that freckles are genetic, lol – so it’s like there was nothing I could really even do. It’s not like I asked for them, haha..so the fact it was talked about so much just kind of makes no sense.

This is just simply a post to share how words can affect someone, especially at a young age.

Children are like sponges. They hear and take in more than you know and it can affect them in ways that you don’t realize would.

I don’t know if my parents truly realize how their constant critique of my freckles has affected me but it has.

I have bad days, still, where I wonder what it would be like if I just didn’t have freckles or if I could use more concealer to just hide it all.

My mom recently brought up that she thought my freckles were darker and she said it was due to dry skin.

So, it’s clearly still an issue.

Honestly though, it doesn’t bother me as much now as it did in the past. It’s still annoying, sure, because why are my freckles a big deal?

I don’t know what happened between college and now but I gained a lot of confidence during that time.

I think it was actually dating and having a boyfriend tell me I was pretty and having boys in college notice me.

I know that sounds weird but honestly, I had such low self-esteem that I truly thought I was ugly and that no one would ever think I’m pretty or want to be with me. 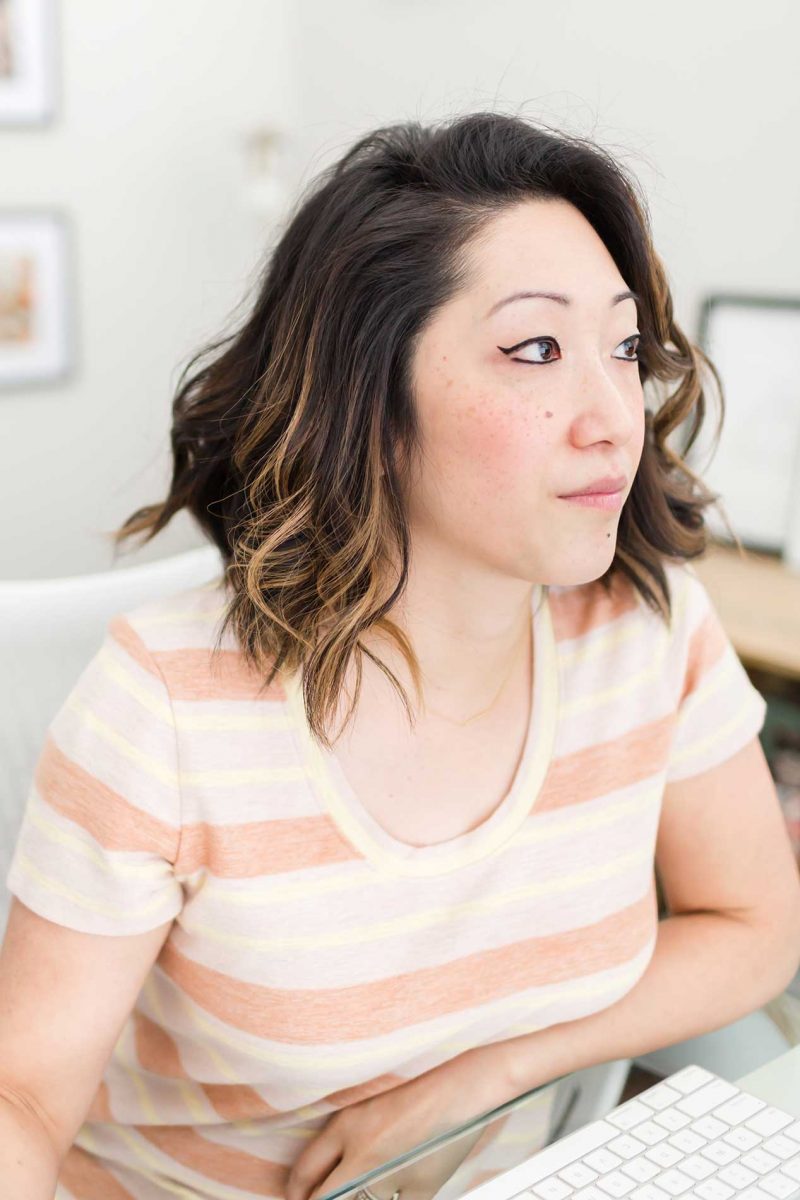 I’m in a lot better place today than I ever was.

I’m finally at peace with my freckles and I have accepted who I am.

My hope is that in this generation of women empowerment, we do just that.

We stop focusing on how someone looks and focus on what defines them. Their character, their drive, their ambition, their heart.

Thanks for writing this. I have very similar feelings about all my freckles and moles. I had close family members and friends make horrible comments about them all my life and I often wonder how this has shaped me as a person. I have so much more self esteem as an adult, but I still have days where the pain of what people have said to me over the years really hits me hard. Not sure how to overcome this and I wish it didn’t bother me so much.

i agree with you. i have a lot more self confidence and esteem now as an adult but i feel like i take a lot of things more personally than i should. it's like a permanent scar.

I'm Asian too with freckles all over my body. At a young age I have tried several creams that will make them go away to the point that it had burnt my skin that I had to go to the dermatologist to fix it. My Dr. told me that I actually cannot completely make them go away and she affirmed me that I have other qualities I should be thankful for and be proud of. That have change the way I see myself. I now live in Canada and now have the freedom to wear what I love without making other people stare at me. There are times that I still wish I do not have them. I really wish skin would not be a big deal in Asia as it damages self esteem like you mentioned. I hope someday I can completely love them the way you do.

Wow! I can totally relate to this. I can't say I've completely made peace with my freckles but there will be days I like that it sets me apart from others. And you're right. Words do matter and they can either break of make someone. People, be wise with your words. It can be a weapon.

This is such a sad truth. Words do affect our self esteem, and I certainly wish that all people hurt by words are able to overcome that, in the way that you did. Stupid question: you said you had them lasered off when you were 14, but they are still there. Did they grow back? (My son has one on his face he wants lasered off, so just wondering.)

Thank you! And no, not a stupid question; I should have addressed it. Yes, they grew back. They're just lighter in color now. Before they were black, now they're like a light brown.

Wow! I resignate with what you are saying at times our family or culture will make you feel insecure about your looks or something that makes you different. Btw I've always wished I had freckles. I thought they were cool!

Thanks! I totally embrace them now. People actually try to get freckles tattooed on their faces these days! How far we've come!