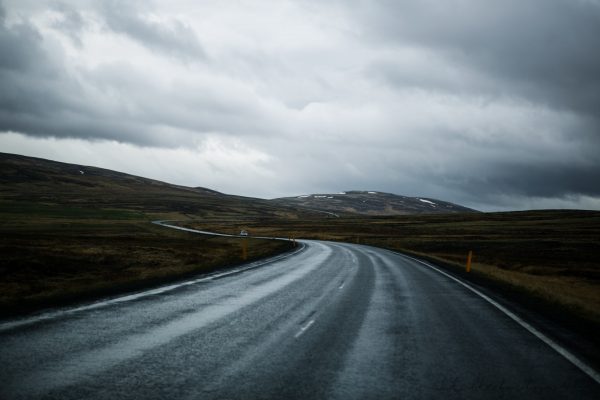 From Reykjavik, we headed out on the Golden Circle drive. I don’t know why it’s called the Golden Circle but it makes a perfect circle (more like a big oval loop) taking you out of Reykjavik to central Iceland and then back again. It’s one of the most popular trails in Iceland and pretty much everyone that visits will go. However, the cool thing about Iceland is that even though thousands of people do this circle, you will hardly be able to tell. There was not a single point where I was like, “man, there’s a lot of people.” It was all so desolate and sparse. Maybe it was the time of year we were there (early June) but in either case, it was an extremely scenic drive and we easily spent 6-7 hours on this trip. We couldn’t help but stop almost every mile on the journey. The scenery changes so fast. One minute you’ll be seeing mountains and the next you’ll be seeing flat lands or a huge lake.

Gas up before you leave Reykjavik so you have a full tank. We only used a quarter of tank the entire trip because the roads are so open and there’s no stopping and going. Just a road at high speed. It really saves on fuel!

Here was our plan on the Golden Circle drive:

Þingvellir National Park is huge. We did miles and miles of walking so get your tennies on! You’re literally walking between a canyon that was formed between two tectonic plates, which is a visual representation of continental drift of Europe. There was so much to see and I’m telling ya guys…Iceland makes you appreciate the beauty of nature SO much. Everything here is for your eyes to feast on. It wasn’t a food trip for us this time, it was strictly a nature trip for us and food came second (!!). 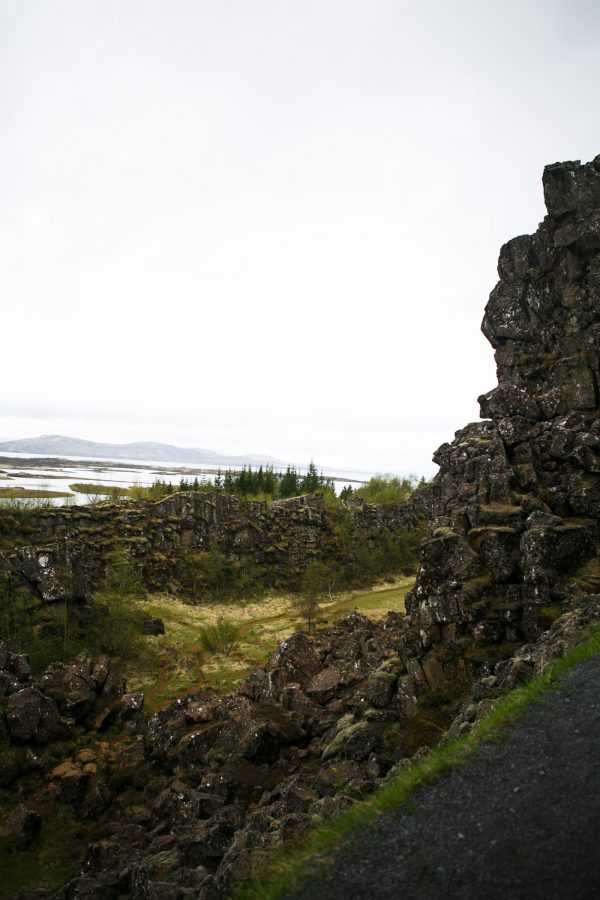 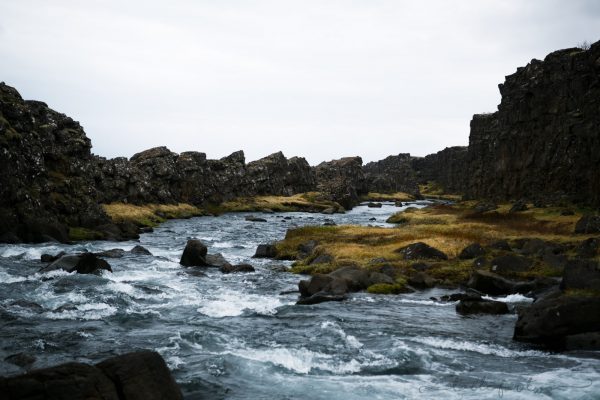 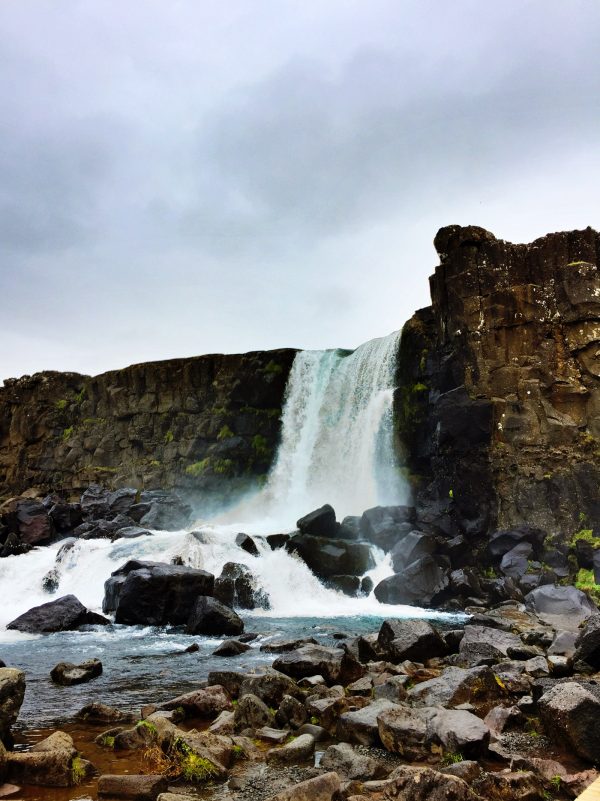 After Þingvellir National Park we continued our drive up to Geysir to see well, the Geysir hot spring! We stopped along the way up to capture some of the views. Isn’t this just crazy what you see on just a drive up somewhere? Iceland is magical. 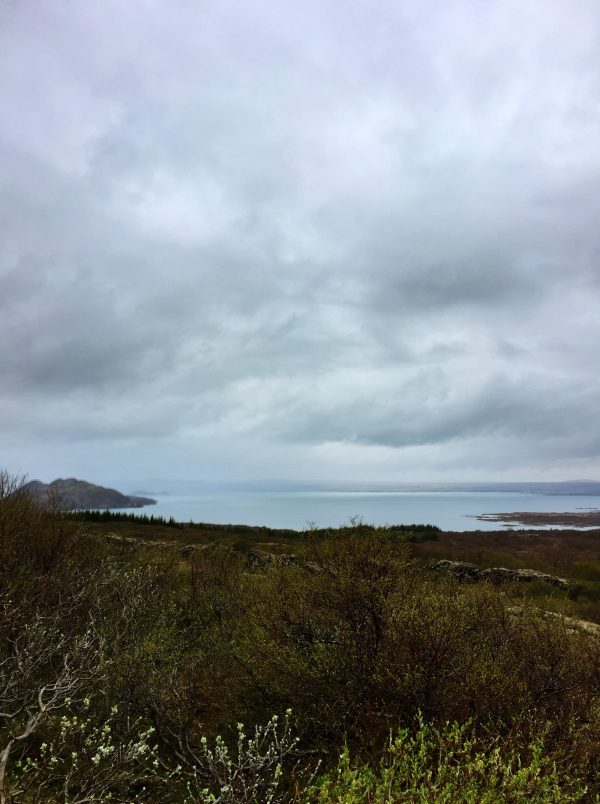 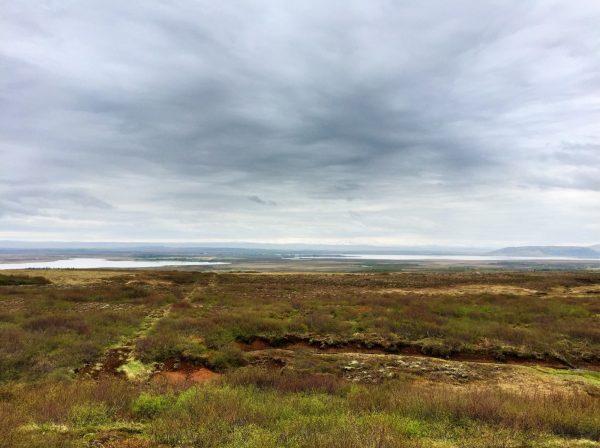 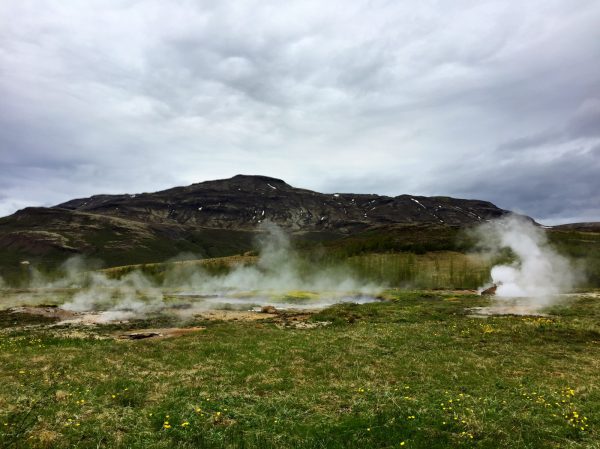 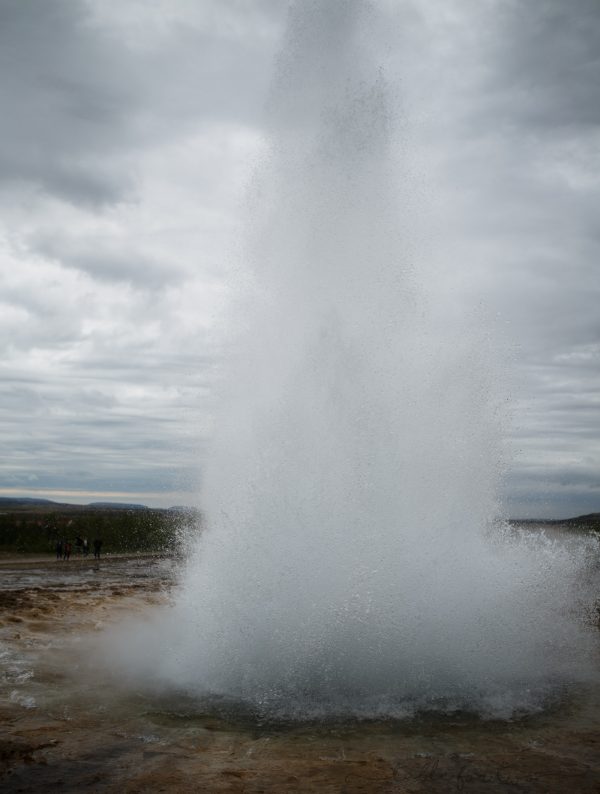 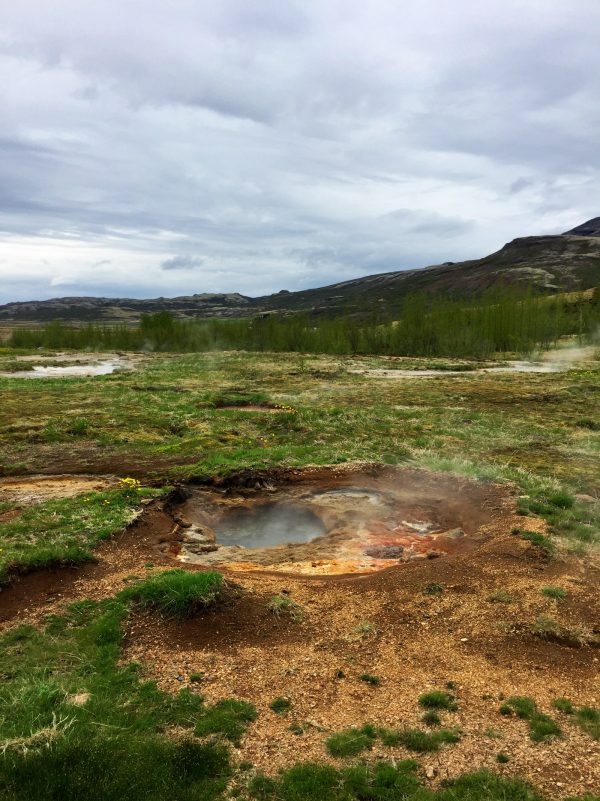 Next up, we headed to Gullfoss Waterfall. It’s a pretty incredible sight. There’s a path that you can walk on that takes you RIGHT next/on top of it. It was freezing the day we went and super windy so we didn’t do that. We would’ve gotten so sick from being wet and cold. I still thought it was beautiful regardless of how close or far we got! 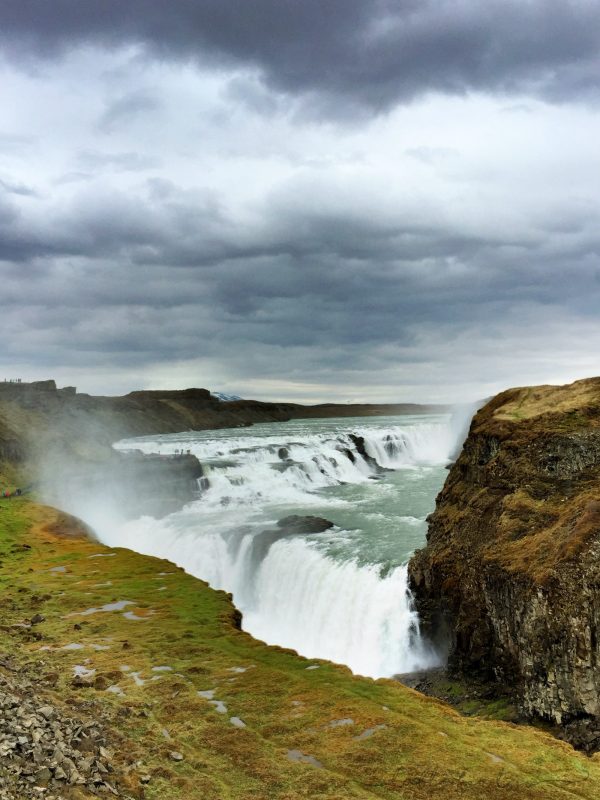 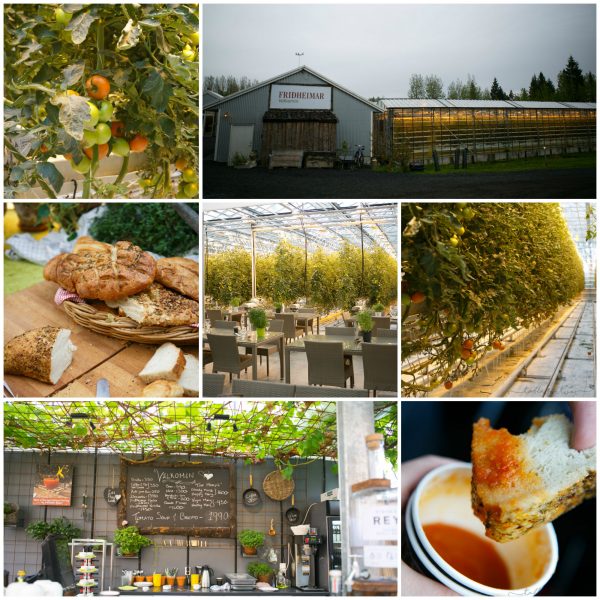 This is a family-owned farm and they harvest their own tomatoes and cucumbers. You can get a tour of the greenhouses and how they cultivate their tomatoes. You actually dine in the greenhouse and each table has a basil plant with shears on it so you can cut your own basil to put in your tomato soup! They have fresh bread that you slice yourself to dip with the tomato soup that you order. We got there RIGHT when they closed and they felt really bad that we couldn’t sit down to eat (kitchen closed) but they offered us tomato soup to go in a cup and as much bread as we wanted.

This was the freshest tomato soup I’ve ever had and it was so glorious to have because of how cold that day was in Iceland.

After we filled up on tomato soup, next up was Kerið. It’s a volcanic crater lake. They recently started charging for this. I think it was 200ISK per person. It’s said that Kerið was likely a cone volcano that erupted and emptied out its magma. Once the magma was depleted, the weight of the cone collapsed and it created this crater.

When we were here, my legs felt like jello. It’s so high up and so deep down. And it was SUUUUPER windy. Oh my goodness. It was ridiculous. I felt like I was going to be blown right into this crater! On a clear sunny day, the blues of the water really pop. If we had come the day after, I would’ve been able to capture that. We, unfortunately, came on a cloudy day. 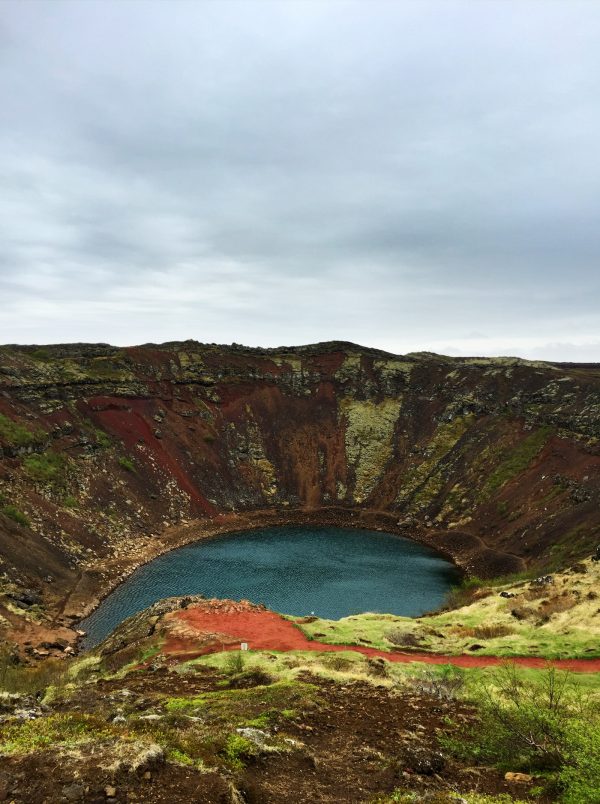 Okay, this is where we drove back to Reykjavik off the beaten path, as mentioned above. All these photos are from the drive. We were the only ones on it and I definitely don’t recommend driving this in the winter. The roads aren’t well-maintained in the winter and we could totally see how you could literally just fall off the cliff. It’s really windy and tight in certain parts. I was getting SO nervous because it was windy and rainy but we were completely fine.

As I mentioned, this road is completely unworldly. One minute you’ll be seeing mountains, the next it’s like a barren field of moss and rocks. 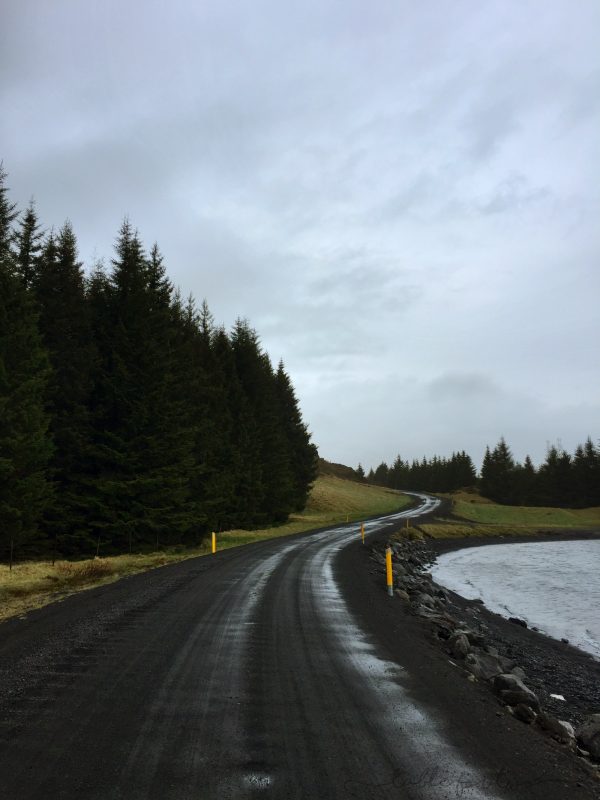 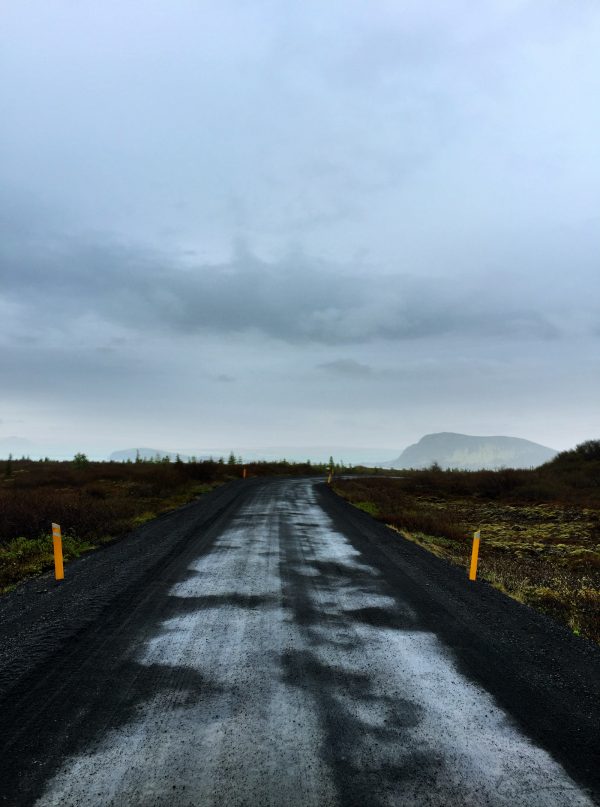 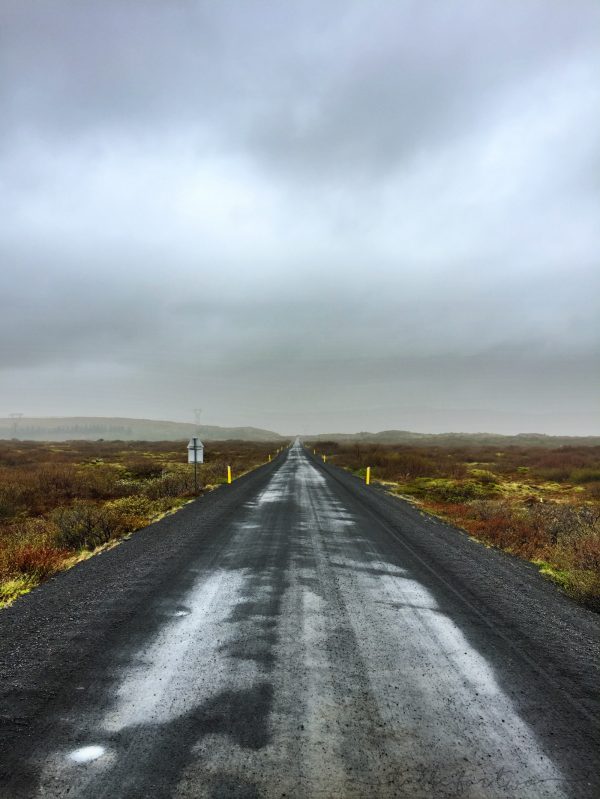 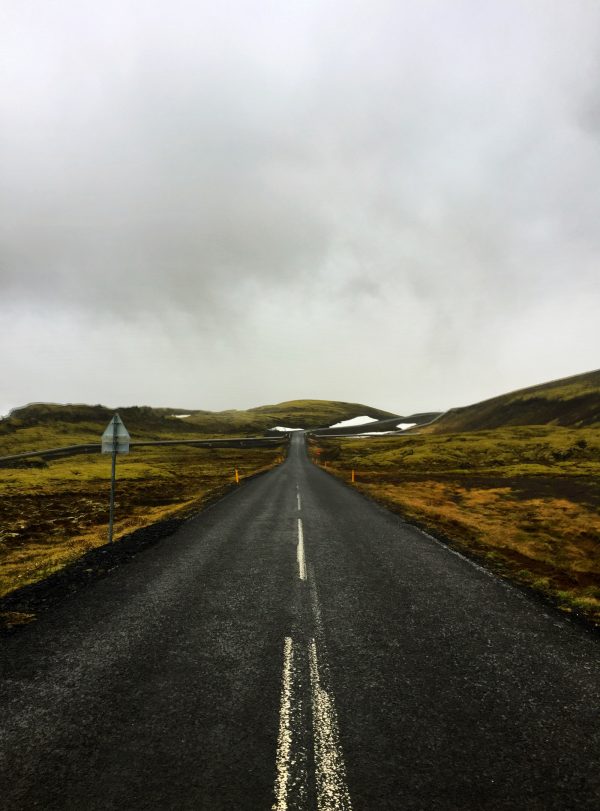 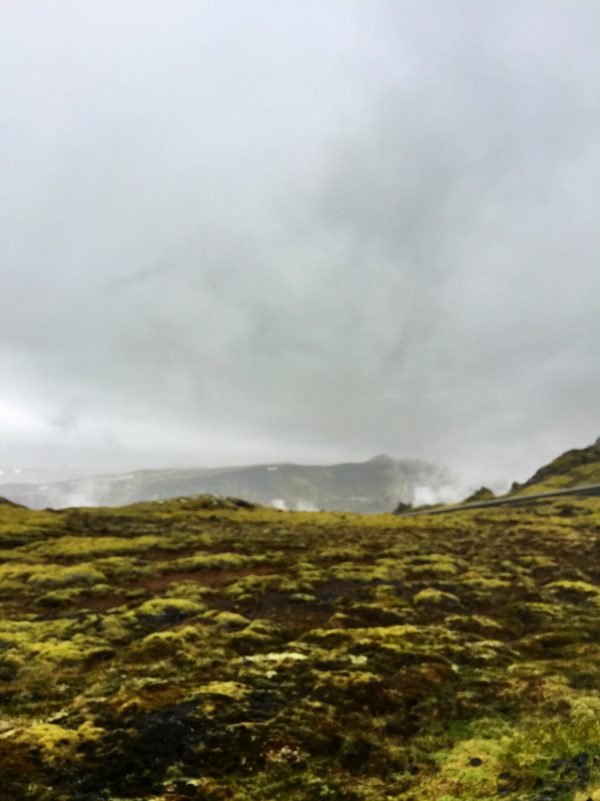 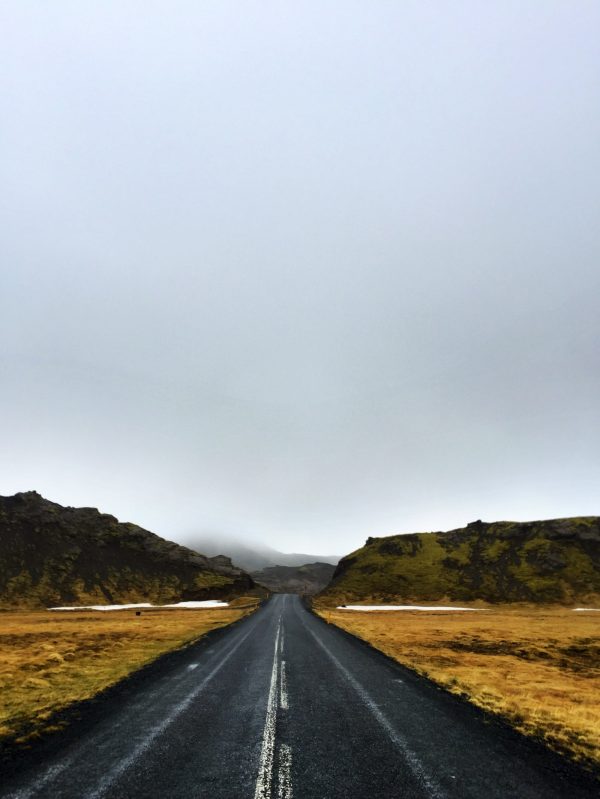 THIS photo below freaks me out. Doesn’t it look like you’re on another planet? It totally looks like something out of a movie. What you would see if your spaceship crashed. 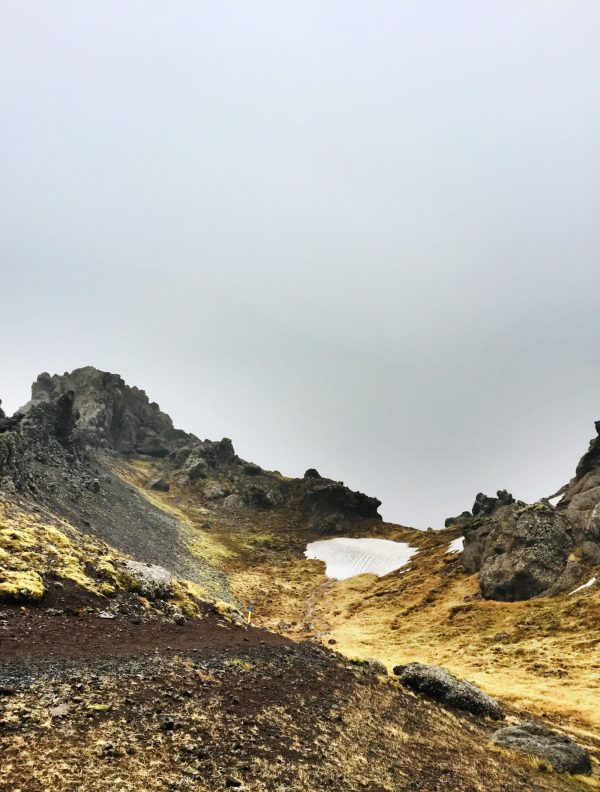 When we got back to Reykjavik, we walked from our studio to Ostabudin. This restaurant was recommended to me by a Snapchat friend who lives in Iceland. It was one of the best meals we had in Iceland and I highly recommend you going if you’re ever in downtown Reykjavik!! It’s a teeny tiny place so I would definitely make reservations. We showed up at 8pm on a Tuesday and they were packed, but we only had to wait 10 minutes for a table. I’m sure if it were closer to the weekend, it would’ve been far longer. 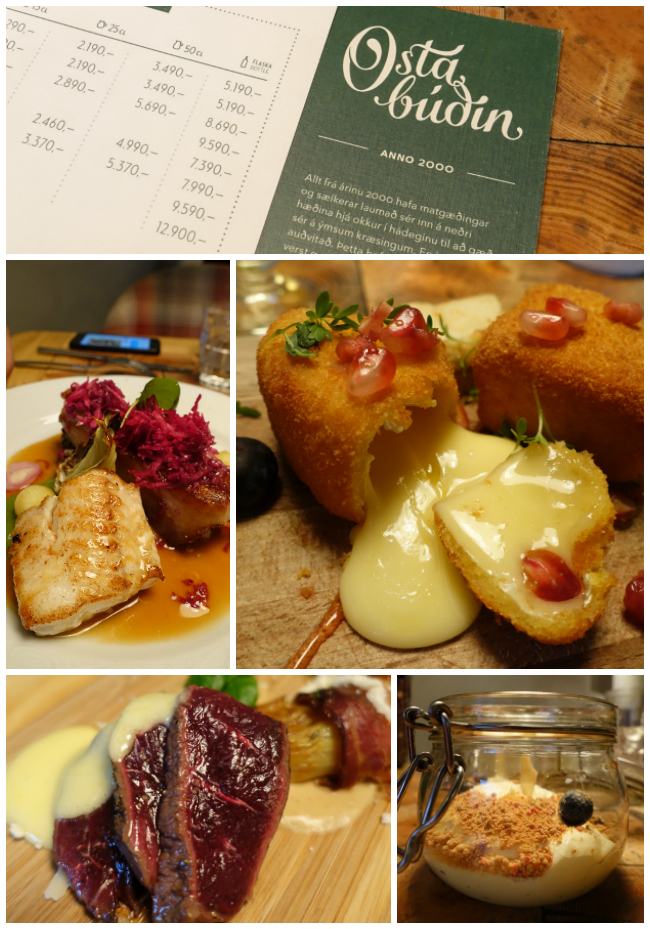 We ordered fried camembert cheese (OMG THIS WAS RIDICULOUSLY GOOD), whale, salted cod, ocean catfish & pork belly, and we each ordered Skyr mousse. We didn’t have a bad bite at this place. The salted cod was the best cod I’ve ever tasted and the pork belly, we both agreed, was the best pork belly we’ve ever had. The Skyr mousse was so good too. I loved that it was dessert. It didn’t feel as heavy as typical American desserts. 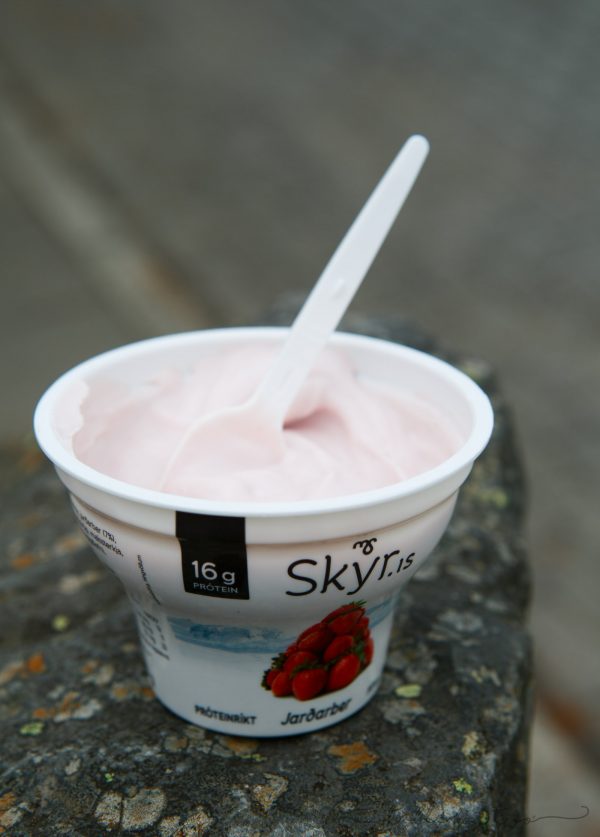 One thing I’m going to insist that you try in Iceland is their Skyr. Yes, you’ve probably had Siggi’s in the states and I’m going to say Siggi’s is NOTHING compared to the real Icelandic Skyr. I don’t care how they market it to be “authentic” Icelandic Skyr because it’s not. I had Siggi’s once in the states and couldn’t finish it because it tasted so bad. I was skeptical about trying Icelandic Skyr when we got to Iceland because of my bad impression from Siggi’s. They always say you have to try something where it’s originated so I gave it a shot. Um, best thing ever. We had Skyr every morning and it’s the creamiest and perfectly thick yogurt ever. I feel like Siggi’s is only popular because they’re good at marketing. #mytwocents

I have visited there with my friends. It is a very beautiful place. I really love this place. I am also planning again to go there in this upcoming winters. I will visit the golden circle tour this time which I missed it on my last visit.

Love your pictures and explanations about your trip! We are planning a last minute trip for mid to late July. Which shoes do you recommend and how cold does it really get? We are from Los Angeles so we are whimpers. Any suggestion will be so helpful;) thanks!

I recommend hiking shoes since you do a bunch of walking and sometimes the ground isn't super stable b/c of the gravel so hiking shoes have higher side support for your ankles so you won't easily sprain it as it supports the sides more. Haha, if you're from LA, I would say bring layers for sure. It gets cold and windy :) it's like 50's to 70's but definitely on the lower end of that! Have so much fun!!!

I love reading about your vacations! Also, I am not sure if it is just me but there is a tool bar on the right side of the page that blocks the words on the page. It has a Pinterest, Yum, twitter, FB, google +, etc toggles. I have to scroll down and read from the bottle of the page to see anything! Just thought you may want to know!

Wait, now its fixed now! its on the top

so enjoyed your tour. we are going to iceland in late july. we are mostly doing southern part with a tour group, however, will have 2 days in Reykjavik by ourselves. will definitely make a reservation at the ostabudin restaurant and have skyr. can you recommend things to do and see in Reykjavik?

Here is a post all on Reykjavik: https://www.tablefortwoblog.com/iceland-in-5-days-reykjavik/ - enjoy your time in Iceland!

You ate whale??! I didn't think people did that. Just making sure that wasn't a typo....