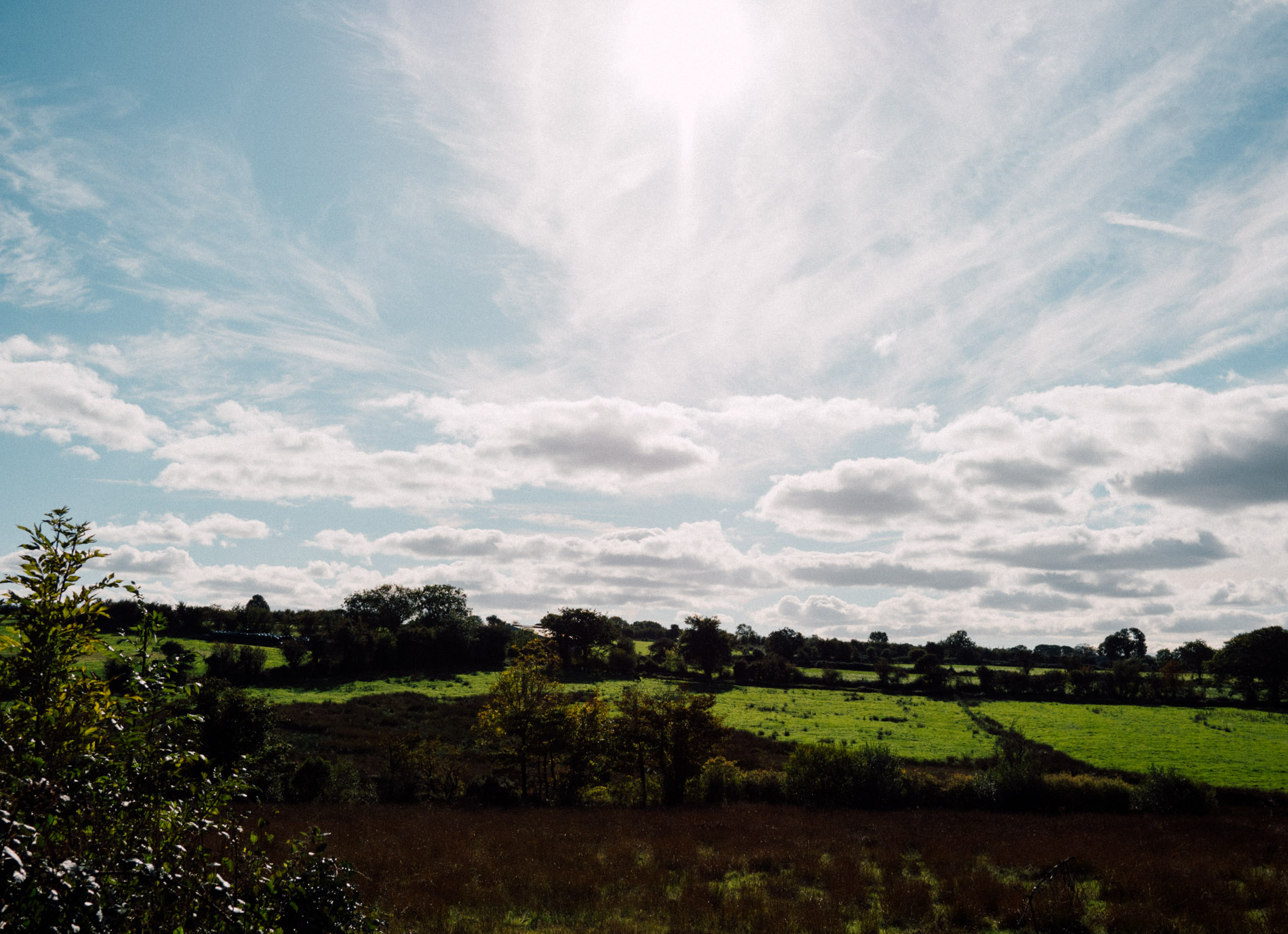 Our next stop was a long roadtrip down to Kenmare, Ireland. It’s about a five hour drive from Connemara to Kenmare.

Let me preface this by saying that when I was planning this trip, I tried to make certain cities “bases” for a few days so we weren’t always driving or packing up.

If I were to do this trip over again (and just knowing what we know now), I would’ve made Killarney our base and not Kenmare; just because it was so far south and not a super interesting town.

However, making Kenmare our base, we got to see Beara Peninsula whereas if we stayed in Killarney, I don’t think we would’ve been able to see that.

This basically goes to say that there is so much to do in Ireland and you can’t really do it all in one trip unless you stay for like 3-4 weeks. And even then, I feel like there’d still be so much more.

Since we were going to pass Galway anyway, we decided to stop there for a couple hours to walk around the city and grab lunch. 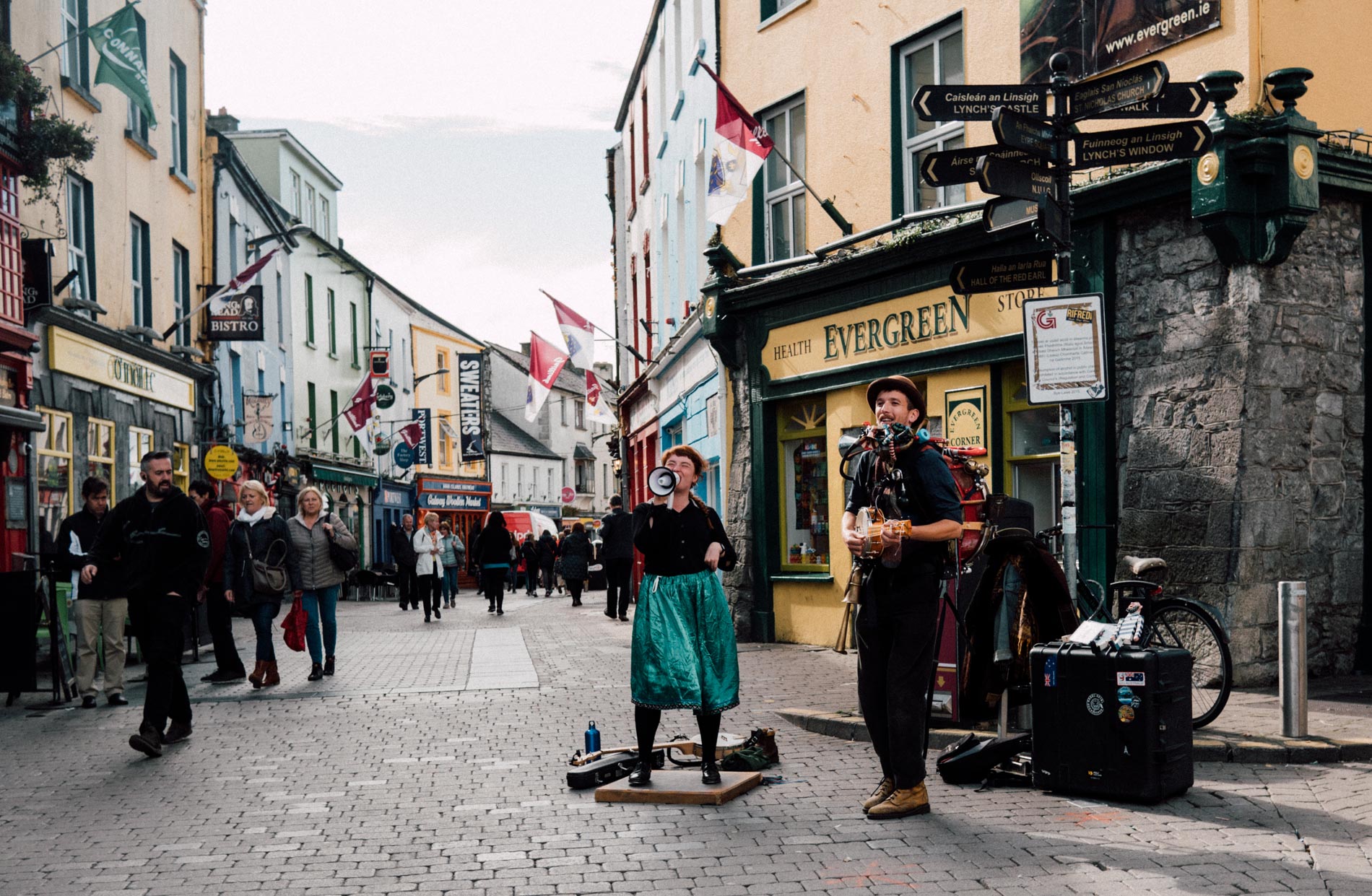 Loved strolling the street and listening to live Irish music. They were so talented and it was such a delight watching them! 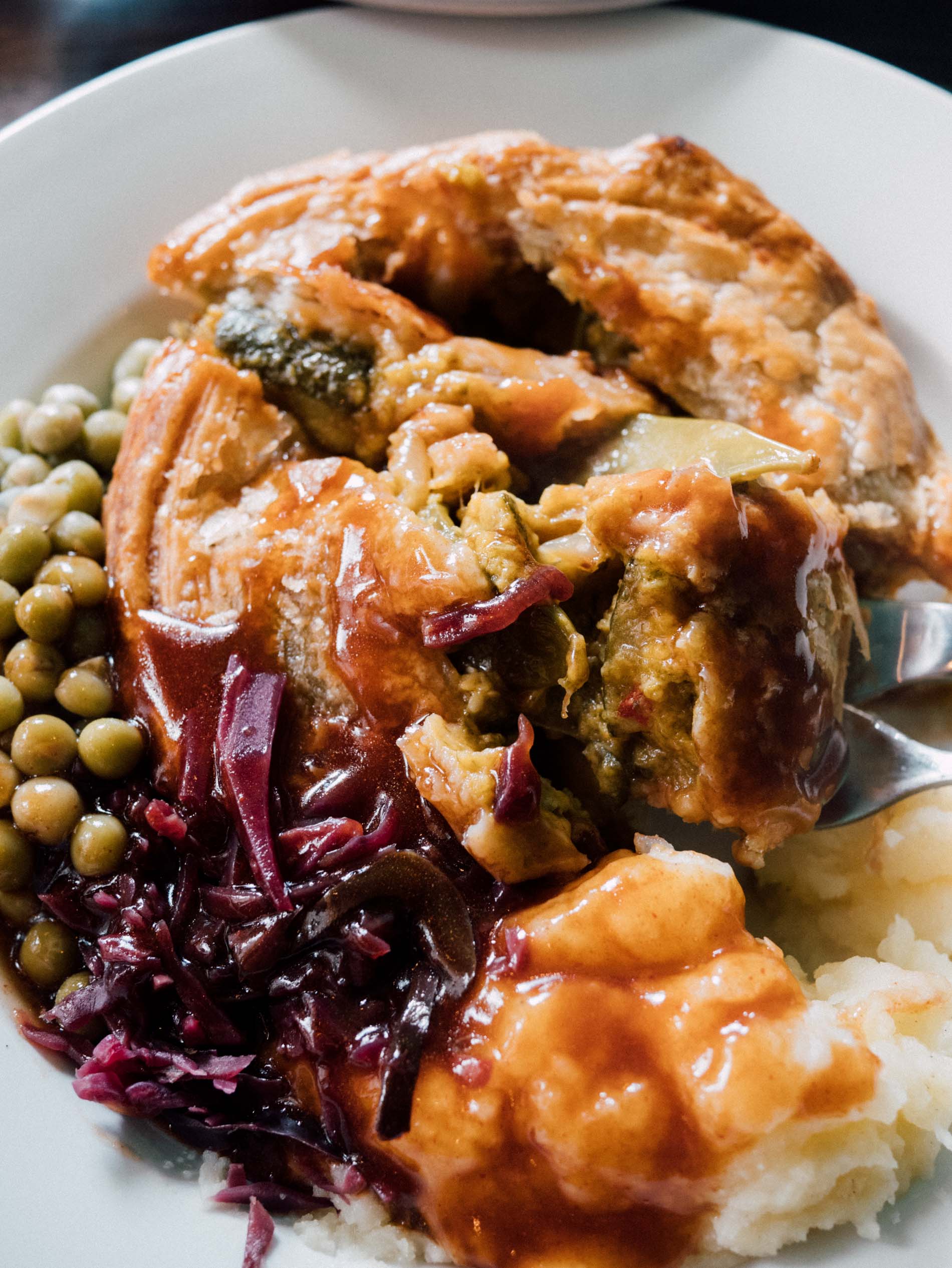 Numerous people told us that The Pie Maker was a definite must in Galway so we decided to have lunch there.

I loved the crispy, tender crust but the filling was incredible!

I got one of their seasonal specials that had a bunch of root vegetables and Jason got their traditional Guinness beef stew pie. 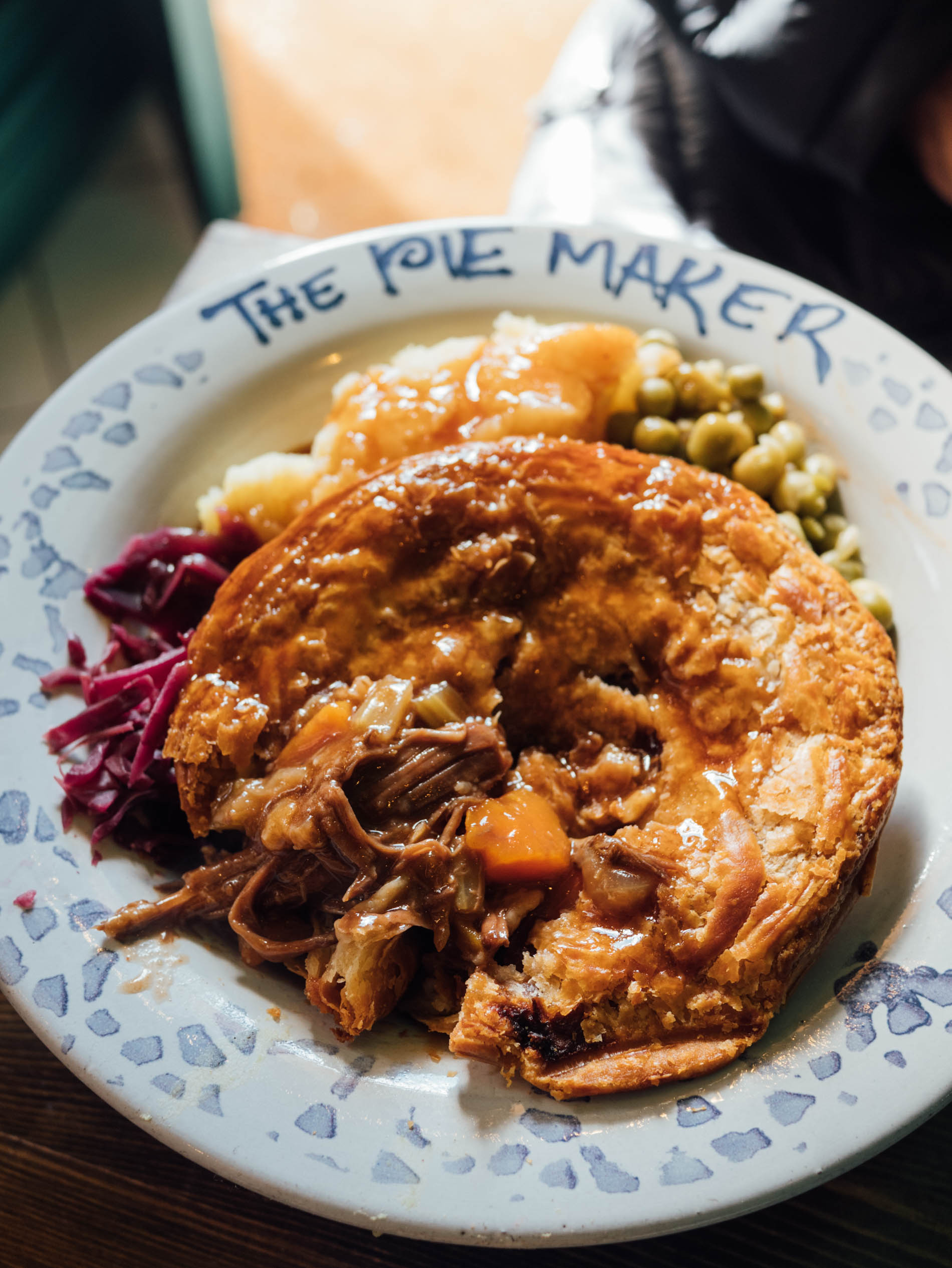 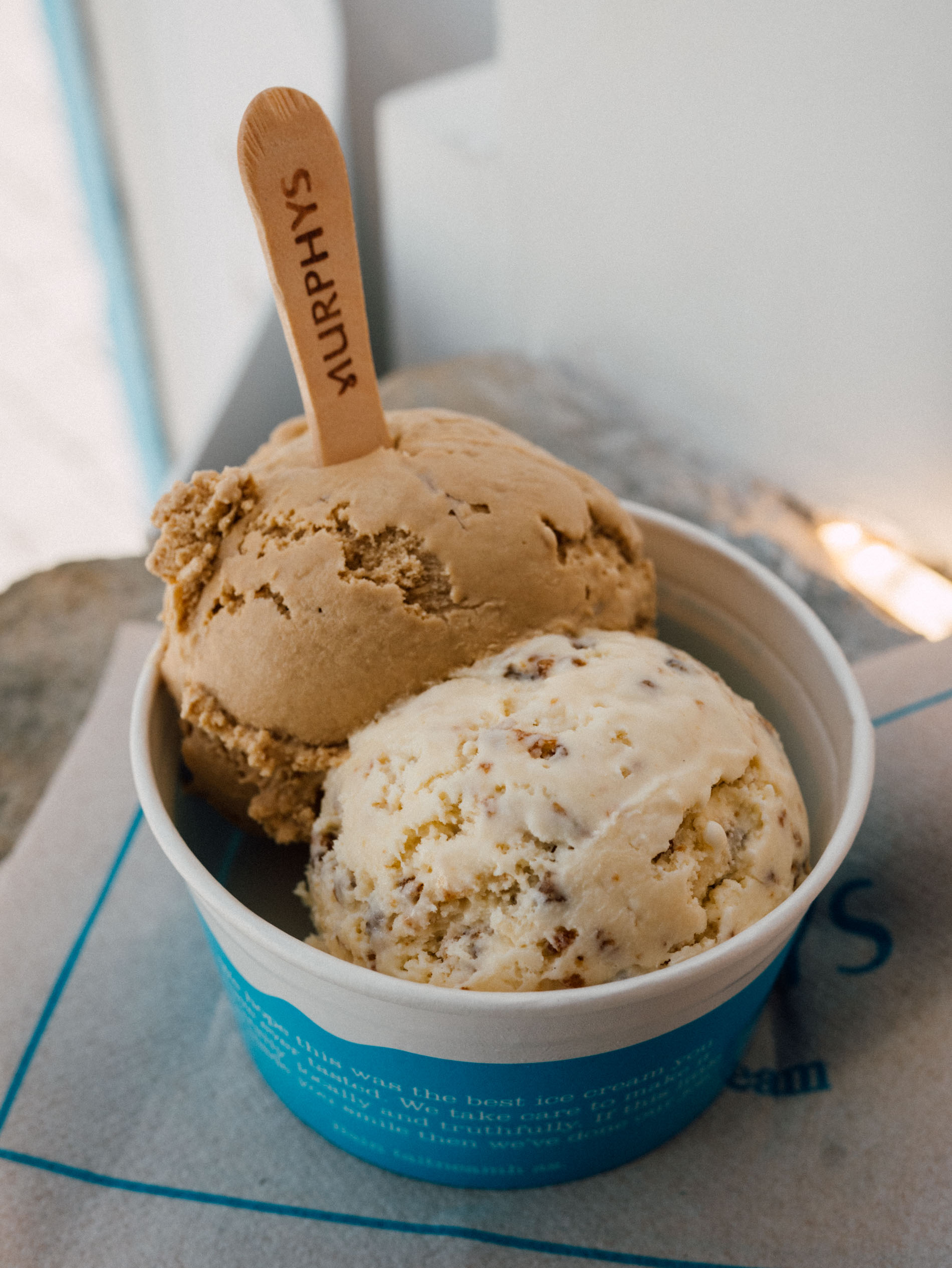 Everyone raves about Murphy’s and I can see why! They had some of the most unique ice cream flavors.

I got the caramelized crunchy brown bread and Irish coffee. Their most popular flavor is the sea salt.

They allow you to try all the flavors and the sea salt was definitely one that was on the top of my list but you know I can’t turn away Irish coffee and I loved the crunchy texture of the brown bread throughout. 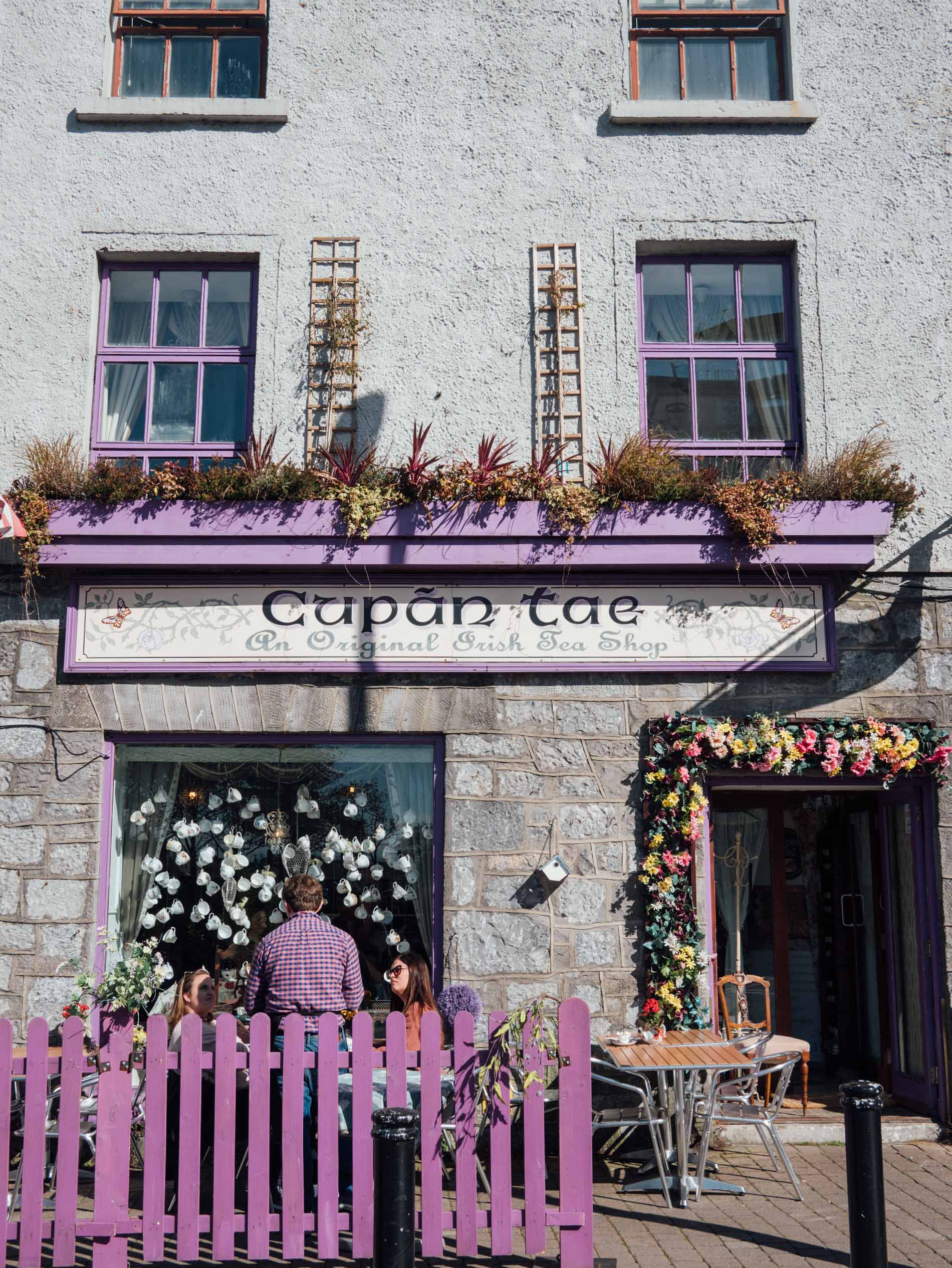 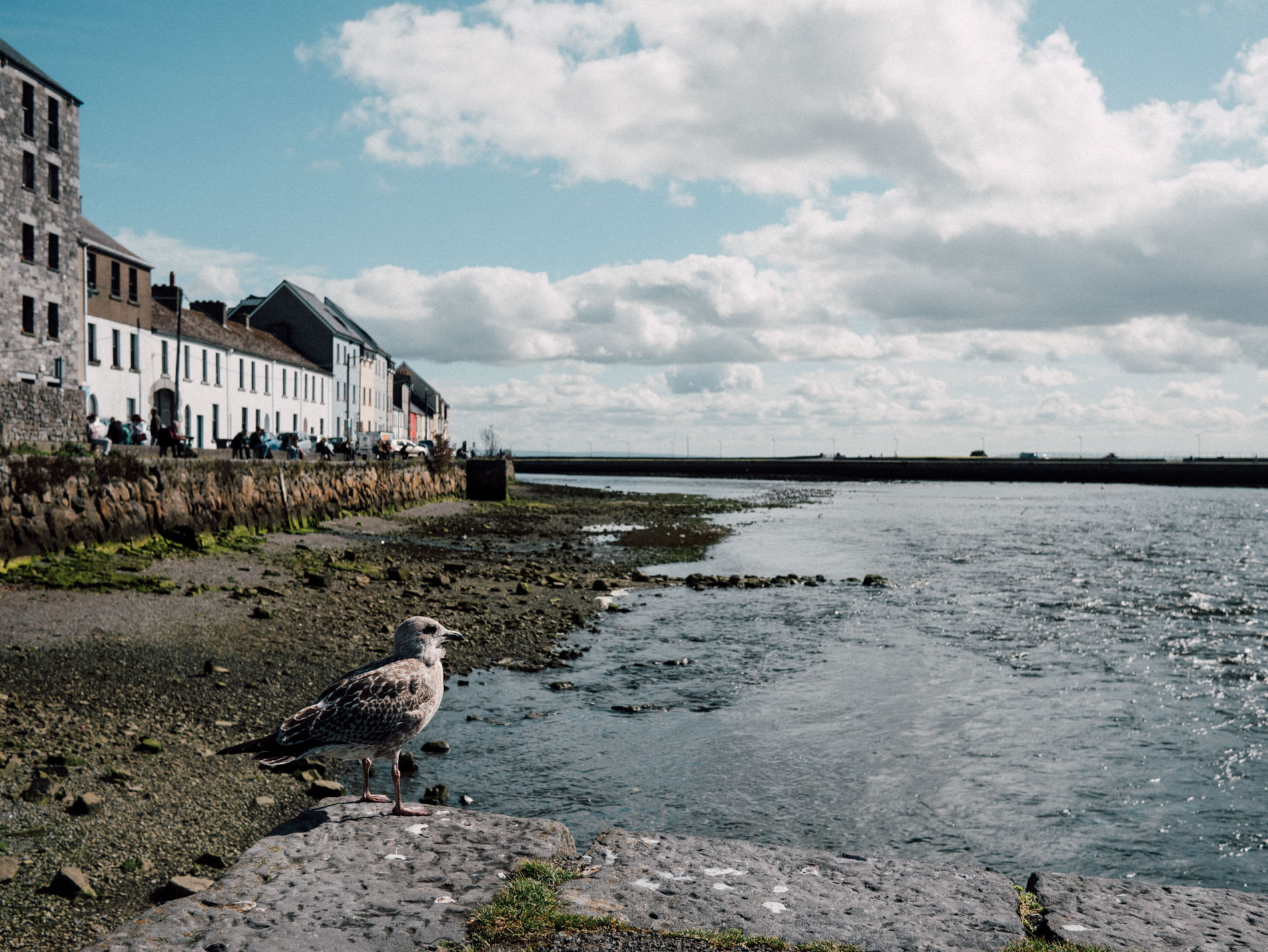 Once our bellies were full, we were ready to hit the road! Off to Kenmare!

The drive there was incredibly scenic. We were driving through the countryside and on local roads so we were literally going between different farms and farmer’s land.

It was weird the way Google took us; to cut off an angle, we had to take local roads which made sense but for a while, we were truly wondering if we were lost.

It was really neat to drive through the local roads though; it was so green and lush. You could tell the locals were confused to see our car; all the towns we drove through, it was one where everyone knew each other and knew each other by their cars so when they saw ours, they knew we were tourists, haha 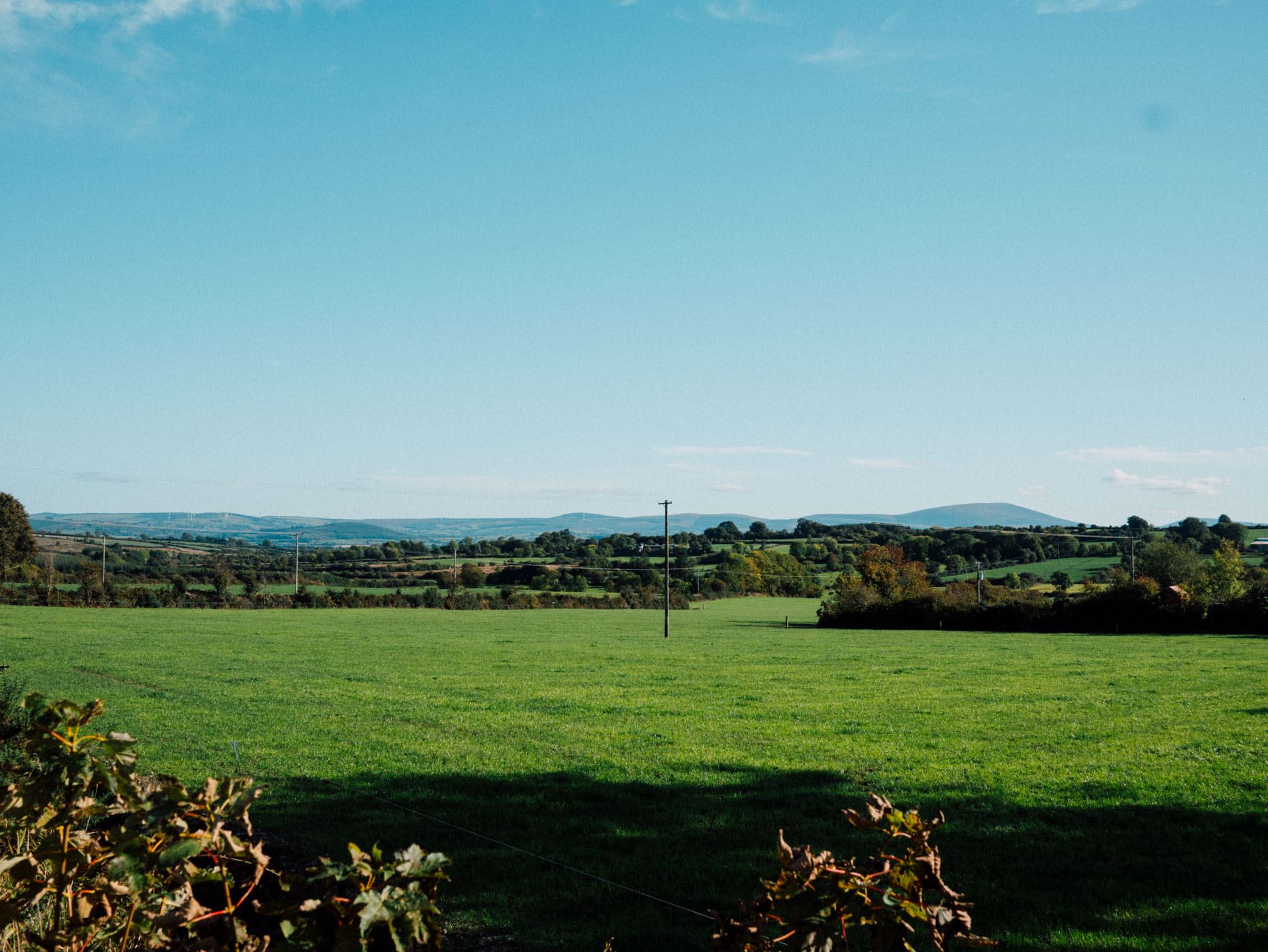 What seemed like more ages, we finally made it to our hotel. We stayed at Sheen Falls Lodge.

It was a beautiful hotel but if we were to do it again, we wouldn’t stay here. It’s too Americanized and we would have preferred somewhere with a more Irish feel.

We felt like we were back in America by staying here; which is not a huge deal but when you have 70 year olds watching FOX News on their iPad at breakfast and talking about how great the American President is…it was not something you wanted on vacation. 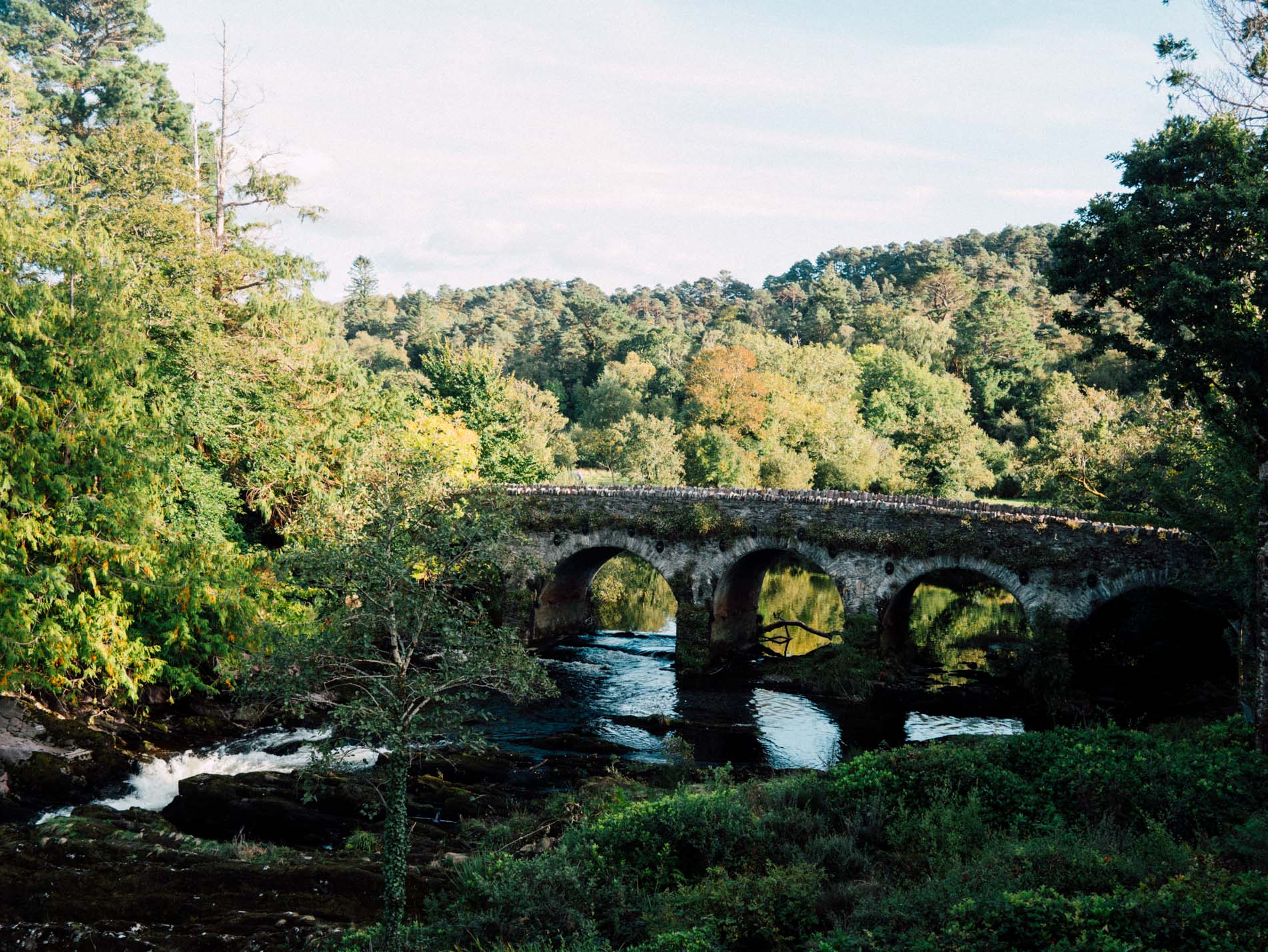 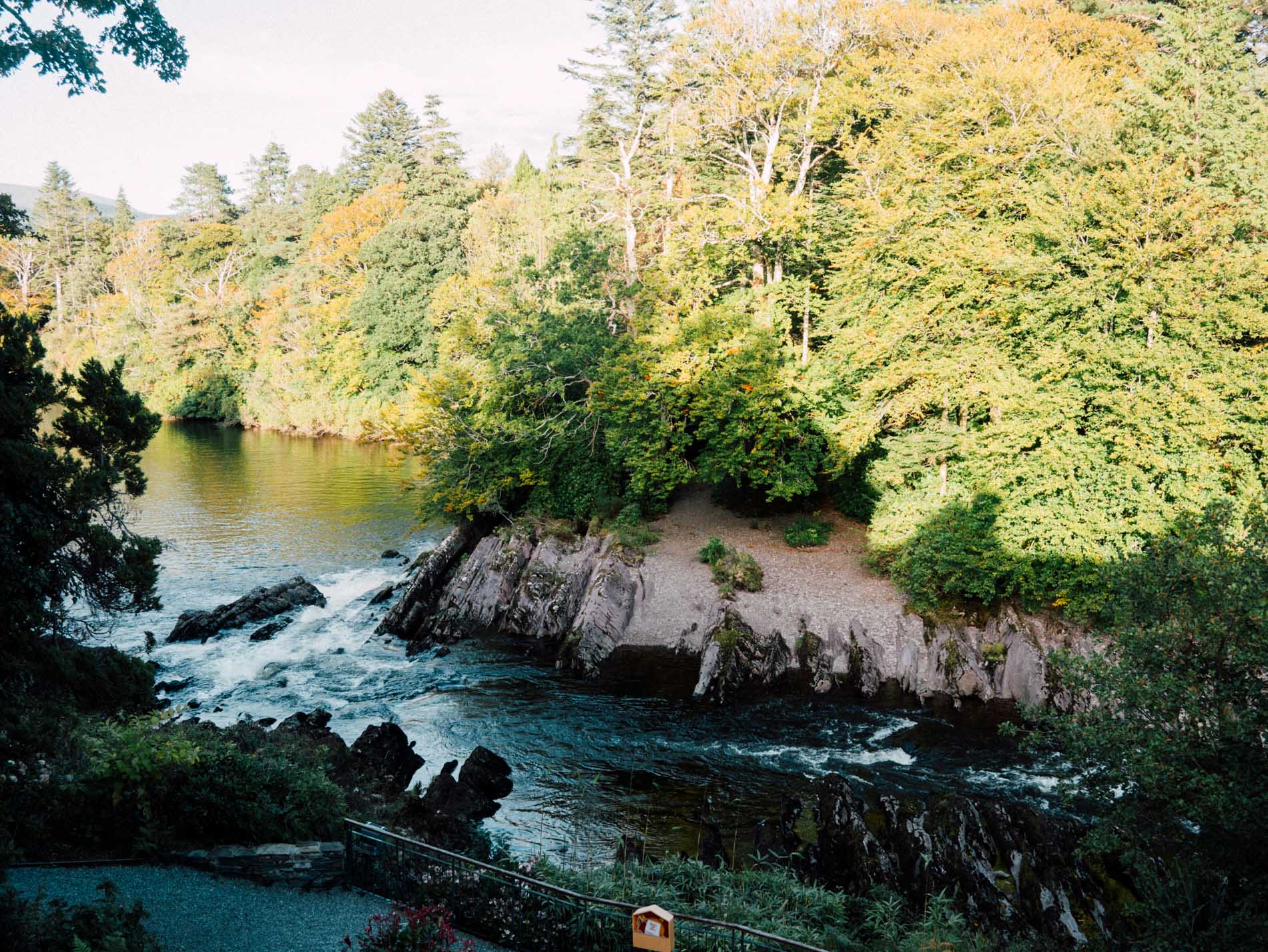 However, with that said, this was the view from our hotel room.

Sheen Falls Lodge sits on, well, Sheen Falls, lol so the view was beautiful and being able to hear the water at night was really relaxing. 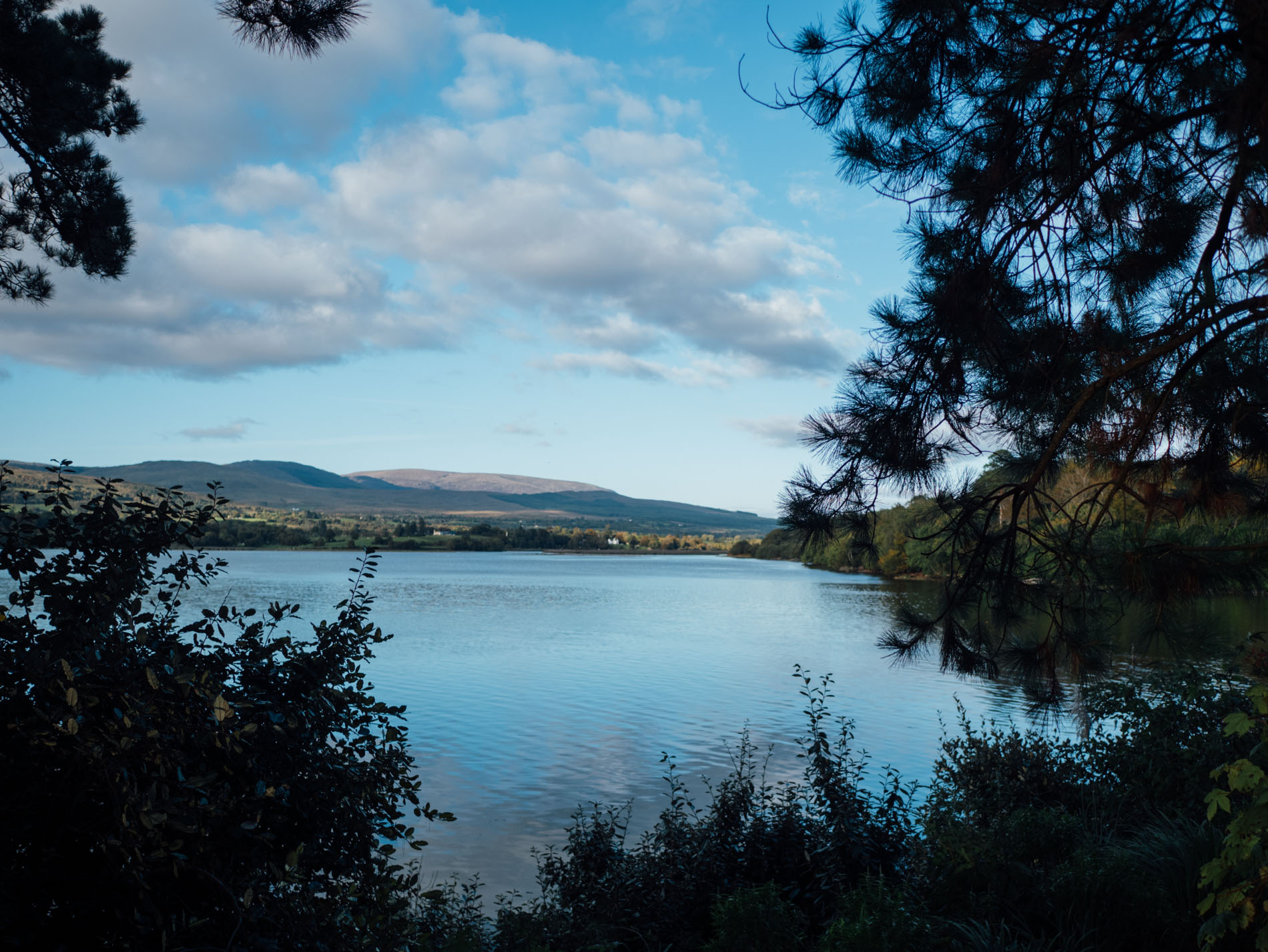 The hotel sits on this river, which is super pretty and scenic. You are pretty isolated though but it isn’t a far drive into the downtown area. In fact, it was literally like 5 minutes. The bridge to go into downtown Kenmare was right up the street. 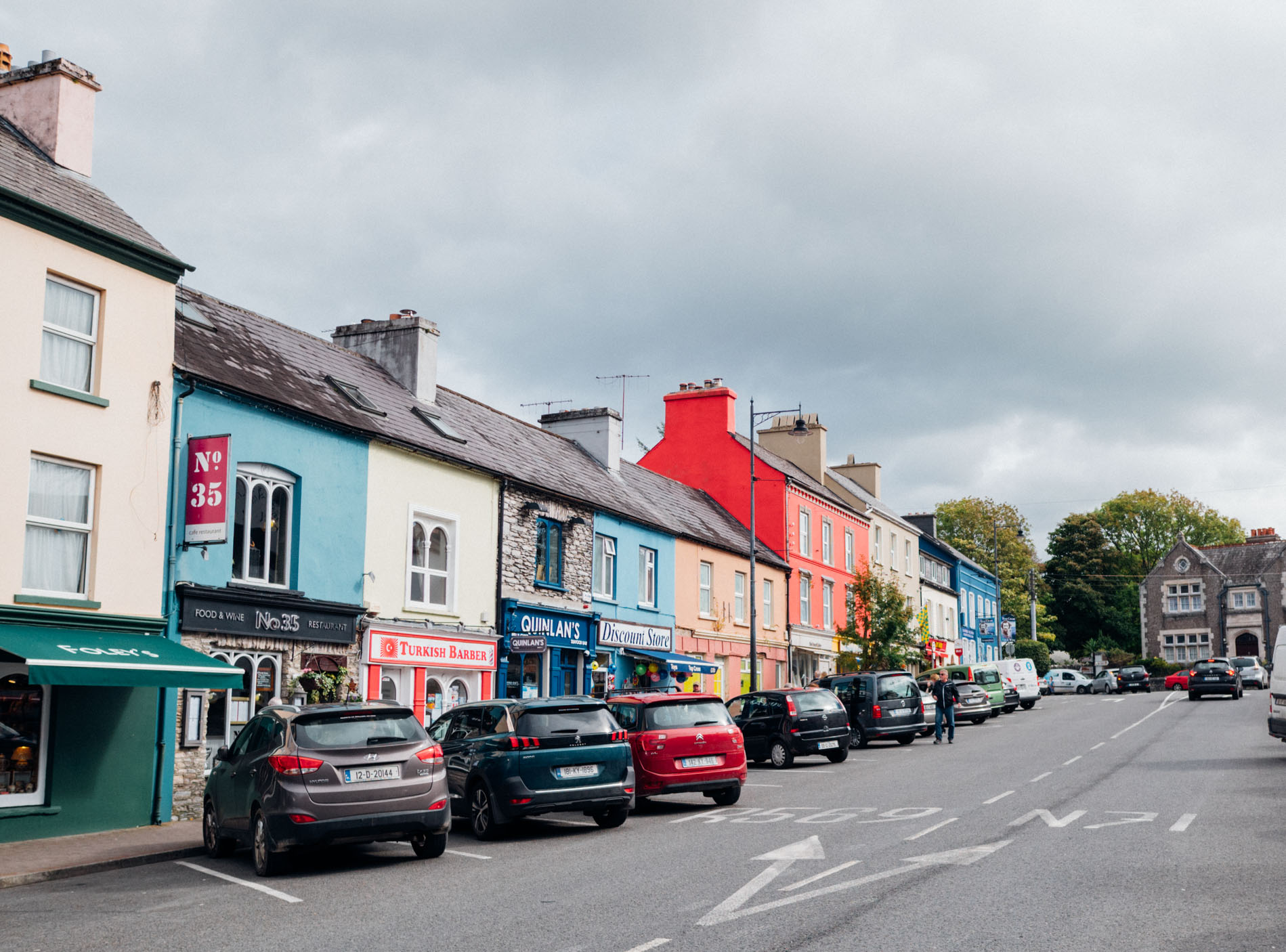 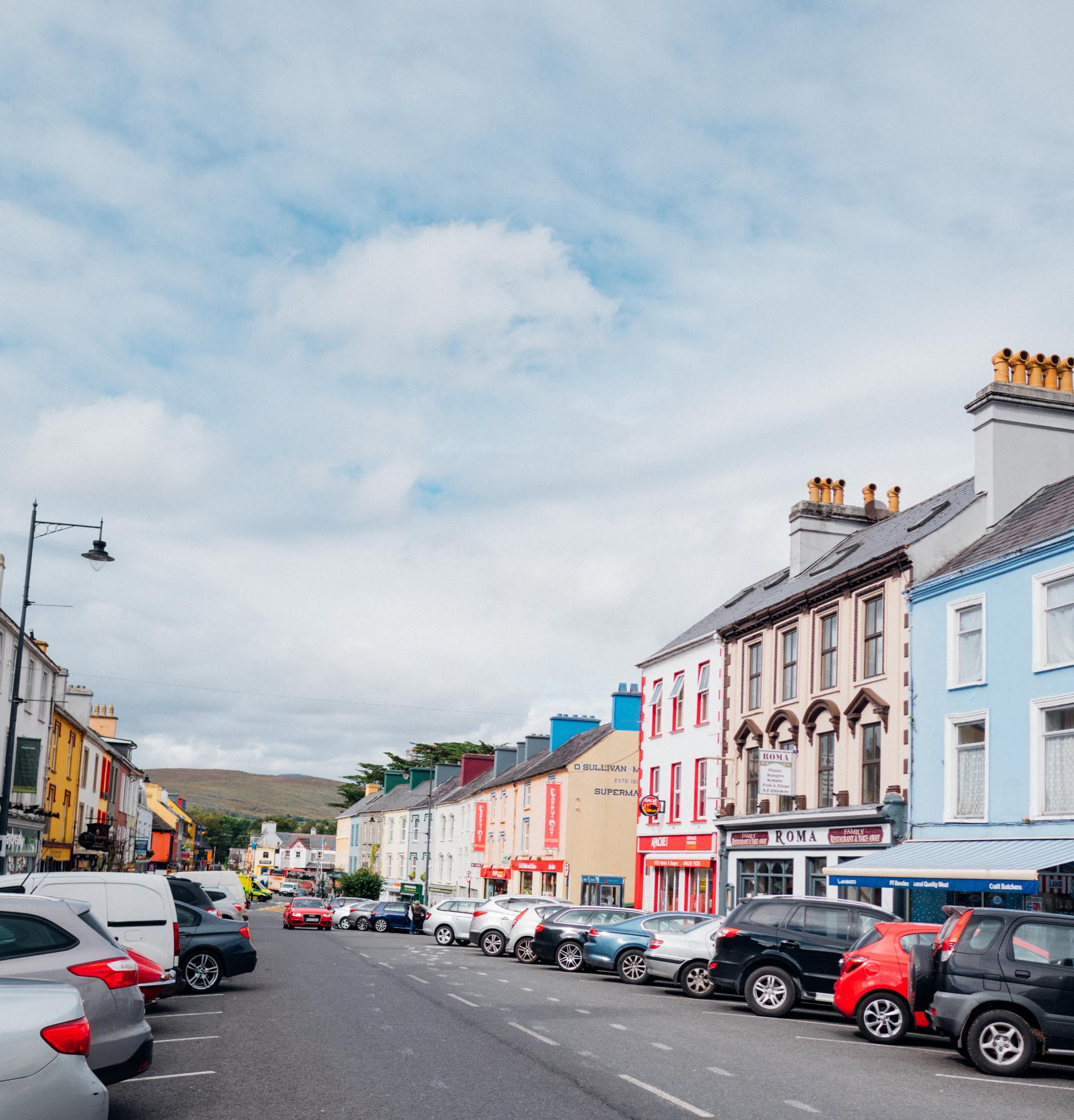 Where we ate in Kenmare

So like I mentioned above, there’s not a lot to do in Kenmare. We used it as a base to do other things.

We went to Killarney National Park and drove the Beara Peninsula and Healy Pass in the days to come so I will definitely have posts on that but I wanted to share with you what we ate in Kenmare because the food options weren’t too shabby! 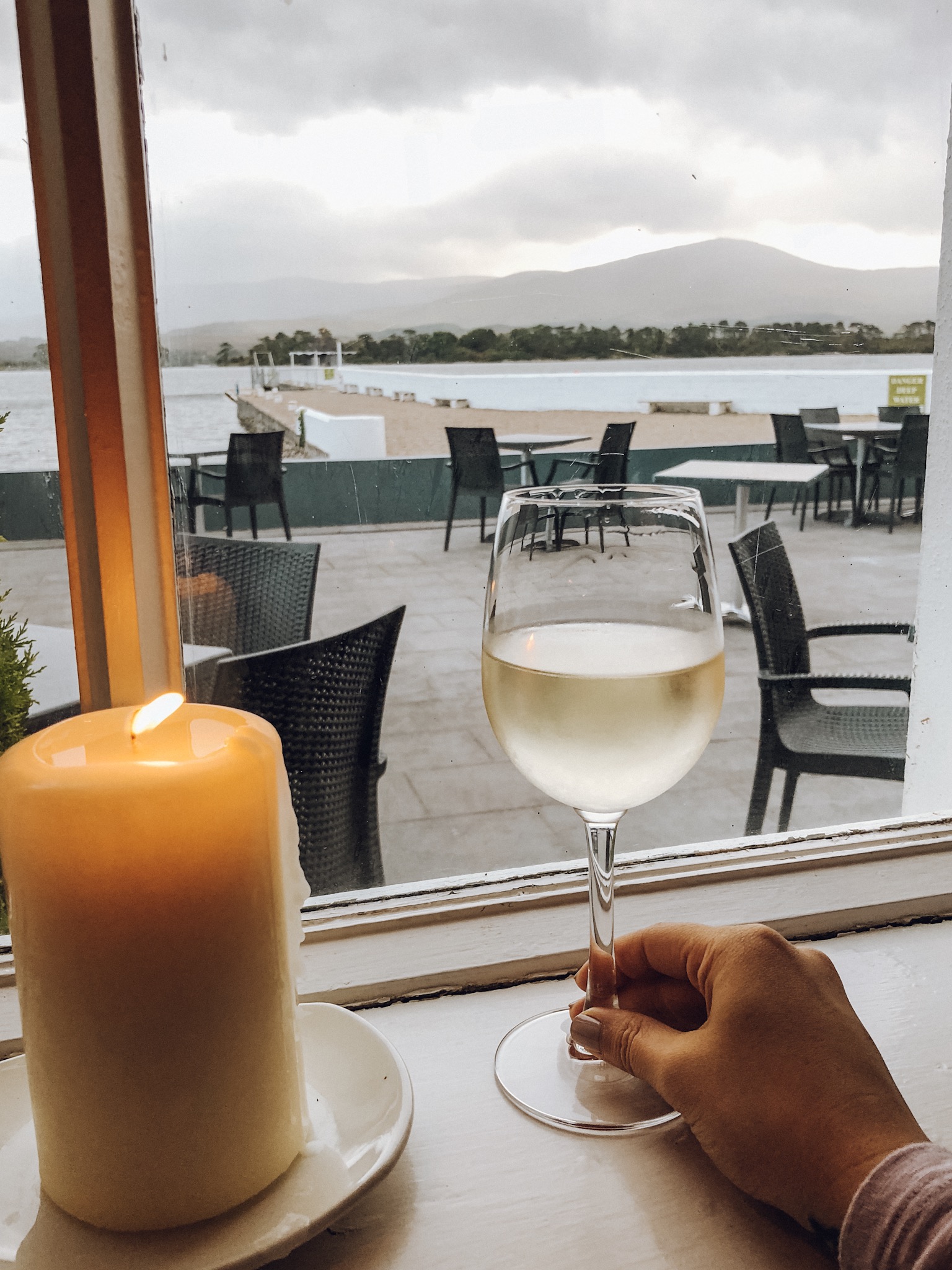 We drove a bit from our hotel one night to go to Boathouse Bistro. Partly because one of the places we wanted to eat at was closed (they didn’t have enough fresh fish caught that day; more on that below) and then all the other places needed reservations.

Oh! That’s one thing that was so interesting about Ireland. You pretty much need reservations everywhere. It was hard to do walk-ins. Or at least that was our experience.

Anyway, we called Boathouse Bistro and they weren’t busy so they said to come on over. They had pretty decent reviews online so we had nothing to lose.

I’m happy to report dinner was great! We even considered going back the next day. 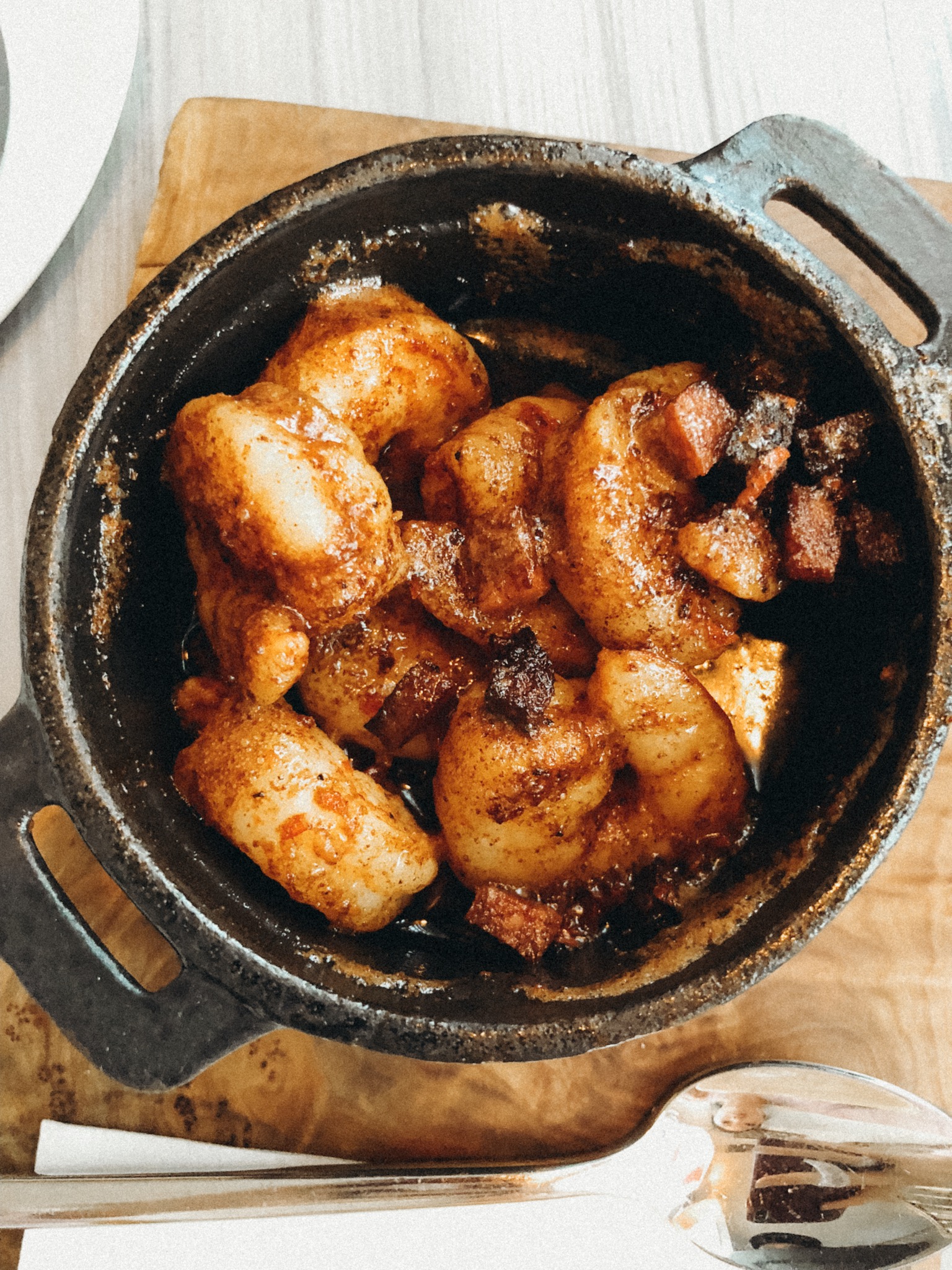 Omg this tiger prawn appetizer was soooo good. It was like in a spicy chili oil sauce with chorizo. 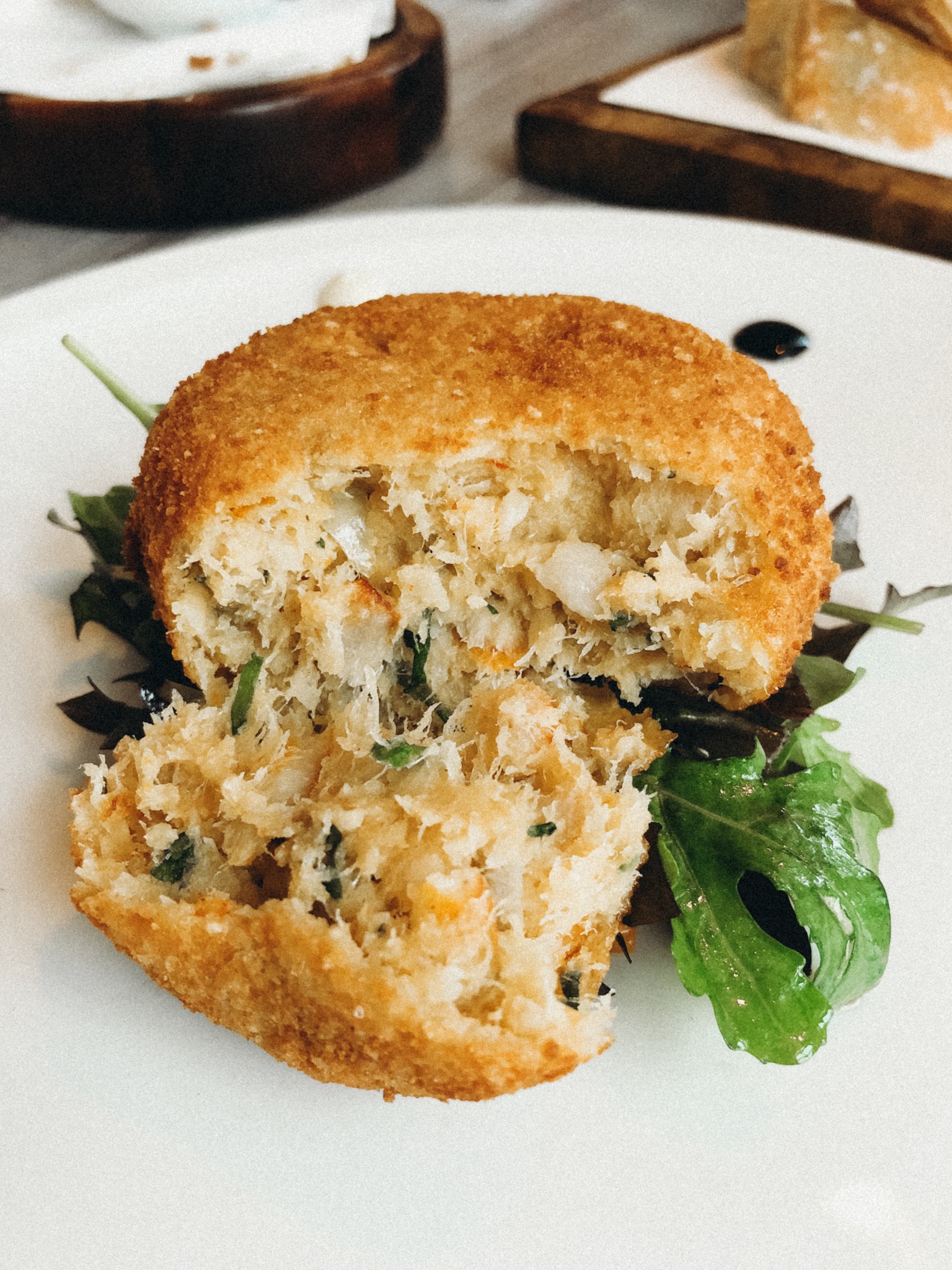 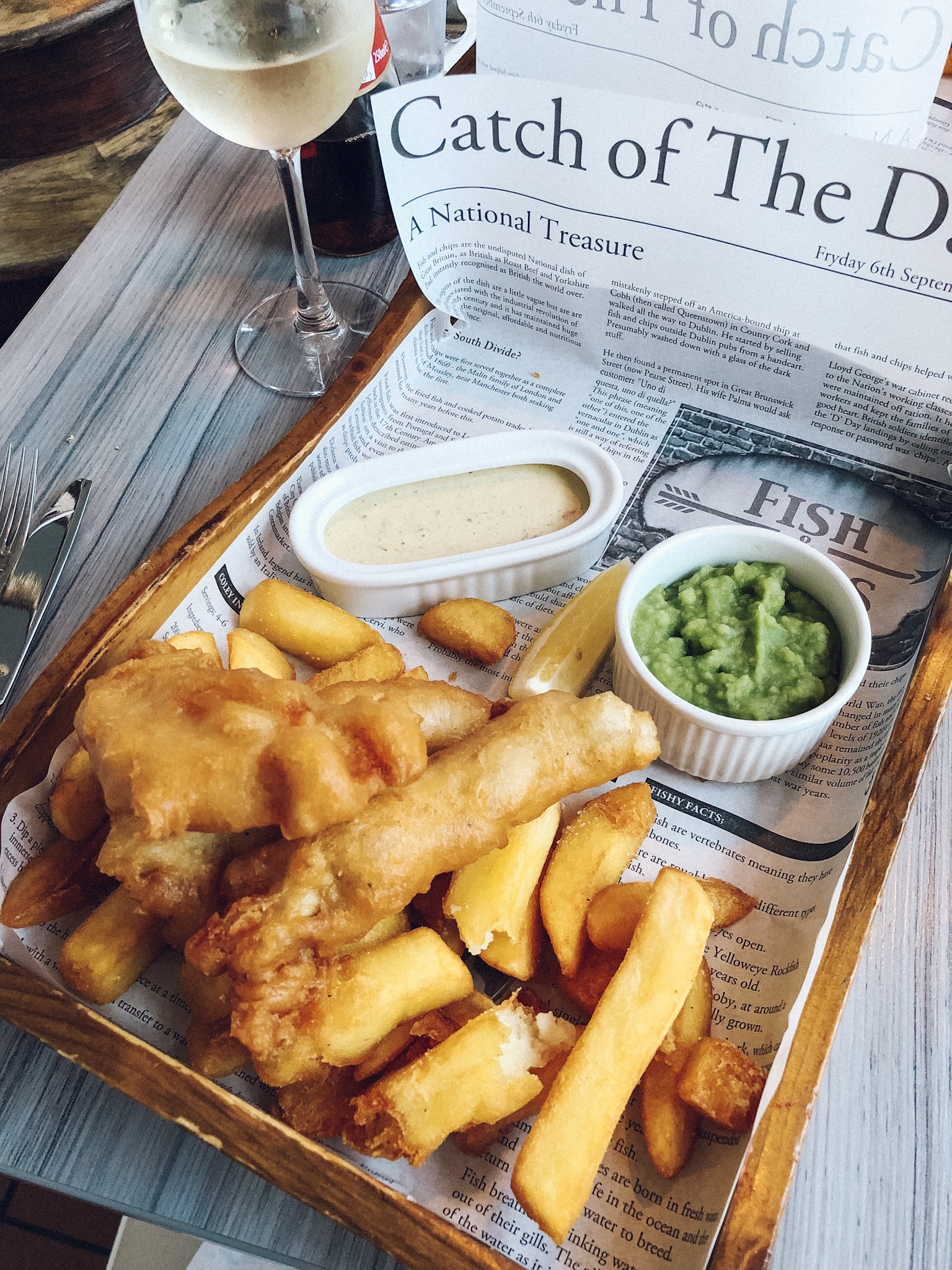 Many people said the fish and chips were great so we decided to try it. It was pretty good but I think it would’ve been more authentic had it been one big piece of fish.

I mean, all in all, Boathouse Bistro was definitely a place we’d return to. 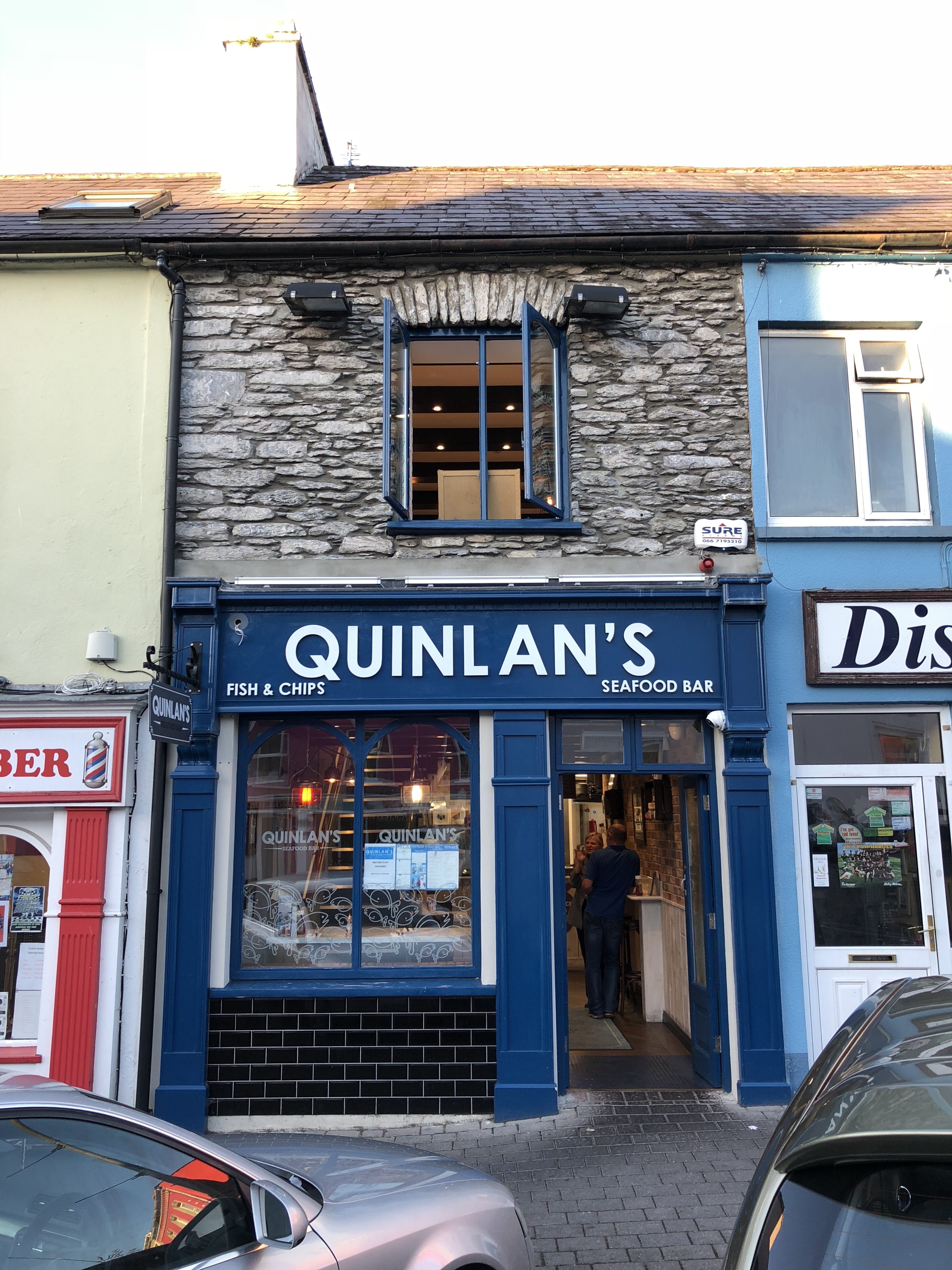 Drop everything you’re doing and head to one of Quinlan’s location in Ireland. They have them all over Ireland.

This is the freshest fish you’ll ever have. Their motto is, “from the ocean to your plate” and it’s so true.

They go out every morning for a catch and what they catch is what you have for dinner. They use their own boats, too!

We even met one half of the Quinlan’s chain, Finlan Quinlan, one of the brothers that started the restaurant and seafood bar.

So, earlier on I mentioned that one of the places we wanted to eat at was closed. It was Quinlan’s.

Their hours are posted on the front door and we were there during a day and time that they should’ve been open but they weren’t. The very next day we went again and they were open and that’s when we met Finlan and he told us that the storm the previous week had made it really hard to go out and catch fish so they had a shortage. 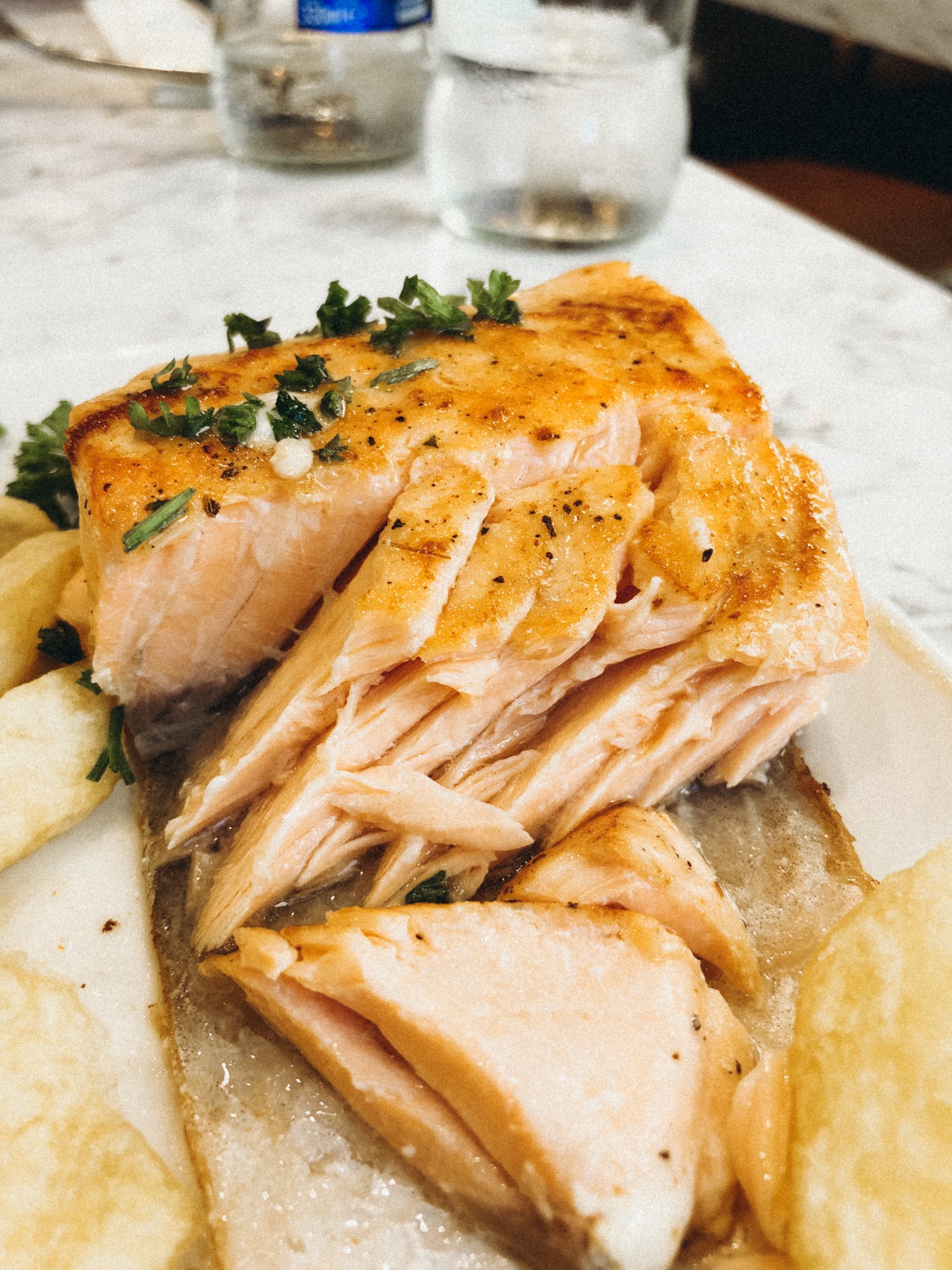 So worth checking out. This salmon was cooked to perfection and you could just taste the freshness.

Ugh, there was nothing like it. I am still dreaming about this piece of salmon.

Well that’s it for Kenmare! Stay tuned for next week as we head to Killarney National Park!

If you missed last week’s Connemara post, you can read it here! 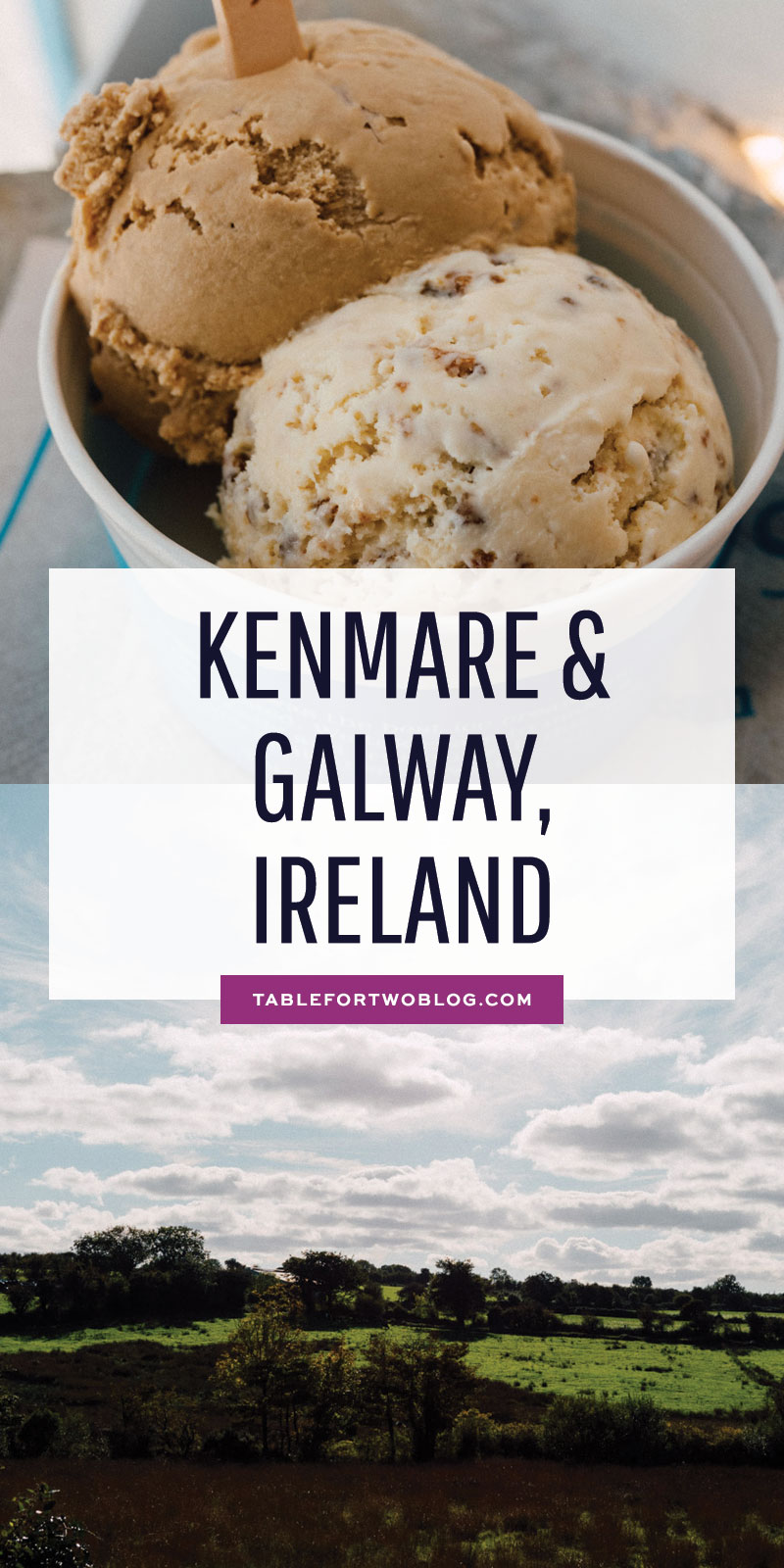