You’re probably questioning my intelligence right now, aren’t you? That or you’re wondering if I posted the wrong pictures for the recipe. In that case, no. This really is it! 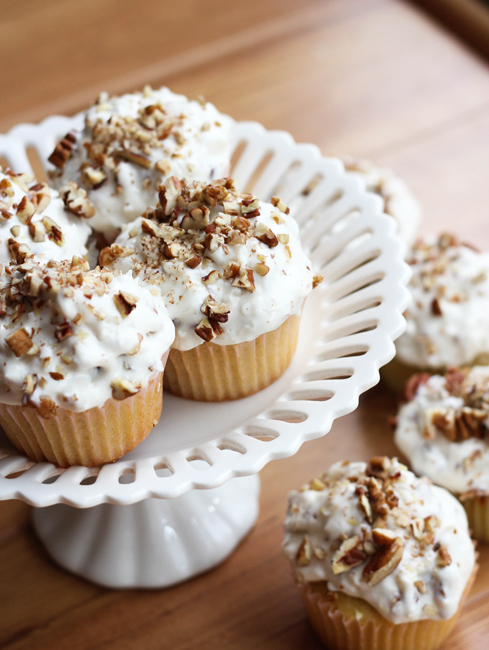 Throughout this PW Wednesday series, the ladies and I have learned to modify almost all the recipes we’ve done. This is because we want the recipes to be healthier or because the quantity was made for a circus. Most of the time it was both. We used Ree’s recipes as guidelines and we added, subtracted ingredients to our taste. Which is why this series is so fun. One recipe, five very different dishes as the final outcome. 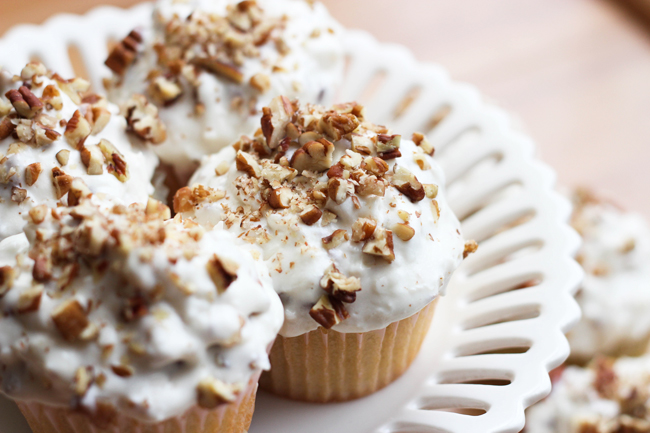 With that said, this week’s recipe was my choice again. I decided that we needed something sweet. We’ve done a bunch of savory dishes and while they have been nothing but amazing, we needed a sweet one to round out the savory dishes! So, I chose this cake. Err, cupcake? Again, modification.

The original recipe was a three layer cake that fed about 8-10 people. I really didn’t need that so I decided to halve the recipe and bake cupcakes instead! I really loved it. It has coconut flakes and chopped pecans IN the frosting and within the batter, there were coconut flakes. I only had half of one, the rest I gave to my coworkers and Jason. The reviews are this: not too sweet, the frosting is amazing, the cake batter is super moist, and love the coconut addition!

I must agree with all those. I did modify my frosting because I’m not a fan of getting a cavity as soon as frosting touches my teeth, so it definitely worked because everyone agreed this wasn’t a super sweet cupcake (which I don’t know how I achieved that because it seems like everyone else who made it this week thought it was too sweet). I love how moist my cupcakes came out. One friend said that he expected it to be a kind of dry cake but he was happily surprised with a moist cake. I’d have to say I think my favorite part is the fact that the batter is laced with coconut flakes. So yummy!

Grab the original recipe below for the cake, but here are my modifications:

Here are the ladies & their versions & opinions! It’s funny that two of us did cupcakes and the other two made the layered cake! I love us!

Megan – Wanna Be A Country Cleaver

Gina – Running to the Kitchen 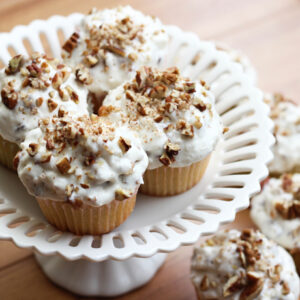 Source: page 243 of Ree Drummond's The Pioneer Woman Cooks: Food From My Frontier

Hi! Love the modifications, may I know how can i get your recipe for the cupcakes? Thanks!

Hi Shah, if you read the blog entry, the bulleted list tells you how I made them into cupcakes. Pretty much the same ingredients/process. I just halved the recipe.

These cupcakes are absolutely amazing! I'm delighted with them! I've featured this recipes on my blog! I hope you don't mind! If you don't agree with that please contact me and I will remove it. All the best.

Hi vera, it would've been nice if you had asked to used my photos before making your post. With that said, could you credit me for my photographs by saying "Photos by tablefortwoblog.com" or something along those lines?? Thank you.

[...] ended up using a recipe I found over at Table for Two. Her recipe is for a cake, however if you read her post you’ll find that she used it to make [...]