We’ve come to the last post in my Taiwan series! I can’t believe it’s almost over! Have you been enjoying the Taiwan photo tour? I sure hope so :)

After Kaohsiung, Jason and I took the HSR (high speed rail) from Kaohsiung to Hsinchu, where my aunt lives. It was a quick ride – I think a little under an hour. Hsing-Chu is the big tech city in Taiwan and a lot of semi-conductor companies are there. The interesting thing about Hsinchu is that they call it the “windy city.” And whenever the wind blows, which is often, all this dust gets picked up in the air. I don’t have allergies to anything and I don’t have seasonal allergies but as soon as we got to Hsinchu, oh my goodness – my nose would NOT stop running. I was sneezing and blowing my nose every minute. No joke. By the end of the first day, my nose was so raw from me wiping it so much. We ended up having to go to the pharmacy to pick me up some allergy medication – isn’t that so weird?!  Good thing those little pills worked! My nose was not happy!

My aunt and uncle took us to this place called The Taiwan Pavilion where there was this huge LED ball inside a glass building shaped like a lantern. This LED ball was actually in Shanghai at the World Expo there in 2010 and Taiwan bought it like some crazy amount of money and shipped it over. It’s pretty cool but I wouldn’t pay to go inside and watch the ball light up. You can see it perfectly from the outside. Underneath this pavilion, there’s shopping and restaurants. I completely forgot the name of this restaurant but there was some really good food there! 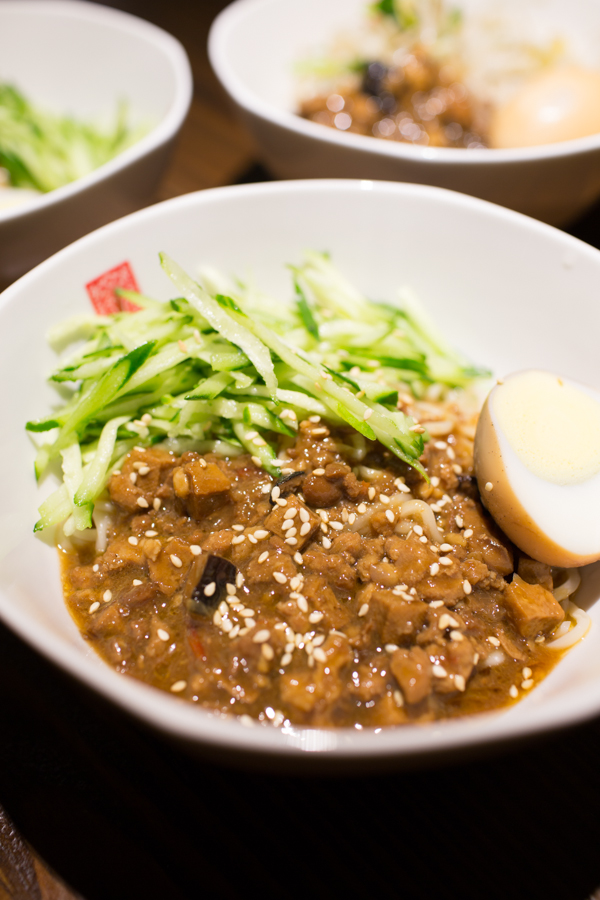 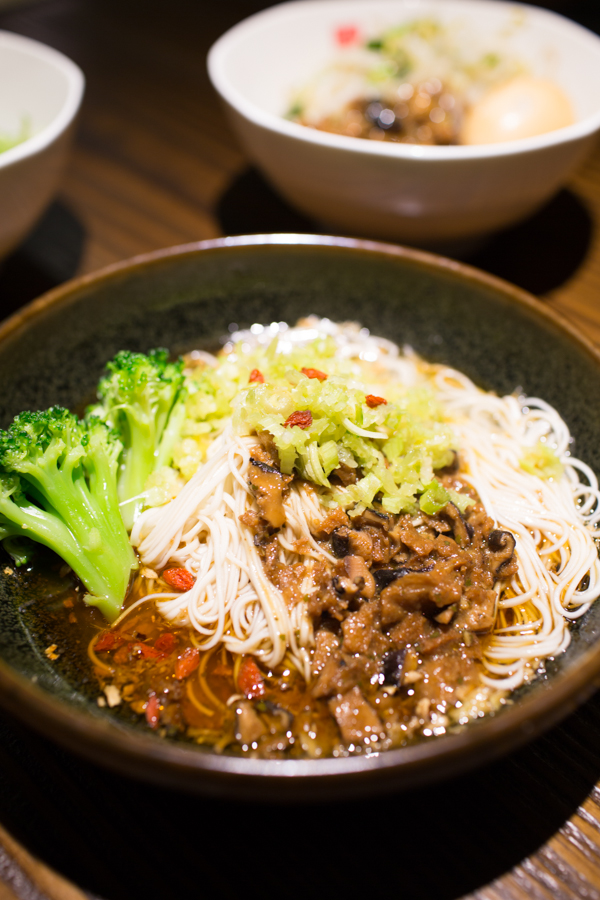 This is what you get when you order a small bubble tea there ;) 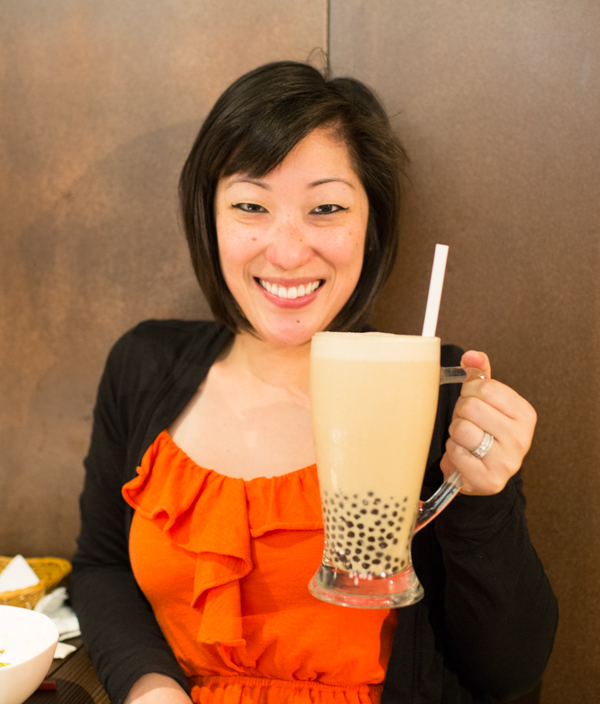 This was that big LED ball 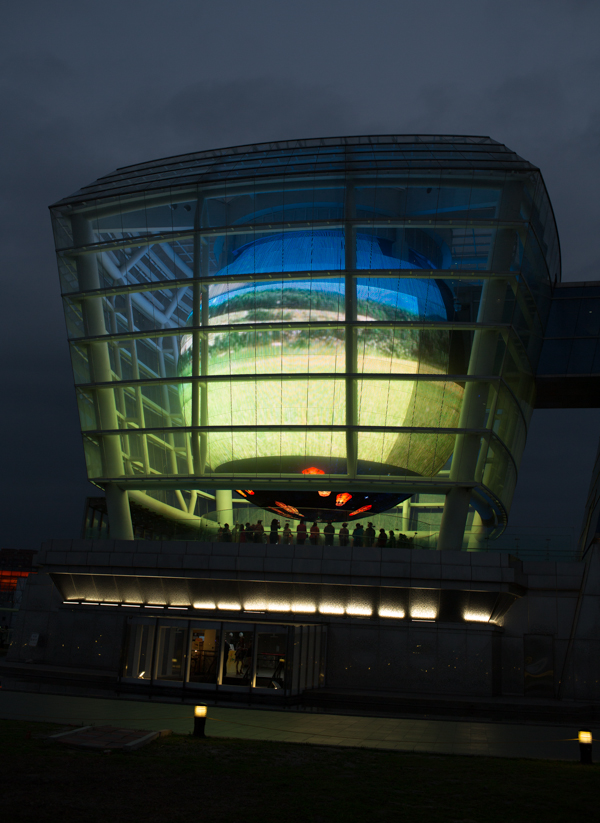 Taiwan is famous for their take-out boxes. I could probably eat this every night – couldn’t you?! 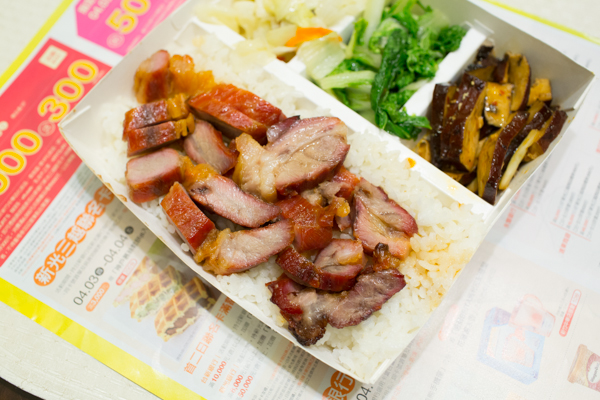 Taiwanese rice balls (飯糰)!!! These are the most amazing breakfast items ever. I LOVE them! It’s a rice ball and inside they stuff it with an oil stick, pickled vegetables, pork floss, mushrooms, and whatever else that shop wants to stuff in there. And you eat it like that for breakfast. I seriously loved these. My mom brought two on the airplane ride home for us and it totally hit the spot. After 9+ hours on a plane and sleeping a bit, you wake up hungry and this totally made the flight! 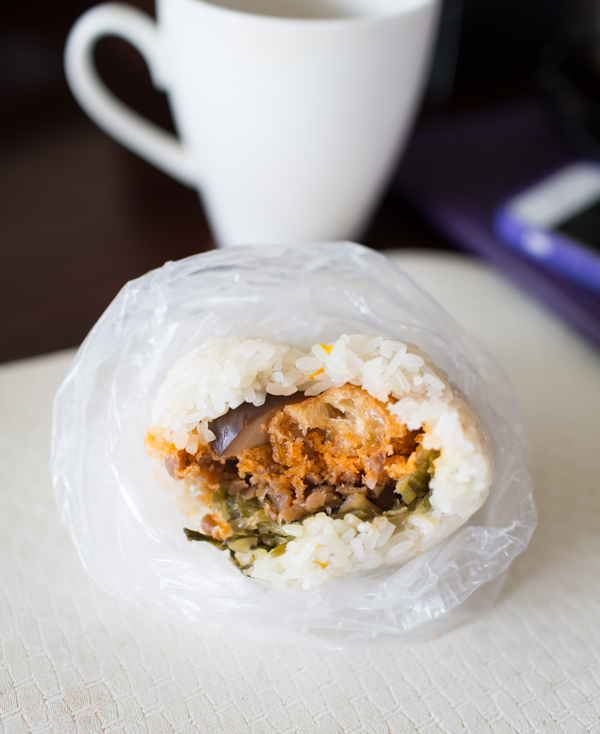 The most important part of this trip was visiting my great uncle’s rice farm. It’s right outside Hsinchu in the country and it’s one of the most beautiful and serene places. It’s tucked away near the mountains and this farm has been around for over 120 years. Him and my maternal grandmother, along with I think 5 other siblings, grew up on this farm. He has worked so hard to keep this farm and maintain it. It’s beautiful.

He also does daily tours of the farm and sweet potato and chicken cooking in a hot rock fire pit (keep reading – it’s super interesting). It’s the most unique way of cooking. It’s very rustic and it’s how people used to cook their food without ovens! 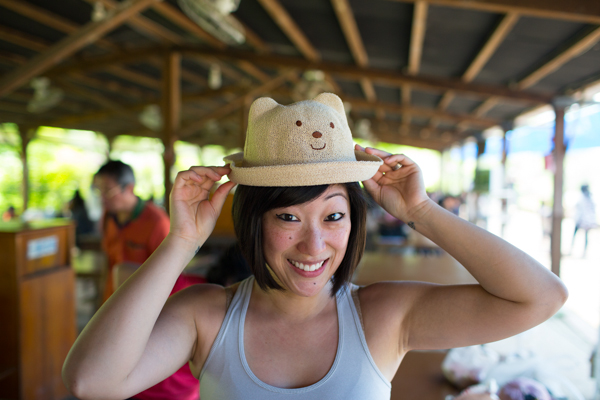 The basket of sweet potatoes ready to go in the rock-made ovens! 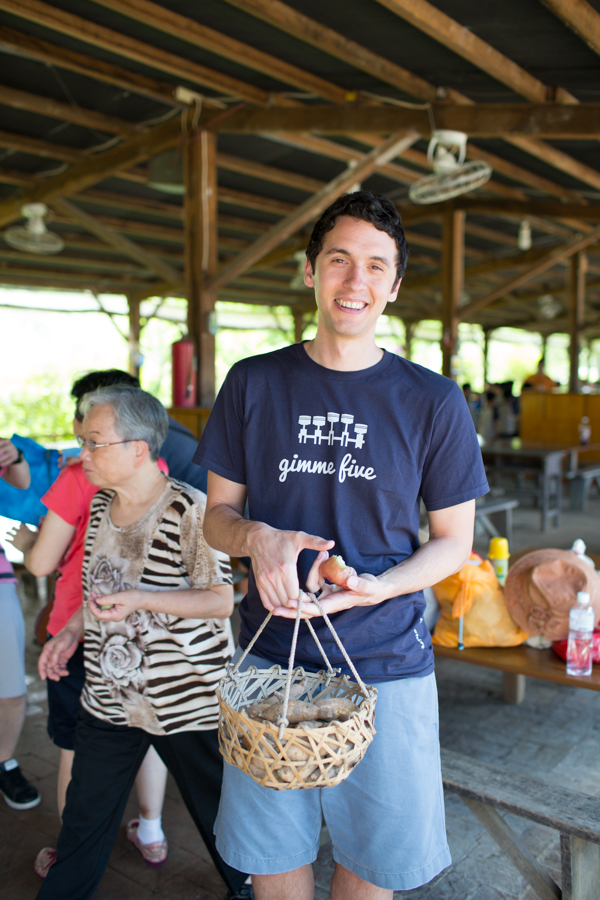 So this is what you do – you use these rocks and start building a volcano-like structure.. 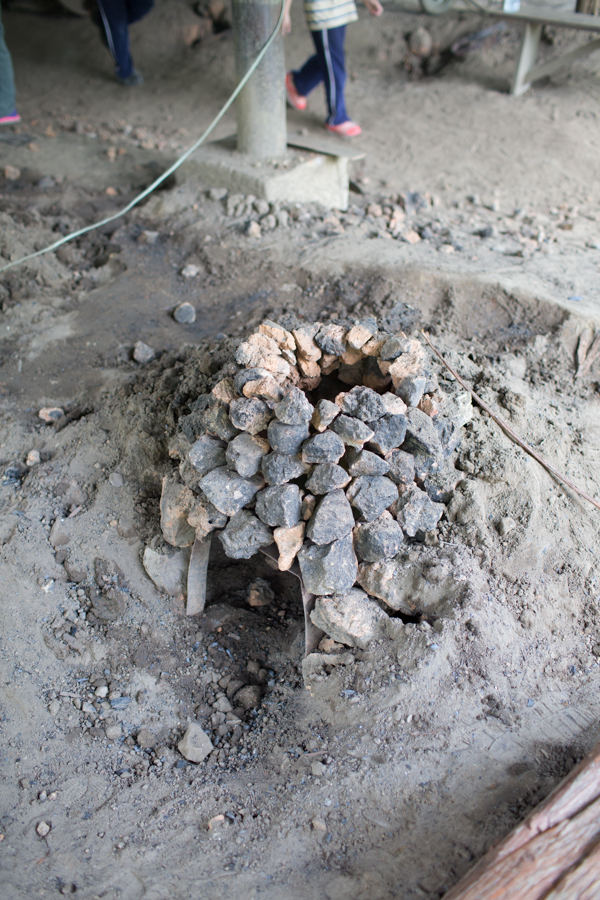 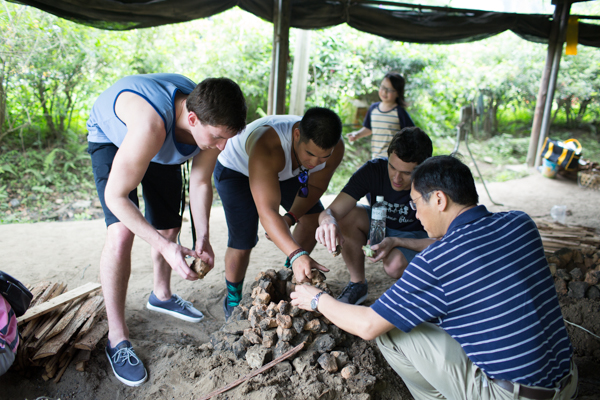 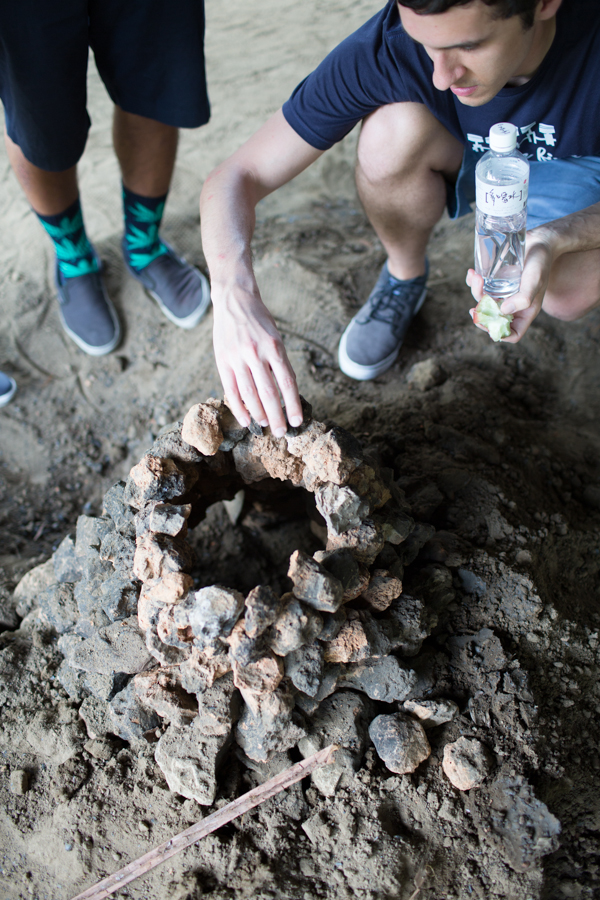 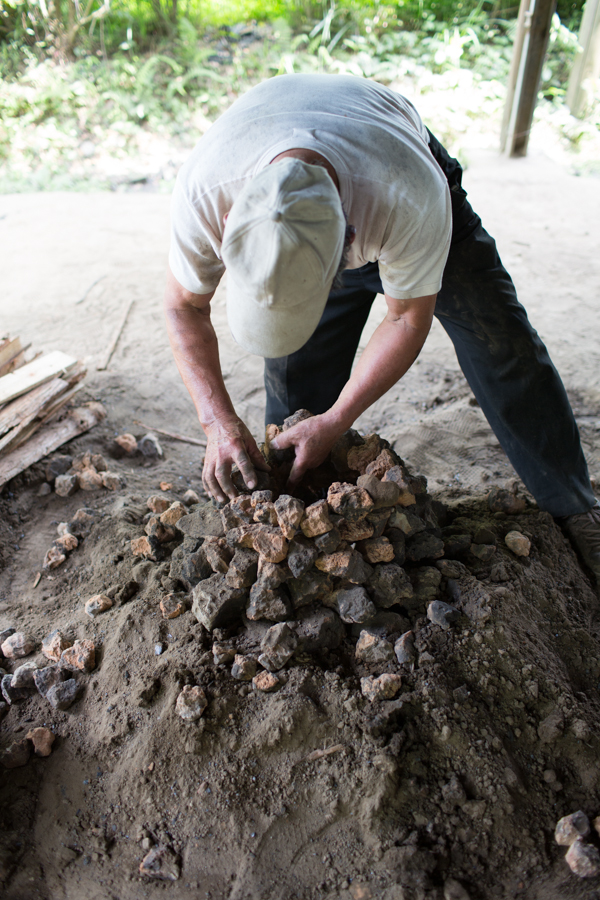 This is how it’s supposed to look when it’s complete. 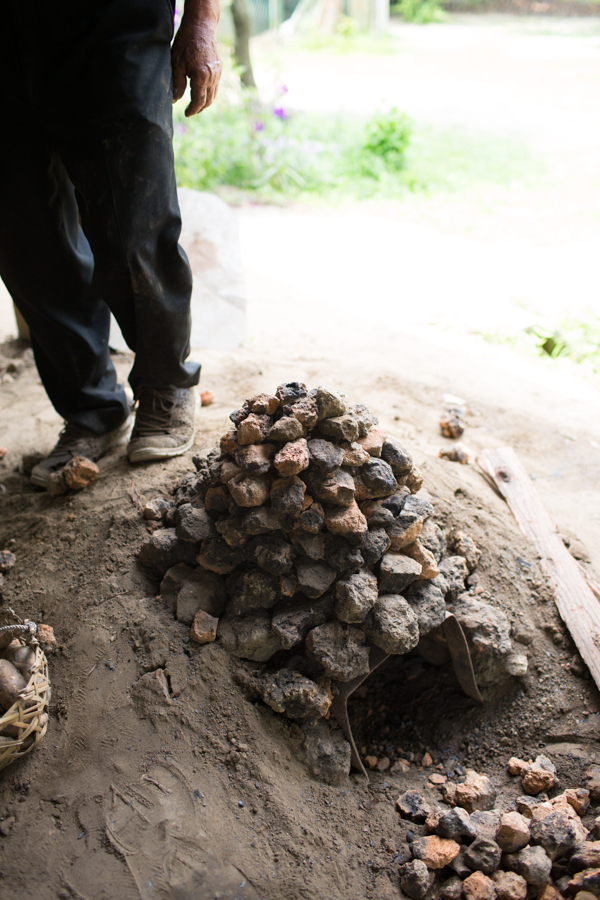 You then put pieces of wood under the rock structure.. 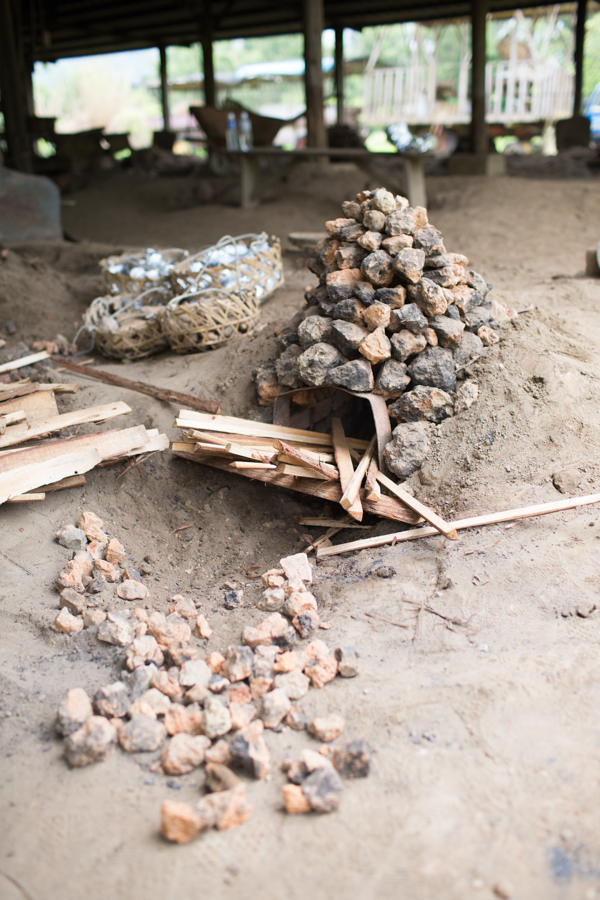 And light it up!! You let it engross itself in flames and heat up the rocks until the rocks turn red..that’s when it’s time to throw the chicken and corn into the pit! 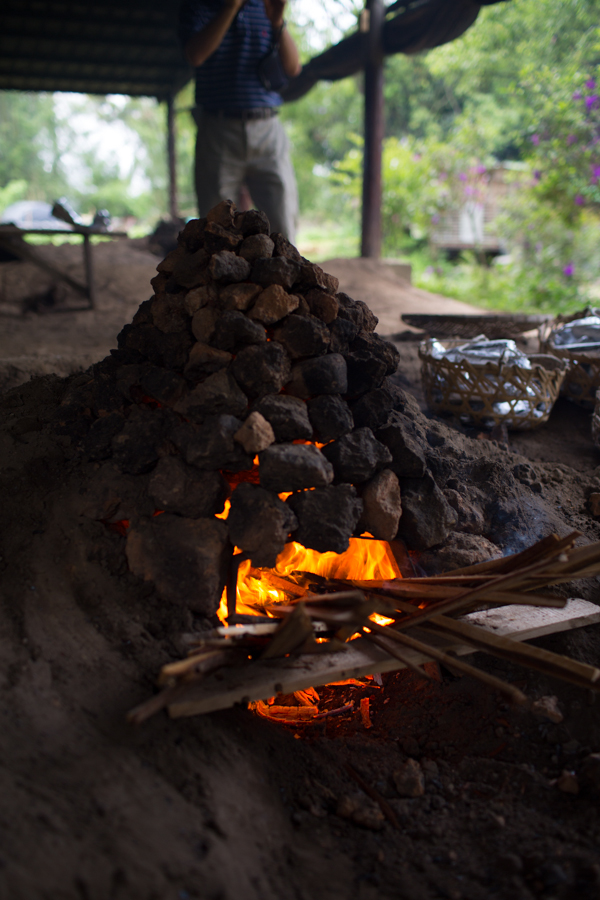 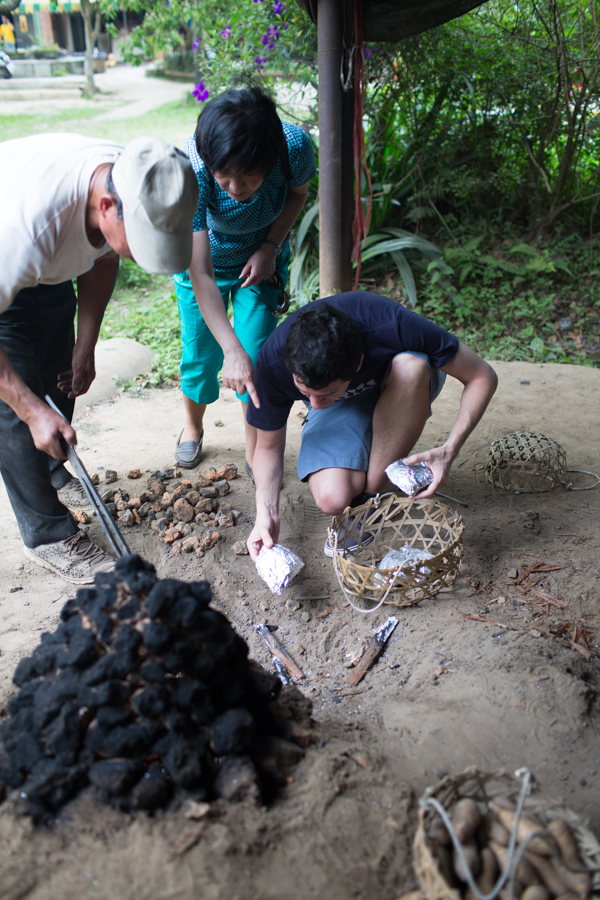 Then, after you have thrown the chicken and corn into the pit, you knock down the rocks and place the sweet potatoes on top and cover the pit with dirt. 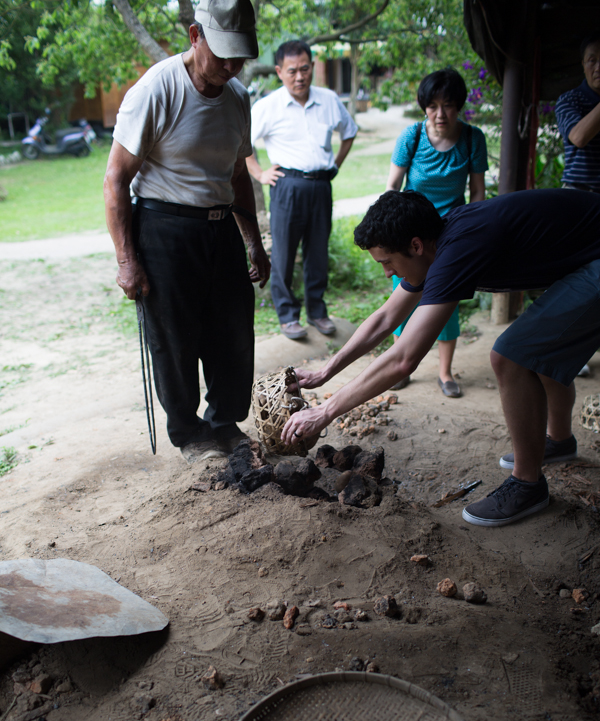 Eventually it’ll all get covered with dirt – all the dirt mounds you see all have sweet potatoes, chicken, and corn cooking inside! You wait about an hour and then it’s all done (photos below of the finished product!) 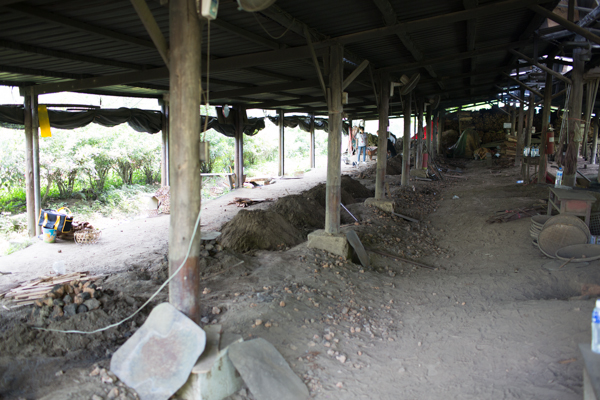 Meanwhile, you get to walk around the farm and look at all there is to see! My great uncle also has this museum set up in the back where you can see what rice farmers wore back in the day when they were out in the fields, and also, he has a really ancient rice miller where you manually shell the rice. 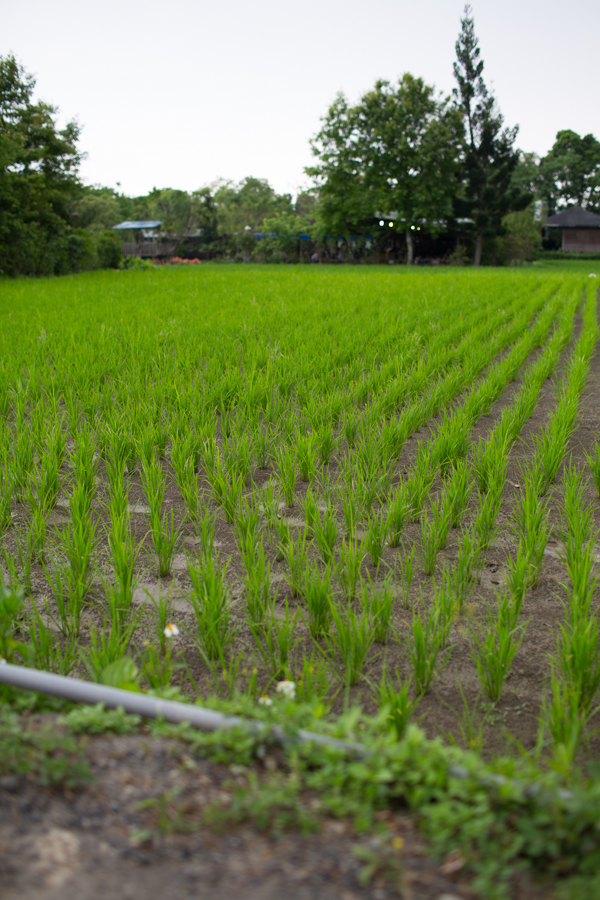 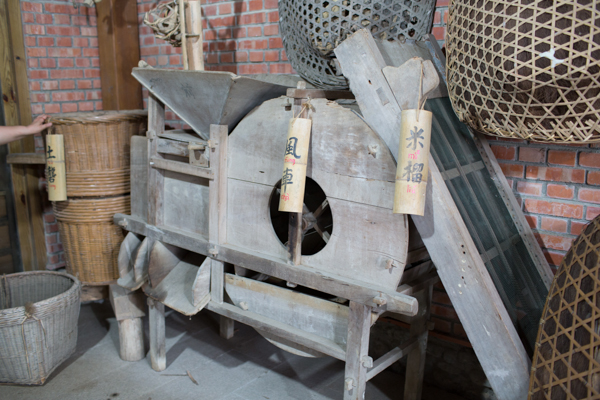 This is the rice mill I was talking about 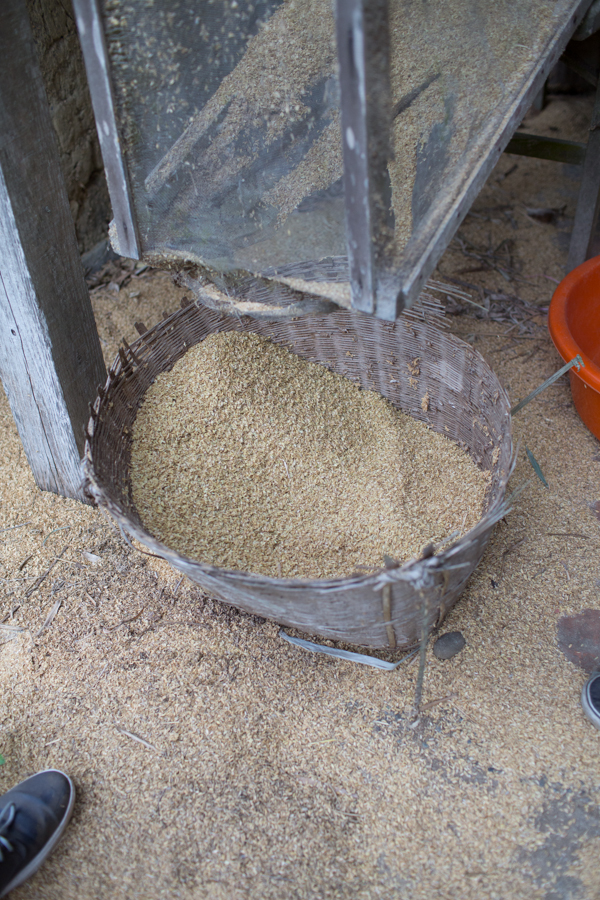 Here’s another similar one 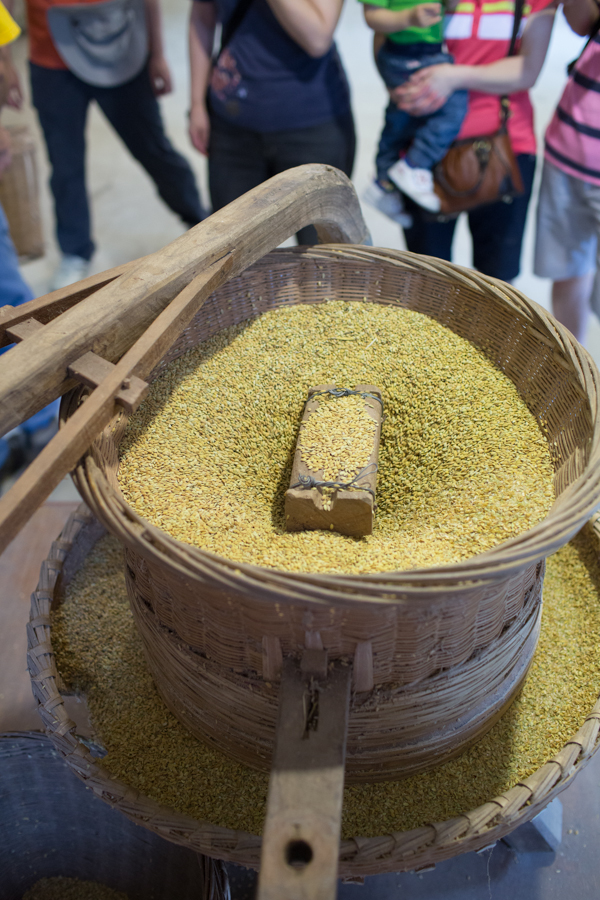 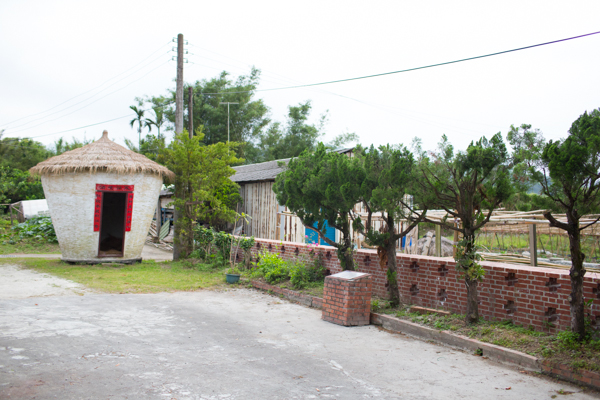 An hour goes by really fast! And then you get THIS….

Doesn’t that look AMAZING?! Yup, all that cooked through and with a beautiful crust in an hour in the fire pit! 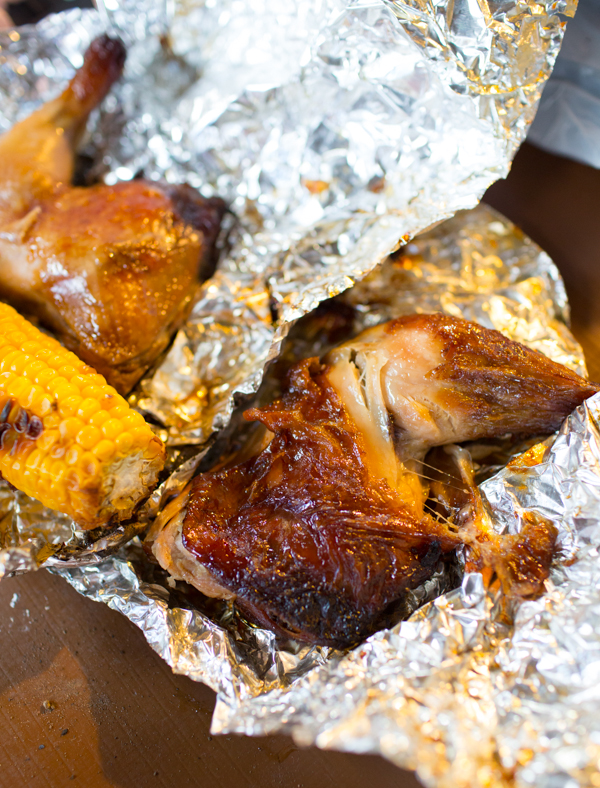 These beautiful white flowers only bloom in April in Taiwan. A bunch of trees in the mountains have these and it looks so pretty when you look up the mountain! 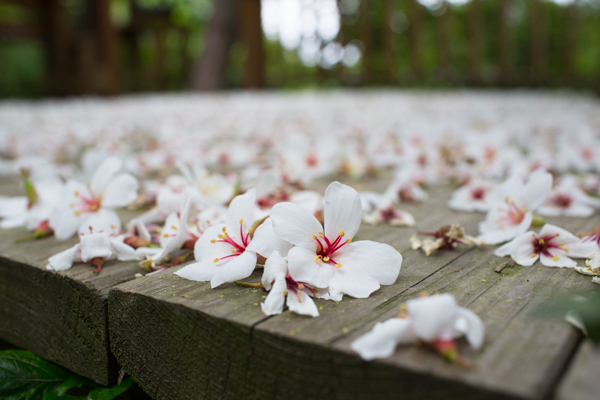 So, this is completely random but Jason and I really wanted to see what Costco in Taiwan was like. It’s basically everything Asian in bulk. HEAVENNNNN!! And their billboards were super cool and different. Oh, and their food court had Asian food!! Ahh, no hot dogs or anything..but like Taiwanese sausage and shaved ice. So different!! 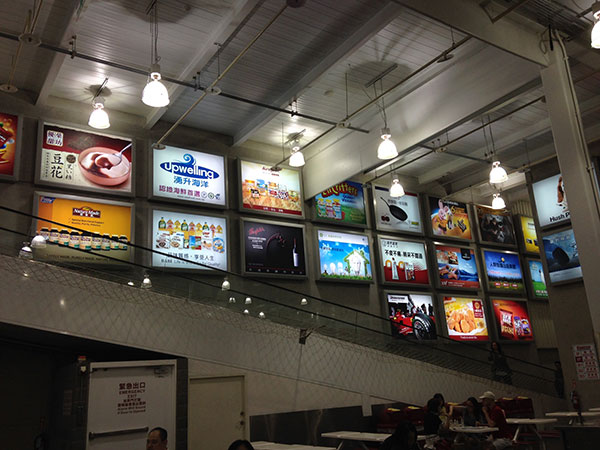 I wish we had an Asian Costco..I mean, who doesn’t need a huge tub of miso?! 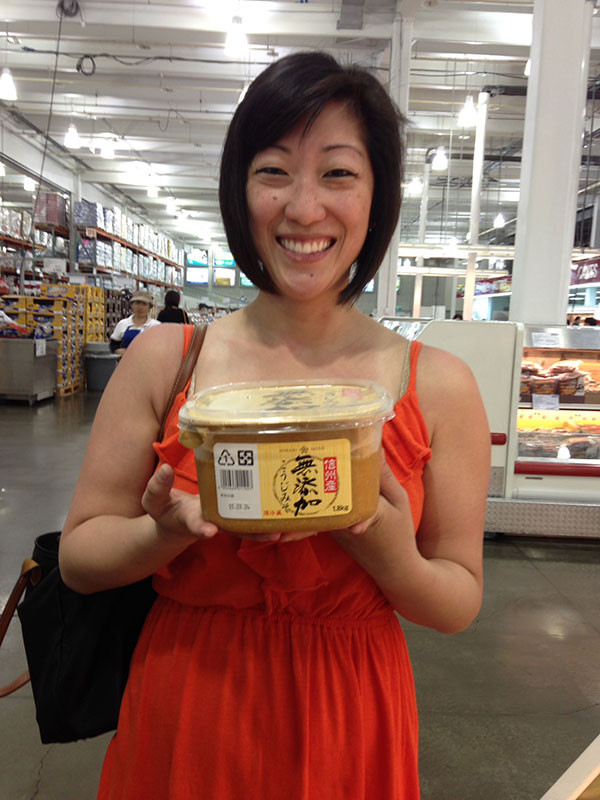 May I know what's the name of the farm you visited? It looks cute and I would love to visit the place.

I don't remember the name of it because it's in Chinese! Haha...I would maybe just try to Google 'sweet potato farm for kids' or something b/c they do tours there for little kids. :) the last name is 張

Yes! Those rice ball things!!! My mom makes this version where you use sweet/glutinous rice to surround a piece of you tiao. You can also sprinkle some sugar in between the rice and you tiao to make it a bit sweeter. I need to make some now!

All of your pictures are so great! It looks like it was the best trip filled with lots of good eats!

So anxious to get to traveling, love this series!

I'm going with you next time. Deal?