Jason and I traveled down to the south of Taiwan to Kaohsiung for a couple days. With all the years I’ve been back to Taiwan, I have never gone south before! This was the perfect opportunity to go down there because it was Jason’s first time in Taiwan I wanted to give him the ultimate tour. It’s so easy to get to Kaohsiung now that there is the bullet train (high speed rail / HSR). It took only 2 hours on the train to get there when normally it takes 5+ hours to drive down there. Crazy, huh?

The first thing we did was meet up with my friend from college who lives there and he and his girlfriend took us to this amazing Taiwanese restaurant that serves traditional comfort food. Food that you’d find at your grandmother’s table and food that’s a staple in every home. 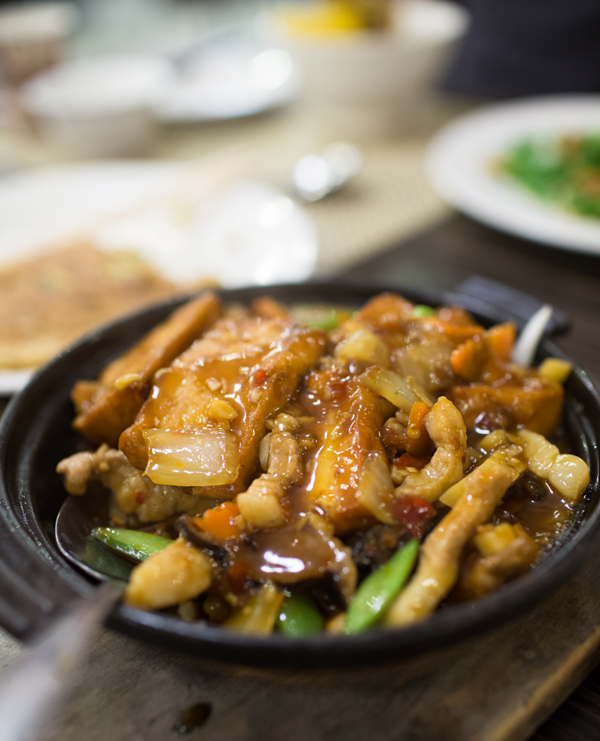 Ok, watercress spinach is HUGE in Taiwan and it’s my FAVORITE vegetable ever to have grown in the ground. Really, I eat more plates of this than normal when I’m in Taiwan. It’s so hard to get in the States and it’s so expensive. Every time a restaurant in the States has it, I jump at the chance to order it. I had my fill in Taiwan and my tummy was so very happy! 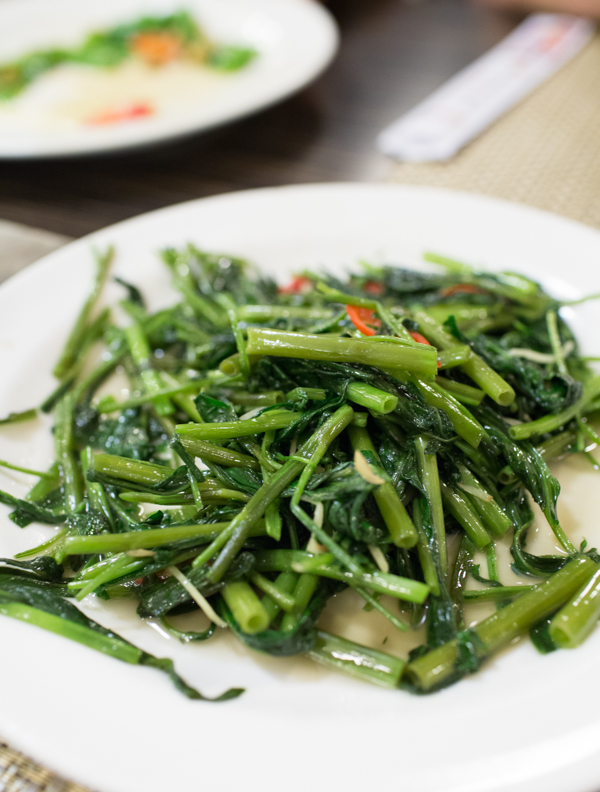 Ahhhh three cup chicken (三杯雞)..remember my blog post about it?! Mine looks nothing like this but man, is it ever close to it and tastes just as delish!! 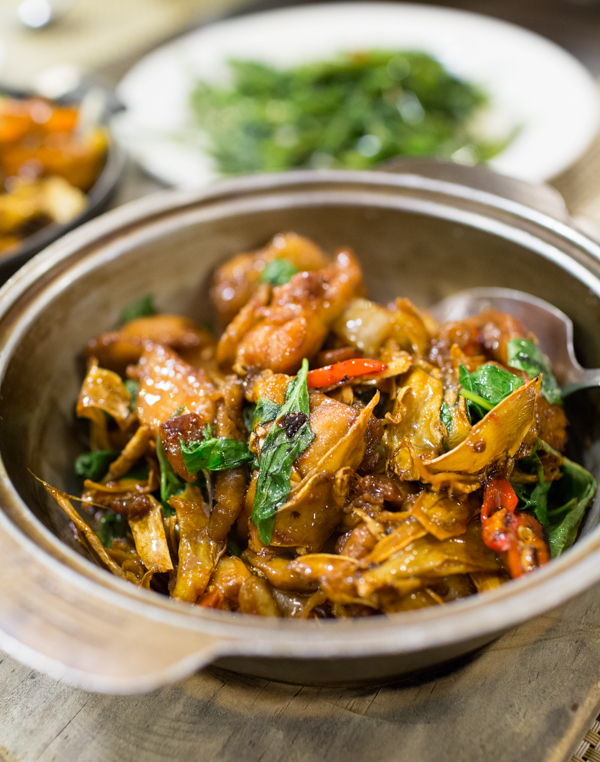 The next day, we had an entire day to go around Kaohsiung and one of my cousin’s girlfriend’s brother happened to be in town when we were so he took us EVERYWHERE. He’s a local so he knew exactly what to take us to. Thankfully he didn’t mind. It was a pretty hot day and it’s a bunch of touristy stuff, but he said since he hadn’t been home in almost 8 months (he works on a ship), he enjoyed getting out and sight-seeing because he felt like he’s missed out while he’s been gone Well lucky us! :)

The first place we went was Lotus Lake and the Dragon and Tiger pagodas. You can easily get to these via MRT (there’s only two lines in Kaohsiung) and then take a cab here. This is pretty much sight-seeing but there are a bunch of temples and local eateries around the lake. 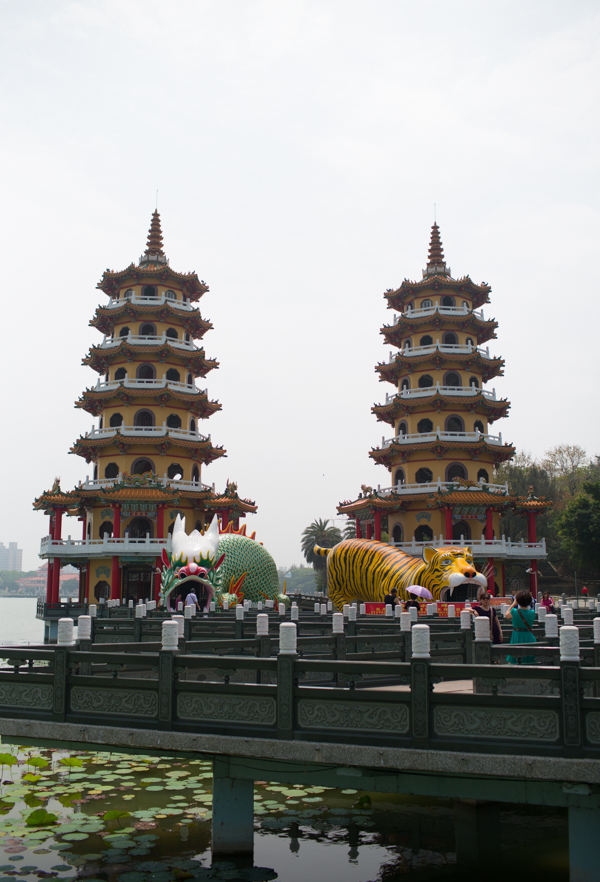 We climbed like three or four floors of the pagoda. You can definitely go all the way up if you’re so inclined! 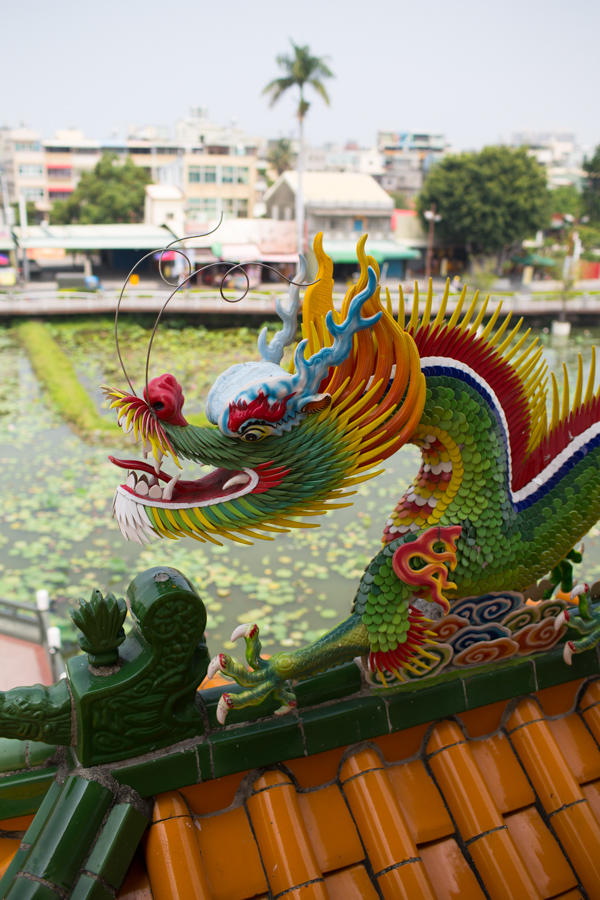 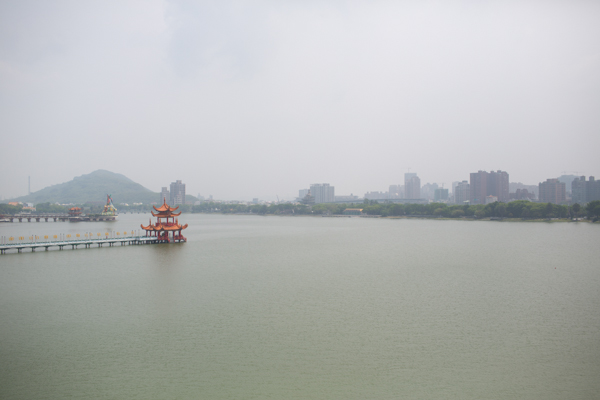 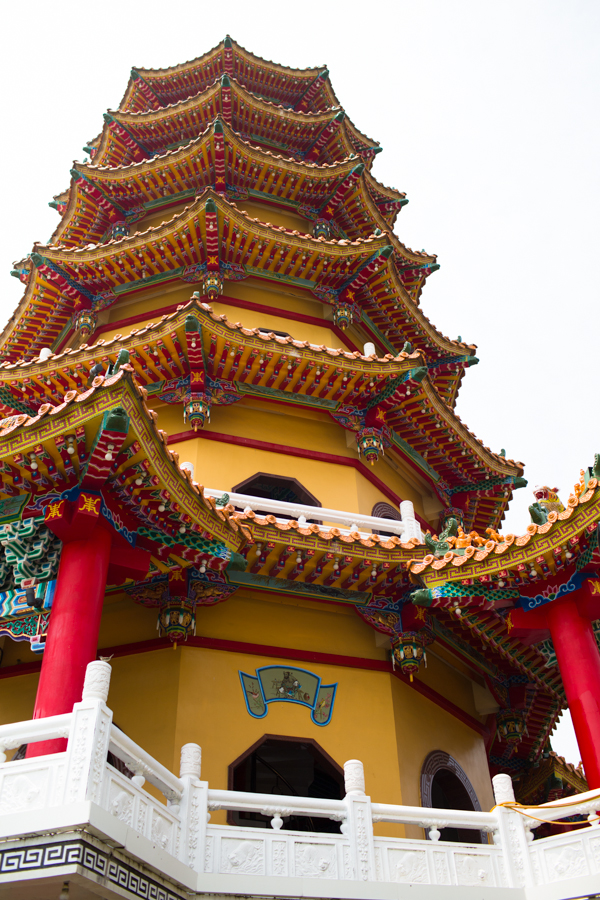 The temples in Taiwan are all so intricate and gorgeous. 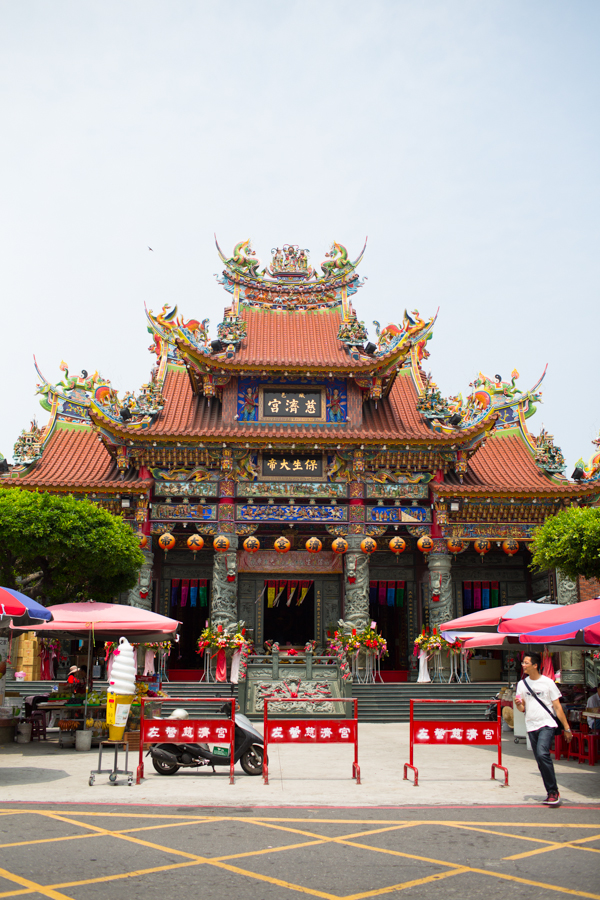 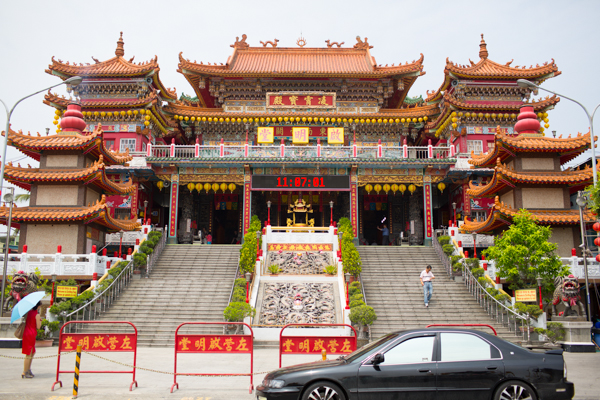 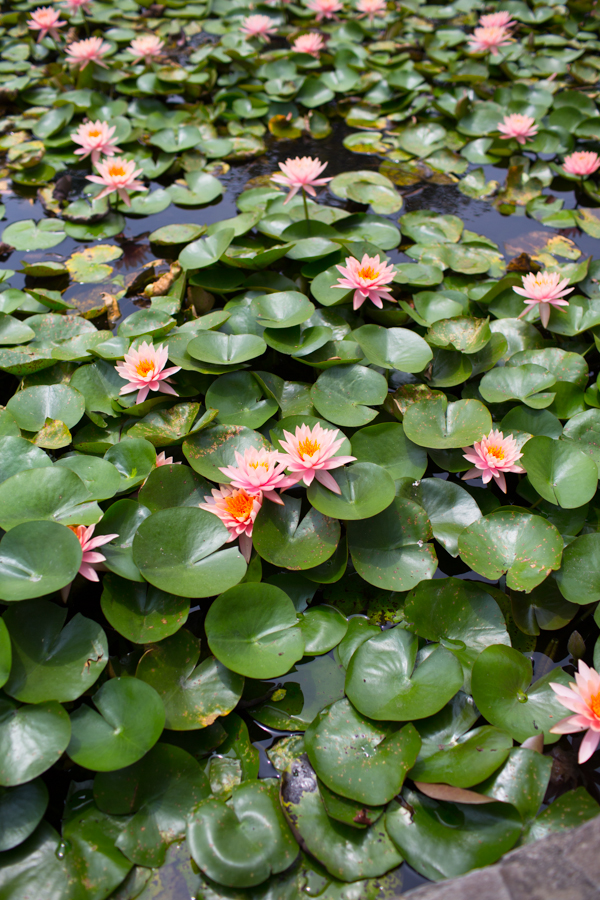 A short walk and then you get to Confucius Temple! 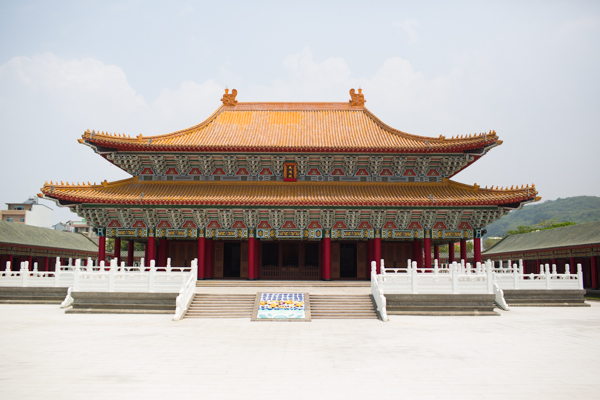 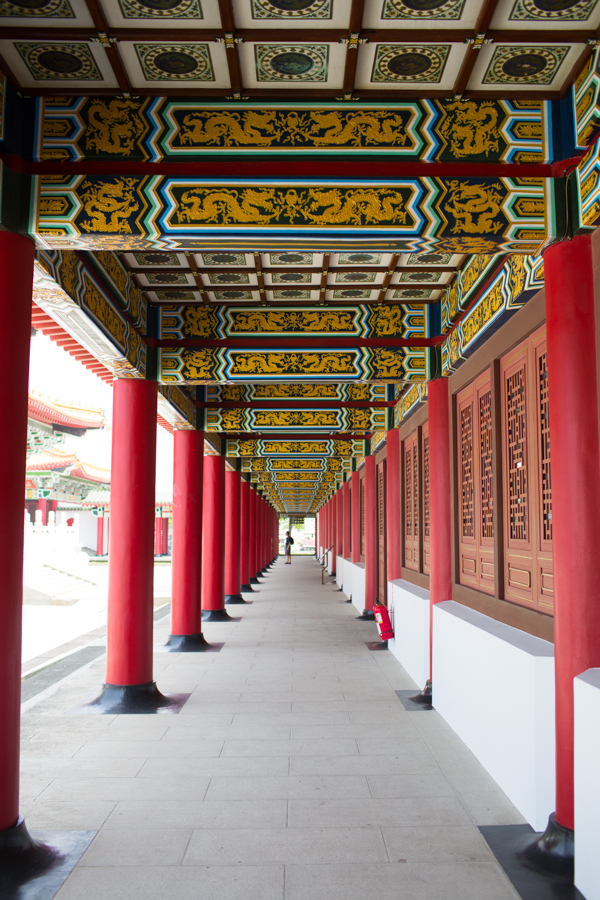 Our friend then took us to this local beef noodle soup place to get some grub. It was sooo good! As you’ll see below, the noodles here are handmade & handcut so every noodle was a different size and length! It was so chewy and perfect for the soup.

This was a really nice dish to have because it’s a cold dish and it was really hot outside after walking in all that humidity and sun! This was called pidan tofu (皮蛋豆腐). Pidan, or century egg, is a duck egg preserved in clay with seasonings. With time, the egg white turns into a translucent black jelly and the yolk develops a unique flavor. Typically the dish is topped with soy sauce, scallions, sesame oil, vinegar, and pork floss. I like to mash mine up but when I did that, my friend looked at me and was like, “what are you doing?!” haha 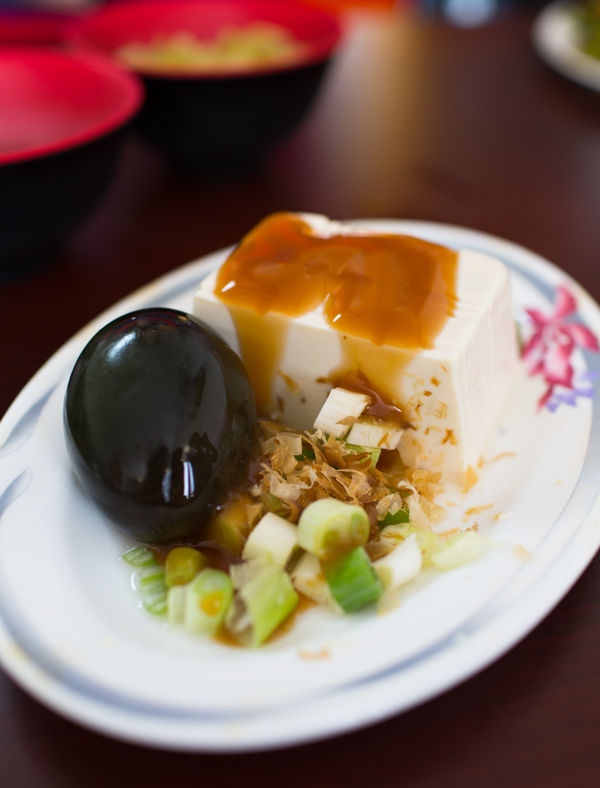 OMGGG..this is making me so hungry, haha 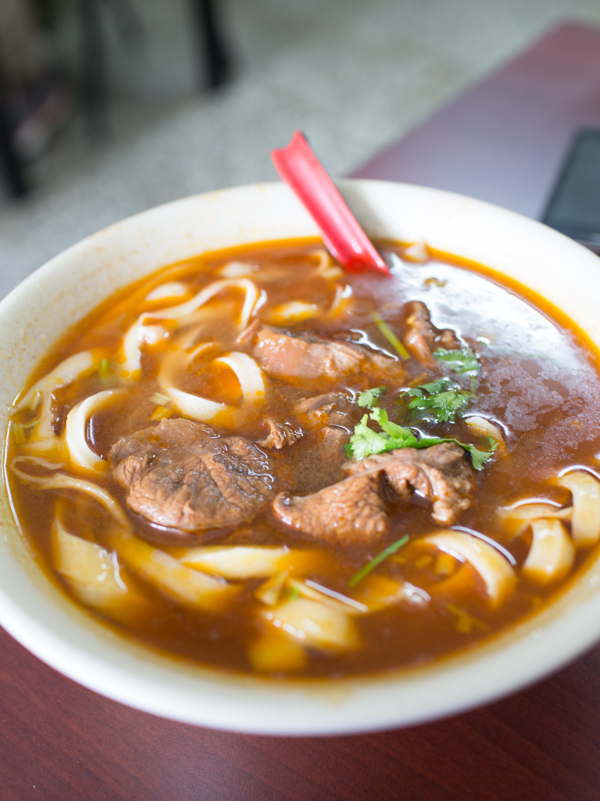 The handcut and handmade noodles were the best! 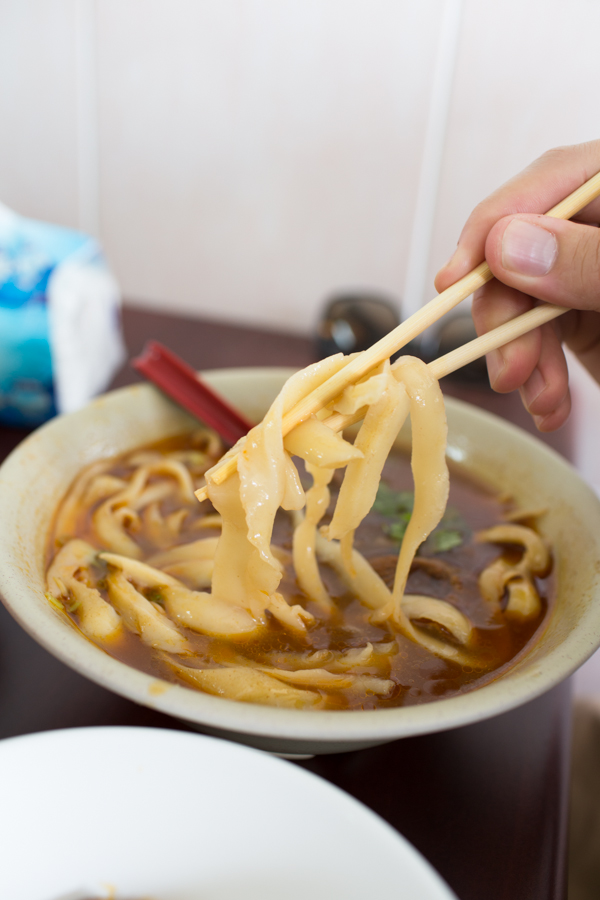 After we got our energy from big bowls of beef noodle soup, we rented bikes and biked over to the Pier 2 Arts Center. It’s this huge forgotten and abandoned warehouse area that got turned into an artistic warehouse cluster. The place is HUGE and you can easily spend a couple hours here just walking around and going into shops, exhibitions, and even model homes made out of shipping crates. Seriously, even though it was blistering hot, we took our time and just admired all the art!

This mural was so neat. Doesn’t it look like we’re about to head down to a MRT station?! 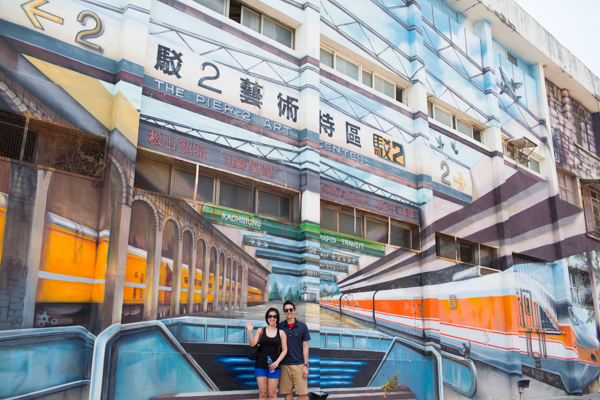 Um, if bumblebee were real, this would be him!! 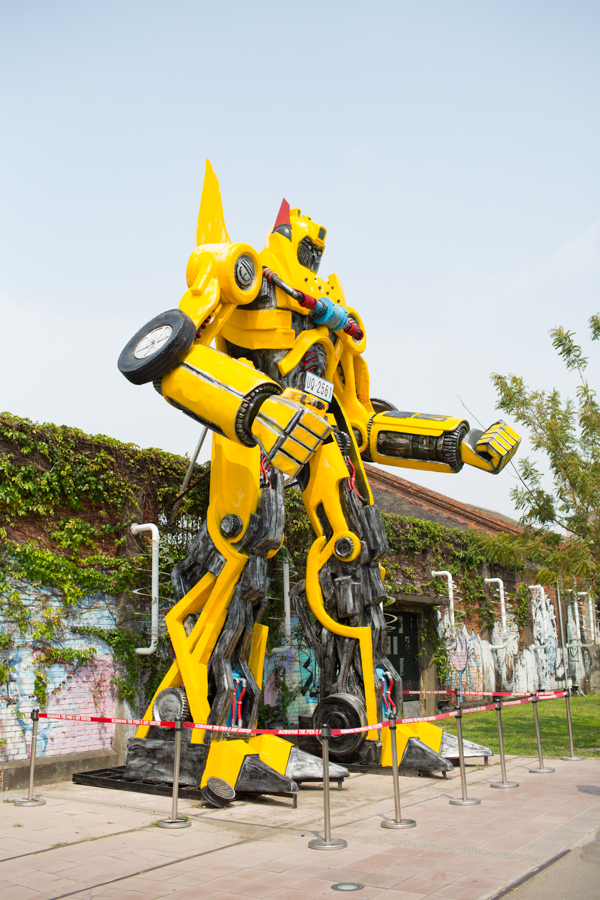 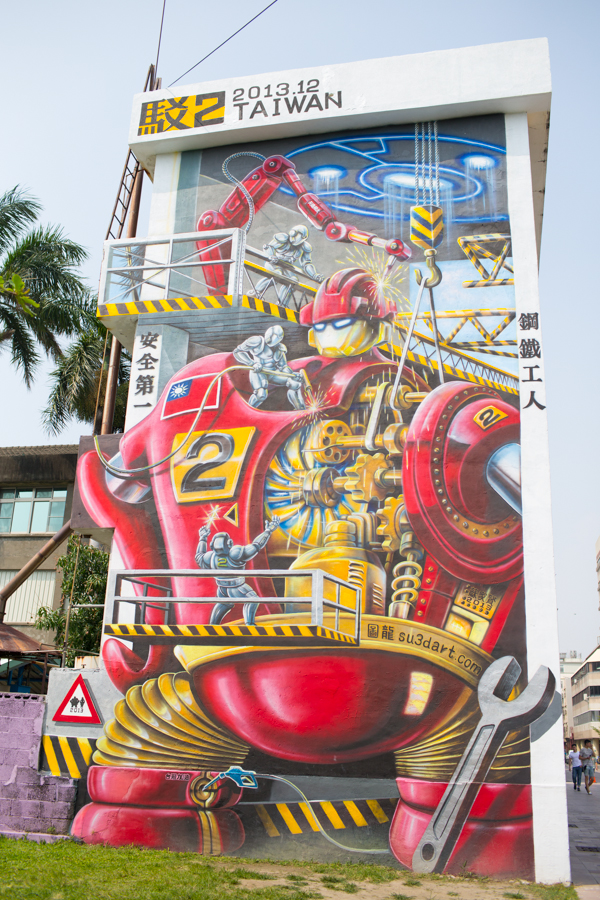 I took a bunch of photos here but didn’t want to fill this entire post with art but with those few photos you kind of get the idea of what this place is about and it’s DEFINITELY something you should check out if you’re in the area.

We then biked over to this shaved ice place and ordered a MASSIVE mound of shaved ice + fruit. 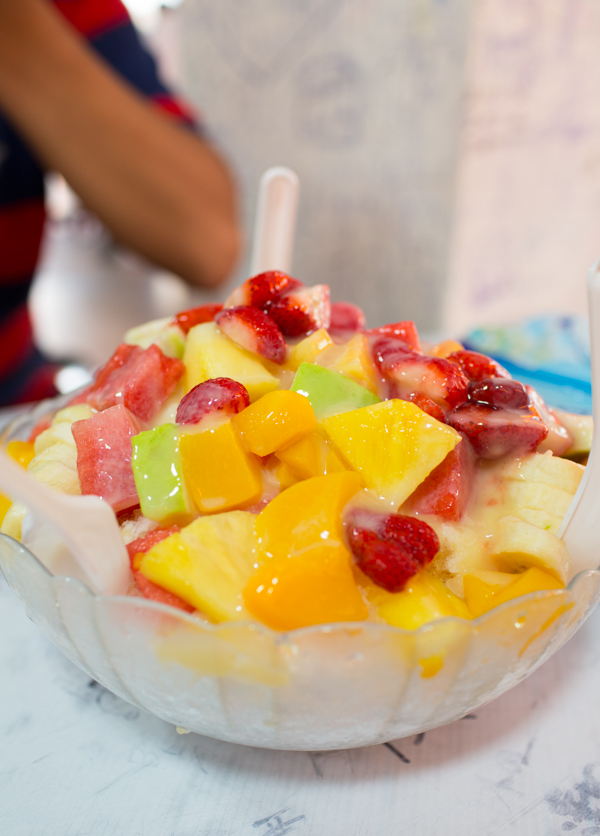 We then biked over to Cijin Island. Well, first we hopped on a ferry, that accommodates scooters, bikes, and humans, and it took us to the other side of the island which is known as Cijin. It’s famous for its lighthouse and it’s right near the coast so it’s really relaxing and calm. 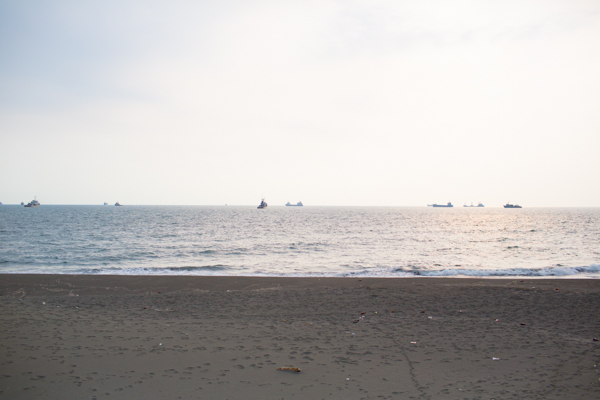 Yeah so this was a huuuuge hike up to see this lighthouse but very worth it in the end! You got to catch the skyline of Kaohsiung! 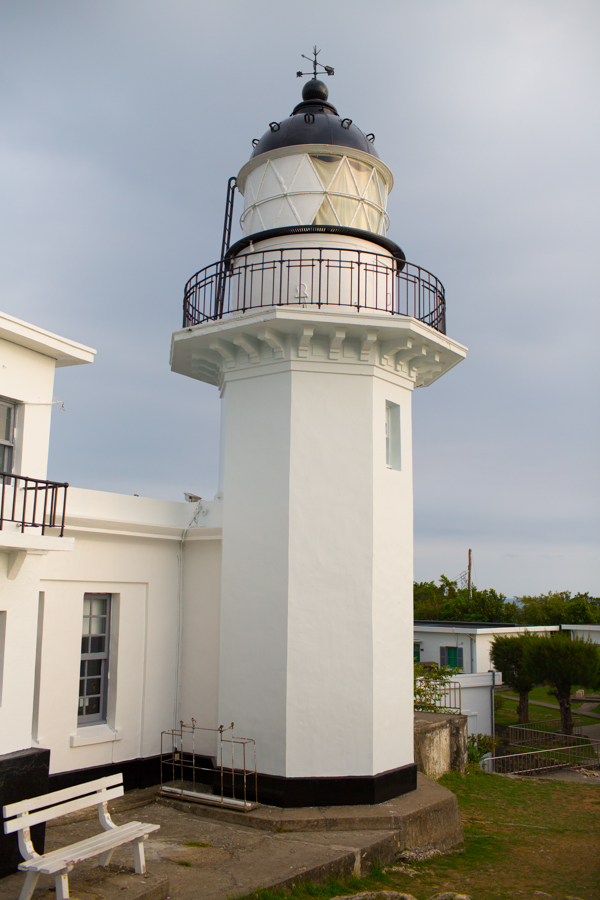 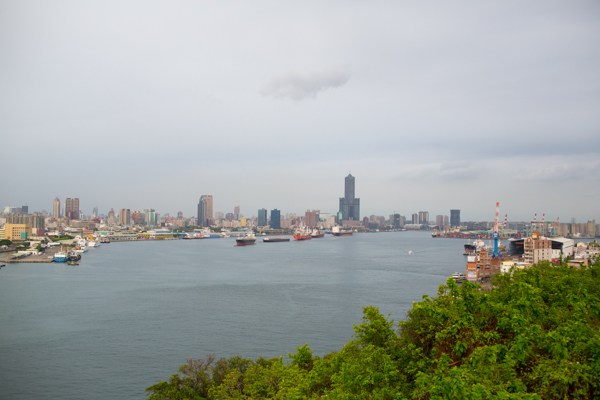 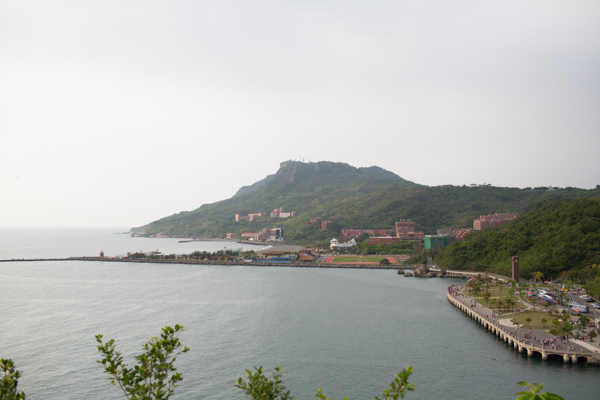 At one of the MRT stops in Kaohsiung, Formosa Blvd. stop (美麗島站), there’s this gorgeous piece of glass work there. It’s called the Dome of Light. It’s simply spectacular. I wish all our subway stations were this pretty in DC ;) 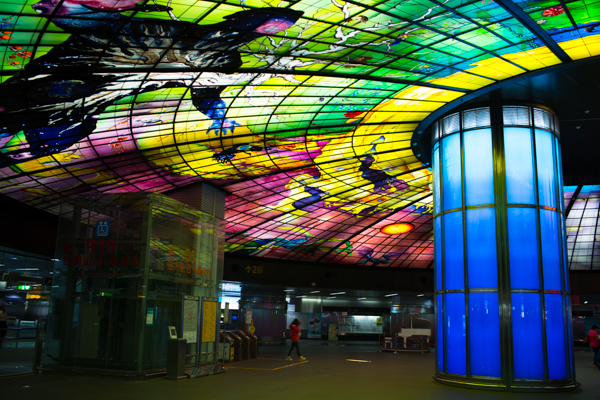 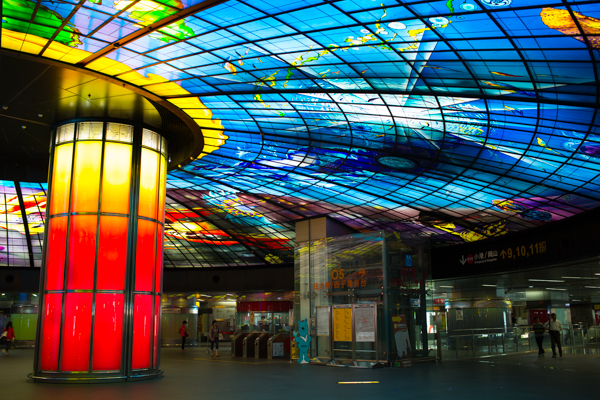 We didn’t really eat dinner in Kaohsiung that night because we went back to our hotel room and simply passed out for two hours. Our friend later met us up at the night market there (it’s the biggest there is because it’s three night markets connected to one!) so we just got street food and ate to our hearts content :)

Salt & pepper chicken has got to be one of my favorite night market foods! 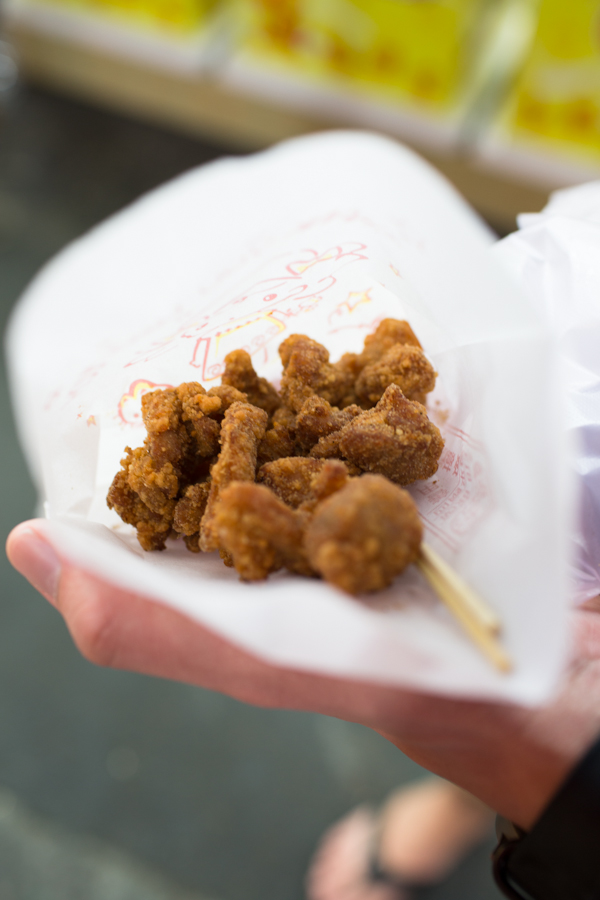 These were fried shrimp cakes that were equally tasty 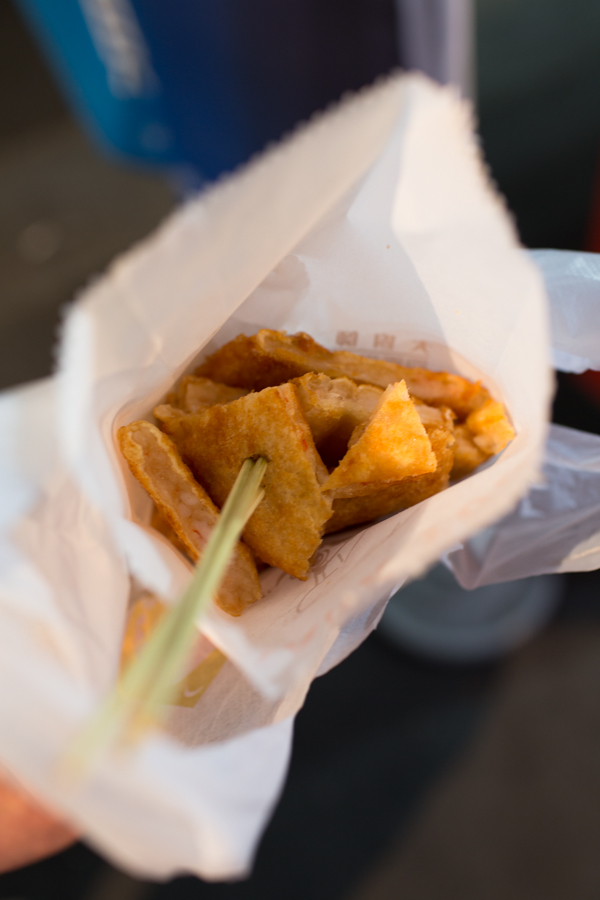 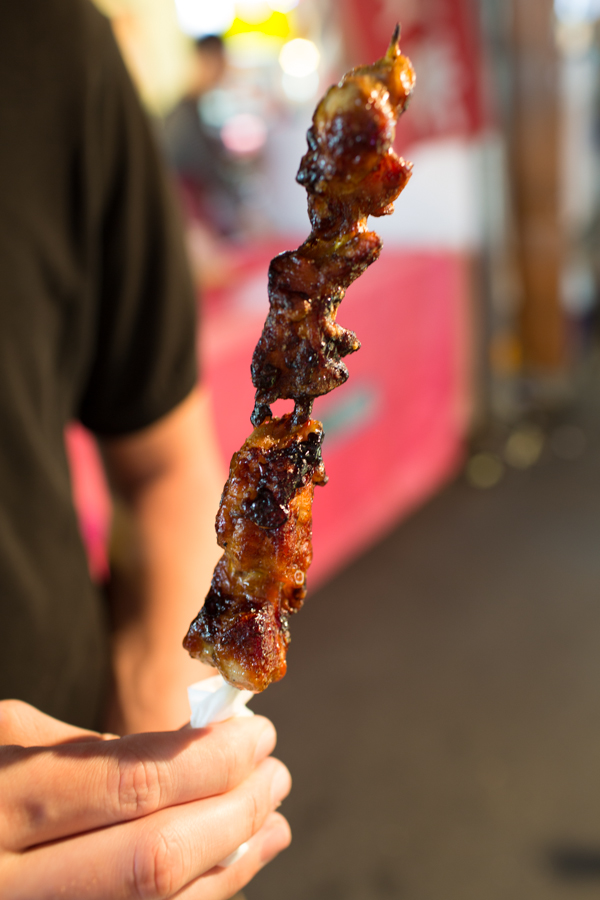 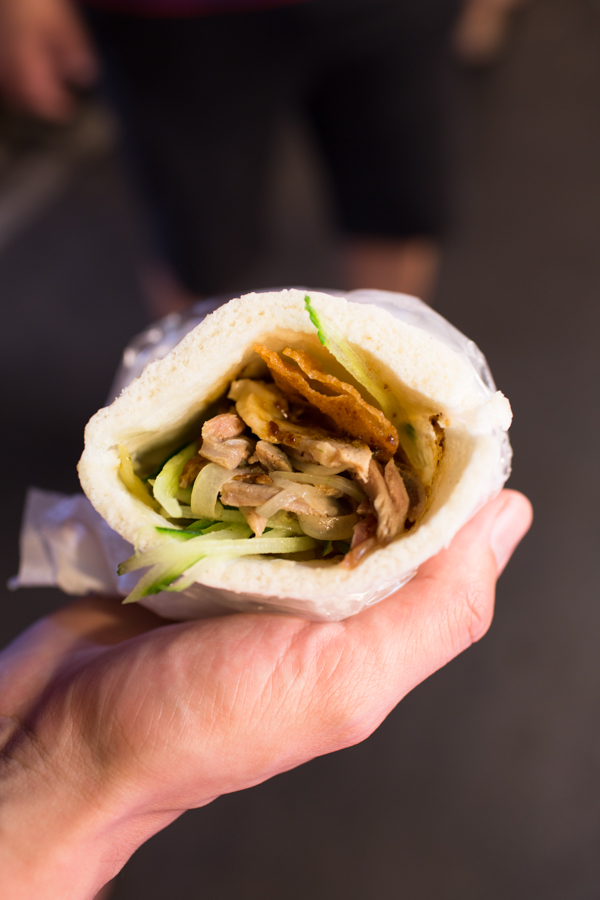 I think inside these pancake-type balls were cuttlefish. There were a bunch of ‘flavors’ or toppings you could choose from. My friend did the ordering and we just ate, haha 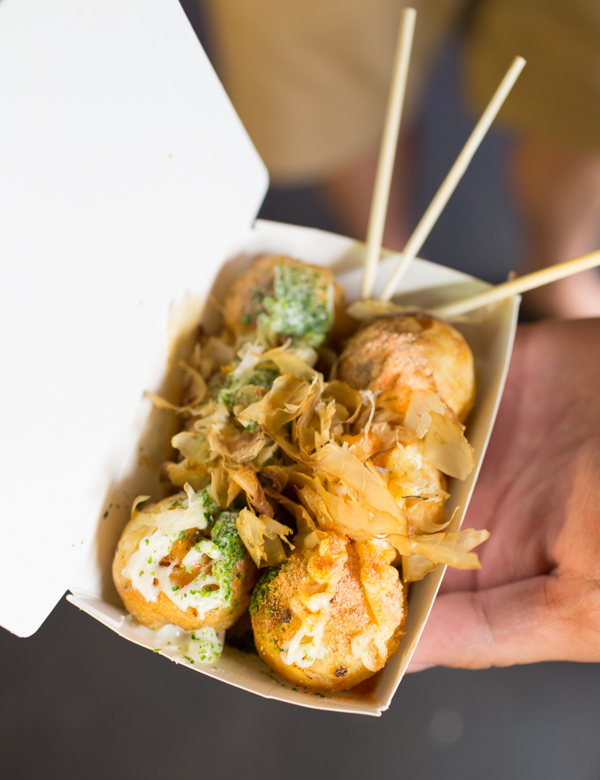 Your last three Taiwan posts have made me seriously reconsider what I am making for dinner tonight. haha Missing some good night market foods and authentic bubble tea!

Gahhh, you`re making me drool with these pics!

Man, I need to make sure I get to Kaohsiung, too. What a great post!!

These are great photos! I need to put this place on my Bucket List to visit.

Oh my gosh, I haven't had watercress spinach in forever! It's so difficult to get over here (The Netherlands) :( Definitely craving some right now ;) The scenery is amazing. Me and my boyfriend will definitely have to visit Taiwan someday.. Beautiful ^^