“Hi there, Julie? I’m here to pick you up for the Anderson show. I’m parked right outside.” Not a bad way to start your day, huh?

Back in December, I was contacted by the assistant producer of the Anderson Cooper Live show and they wanted me to come up to NYC to be the blogger of the day. Unfortunately, they had only given me less than 18 hours notice so there was no way I could make that trek. I told them that I’d love to come some other time and for them to keep me in mind. Apparently I left an impression on the assistant producer because she ended up contacting me again last Friday to ask if I’d like to come up this again today. I could not pass up that opportunity. I immediately accepted the invitation, booked our hotel room, booked our train tickets, and we were set to go up to NYC!

To say this trip was a whirlwind is an understatement. We were literally up in NYC for 19 hours. Jason and I left after work on Monday, got to our hotel at around 930 then went around the block to eat and came back to our hotel room and passed out. Morning came too soon, but it was definitely welcomed. We showered, got ready, and headed across the street to grab coffee and then hang out in the hotel lobby until our driver called us. 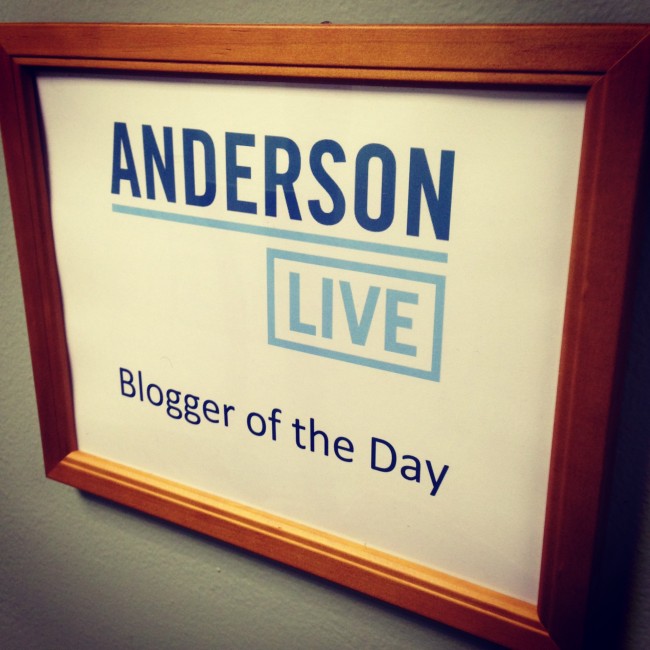 A quick drive to the studio and as soon as we arrived outside the CBS production studios, we were both whisked away upstairs and put into our own green room. As I was walking in the corridor of green rooms, I saw signs for “Patrick Duffy” and “Linda Gray.” I snuck a peek but they weren’t in there. Darn! They were probably getting their hair and makeup done. Anyway, so Jason and I hung out in the green room for a bit and then a guy named Chris came by and mic’d me up and had me count to 10. That was pretty cool. I was then taken to hair and makeup. The makeup artist who did my makeup was really funny and he basically just did a touch-up. Added some concealer, gave me rosy cheeks and lip gloss. The hair stylist just sprayed the top of my head with hairspray, haha

I was taken back to the green room and then the assistant producer who I had been chatting with came by to talk to us and had me sign a blogger release form and all that fancy paperwork stuff. After about 10 more minutes, we were taken down to the studio where this HILARIOUS woman was warming up the audience and giving directions on what everyone should do and shouldn’t do, etc. 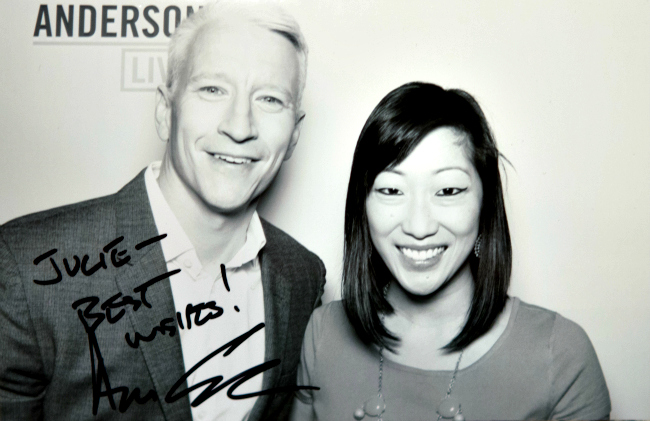 Just a FYI – the studio was FREEZING. It felt like it was 30 degrees in there. My hands were frozen so it was kind of hard to tweet at times, really!

Anyway, so the lady who was warming up the audience saw me and Jason walk in so she introduced me as the blogger of the day and had me explain who I blogged for and where the audience could find me. It was cute because a lady actually came up to me after the show and said, “you have a new follower! I love cooking and looking at recipes!” and I was like, “aww yay! I wish I had a card to give you!” and she said, “I wish you did too!” and Jason saved the day by pulling out one of my business cards that he keeps in his wallet and gave it to the lady. Yay, Jason!

The countdown started and we were going live in 20 seconds! Anderson Cooper and his co-host of the day, Deborah Norville walk out and the audience goes wild. Deborah Norville is SO pretty. She’s a natural beauty. Her and Anderson totally work so well together on set.

They dove into the First 15, which is where they talk about the big headlines or most talked about stuff on the internet for the first 15 minutes. They talked about Anderson losing his iPhone in a cab on Monday and how he doesn’t know how to get “Find My Phone” on his iPhone and how he doesn’t know how to download music on his iPhone. Deborah was pretty much trying to teach Anderson how to use his phone. Then they moved on to this crazy video of a baby being held down by his mother while they were getting the baby TATTOOED. It was kind of disturbing to watch. They were wondering whether or not it was real or a hoax thing like the Catfish stuff online these days. After that, they talked about how Hulk Hogan tweeted a picture of his daughter, Brooke Hogan’s, legs in a sexual way. I guess that’s just how their family is, in a really creepy kind of way. The last story they talked about was the new JonBenet Ramsey revelations. Apparently a newspaper in CO published that the jury actually indicted her parents but the DA said there wasn’t enough evidence to press charges so he dropped it. Guess we’ll see what happens as this story develops! 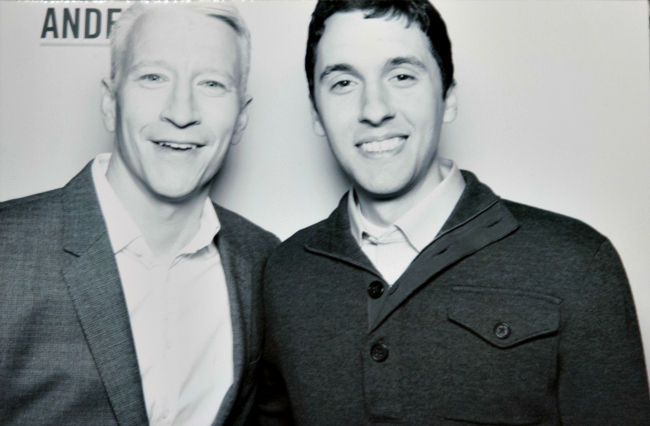 We then went to commercial break and when we came back, Jacob Rudolph, a teen who gave a speech and came out to his entire senior class, was sitting next to Deborah and Anderson. It was really a great story about how he did it and why he wanted to do it. He talked about how he got the courage to do it and all the surprising support that he got from his friends and family. He then mentioned that one person he really looked up to was George Takei and Anderson was asking him whether or not he’s met him before and Deborah mentioned that Jacob actually sent the video to George and then all of a sudden, Anderson goes, well, the reason why you’re on this show today was because George tipped us off and said you should be on this show to share your story and he’s here right now. Total awesome surprise!!

Commercial break and then the stars of Dallas, Patrick Duffy and Linda Gray came out to talk about the recent death of their co-star, Larry Hagman, and how the show “killed him off” very respectfully. Was really cool to hear that they came back to start the next chapter of the show because the script was written “just right” and someone finally got the “voice” of the show correct.

The last commercial break and then Food Network Chef Anne Burrell came out on set and cooked Anderson brussel sprouts! She claimed that she has a fool-proof way of cooking it to make anyone like them. It was really funny watching Anderson trying to peel the leaves of the brussel sprouts apart. Anne said he should be on the show, “Worst Cooks in America.” Anyway, the studio smelled amazing, and Anderson ended up liking the brussel sprouts! Yay!

The show ended and Jason & I were taken to the photo booth to get pictures with Anderson (so cool). I gave him the cookies that I baked for him and his crew. I had two dozen of them in a box that I gave the producer but I held on to two myself because I wanted to personally hand them to Anderson. He seemed to be really excited about them so I was happy. Who knows if he’ll eat them, though :) after the photo booth, he signed my photo and then we were taken to our car and Jason and I went to Chelsea Market for a few hours then we headed to Penn Station to catch our train back to DC.

I had an amazing time on the show and it was so fun!! It’s kind of hard live-tweeting because you’re tweeting what they just said but also trying to listen for what they’re saying so you can tweet that. Definitely not a slow moment at all! Thanks CBS/Anderson Live for having me :) I had a blast! Would definitely do it again!!

Of course, we DVR’d the show so here are some clips that I had to document: 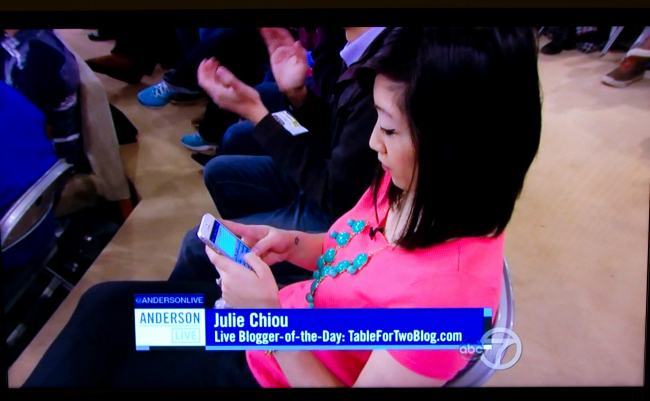 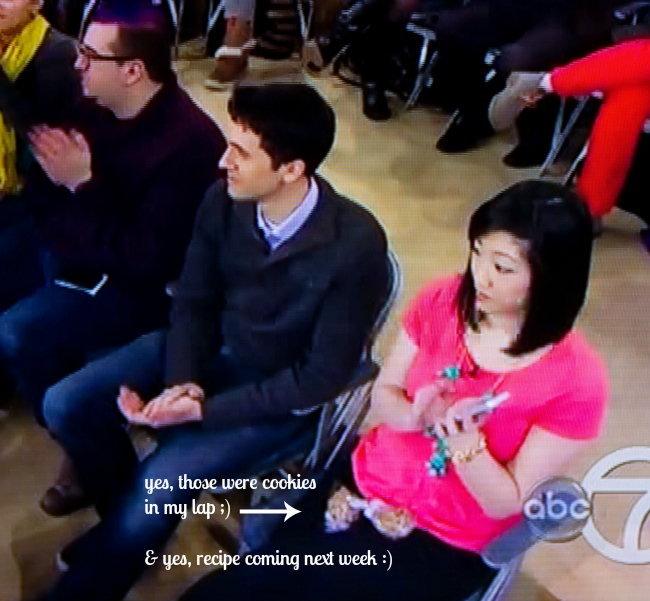 Thanks to all of you: friends, family, readers/fans for texting me, tweeting me, facebooking me, instagramming me all your screenshots of catching me on TV! It makes me so happy to hear that you all went out of your way to DVR this to catch a glimpse of me. Thank you for all the support and love!! xoxo

how awesome, Julie!! I would have been crazy excited to go to that show! oo and Chef Anne Burrell being there, icing on the cake. So cool that you were able to meet Anderson!

Yay! I'm so glad you had this wonderful opportunity and that I was able to see you to chat about it afterwards! xo

It was so SO good to finally meet you. Thank you so much for making the trek out to Chelsea Market to hang out with us for a bit :) if you're ever in DC, let me know! When I make it back to NYC, we will definitely hang out and eat longer :)

Soo fun! I wish I had cable so I could have watched it! Im super excited for you though! Congrats on it :D

Go you! I love how you were keeping it real with the snacks on your lap :)