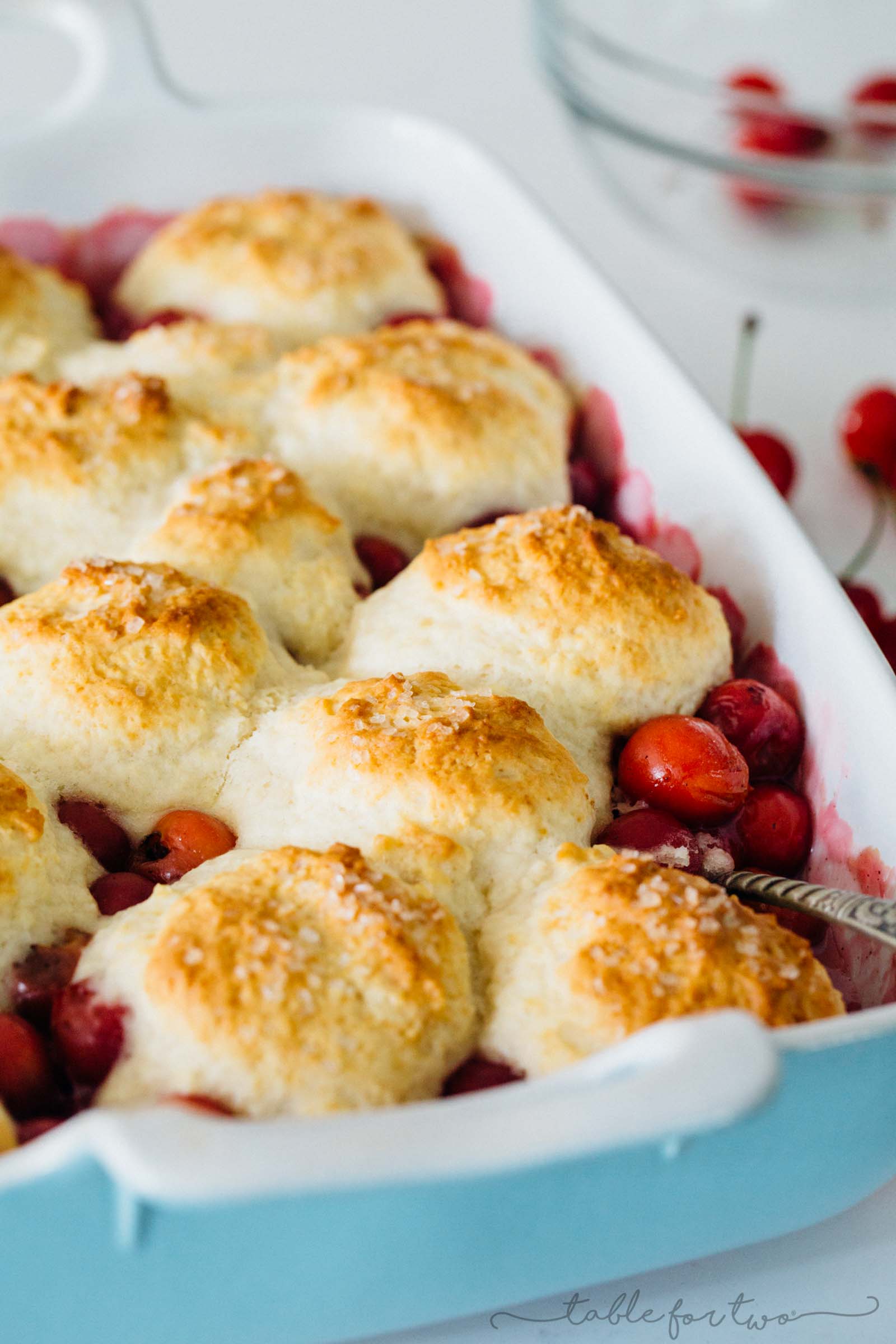 I spotted a whole ton of sour cherries at the farmers market a few weeks ago and they stuck out like a sore thumb in my mind. I couldn’t stop thinking about them but even with that, I didn’t buy them!!! I came home, told Jason about them, and he was like, “that’s what Grandma Wampler used when she made cherry pie! They’re like gold.” Back to the farmers market I went to buy two giant overflowing quarts of them.

What I didn’t realize was they still have pits in them. And we (haha more like Jason) had to pit these individually.

Can I let you know that this is the moment where I thanked the heavens I had my OXO cherry pitter? This is totally not sponsored but without that gadget, I think we would have been cursing at each other and our marriage really would have been tested ? 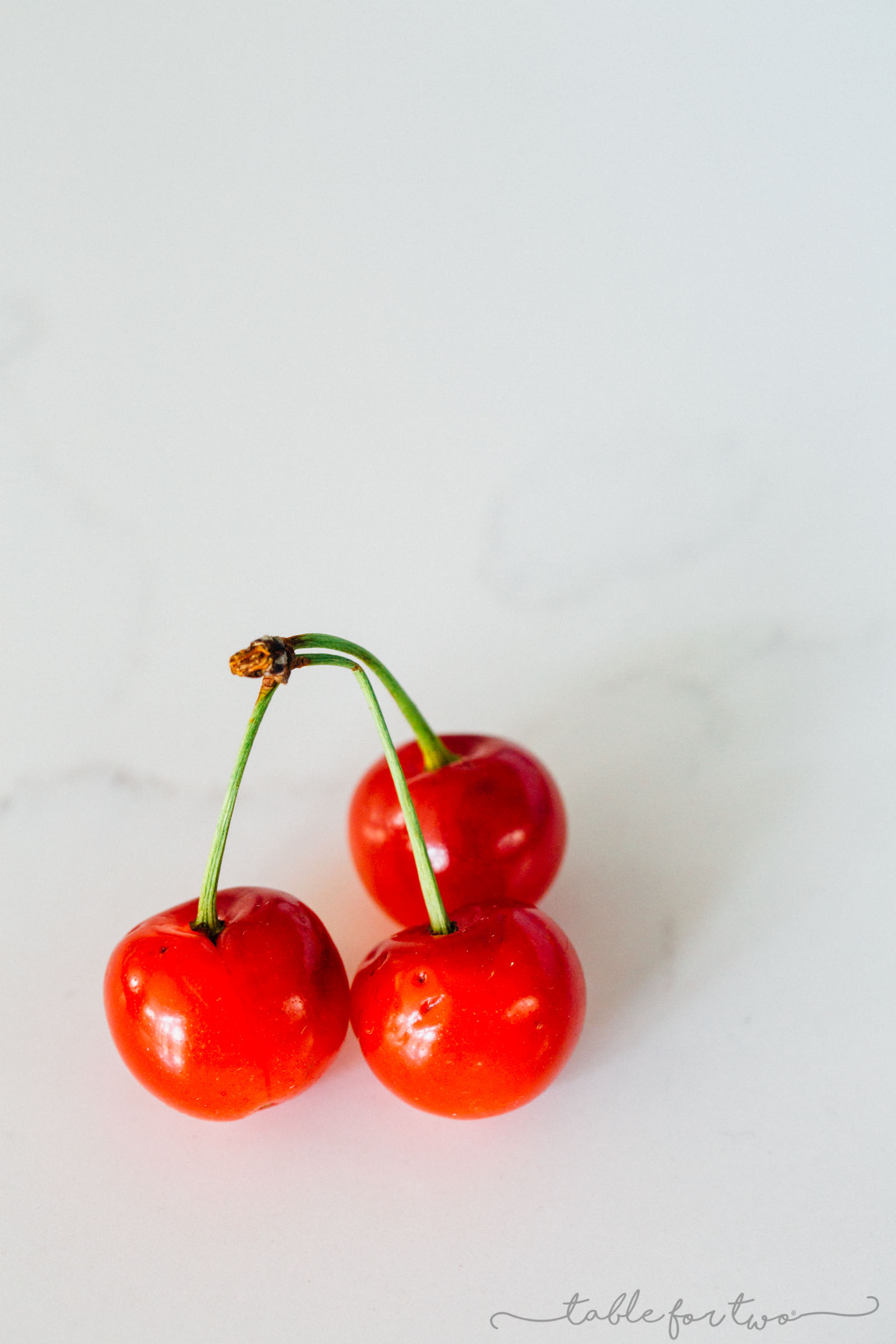 These sour cherries were definitely worth the time to pit them. They make the most delicious sour cherry cobbler!

At first I wanted to make a pie but I so don’t like dealing with crust or dough of any kind. I was hoping this local pie shop down the street would just sell me their pie dough for $6 or something but they refused. I think it could be good business if they sold their dough. I don’t think many people like making pies so they would still buy pies from them but the occasional home cook (like myself) who would want to make pie with fresh, seasonal fruit would buy dough from them. It’d be another source of income but alas, since they didn’t want to sell me dough (and what’s funny is, at first they thought I wanted the recipe for their dough and told me it was an old family recipe) so I decided to make a classic sour cherry cobbler instead. 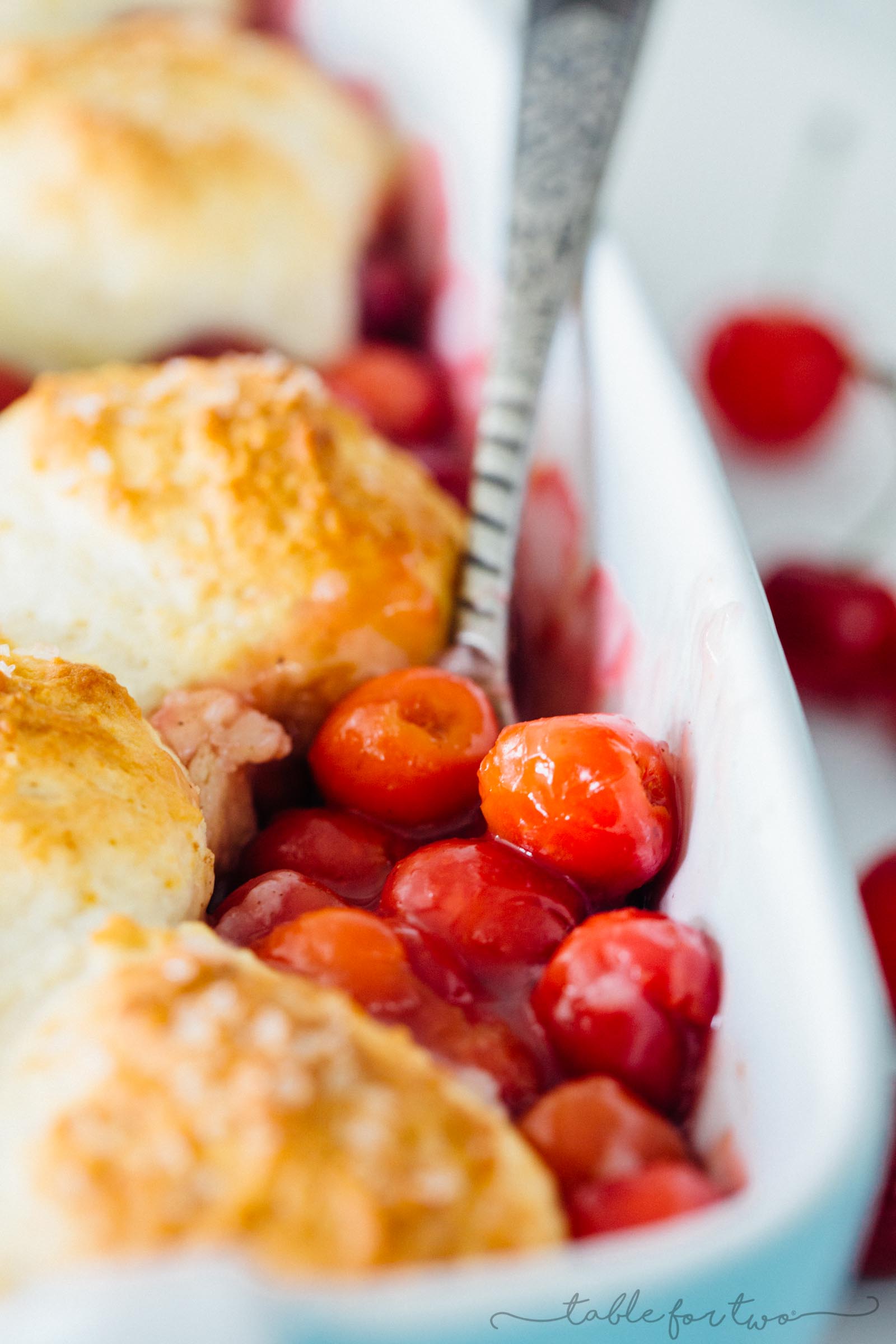 This classic cherry cobbler came out perfectly. It had the right amount of tart and sweetness and the biscuits on top were perfectly crunchy on the outside yet light and airy on the inside.

Since the cherries were rather tart (for my tastes), you HAVE to put a giant scoop of vanilla ice cream on top.

If it weren’t for the cherries being sour then putting vanilla ice cream on top would have made the entire dish way too sugary sweet. However, because of the sour cherries, it made this the perfectly balanced sweet treat. Seriously! Not too sour and not too sweet. It was utter perfection. 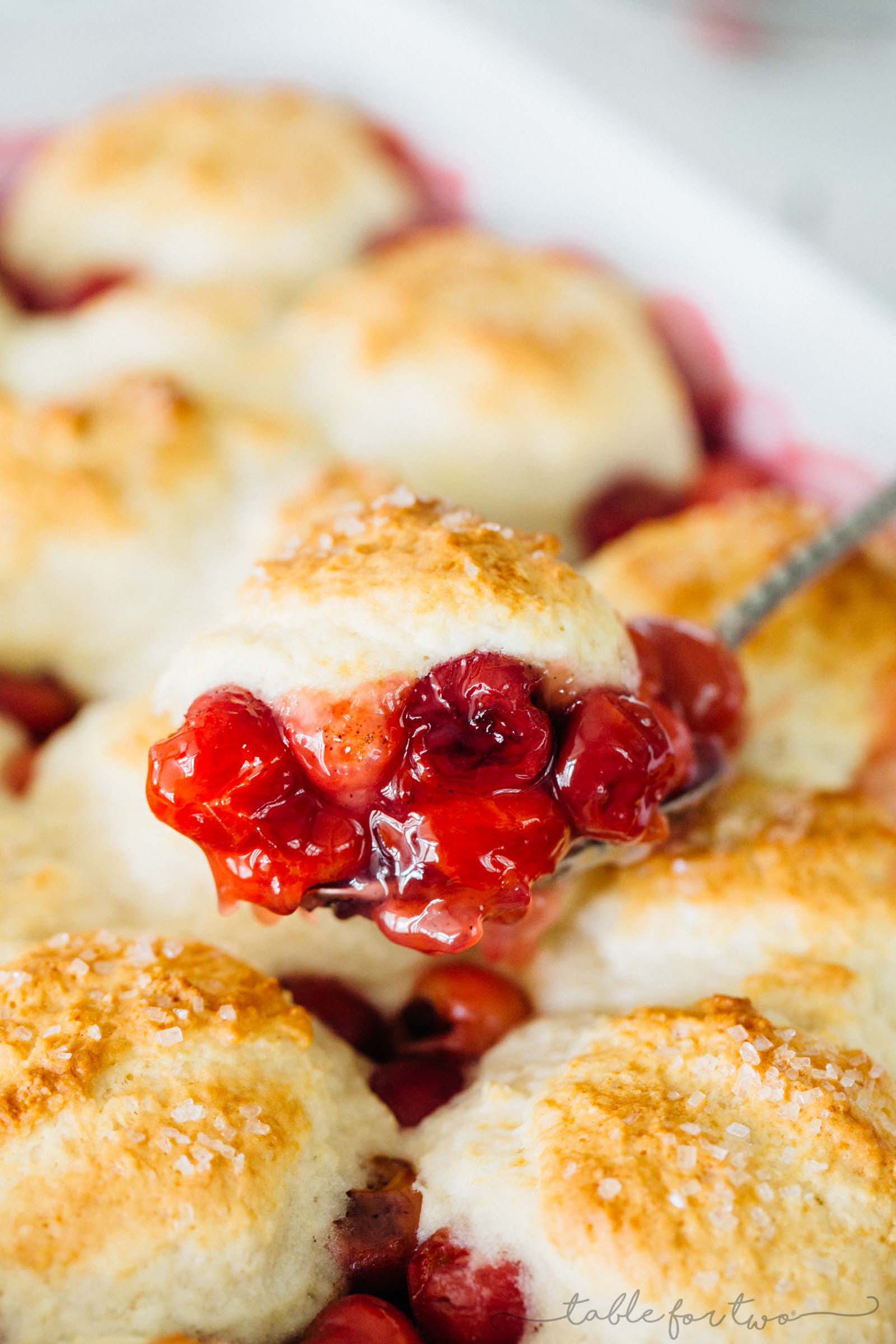 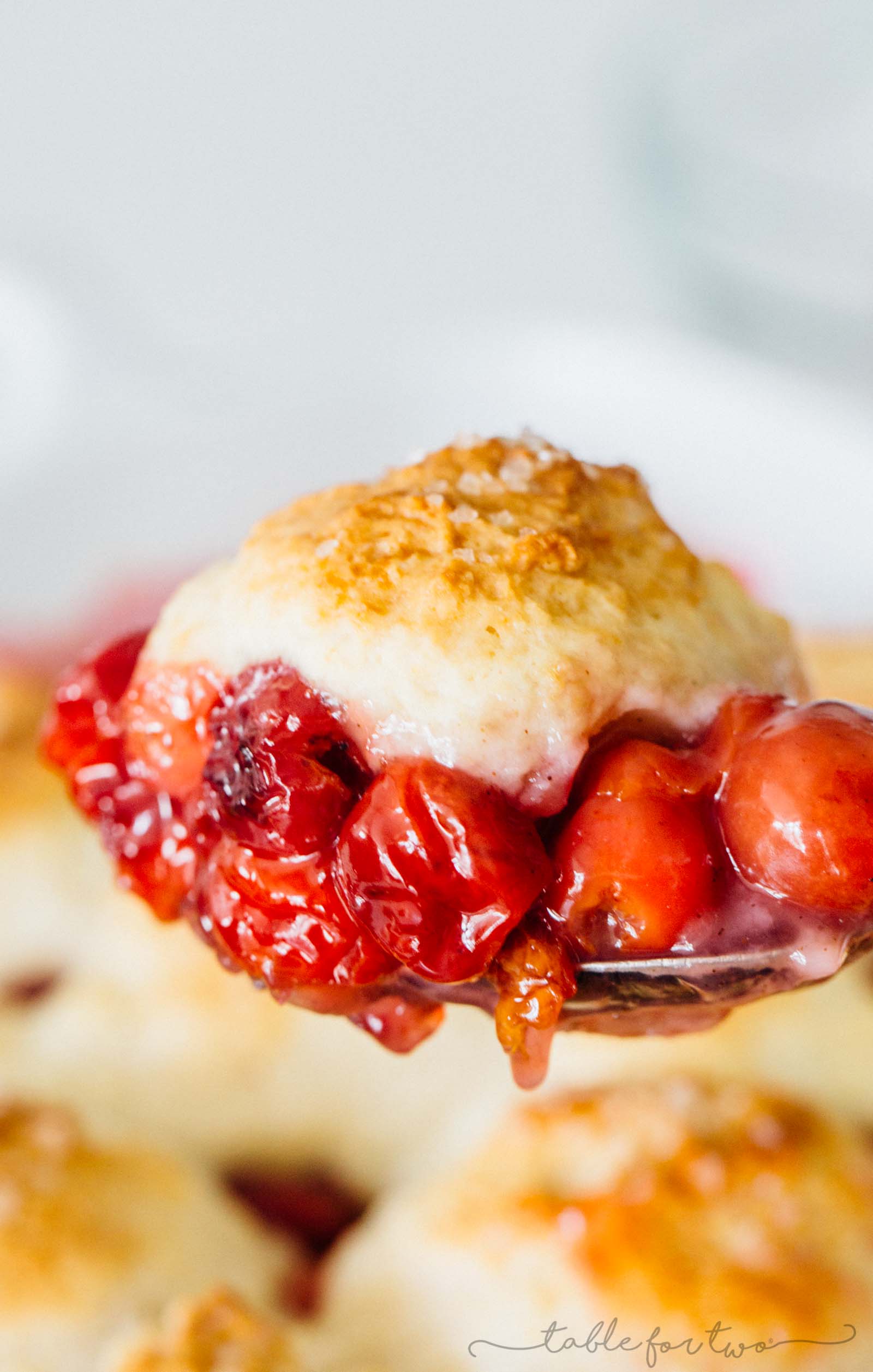 This was so much easier than a pie and you will be so smitten with the results! I implore you to give it a try with all the fresh fruit in season right now! 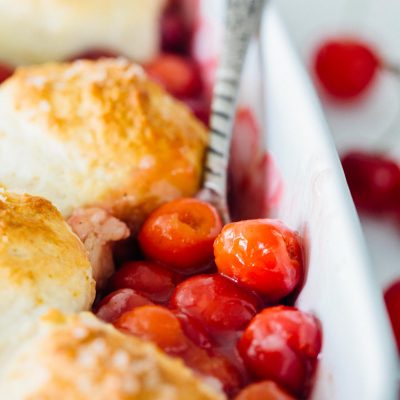 It could not be easier to make a classic sour cherry cobbler right in your own home. Additionally, you could use any seasonal fruit in this recipe and top with a giant scoop of ice cream for the ultimate dessert!
2 from 1 vote
Prep Time: 15 minutes
Cook Time: 40 minutes
Total Time: 55 minutes
Servings: 8
Author: Julie Chiou
Save Saved! Rate Print

To make homemade buttermilk: to 1 cup of milk, add 1 tablespoon of white vinegar. Stir and let sit for 5-10 minutes. The mixture will then be thick and just like buttermilk! Perfect to use in this recipe and just the same as buttermilk you buy in the store. Recipe very gently adapted from America's Test Kitchen

I made this tonight with freshly picked cherries. Unfortunately it was bland and the huge amount of cornstarch made it jello textured. Would not make again, but the biscuit topping was okay ish at least.

Have you tried it with dark chocolate in the biscuit topping? Was thinking about it being too sweet with the ice cream...which is a MUST! Thanks!

no, i haven't tried it with dark chocolate in the biscuit. i don't think it'd be too sweet because the sour cherries are pretty sour! haha