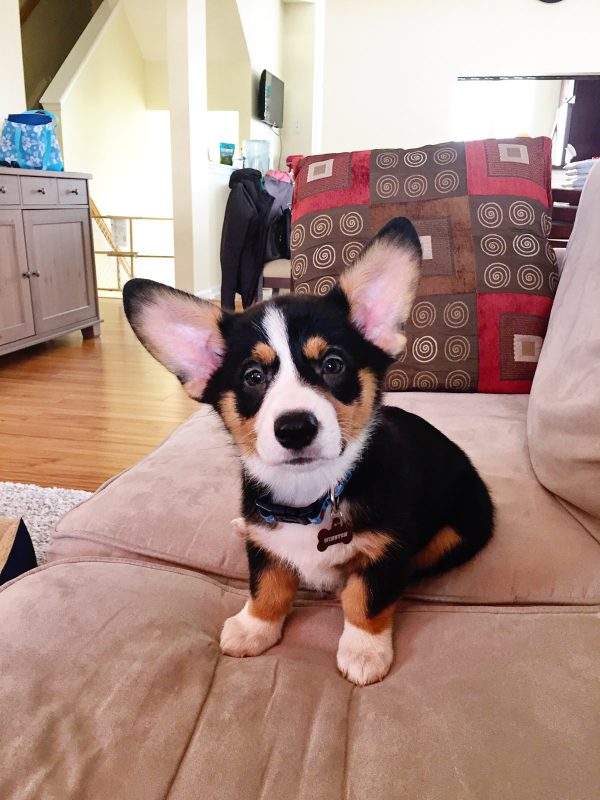 Please say hi to Winston! He’s our newest little furry addition to our family. He is a black tri-head Pembroke Welsh Corgi who was born on August 5, 2015. We’ve had him since mid-October but I haven’t had a moment to sit down and sort through all the photos we’ve taken of him nor have had the time to write this post!

PS – If you love puppies and watching them romp around and doing silly things, you’ll love my Snapchat :) it’s basically all Winston now with food/recipes scattered throughout. 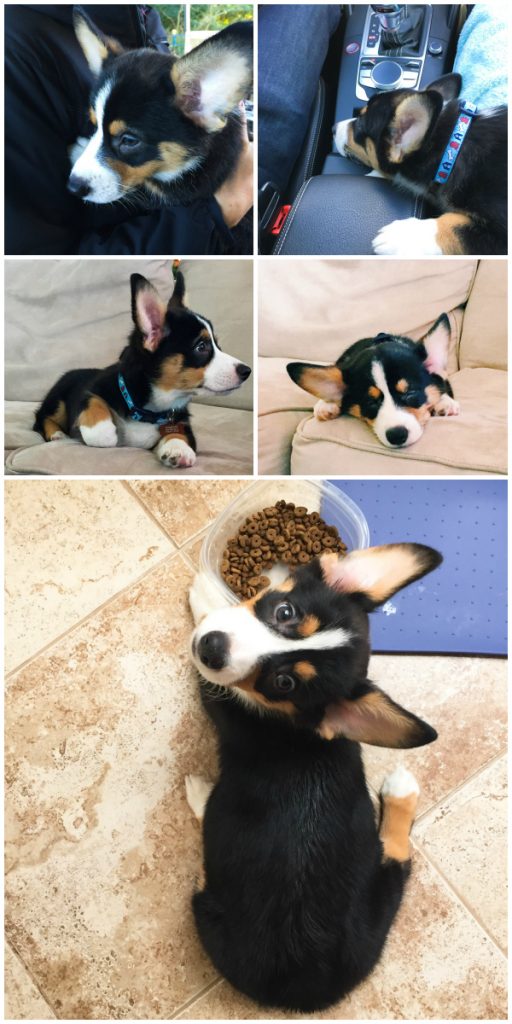 The first two weeks with Winston were by far the hardest. He came home with fleas (that we didn’t know of) so when we took him to the vet the day after we got him, the vet told us this and we literally freaked out. We bought all this stuff as a *just in case* and cleaned the house from top to bottom for three nights straight. It was exhausting. Also, when he first came home, we weren’t doing the crate training right at all. I kept him in my office to hang out with me while I worked but I was on his schedule at that point and I would constantly be taking him outside. When we would put him in his crate, he’d cry and it’d be so sad so we didn’t do it during the day. Anyway, it was just a huge mess and I would be in my office many days just crying because I didn’t know what to do with him and he had all these issues that stemmed from the fleas. THANKFULLY, we finally “got it” and started crate training correctly. We realized he didn’t like his crate and would cry because he could SEE that we weren’t there with him. So finally, we put a blanket over top and covered the entire crate and bam! Miracle. He LOVED it. It’s his safe haven now and he absolutely loves going into it. We finally have a daily routine and Winston knows it by heart!! On the weekends when we are slightly off routine, you can tell he is not happy with it! So we try to stick to routine as much as possible :)

Winston is a real spunky puppy. He’s got a big personality but even bigger heart. He LOVES people and other dogs. We cannot keep him still when he sees those things. His butt literally starts shaking and he gets so excited and starts bouncing up and down. He exudes confidence but isn’t too cocky. He will back down and know his place. He is a bit of a scaredy cat when it comes to new things. Blenders make him run around the house peeing all over and hiding under couches, food processors make him bark and growl, and my DSLR camera with the 100mm lens attached to it makes him go nuts. He’s just a puppy and learning, but it’s just too funny to see how he reacts to things :)

Winston has a ton of energy but he is also really lazy at the same time. When it’s time to get him out of the crate, it can take upwards of at least 20 minutes to get him out. He just doesn’t want to come out! We have to either tempt him with toys or sometimes, as a last resort, we have to use a treat. He just loves his crate and curling up in it! 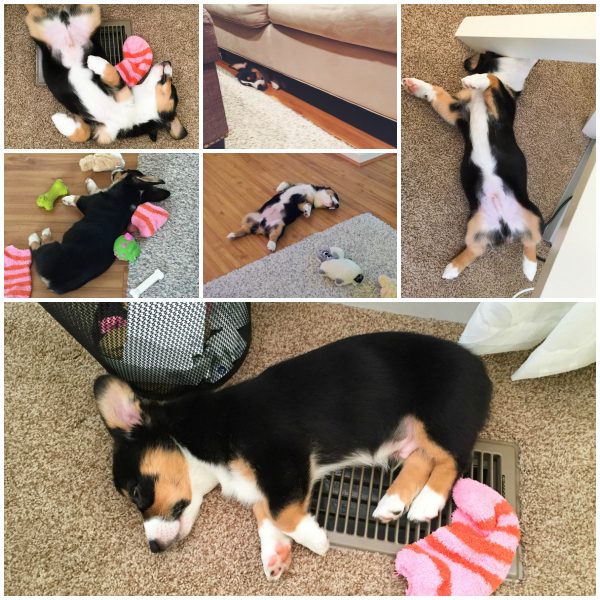 He has the funniest sleeping positions and I love documenting them. When he was younger (like 11-15 weeks), he loved sleeping on his back anywhere and everywhere. Recently, he’s been teething really badly (if you look into his mouth, there are SO MANY teeth coming in and cutting through the gums – poor thing!!) so he can’t really settle down so he doesn’t lie around the living room much anymore. He just wants to chew everything so we sometimes have to crate him to keep him from destroying our furniture! It makes us sad but luckily he is ok with being in his crate :) 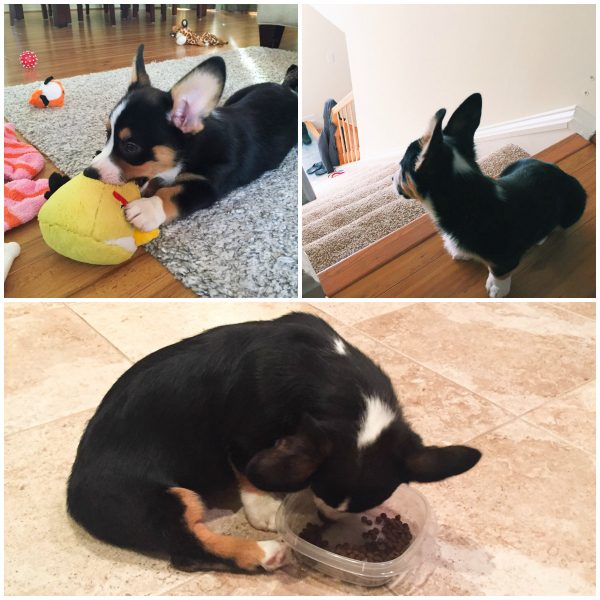 Winston has a TON of toys but funny enough, we have only bought him two of his 20-some toys. My good friend, Amanda, and her husband moved to San Francisco and when they were decluttering, they found all these toys that their dog never played with so they passed it on to us. They’re some of Winston’s favorite toys! His favorite ones are this stuffed Angry Bird (the yellow thing you see in the photo above), this log full of squeaky squirrels that my friend Megan got him, a rubber frisbee, this squeaky lamb (we call it his lamby), his squeaky raccoon, and his squeaky rabbit. He loves chewing/gnawing on bully sticks and more recently, he’s taken a liking to his nylabone cause of his teething. Oh, he LOVES tags. We have to cut tags off all his toys because he will chew on them and rip them off. I finally ended up getting him a taggie; you know those baby blanket with tags all around the blanket? Haha, yeah, I totally got him that. 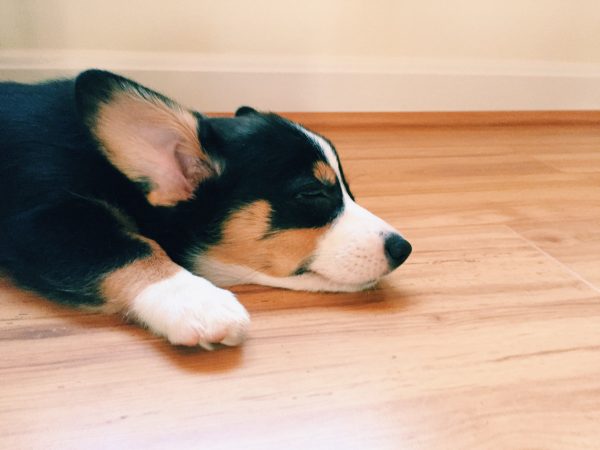 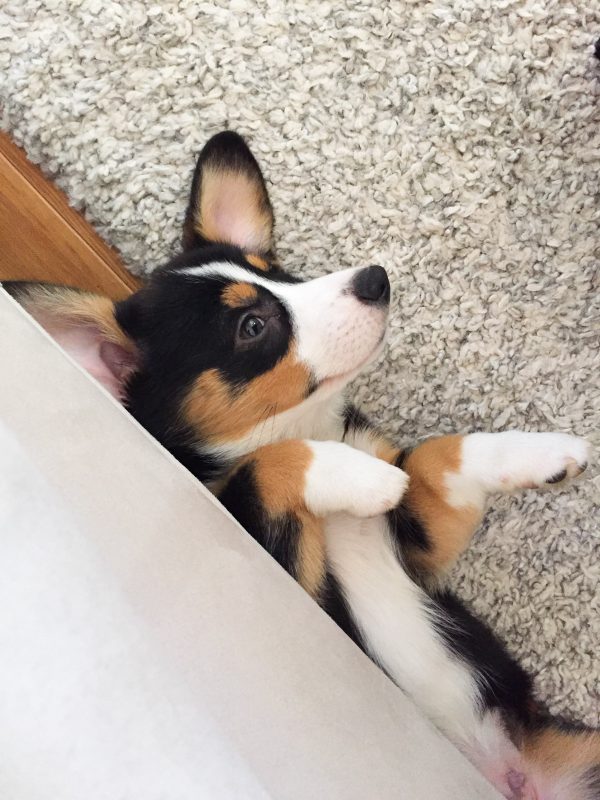 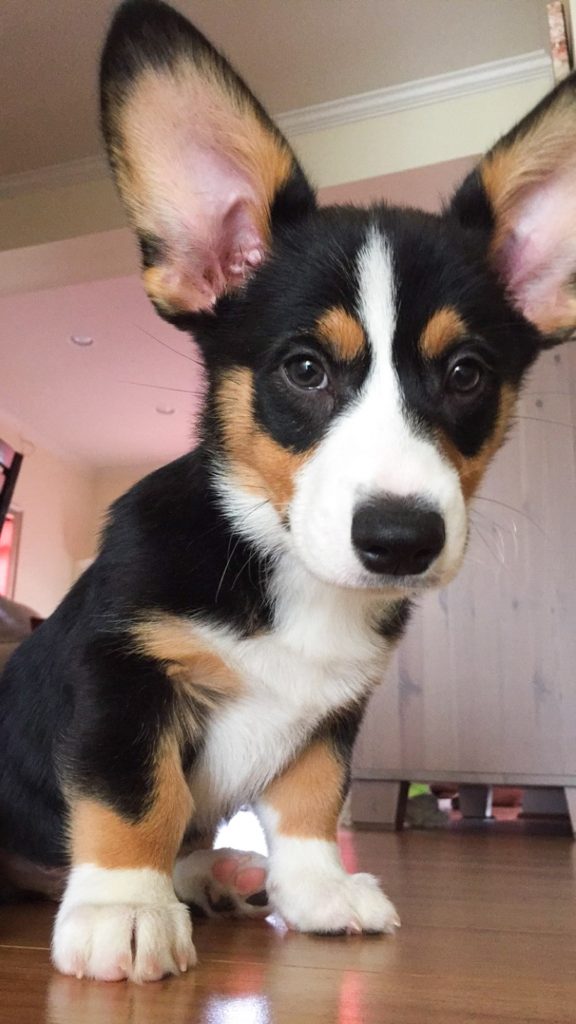 He finally conquered the big scary stairs!! He got the whole ‘going up’ thing pretty fast but going down took him quite a bit! I don’t blame him though, our stairs are pretty steep and all he could see when he looked down was the hard tile so I’m pretty sure that didn’t make him feel too comfortable! Now all he loves to do is go up and down the stairs, haha..I love watching him go down the stairs. He has a cute little bunny butt and it looks like he’s bunny hopping down the stairs. 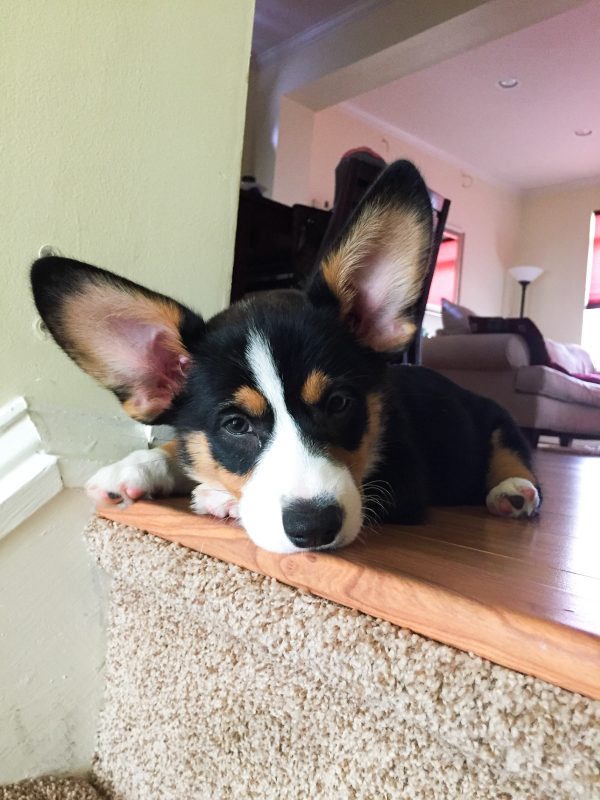 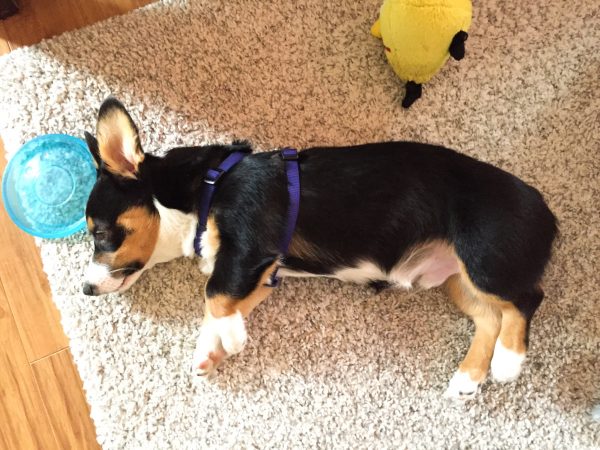 He knows the commands sit, down, stay, and sometimes (when he wants) come. He also knows the word, ‘bye’ and HATES it. He gets super nervous and freaks out whenever we say that because he knows that it means we’re leaving. So we never say it to him only when we are trying to get him out of the crate. We say, “bye Winston!” and walk out of the room and he comes bolting out of his crate. He knows what ‘night night’ means so it’s cute when we put him to bed/in his crate. 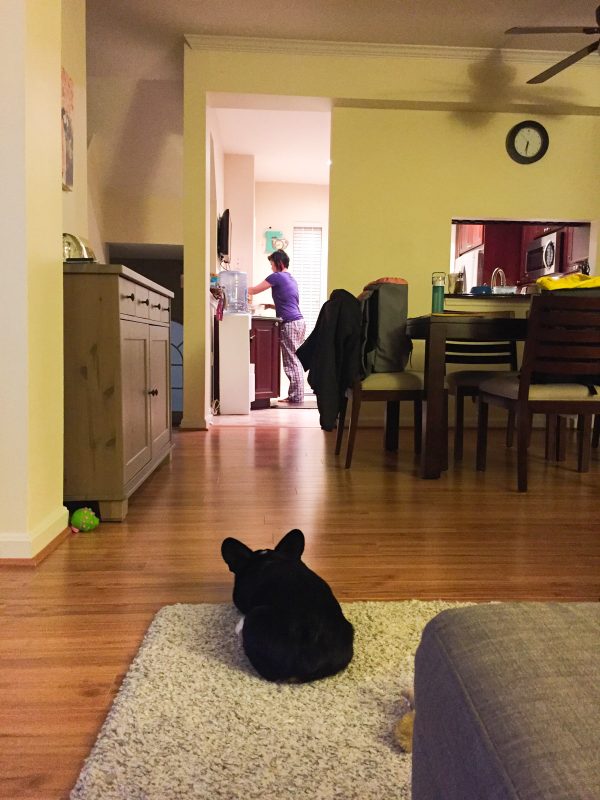 One of his favorite games is  sprinting back and forth on the carpeted hallway upstairs. It is one way to burn his energy. It is hilarious to see him bolt from one end to the other and over and over again. He always gets into crazy energy spurts where he’ll run around the living room creating an obstacle course for himself. It’s seriously the funniest thing to watch. 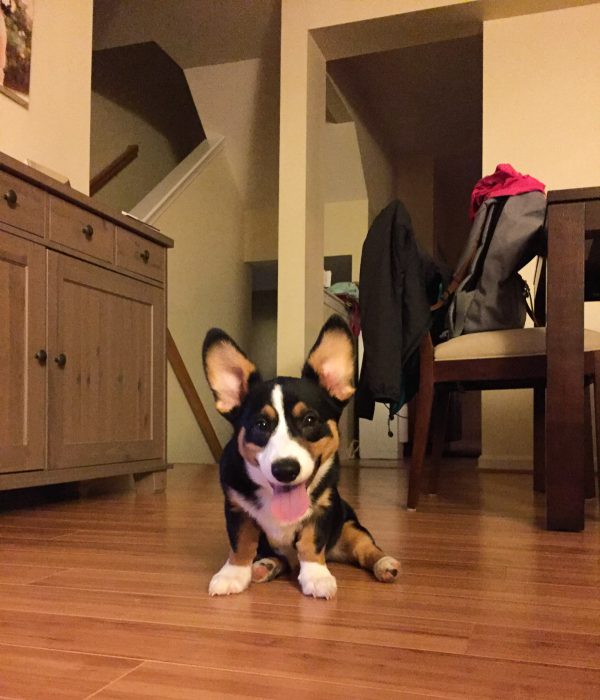 Walks are still challenging because the world is his oyster so he loves stopping every five steps to sniff things. He’s not good on a leash because he pulls (a lot) and we have tried over five different types of collars and harnesses. He hated the Gentle Leader and we got the Gentle Walker but since the leash attachment is on the front of his chest, the leash was right in front of his face so he just chewed on it and didn’t walk. The traditional collar so far is what works for us but when we go on long walks, we put him in a harness because he pulls so much and we don’t want him to choke himself with the traditional collar. We’re hoping he gets better on walks the older he gets and actually just stays by our side and not be the one leading our walks! 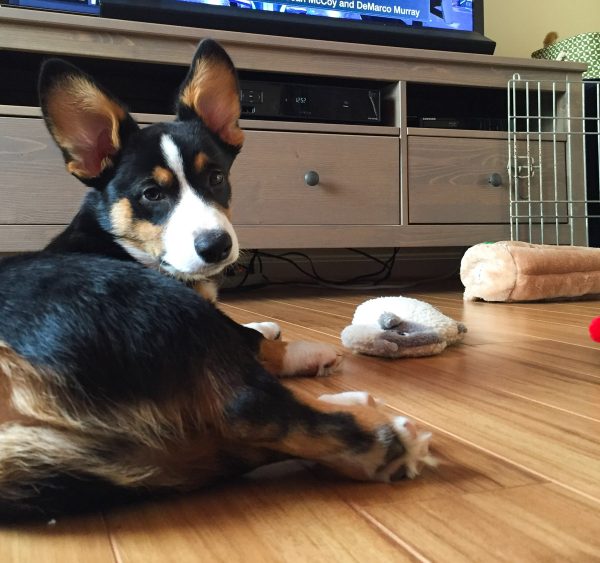 We took Winston to an 11-week puppy kindergarten class. While we learned some good tips and tricks on how to train him, we actually already knew a lot of what they were teaching so we didn’t feel like we got a lot out of the class. But he did graduate so that’s good ;) 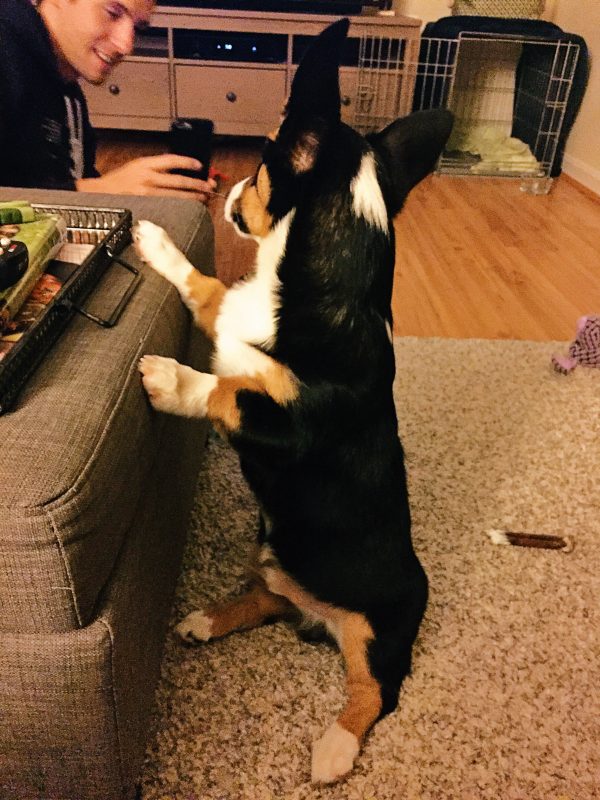 Grooming-wise, he seems fine with everything. We just have to treat him when we clip his nails. I’ll trim while Jason gives him string cheese :) we haven’t really had to use the furminator much on him since his adult coat is just now coming in. He doesn’t hate baths but he doesn’t love them. He just tolerates it :) he doesn’t mind having his ears cleaned either. 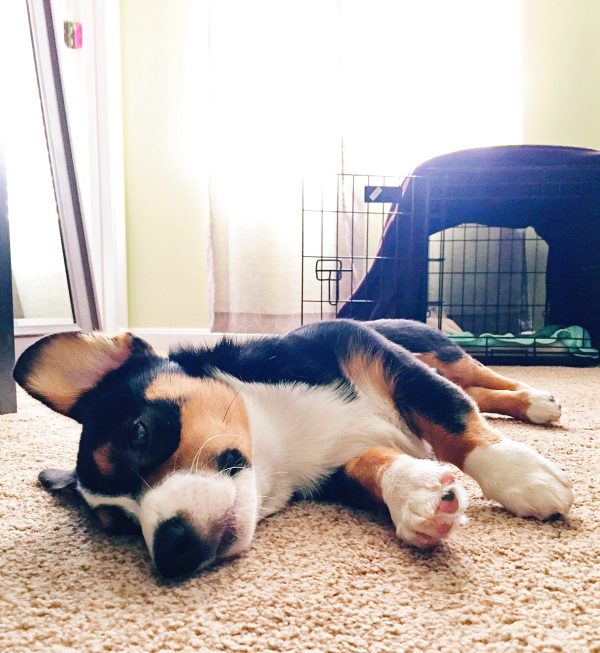 He turns 6 months in February and the little guy will need to get surgery to get rid of those balls :( he is going to HATE the cone of shame! I’m prepared to lose sleep at night because he’ll probably be crying in his crate cause he can’t turn around or something due to the cone. Amanda did give us a soft e-cone so hopefully that’ll be more comfy.

When we got Winston, he was 8 pounds and now, he’s doubled in weight at 16 pounds! He’s gotten a lot longer too and his paws have gotten bigger and he’s gotten a little taller in height but not by much :) he’s gotten all his needed vaccines and he is registered with our county now! He’s officially a dog! 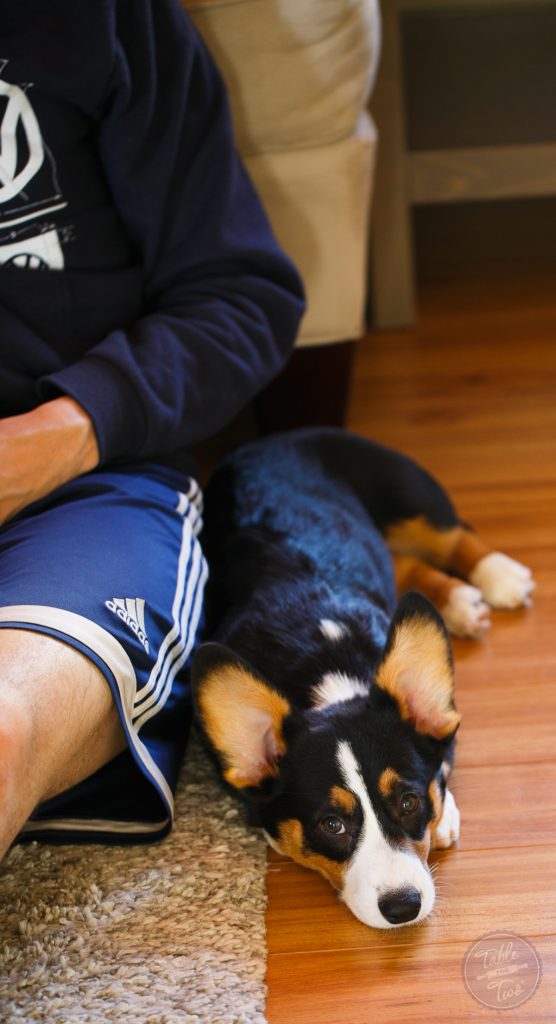 Phew, that was the past two months with our little guy, for ya! We love him so much and though he has his moments, there is no way I can now imagine our lives without him! I’m officially a dog lover and a dog mom :)

What Corgi puppy fun. We had a red welch corgi twenty years ago and he was THE most amazing dog. He wiped his feet on the mat before coming in. He would herd all the kids pool toys, jumping in and pulling one toy out at a time until the pool was empty of toys. He also herded the bubbles in the jaccuzzi.. He would run around and around mouthing the bubbles, trying to catch them. We lost our little buddy when he passed on. But have such amazing memories.

Awww that is so sweet!!! I'm so sorry about your loss but his memories clearly live on!! xoxo

he is SO cute, Julie!! congratulations on your new little addition!

I hear you about adolescence. We have some VERY frustrating moments with Meelo! As cute and as fun as puppies are they can definitely be frustrating. Our little guy has so much sass that he back talks if he doesn't like what you're telling him to do! He also has figured out our morning schedule (when I have to leave) so then he wants to play chase so he doesn't have to go to his pen. Which isn't ideal when I'm running late for work.. Haha.

I'm hoping the surgery goes well for him! He's definitely got a couple extras but I'm sure he will do great! Lots of treats and pets and cuddles and he will bounce right back!