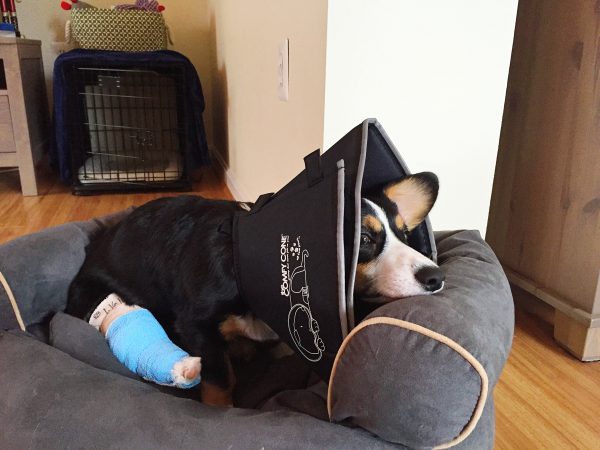 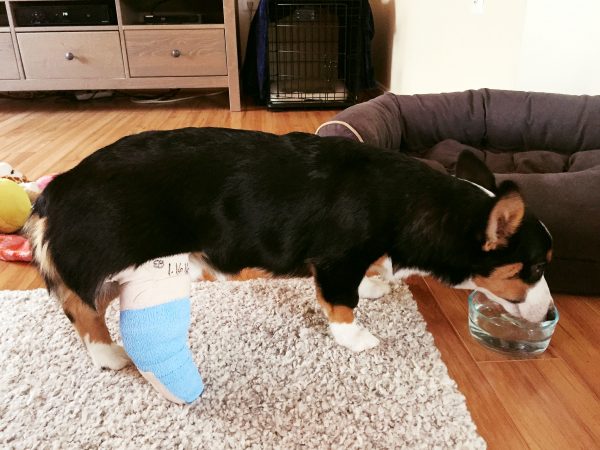 It was the same routine that we’ve been doing every single night since we brought him home. Right before bedtime, he’s usually so exhausted that he doesn’t want to go down the stairs himself so Jason usually carries him to go out for one last spritz before going in his crate for bedtime. However, this past Friday didn’t go as planned.

As Jason was going down the stairs holding him, he slipped on a stair and they both fell together. Since Jason was holding Winston under his arms and fell, Winston’s hind right leg hit the stairs as they both went down. The yelping that ensued was the most terrifying and saddest thing I’ve ever heard. I don’t think I’ll be able to get it out of my head. Poor little guy ended up peeing all over the floor (probably due to the shock and pain). I picked him up and cradled him. You could see tears near his eyes. Seriously, the saddest thing ever. He stopped crying as soon as I picked him up and cradled him. We tried to put him back down on the ground to see if maybe it was just the shock that was making him yelp, but no, he wouldn’t stand up at all and just cried so we knew something was wrong and immediately picked him up again and headed for the emergency vet. 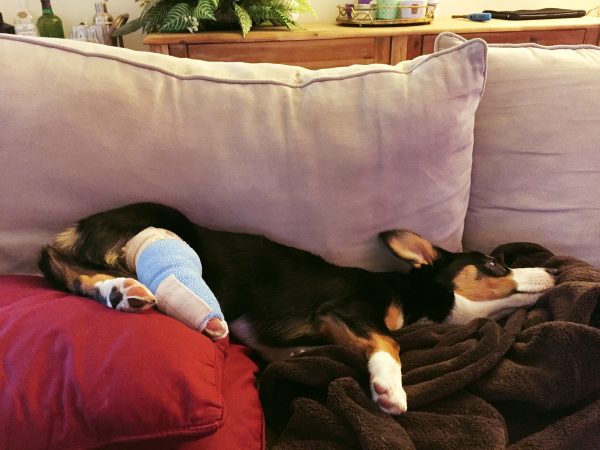 Three and a half hours later and $600 poorer, it was confirmed he had fractured his fibula and was going to be in a splint for a week. How I wish it were actually that easy, but with Winston, there are no breaks to be had because the vet also told us that he wanted to send out his x-rays to a radiologist because he thinks that the fall might’ve fractured/affected a growth plate in his tibia.

We were praying and keeping every finger and toe crossed that that wasn’t the case because that would mean surgery to repair it. If you don’t, it would affect his leg as he grew.

Sadly, on Saturday evening, we found out that the fall did in fact fracture his growth plate (Type III Salter-Harris fracture) and we were urged to see an orthopedic surgeon immediately and to get surgery ASAP before it healed too much. 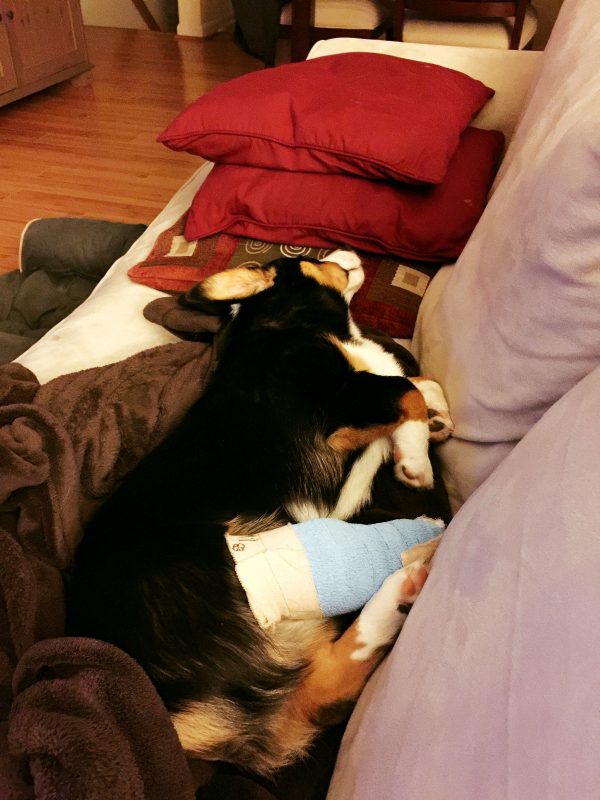 Of course all of this would happen on a weekend so we had to dreadfully wait until Monday morning to call the orthopedic surgeon. We were able to get a consultation on Tuesday morning and it was confirmed, yet again, that we would have to do immediate surgery on him. We were prepared over the phone on Monday that the doctor would maybe do same-day surgery so to prepare ourselves for it. And, well, it was in fact true because on Tuesday morning, we left the office without our little Winston!

Winston went into surgery for about three hours on Tuesday. Everything went really well. The doctor told us that the fracture above his tibia (where the growth plate is) was a little more complex than expected so that’s why surgery took a little longer. They put in cross pins to secure the bones in place so as he grows, his legs won’t bow out. Thankfully, Winston is pretty much done growing in height so there won’t be a huge difference with his legs. While he was under, we also got him neutered. And of course, with Winston, he didn’t make that easy either. He’s cryptorchid meaning he had one undescended testicle. Prior to this accident, we had met with our vet and we jointly agreed that we’d just wait on his neutering surgery because there was a chance his other testicle could drop. Well, because of this accident, we decided to just kill two birds with one stone. Why put him under twice in less than two months? So not only did he have leg surgery, he also lost his manhood ? 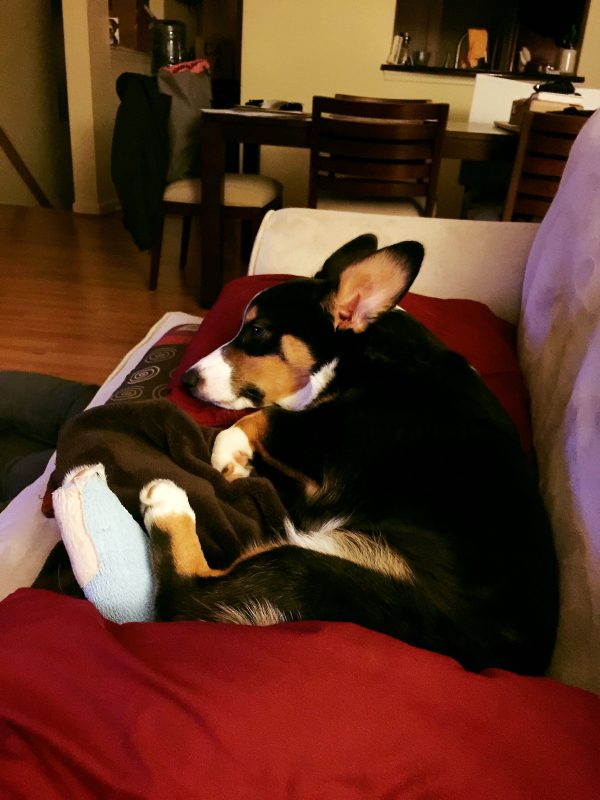 Thankfully, the long-term prognosis for Winston is great. He should be just fine! There’s always a chance when messing with a joint that he could have an earlier onset of arthritis but the fact that we got him fixed now will give him a greater chance of a pain-free life!

Recovery is 6-8 weeks but he’ll be on a splint for 1 week and then he can walk on it, gently (no running or long walks), after that! The reason is, they don’t want his joints to stiffen up so they want him to start using it and getting his range of motion back ASAP! All his incisions have the stitches that are inside him so they just absorb into the body. There won’t be anything he can potentially pick at with his teeth…he’ll likely want to lick his incisions so that’s where the cone of shame comes in! He doesn’t really mind his e-collar though. I mean, he tolerates it, but since we got him the soft e-collar, he uses it like a pillow :) 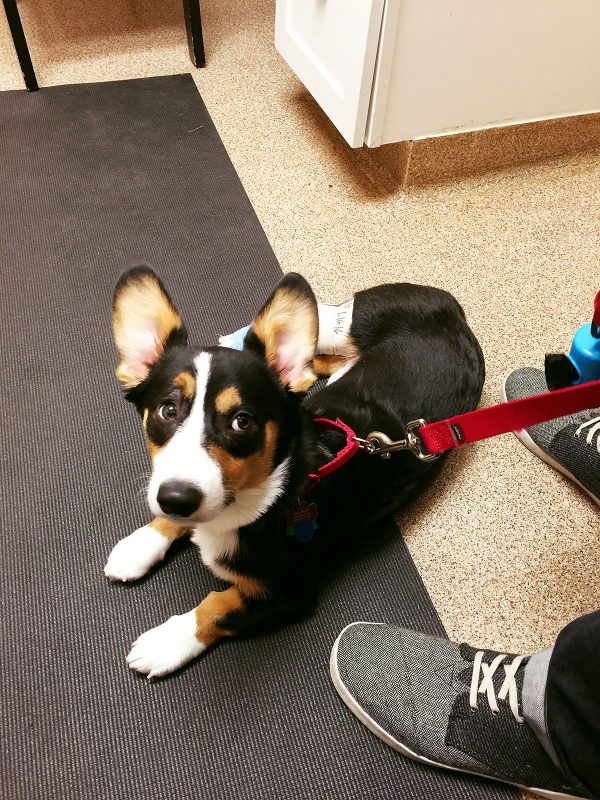 We get to pick him up around noon today and we couldn’t be more excited (and nervous)! Can’t wait to snuggle his cute little puppy face. He’ll probably be too dopey to know what’s going on but hopefully he’ll recovery quickly! We have a huge snowstorm headed our way on Friday and Saturday (re: projected two feet of snow…this entire area will be shut down haha) so that’ll be interesting trying to take him out to go to the bathroom. Jason will just have to shovel around the clock.

Hopefully my next Winston update will be more positive and will be about how he’s recovering and just being a puppy! This accident and surgery definitely threw us for a loop (and subsequently made us $5000 poorer, haha) but we would never trade Winston for anything!

My little Buddha subluxed his patellar and had surgery. The casted part was easy - the 6-8 weeks of "limited activity" is the hard part. Buddha sends little nudges and postive energy for a quick rehab.

I'm so nervous about the limited activity...Winston is too hyper for that haha..thank you!!

I hope he feels better soon. He has such a cute little face!

Oh no! Poor little guy! That cast is nearly as tall as he is! Here's hoping for a speedy recovery!

I know! His short little stumpy legs, hehe - thank you!!

I must admit seeing him on your snap, looking all sad made me cry. I had to go home and cuddle Gizmo. He was so excited to see me that I ended up peed on. Get well soon Winston. May you have a fast recovery. I hope Jason is OK too.

Awww! <3 I know, I've shed a bunch of tears for him. Thank you for your sweet words and thoughts. Say hi to little Gizmo for me :) Jason is fine! xoxoxo

oh the poor dear. How traumatic. We've been through these sorts of traumas with our dogs in the past too. Hoping he heals perfectly.

It's so scary and sad! Thank you so much!