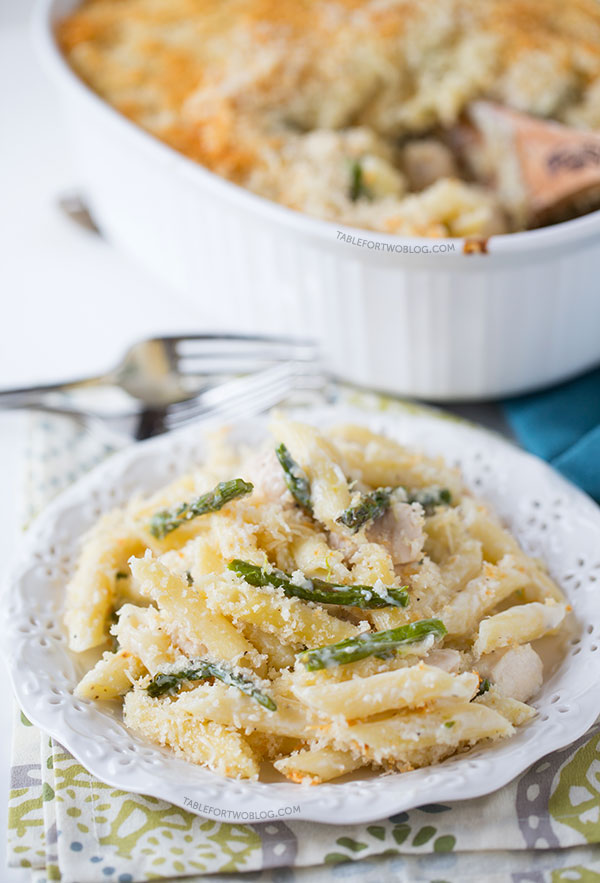 Today is the last day of March. Besides the fact that we’re about to be 1/4 of the way through 2014 and it feels as if it just began yesterday, we got SNOW yesterday. SNOW. Like the cold, white stuff that falls from the sky in the WINTER. Last time I checked, we were well into Spring. I know, you have such little sympathy for me :P

On another note, I bought a Kindle. Yup, I did it. It just seemed like the best investment. I went back and forth with the whole Nook, iPad mini, and Kindle dealio but I only wanted a device strictly for reading and no interruptions so iPad mini was definitely out of the picture so then Nook vs. Kindle. Well, I already am a devoted Amazon Prime member and B&N doesn’t seem like they’re doing too well sooo Kindle it was! Plus, 85% of you vouched for a Kindle Paperwhite. Oh, the best part was that it was on sale for $20 off at Best Buy so win-win all-around! And with that new purchase, I finished the Divergent series with Allegiant and basically bawled my eyes out in my office. I don’t understand why everyone thought that was a bad book or that it had a bad ending. I thought it was wonderful!

Do you get super attached to characters in books that you read (especially trilogies for me) that after you finish the series, you feel kinda empty inside? I wasn’t exactly bawling because of the ending or the events, but moreso for the fact that an amazing series has ended and now I have to find something else to replace it and I don’t want to because I loved the characters so much. Yeah, I’m totally crazy, aren’t I? I told myself I can’t read another dystopian trilogy for a while. I need time to mourn the end of the Divergent series (see? I’m totally crazy). I tried to find a happy/chick-lit book but all the ones I want to read, I’m saving for the plane ride, so I think I’m going to go all dark and suspenseful and read Gone Girl. I bought it last year and never started it because of SO many people saying how horribly it ended. I hate bad endings and I hate when there’s no closure so it kind of shyed me away from reading it. I heard that the author (Gillian Flynn) is re-writing the ending for the movie that’s coming out later this year because of how controversial it was. So anyway, I’ve started it and so far, it’s pretty engrossing. Like, I can’t put it down. I foresee myself finishing it this week, for sure. Have you read it? Thoughts? 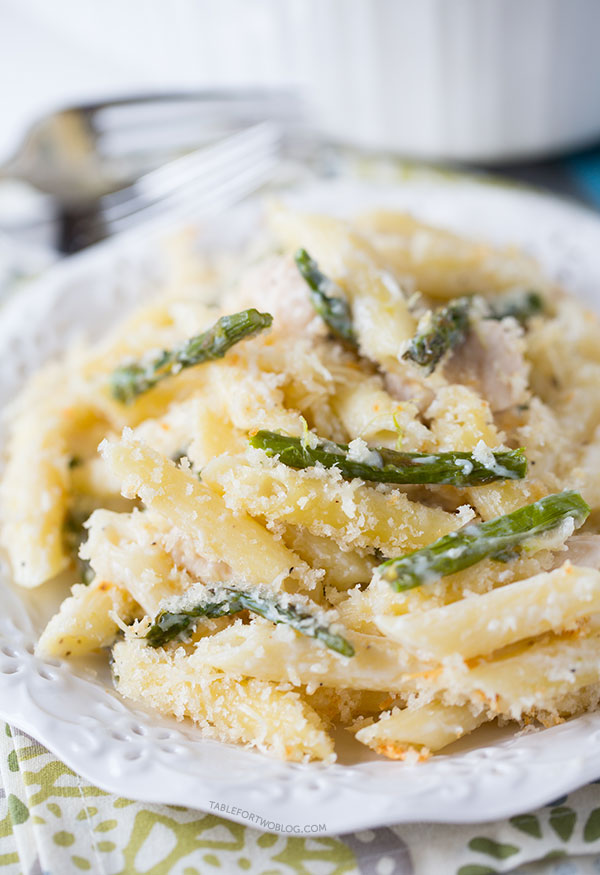 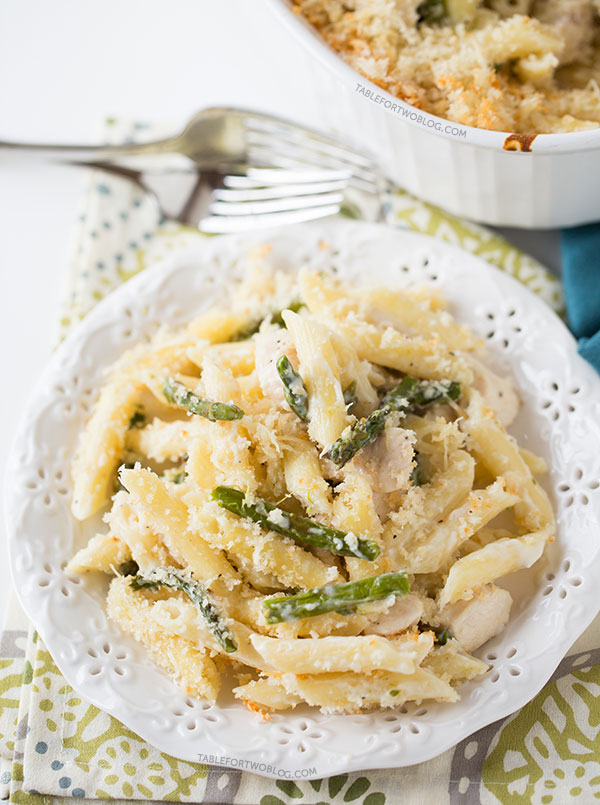 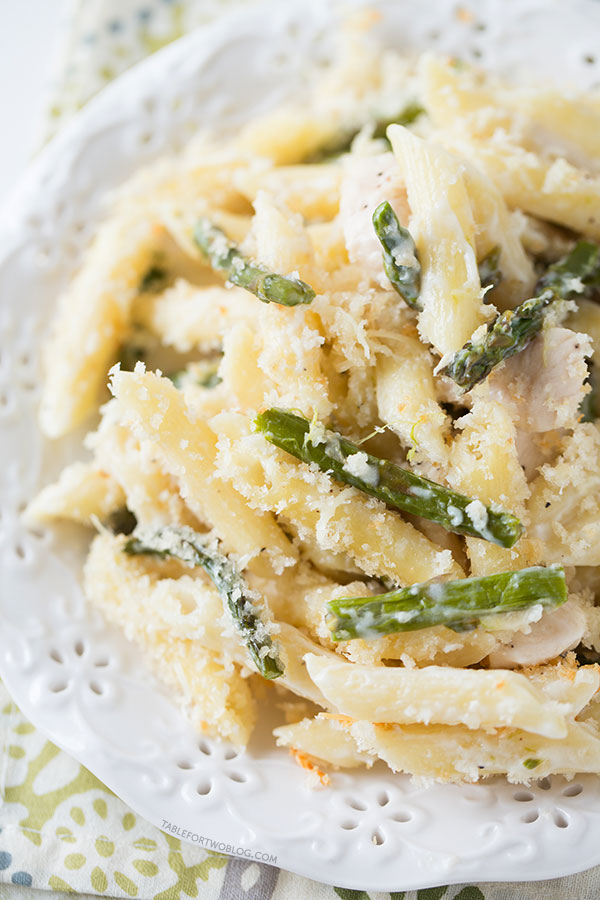 Alright so, despite weather woes, it’s asparagus season! What better than to roast them and throw them into a creamy penne casserole bake? This could totally be a vegetarian dish but I figured Jason would appreciate a bit of protein so I threw in some cubed chicken breasts but you can certainly omit it. I really like panko and Parmesan so I generously covered the top of the casserole with way too much but it was nice to have it dispersed throughout each bite of this dish. Haha, it did make it annoying, though, to scoop out the pasta. The panko went everywhere since it was such a heaping amount! Just don’t go as crazy as I did ;)

Anyway, grab the recipe below for this very Spring-y dish! Easy to put together and it makes a lot so you’ll have some delicious leftovers to look forward to! 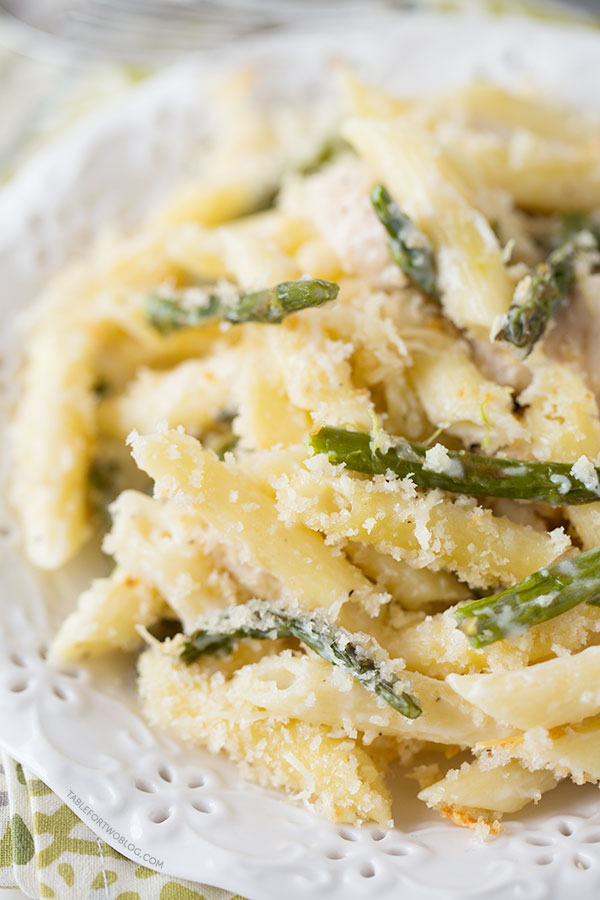 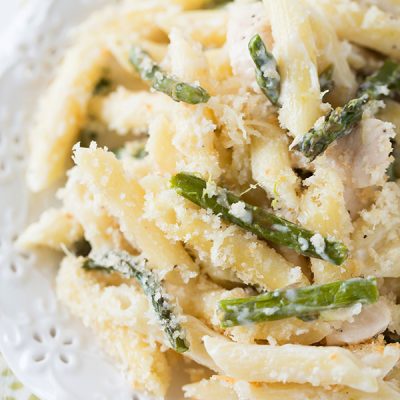 This is an excellent recipe, thanks

What a tasty looking dish! Definitely want to try this!

Sounds and looks absolutely delicious. I think I'll make this for dinner tonight!

I read your little opening article & find it ironic how it's 7 months later & now the cool weather has now started kicking in & you were waiting for it to end when you posted this recipe. This recipe showed up on my Pinterest page. It looks delicious! I'm definitely going to try it! Just curious what you thought of the Gone Girl book ending? I too was pissed & left hanging! Ironically the movie opens this Fri. I will see it, because I heard the author definitely changed the ending for the movie. Looking forward to it!

Wow, that's crazy this was 7 months ago. It totally didn't feel like it!! I hated the Gone Girl ending - hated it! I can't wait to see the movie - I heard it was really good and the ending was slightly different but it worked a lot better!