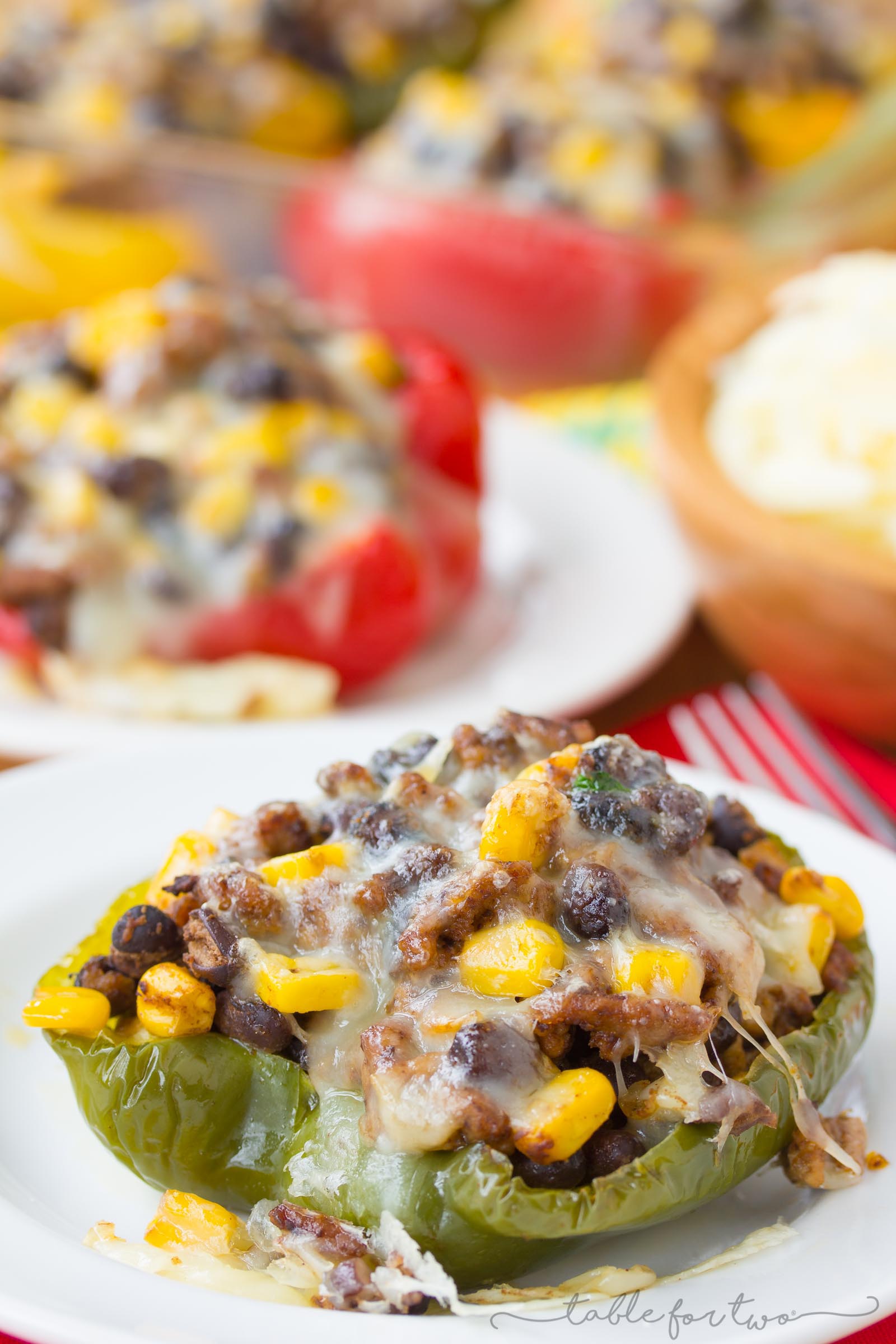 Stuffed peppers are so versatile.

It’s one of those meals where it’s all in one.

You have everything stuffed into a pepper.

Although, if you don’t like bell peppers, it’s probably not for you.

Funny thing is, Jason isn’t a fan of big hunks of raw bell peppers but he’s totally fine with these stuffed peppers.

I think it’s because when you cook them down, they get somewhat sweeter and they aren’t as pungent.

I know bell peppers have that distinct flavor and some people don’t really like that. 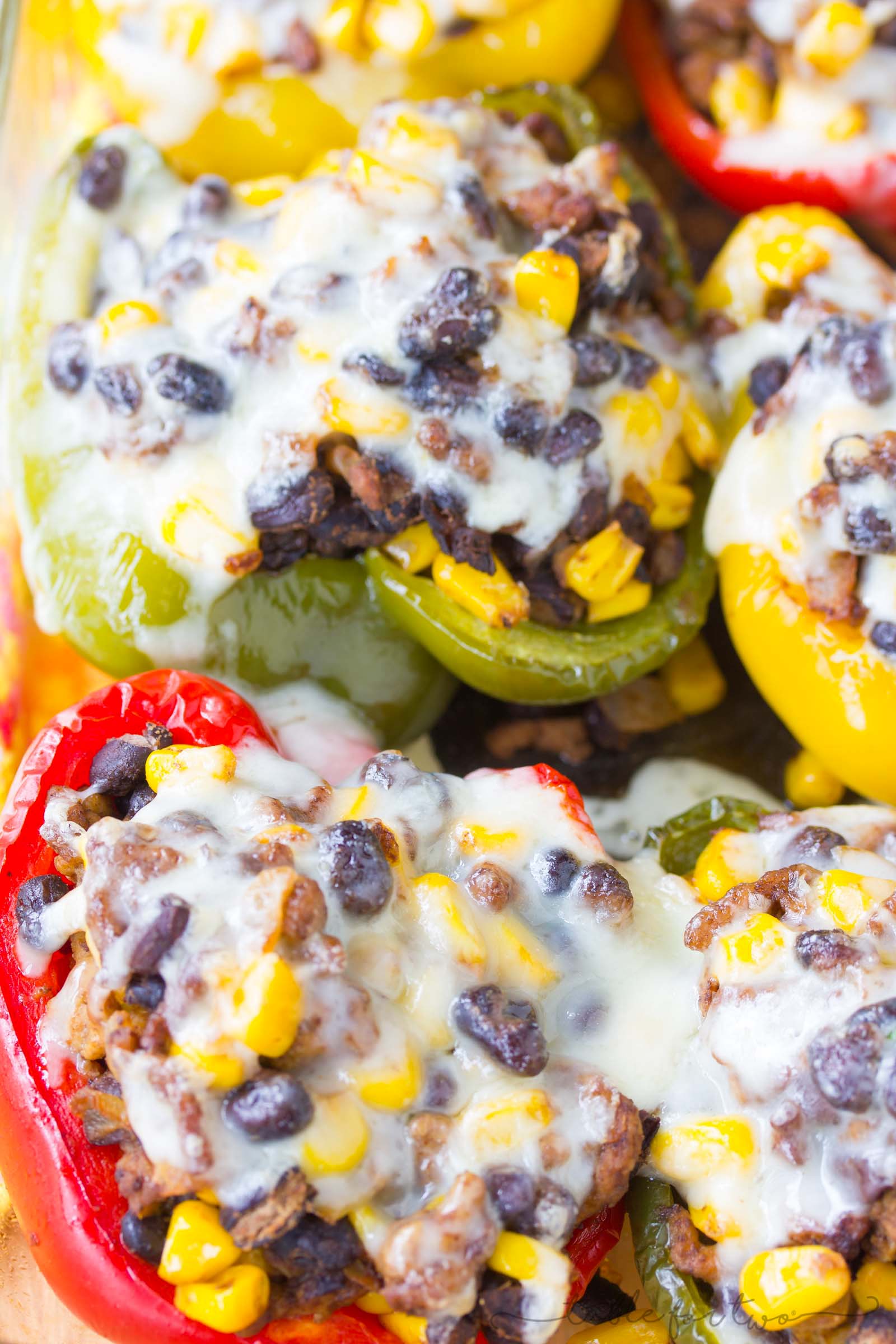 What is this stuffed pepper stuffed with?

What else can you stuff in a bell pepper?

Some people like stuffing rice in their stuffed peppers or quinoa!

Those are great easy grain options if you wanted more filling. 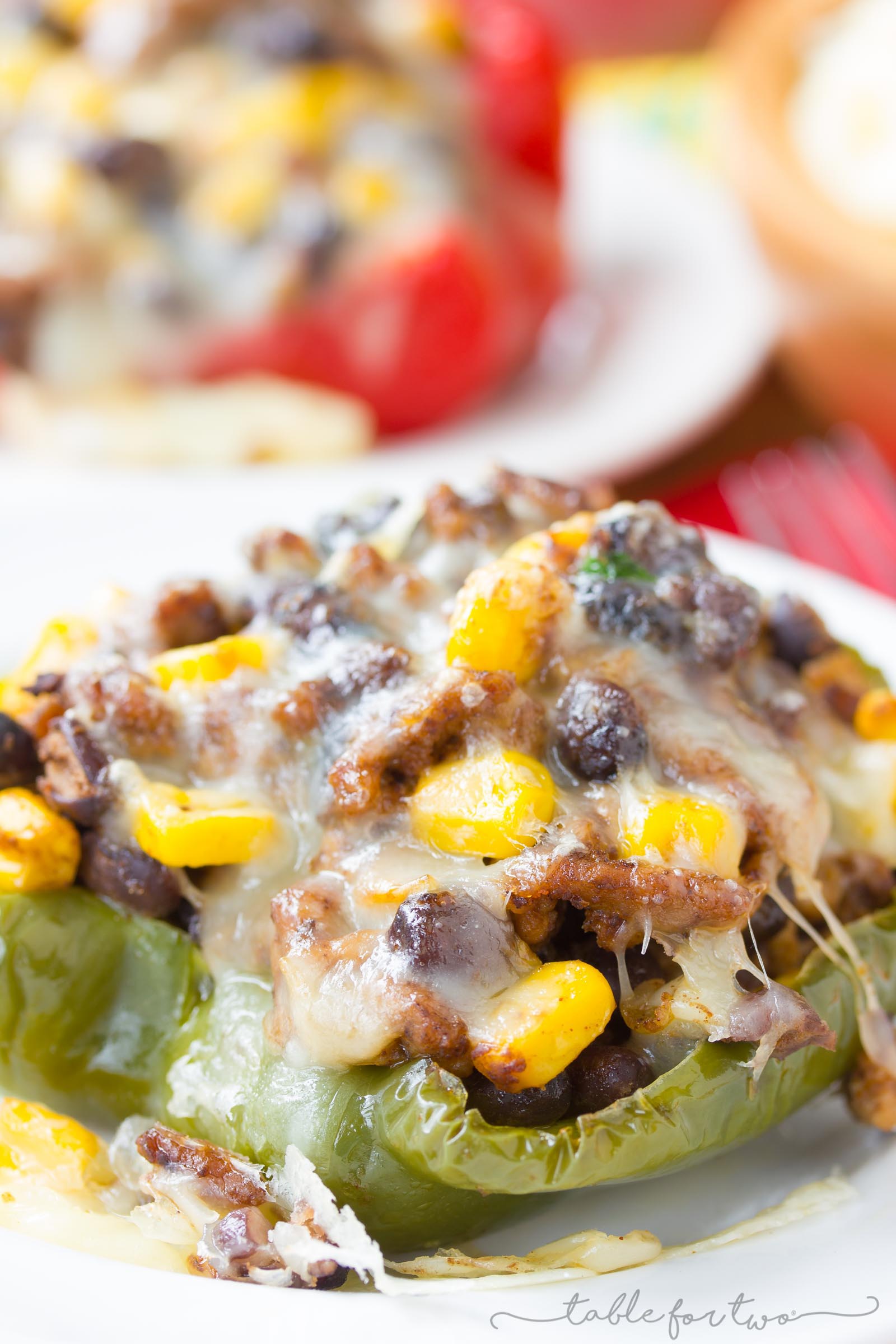 Can you use something other than ground turkey?

Yes! If you want this leaner, you could use ground chicken.

Ground beef would make this like a taco; I would suggest going for 90/10 or 93/7 for the ground beef so it won’t be overly oily.

My peppers aren’t softened after 20 minutes

You may just have a thicker bell pepper.

Just keep it in the oven longer. 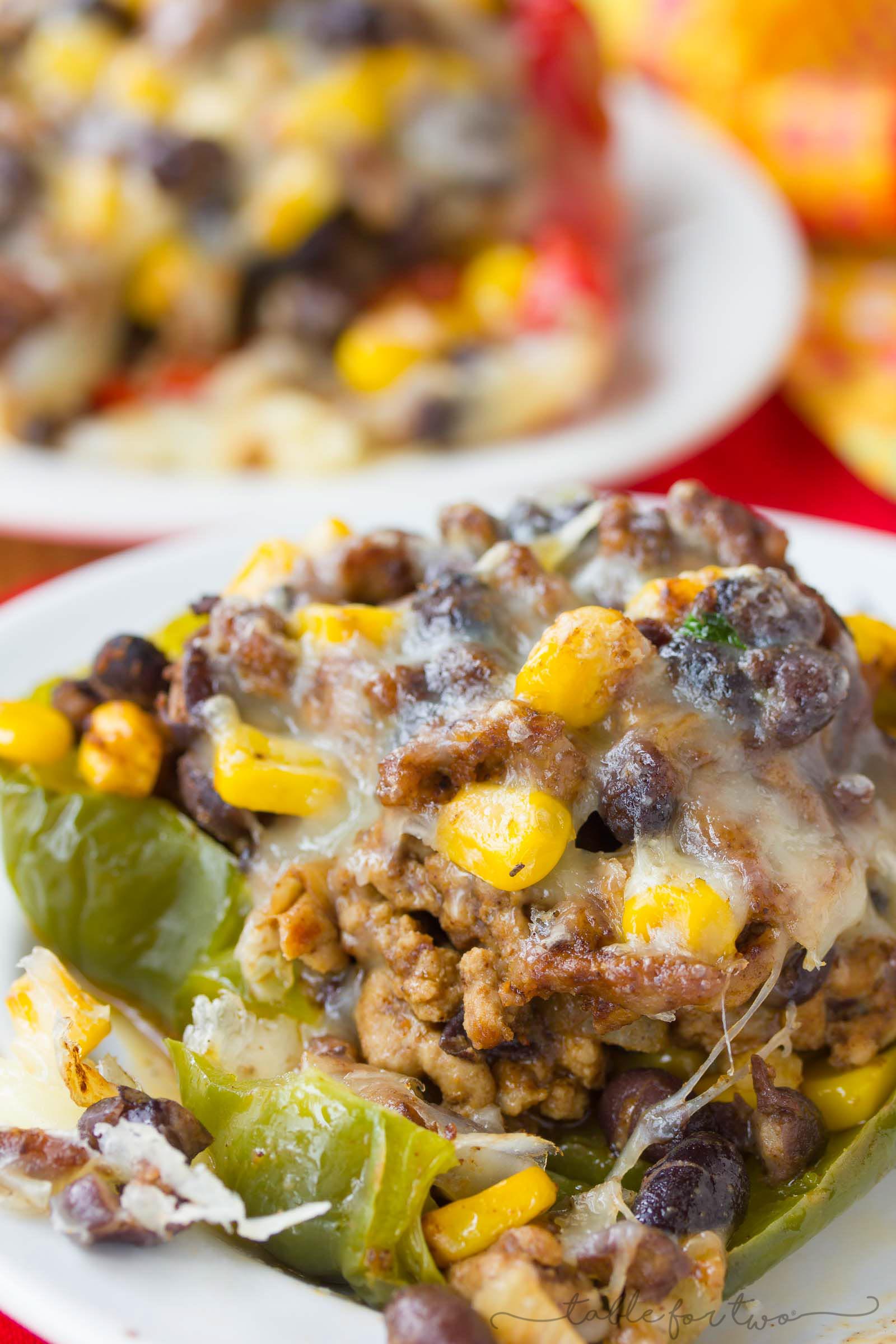 Can you stuff the peppers raw and just have everything cook in the oven together?

If you’re going to do this, I would cook the filling and then stuff them into the raw bell pepper.

I would then bake for 30ish minutes until the bell peppers are softened.

I would also sprinkle the cheese on in the last 5-10 minutes of cooking. 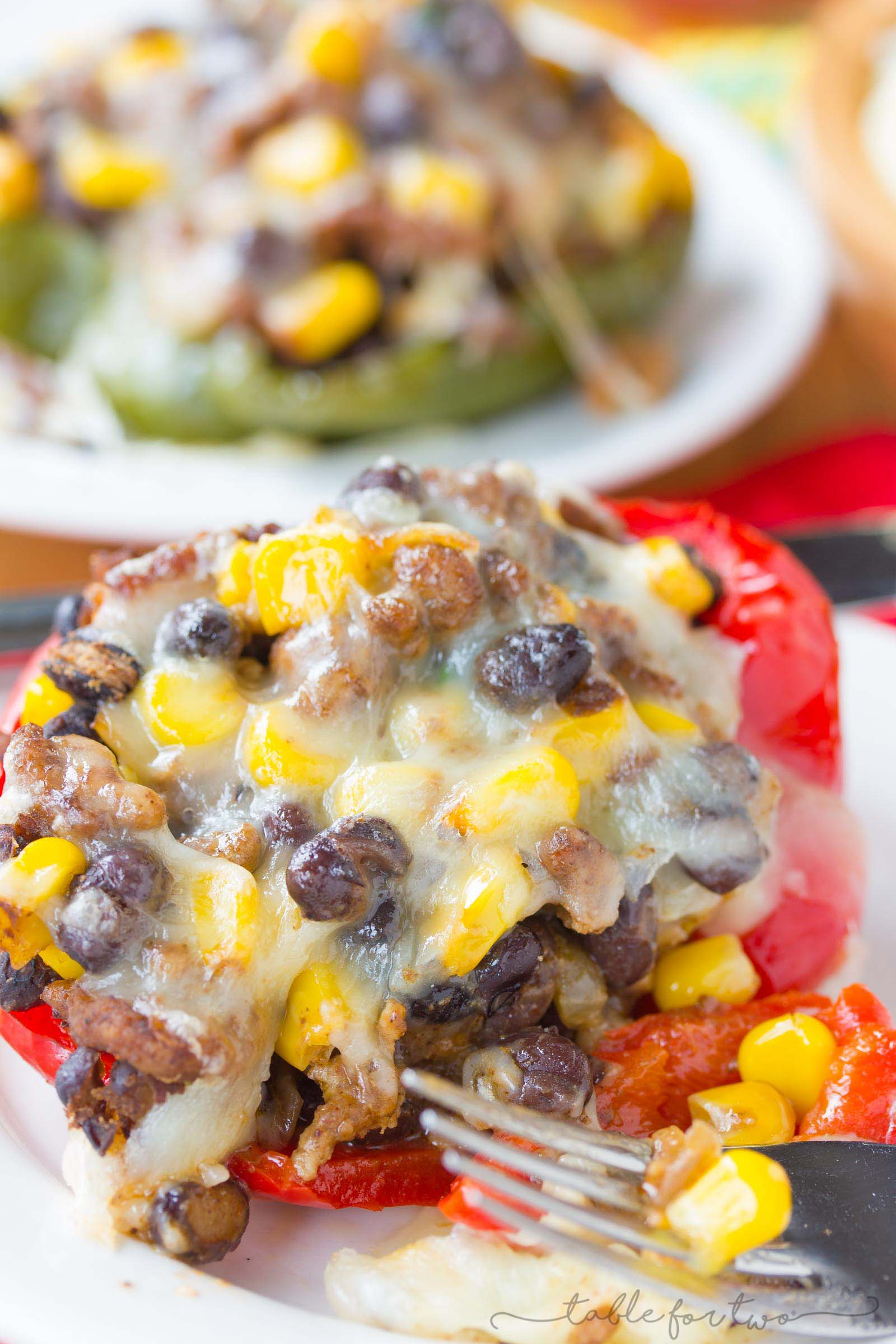 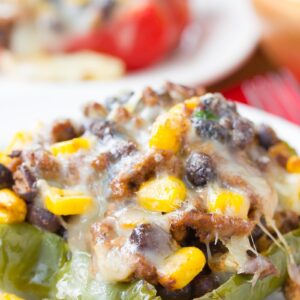 You can add quinoa and/or any other ingredient you feel like using in the mixture!

These stuffed peppers have been in my dinner rotation for a while now and I always forget to comment. They are tasty and easy....I am at the point where I don't need to look at the recipe which I love! I like to serve with sour cream and avocado and my husband puts hot sauce on too. So good. Thank you!

I never thought to add corn and beans into stuffed peppers before. These were GREAT. I also added jalapeño when I was cooking the onions. I will definitely make these again!

OMG- my old pictures are SOOOOO bad! I should do this too- love the new pictures and what a delicious looking recipe!

Funny, I am the total opposite of the commenters you mentioned. While I do appreciate inspiration from seeing new recipes, I have enough to last a lifetime(!) and not a lot of time to read a million food blogs. I have pared WAY down to reading only the ones that share a bit of personality and life stories as well as reliable recipes. Thanks for both!