Summer panzanella is one of my favorite ways to use summer’s fresh produce! It’s light, refreshing, and it’s basically the best kind of salad ever because it involves crunchy bread and lots of textures and flavors! 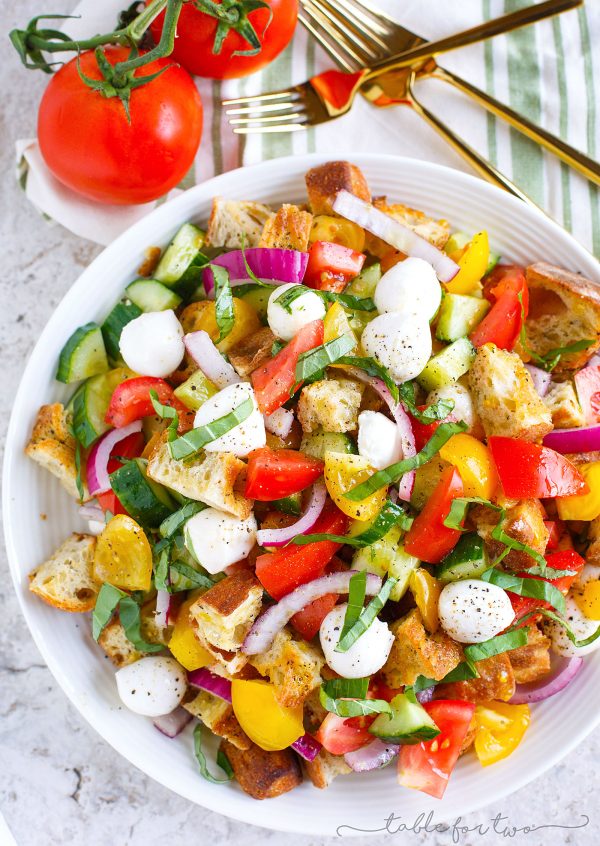 Okay, so I’ve been OBSESSED with panzanella this summer.

I know it’s been around for ages but this summer, I’m on a grilled/crunchy bread kick and have wanted to incorporate it in all my meals.

This summer panzanella checks off every item on my list: summer produce, grilled bread, basil, and cheese.

You literally toss this all together with olive oil, salt, and pepper and it makes it the most light and refreshing salad for summer!

You can make this ahead of time (more information on that below) or you can make it and eat it immediately!

Summer is almost over so take advantage and make this summer panzanella now and see why I’m so obsessed! 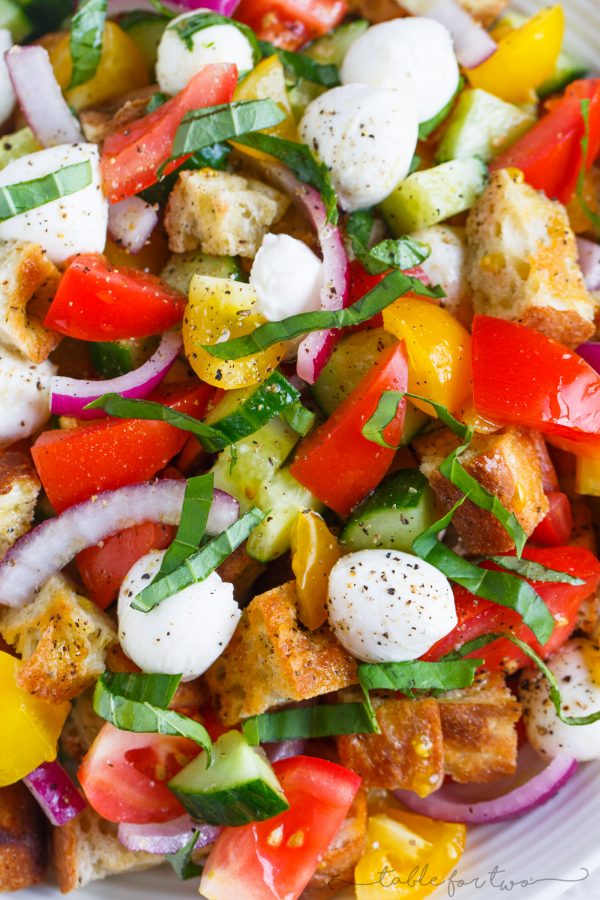 Panzanella is a Tuscan chopped salad of bread and tomatoes that is popular in the summer.

Over time, everyone has created their own versions of panzanella salad. It’s basically a bread salad.

I can stand behind that ratio because I’m always the one to pick off the croutons off a salad, haha

Can you make panzanella ahead of time?

This depends on what type of bread you like.

I love my bread crunchy and not soggy so I tend to make my panzanella salad and immediately eat it.

Plus, eating it immediately lets you get the warmth of the bread distributed throughout the produce.

However, I know people like to prep because you may be bringing this to a party or potluck.

Personally, if I were to make this ahead of time, I would put everything in separate bowls — probably all the produce in one and the toasted bread in another.

Then put it together right before the party.

However, if you want to toss it all together ahead of time, that won’t be bad either but just know that the bread at the bottom of the bowl might end up being a bit soggy. 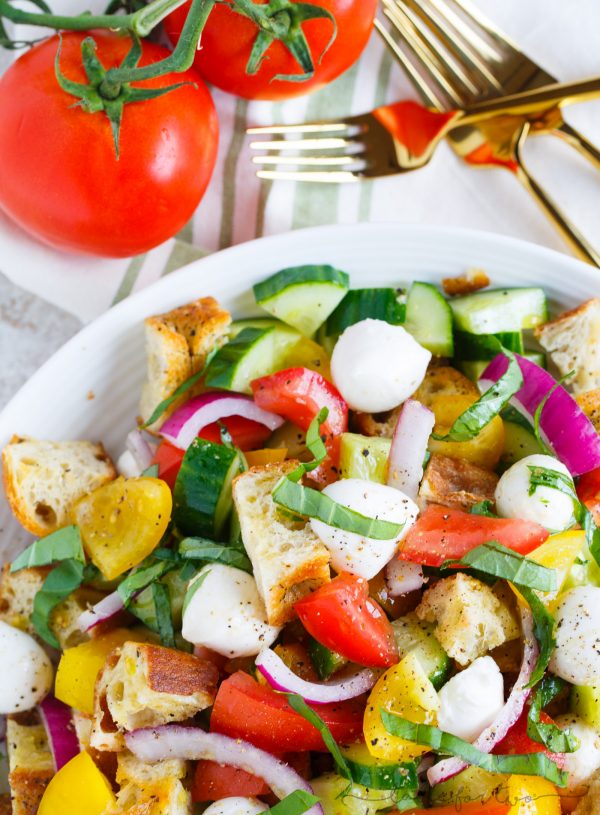 Jason and I ate this whole salad that you see pictured above.

It LOOKS like a lot of food but I think it’s because of the big chunks of bread.

Jason and I can eat A LOT whereas some people might not be able to eat the whole thing.

Whether you’re eating this panzanella for two or six, the fact of the matter remains: summer panzanella is 100% needed on your summer menu!

If you don’t like all the ingredients I put in my summer panzanella, feel free to sub out and sub in whatever you like. I just picked a bunch of summer’s best produce. 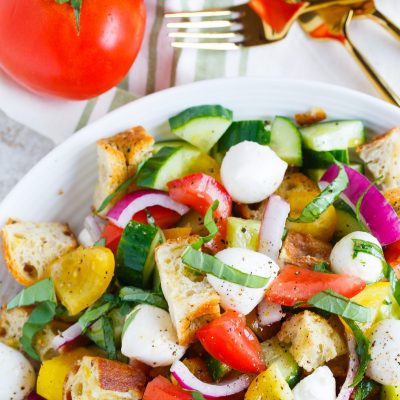 This summer panzanella is a refreshing and light summer salad that you will absolutely get hooked on! It's a great way to use up all that abundant summer produce!
Prep Time: 15 mins
Cook Time: 10 mins
Total Time: 25 mins
Servings (adjustable, but please note that results, timing, and cookware may vary when adjusting servings): 3 -4 servings
Calories: 245kcal
Author: Julie Chiou
5 Hassle-Free Ways to Simplify MealtimeSign up here for all the secrets!

We've grilled the bread (sliced the loaf in half and drizzled olive oil, salt and pepper on top) before but we also have toasted this in the oven. Either way you choose to do it is fine.
Nutrition Facts
Summer Panzanella
Amount Per Serving (1 Serving)
Calories 245 Calories from Fat 90
% Daily Value*
Fat 10g15%
Carbohydrates 22g7%
Fiber 1g4%
Sugar 2g2%
Protein 13g26%
* Percent Daily Values are based on a 2000 calorie diet.
*Nutrition facts are an estimate and note guaranteed to be accurate. 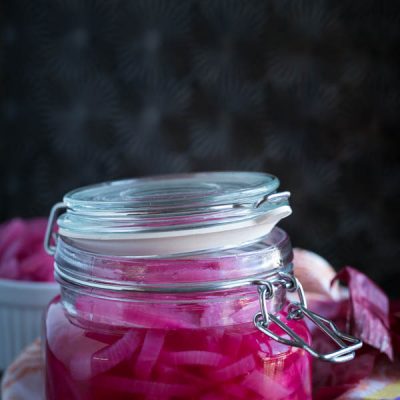 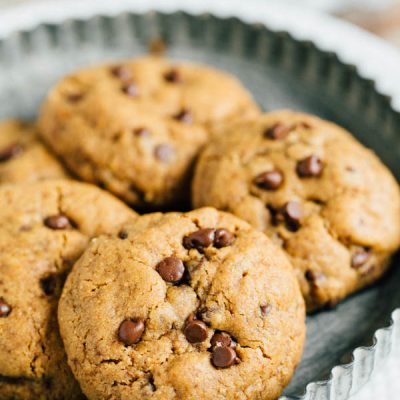 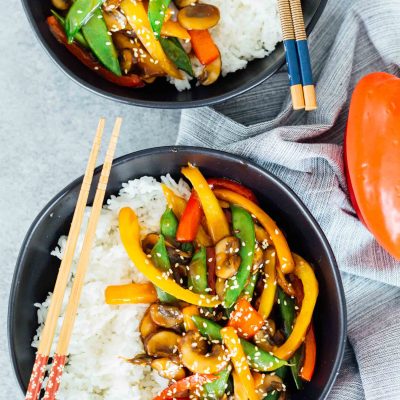 Meet The Author: Julie Chiou
Hi, I’m Julie and welcome to my table! I'm on a mission to simplify the relationship between food & busy lifestyles. I strive to inspire you with real recipes for real life that are always deliciously easy, innovative, and approachable that your whole family will love!