Home » Recipes » Side Dishes » Mexican Street Corn off the Cob

This Mexican street corn off the cob reminds me of Anthony Bourdain’s ability to transport you to another country and to try something new.

I’ve never met the guy but I did watch a lot of his shows and his storytelling was captivating. It transported you to each location and I felt that after each episode, I yearned for more and I had a desire to travel.

If I were to sort out my feelings over his passing years ago, I think he was an inspiration to me. Traveling for food, learning about one’s culture through food — that is what inspires me to travel and that is what Anthony did.

He literally went to every country with no judgement and truly wanted to learn.

I hope we all learn from this tragic event and carry on his spirit by exploring the world, being bold with food, and knowing to seek out help when you need it or reaching out to someone if you think they need it.

I have been pining to make this Mexican street corn off the cob recipe since last year.

I LOVE Mexican street corn but is there anything more awkward than eating an entire fresh corn on the cob at the table with your friends? Haha

I mean, I know it’s totally fine but I really hate it because 1. it’s messy, you end up with so much cotija cheese and other ingredients on your face, and 2. you get so much stuck between your teeth that if you don’t carry floss or toothpicks with you, it can get real annoying!

There are some restaurants apparently that if you ask, they will cut the corn off the cob for you when you order Mexican street corn.

So that got me thinking…then why not just make the entire dish IN a bowl OFF the cob in the first place?!

Well, that is exactly what I did and I could’ve eaten this ENTIRE bowl of Mexican street corn, or as they say in Spanish, elote!

Who would’ve thought taking ears of corn and cutting it off the cob would yield such an incredibly easy to make and loads of flavor dish?

The best part? Your face won’t be covered in cotija cheese, mayo, or corn.

However, I guess if you are all about the experience, you could make this on the cob too but I like taking ears of corn and shaving off the corn kernels into a big bowl (or small bowl if you’re saving some to snack on later) because it’s easier to divide up and share as a side dish!

How to make Mexican street corn (elote) off the cob

Prepare the corn kernels. You’ll want to either grill the ears of corn or cut off the corn kernels and char it in the skillet with some butter. They kind of spit and pop at you when they get hot (kind of like popcorn!) so just be careful.

Combine ingredients in a large/small bowl. Once the corn kernels are cooked/charred, add them to a bowl and mix in the mayo, cotija cheese, smoked paprika, green onion, and parsley (or fresh cilantro). Don’t forget salt and pepper, to taste! Stir together to incorporate everything.

Enjoy. Divide and enjoy your street corn…in a bowl!

Can I use frozen corn kernels?

Yes, just thaw it and make sure it’s warm (microwave or stovetop).

Can I grill the corn on the cob first?

You can use feta or queso fresco!

Friend, neither do I.

You can sub parsley!

Can I use vegan mayo?

You can use whatever mayo you want.

Should this be served warm or cold?

You can do either but it’s best warm!

How does this keep?

You can keep it in the refrigerator for up to three days.

I think this is best eaten as quickly as possible and I’m sure you won’t have trouble with that!

This Mexican street corn would be great to serve with a summer panzanella, grilled lime butter shrimp, or these grilled chicken kebobs!

Why is this recipe locked?

Some content is reserved for TFT Premium (TFT+) members. Membership is FREE and you can read more about it here or sign up below! 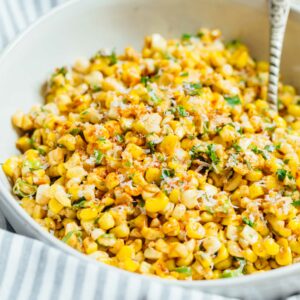 Mexican Street Corn off the Cob

A much less messier way to have your favorite side dish! Mexican street corn off the cob tastes just as great as the ‘on the cob’ version!
4.95 from 36 votes
Prep Time: 15 minutes
Cook Time: 20 minutes
Total Time: 35 minutes
Servings: 4
Author: Julie Chiou
Save Saved! Rate Print

Hello Julie, I'm Julie too. And I just want to say that you're the only person I "heard" say cilantro tastes like soap. Because it really does and that's what I've been telling everyone. Anyway, I'm excited to make corn elote with your recipe. Cheers!

yes, i can't stand it! i wish i could like it but unfortunately we just have the gene that makes it taste like soap :(

hi, thanks for pointing that out. i have the ability to add that function in for the parenthesis, but it's manual so i must've missed it when i was doing this recipe. it has been modified now so when you scale up or down, the numbers in the parenthesis change along with it.

Can this be made the night before? I want to make it for a work party and reheat right before time.

yes, you definitely can!

Great side dish for summer picnic

I have a daughter who will not eat mayonnaise whatsoever....can I substitute yogurt?

you can but it will likely be a lot tangier and not as creamy tasting. mayo gives it a much creamier taste!