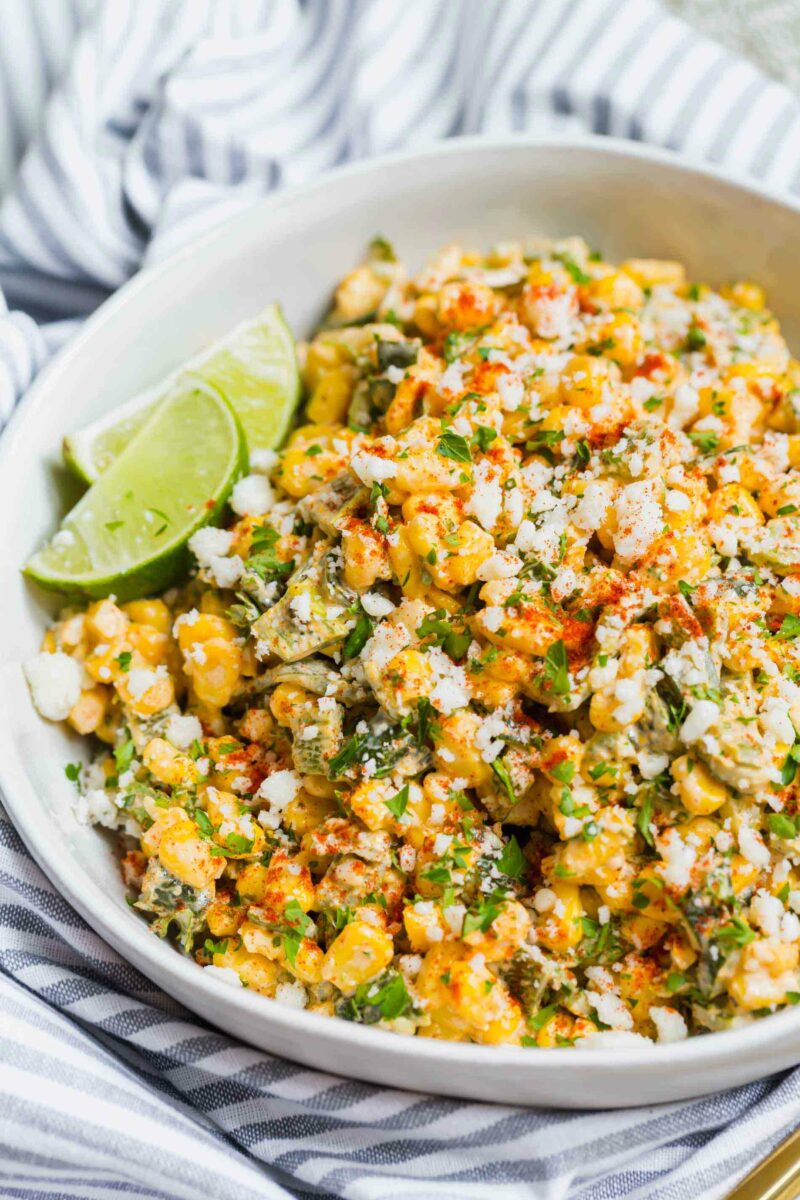 It’s almost the same version as my original Mexican street corn off the cob but there is definitely some subtle variations, which I’ll get to shortly.

You all LOVE the original Mexican street corn off the cob recipe and it’s actually the second most popular recipe on my site for months now.

Definitely am not shocked by this because it’s SO good and SO easy to make. 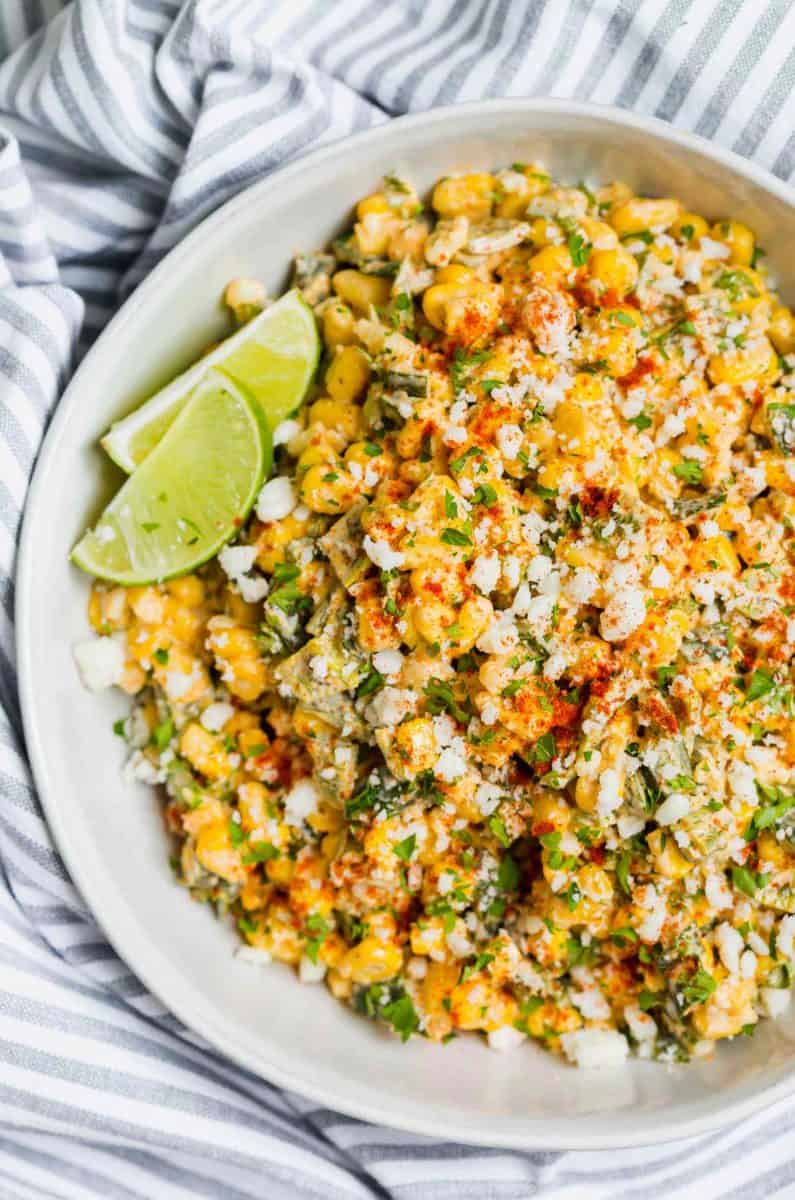 I love Mexican street corn off the cob because it’s way less messy and you can get so much more of it.

Let’s be real, when you eat corn on the cob, you don’t really get all the kernels because there’s always some parts of it left on the cob.

With Mexican street corn off the cob, you get every morsel (or kernel) and you are able to get so much more of it.

Not to mention, you won’t have the need to floss immediately after.

How is this different from your original Mexican street corn off the cob recipe?

For one, this poblano version is creamier because I ended up using a more butter and mayo ratio.

It has a smokier flavor because of the roasted poblano peppers and the lime squeeze gives it a nice burst of tang and zing. 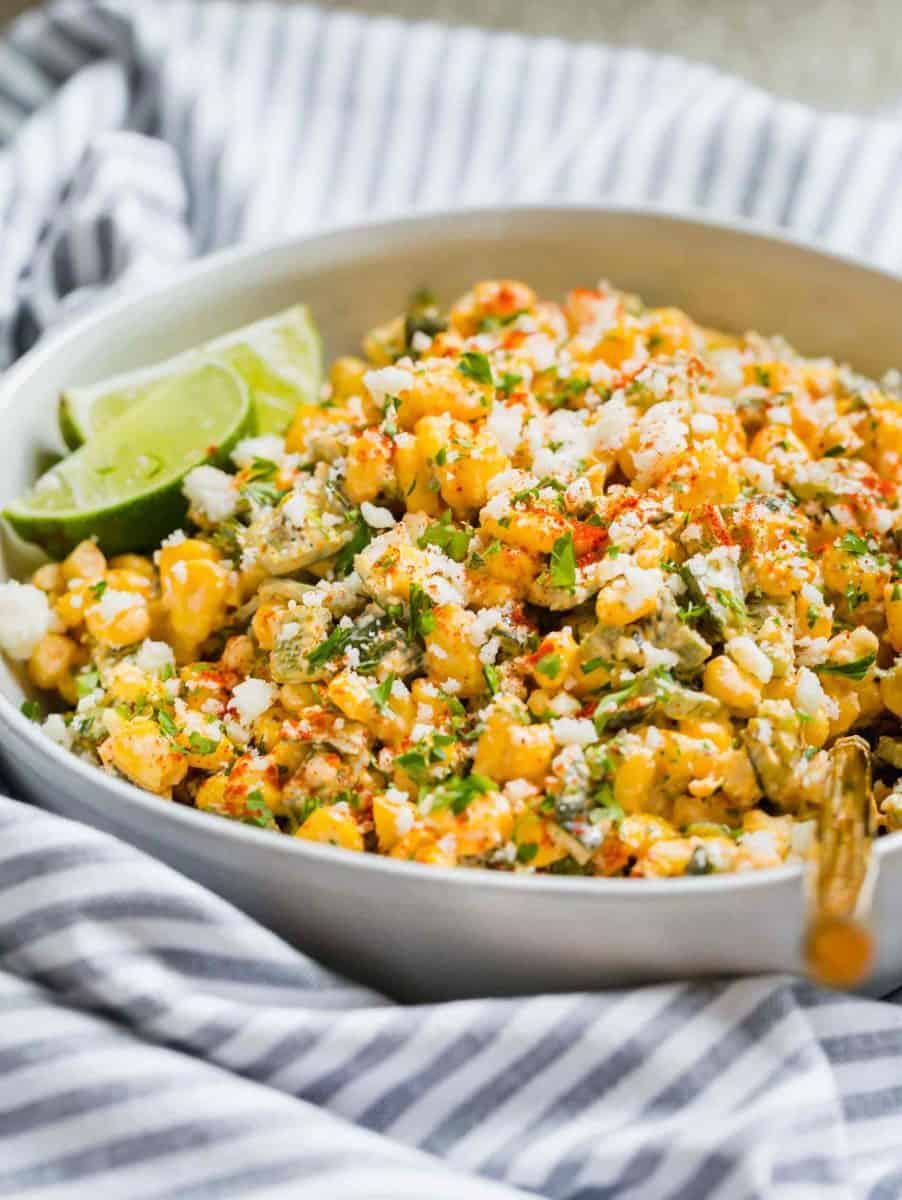 Can I use frozen corn?

Yes, that’s what I did this time because sweet corn isn’t around just yet.

Just thaw it and make sure it’s warm (microwave or stovetop).

Can I grill the corn on the cob first? 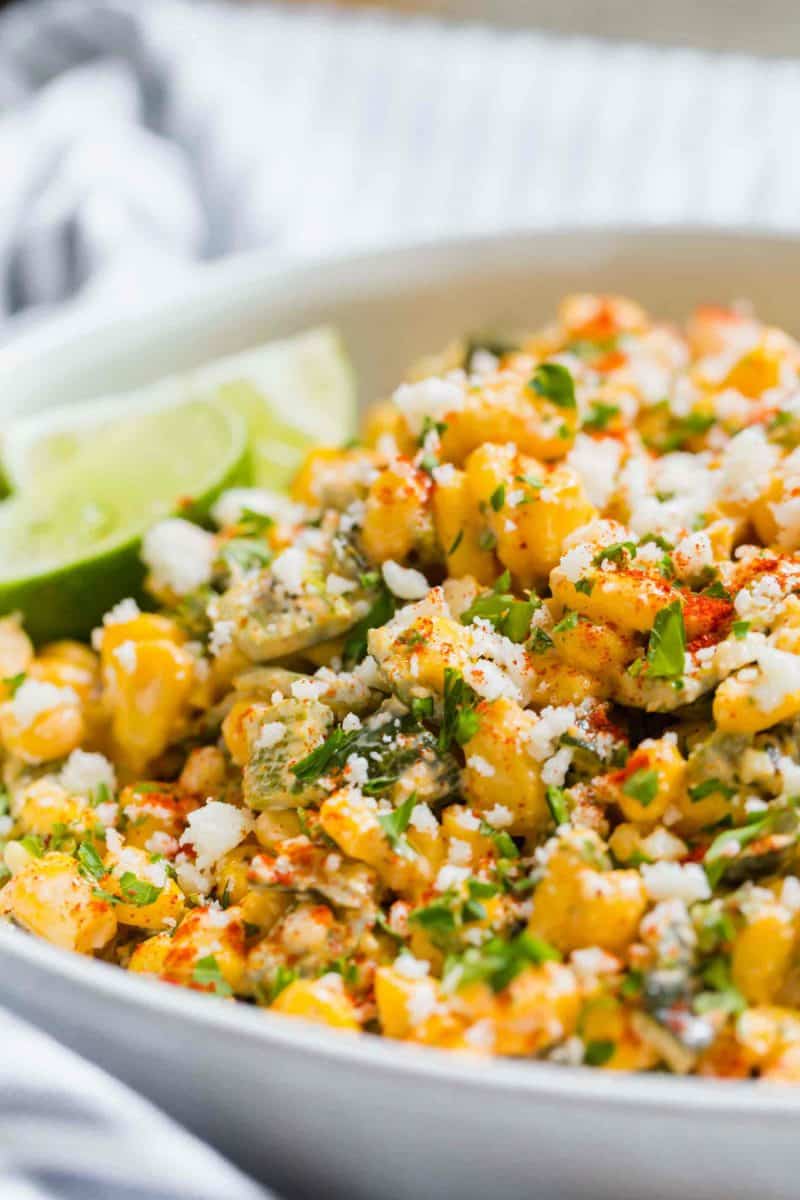 You can use feta!

Friend, neither do I. I think it tastes like soap…which is why I used parsley in this!

Can I use another type of pepper if I can’t find poblano peppers?

Poblano peppers are fairly mild in flavor and heat so if you can’t find poblano peppers, I would just opt to make the original Mexican corn off the cob recipe.

If you used something like a green bell pepper, it would overpower the rest of the flavors of the dish and if you used another pepper, it might be too spicy. 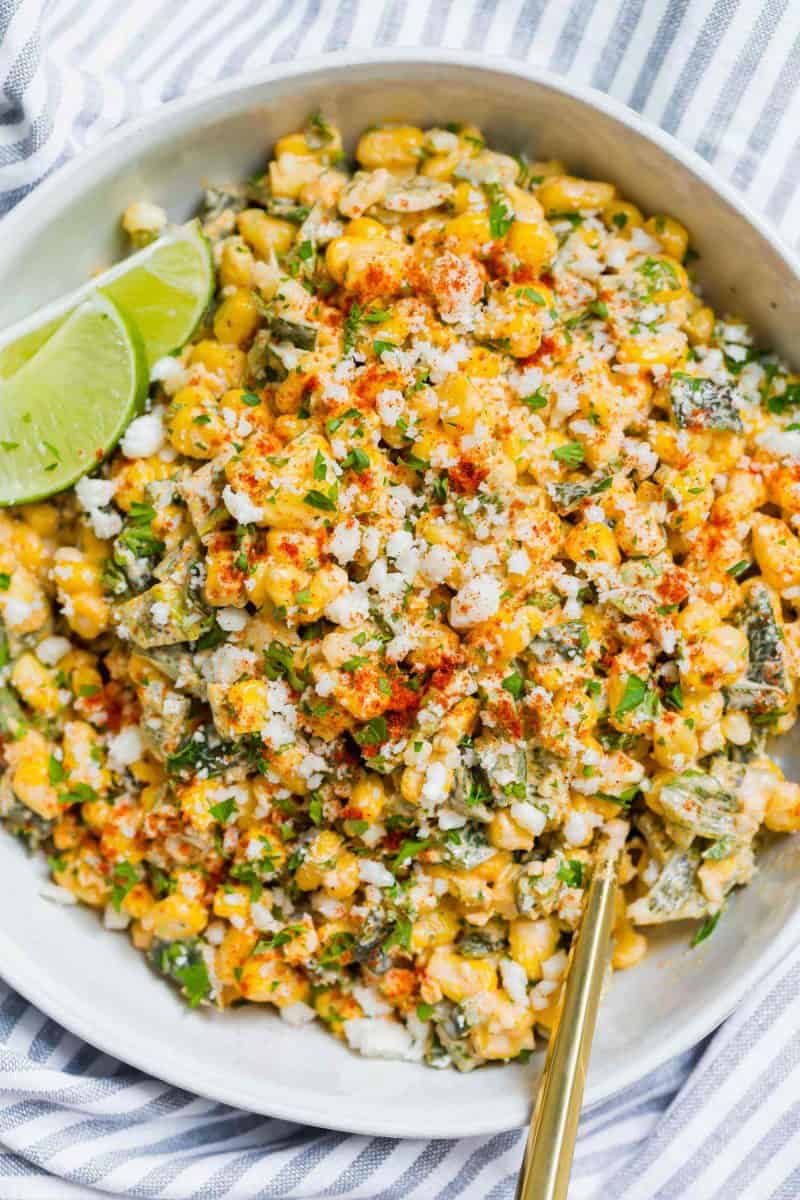 Can I serve this cold?

I think it is best room temperature!

How does this keep?

You can keep it in the refrigerator for up to three days but eating it as soon as possible is the best.

You likely won’t have a problem with this keeping though, lol 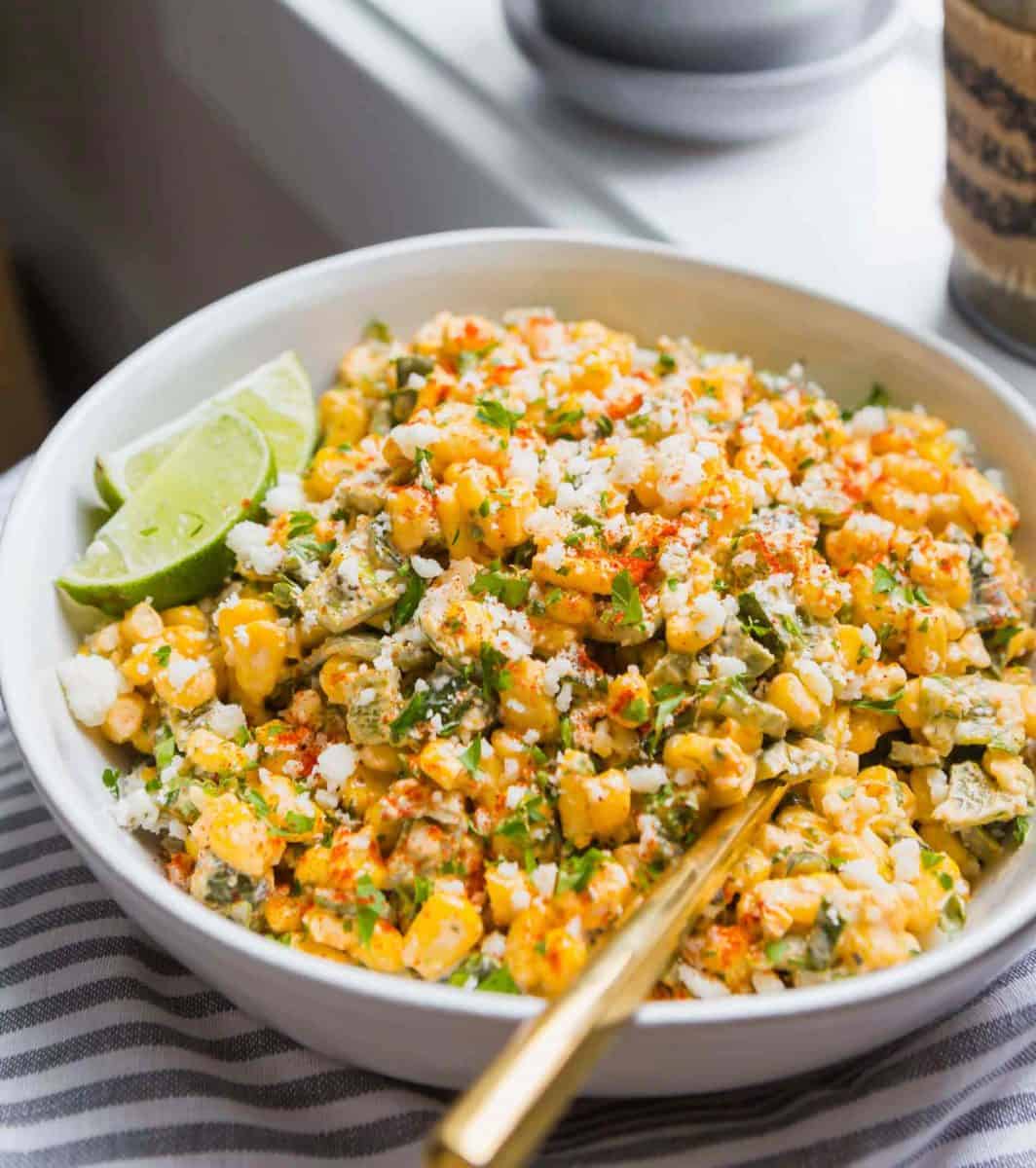 If you like this poblano mexican street corn off the cob, you’ll like these other side dishes: 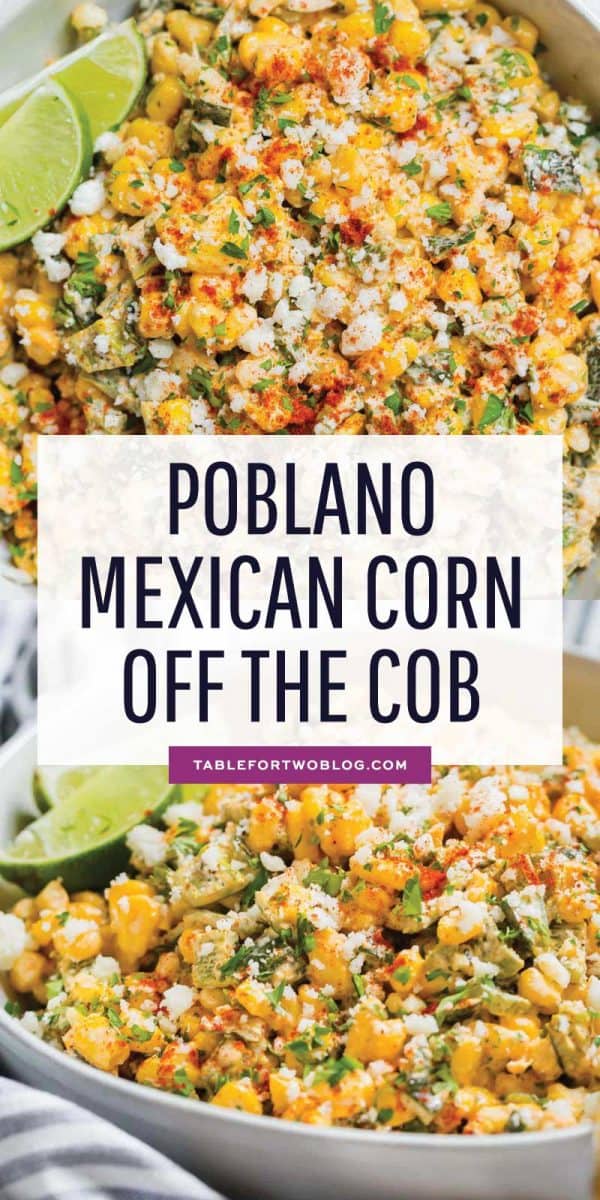 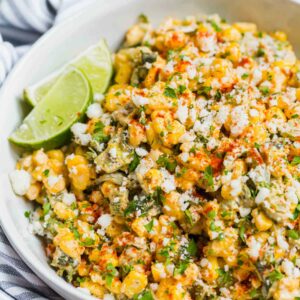 A much less messier way to have your favorite side dish! This take on my original Mexican street corn off the cob is made with poblano peppers!
4.41 from 5 votes
Prep Time: 30 minutes
Total Time: 30 minutes
Servings: 6
Author: Julie Chiou
Save Saved! Rate Print

This sounds amazing!! OFF THE COB is genius... With this recipe, how many does it serve? It says to use a large bowl, but I want to make a huge quantity. Thanks so much!!!!

A little bland. I added ancho chile powder to the mayo, went heavy on the smoked paprika, and chopped up some red onion and green onion to mix in. I also added a couple tablespoons of fire roasted salsa verde at the end to kick it up a little more.

This was absolutely delicious, thank you!

this is good - I've only had mexican street corn one other time when I tried a new recipe. It was good and so is this - sweet and smoky. Off the cob and eaten with a fork - a lot less messy (haha)! Will make again. Thanks for sharing!

Sooo good! We make this over and over!