These pumpkin cinnamon rolls are light, fluffy, and creamy. They have a rich cream cheese frosting, and a filling that’s full of autumn spices. Plus, they’re quicker and easier to make than most cinnamon roll recipes!

I’m a huge fan of cinnamon rolls. They can be served as a decadent breakfast food, a fun afternoon treat, or as a special dessert. And these pumpkin cinnamon rolls are some of the yummiest and fluffiest ones I’ve found.

This recipe has all the comfort of traditional cinnamon rolls. But with pumpkin dough, and pumpkin pie spices, it brings a lot of new flavors to the table. One bite of these pumpkin cinnamon rolls and you’ll be hooked … trust me!

Why These Pumpkin Cinnamon Rolls Are Special

My favorite thing about this cinnamon roll recipe is that it uses all kinds of fall flavors. Not only is the dough full of pumpkin, but it also has cinnamon and nutmeg. In the filling you’ll find some more of those spices, as well as ginger, allspice, and cloves. And the smooth cream cheese frosting is full of maple syrup. In other words, these pumpkin cinnamon rolls are the perfect sweet treat for a cold autumn day, or a holiday morning.

I also love how easy this recipe is. It takes less than an hour and a half to make, even with rising and baking. And the recipe is straightforward and easy to follow.

Here’s everything you need to make these fluffy pumpkin cinnamon rolls. Scroll to the recipe card at the bottom of the page to see the exact quantities for each ingredient.

How to Make Pumpkin Cinnamon Rolls

This is an easy recipe to make, and it’s fun, too!

If you feel like customizing your pumpkin cinnamon rolls, you can do so easily. Here are some of my favorite variations for these sweet treats.

Here are the answers to some common questions about this pumpkin cinnamon roll recipe.

Can you use other types of yeast?
I strongly recommend using instant rapid rise yeast, as it’s really easy, and makes the recipe quicker. However, you can also use dry active yeast if that’s what you have. Just let it sit in the warm milk mixture for about 5 minutes, and add 10-15 minutes to the dough rising time.

Can I Make This Cinnamon Roll Dough Ahead of Time?

If you’re making these pumpkin cinnamon rolls for breakfast, you can assemble them the night before. If you do that, just cover the cinnamon rolls in plastic wrap, and leave them in the fridge. Take them out of the fridge 15-30 minutes before baking, then bake according to the directions.

How to Store and Reheat Leftovers

You can store these cinnamon rolls in the fridge for up to 3 days. Just make sure that they’re in an airtight container. To reheat, add a little butter on top of the cinnamon rolls for moisture. Cover them in aluminum foil, and bake in a 350F oven for 10-15 minutes. Bake them only until they’re warm all the way through, as you don’t want to dry them out.

These pumpkin cinnamon rolls can also be frozen in an airtight container for up to 4 months. Let them thaw completely before reheating.

I hope you loved these pumpkin cinnamon rolls as much as I do! If you did, then check out these other delicious, sweet pumpkin recipes. 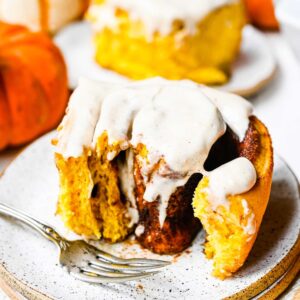 Store in an airtight container in the fridge for 3 days, or in the freezer for 4 months. Reheat in a 350F oven, covered in foil, for 10-15 minutes.

Can you use non dairy ingredients?