These are the best homemade cinnamon buns! Layered with rich apple pie filling, my cinnamon rolls have golden brown tops drizzled with tangy cream cheese frosting. Bake these to enjoy today – you don’t have to wait for them to rise overnight!

The flavors of apple pie inside a soft and fluffy cinnamon roll sounds like one sweet deal to me. I wanted to take these two comforting fall favorites and bring them together. Enter my scratch-made apple pie cinnamon rolls!

The smell of these apple cinnamon rolls baking will envelop your whole house. I say grab a cup of coffee, a new book, and one (or three) of these and call it a morning!

Why You’ll Love These Cinnamon Rolls

Homemade apple cinnamon rolls ready in just over an hour?

I took away time-constraint issues from this apple cinnamon rolls recipe. I used instant yeast and the dough for the rolls has just two ten-minute rest times to proof and rise. This recipe also uses pre-made apple pie filling to spread onto your yeasted dough. While they bake, whip together a tangy cream cheese frosting with cinnamon.

Soon you’ll be enjoying all the Fall feels with none of the hassle. See? Easy as (apple) pie.

Here’s your shopping list for making these Fall-flavored cinnamon rolls. See the recipe card below for exact measurements of each ingredient.

Here’s a step-by-step on how to make these easy cinnamon rolls with apple pie filling:

A few tips when making these homemade apple cinnamon rolls:

How to Store and Reheat Cinnamon Rolls

Keep your extra rolls fresh so you can enjoy for breakfast tomorrow.

These will keep in an airtight container in the fridge for 4-5 days. To reheat, simply microwave for 20 seconds.

Can I Freeze These?

Did you have leftover baked rolls? Here is how to freeze them.

Make ahead and simply thaw before baking. 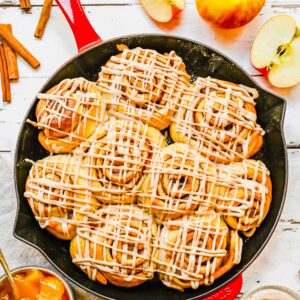