Eat it with your hands and have fun, because this Apple Cinnamon Monkey Bread is finger licking good! You only need two ingredients and under an hour of your time to make this Fall-favorite dessert.

All you need to make this ring of delicious monkey bread is store-bought cinnamon rolls and apple pie filling. While I love some recipes entirely from scratch, I also love a good ol’ store-bought wonder, and this is one of them!

The best part is, whoever tries it will have NO idea it’s made with such simplicity. It’s that good!

Apple cinnamon monkey bread is ideal for so many different occasions.

Halloween parties, Thanksgiving dessert, or just because you need something to snack on while you carve pumpkins with the family! No matter the occasion, this easy to make (and super budget-friendly) monkey bread will make it ten times more tasty.

Oh, and the best part? You’re supposed to eat it with your hands! If you have kids, they’ll be SO very happy. The sticky fingers that are the aftermath might not make you so happy though, lol

You only need two store-bought not-so-secret ingredients to make this autumnal monkey bread.

This is a great dessert recipe if you’re balling on a budget, or just don’t feel like buying a ton of stuff at the store!

What kind of pan do I need to make apple cinnamon monkey bread?

Any sized bundt pan will do the trick. And if you don’t have a bundt pan, a rectangular baking dish will also get the job done.

Can I make this with another filling?

Yes! I do love the versatility of this. You can use whatever filling you want or combine flavors.

However, if you wanted to add a sprinkle of cinnamon or apple pie spice on top of the still drying icing, that will add a touch more Fall flavor!

Warm, spiced apples and cinnamon desserts are SO in this year! 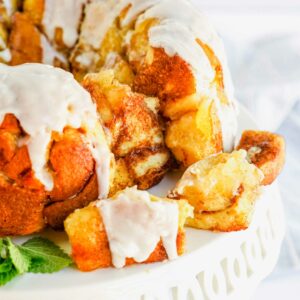 You can use any size bundt pan for this recipe. Alternatively, you can use a rectangular baking dish.