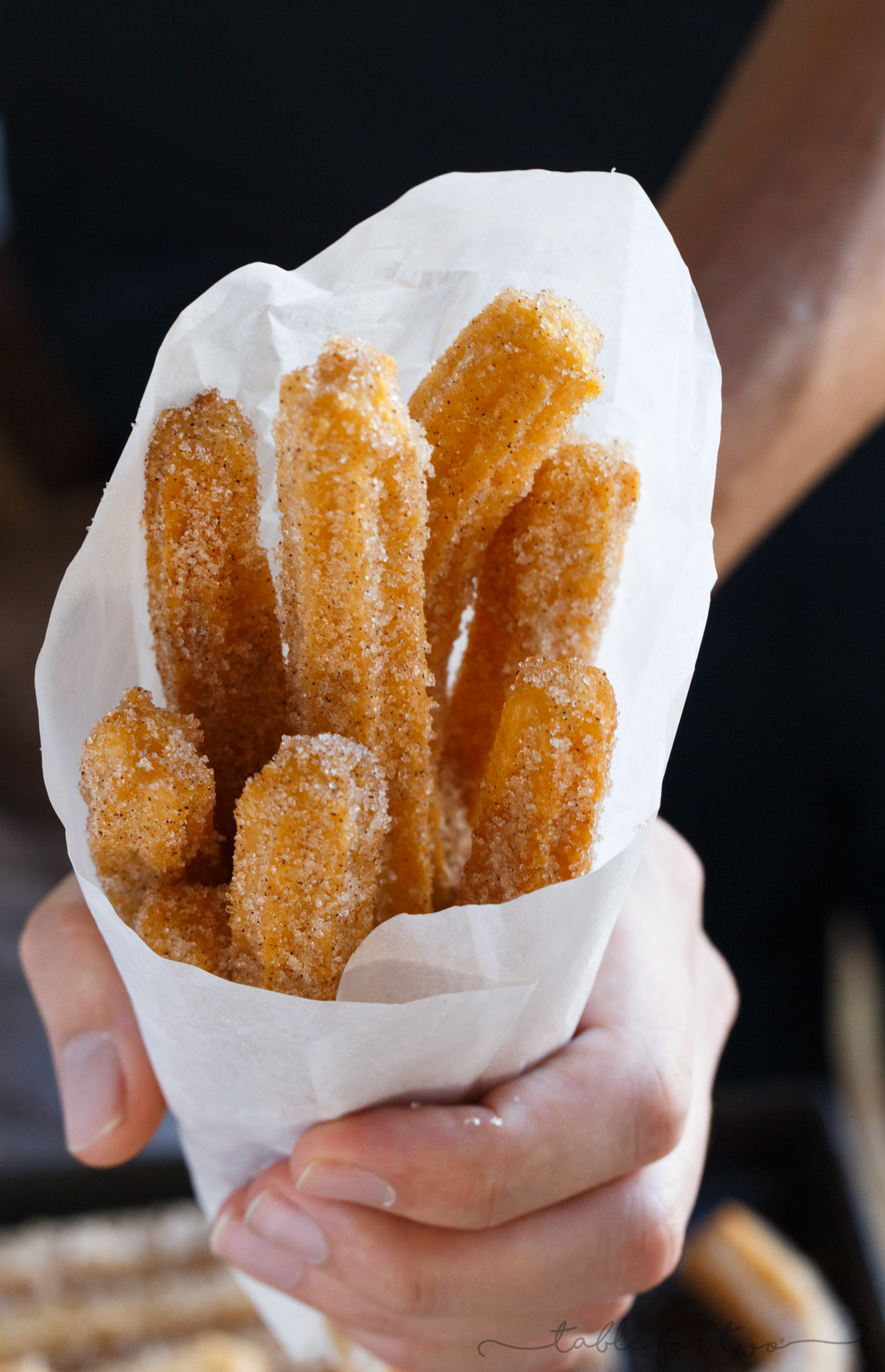 It’s crazy to think but it’s been a month since I went to Mexico!

One of my favorite moments about traveling is the food experiences everywhere you go. I knew prior to going to Mexico that I HAD to find real Mexican churros.

I wanted to taste the authentic churros that everyone raves about. You know, not the ones you get at Costco.

And as sad as it is, the only ones I had prior to Mexico were the ones from Costco! I never made it at home myself and I had never been to Mexico prior to the cruise so the only basis of churros I had was one from a warehouse store, lol!

I had the opportunity to go to Puerto Vallarta.

To say I fell in love with that place is an understatement. Prior to the trip, I had no idea what to expect with Puerto Vallarta. I have heard of the place but I didn’t do any prior research.

I guess that’s one good thing about a cruise; they kind of do it all for you. They set up your excursions and they let you explore the city at your leisure.

In the morning, we had a quick excursion and then we had the entire afternoon to explore. After we got back to the ship to freshen up; we hit the town.

The best advice: hire a taxi for half a day. They’re reasonably priced and the taxi drivers are all locals aka they know the spots!

Our driver took us to this restaurant called El Dorado and it was right on the beach. It was beautiful and the food was amazing. The margaritas were on point and the authentic fish tacos and ceviche were fabulous. 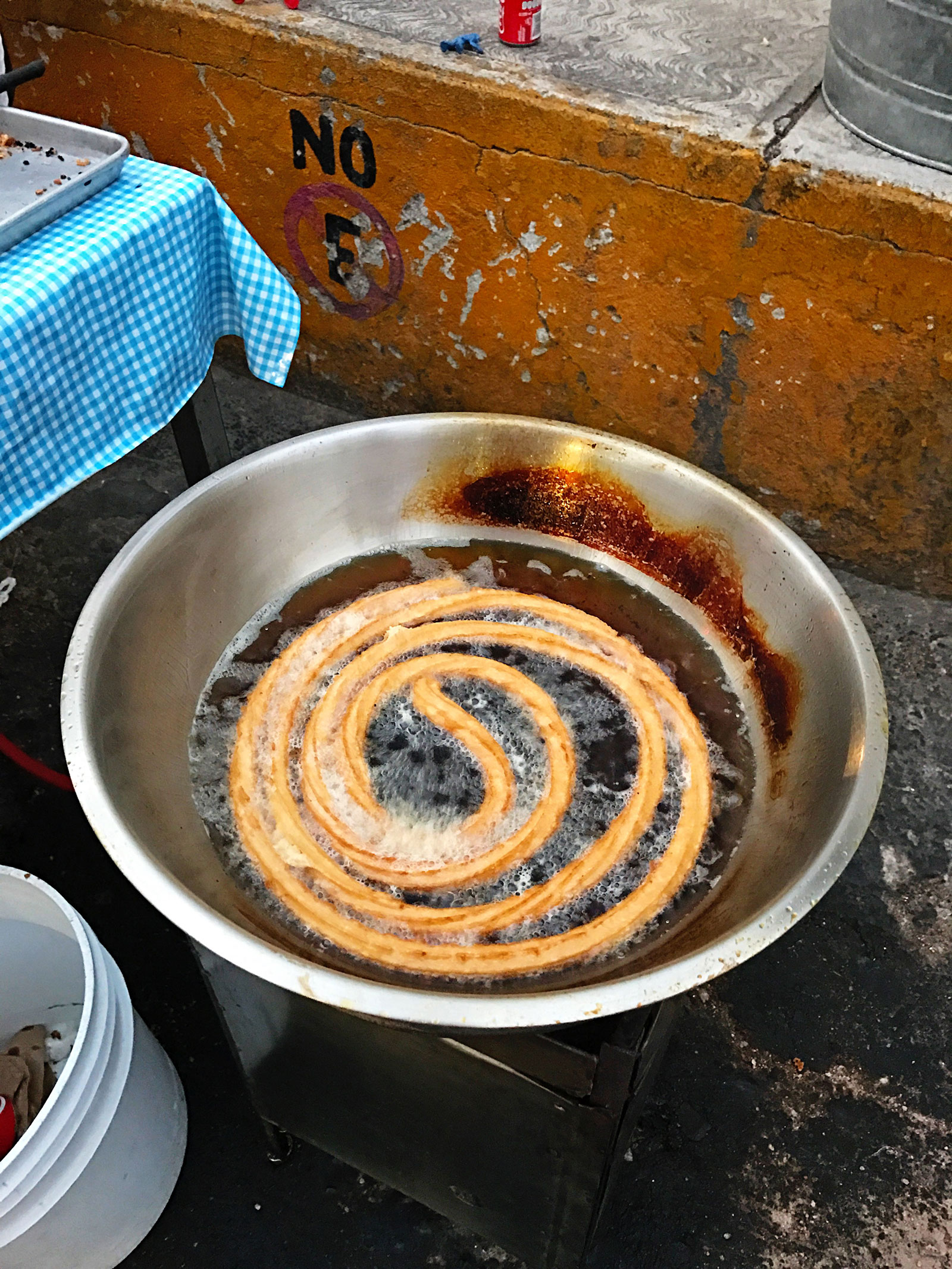 We kept telling our driver that we wanted authentic Mexican churros and he said he knew of one place.

ONE, in all of Puerto Vallarta! I think it was also the season we were there; it wasn’t busy season, but thankfully, since our driver was a local, he was able to show us.

It was literally a small stand on the side of the road. I wish we had gotten more than we did. We had to split it amongst four of us and it went fast ;)

Piping hot, straight from the fryer, the lady quickly tossed that ring of fried dough into a cinnamon sugar mixture and then using kitchen shears, broke the ring into equal pieces and tossed it in a brown paper bag.

After we got our authentic Mexican churros, we hopped back into the taxi to head back to the ship – grinning ear to ear that we achieved our goal on the first day of port! 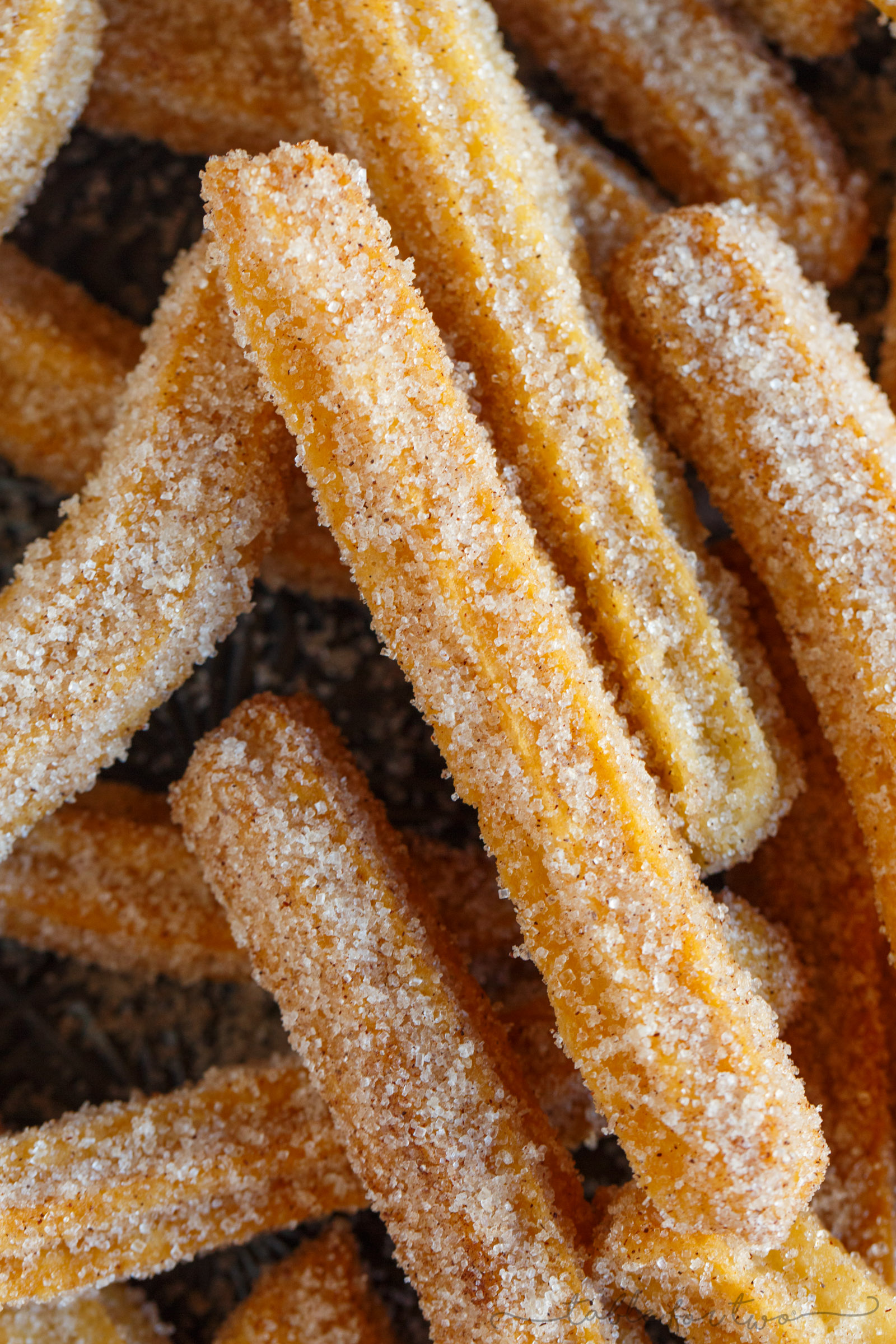 These homemade Mexican churros were perfection on a Saturday morning.

We had these the same weekend as the homemade apple cider doughnuts and seriously, the two best mornings.

The best tip I can offer you for making Mexican churros at home is to work fast.

Once you’ve got the dough formed, the egg part is tricky.

You obviously don’t want it to scramble but working fast and stirring vigorously will ensure it doesn’t scramble.

Additionally, using a piping bag with a star tip (I used a Wilton closed star-tip kind of similar to this one) will give you the classic ridges that are so prominent with churros. 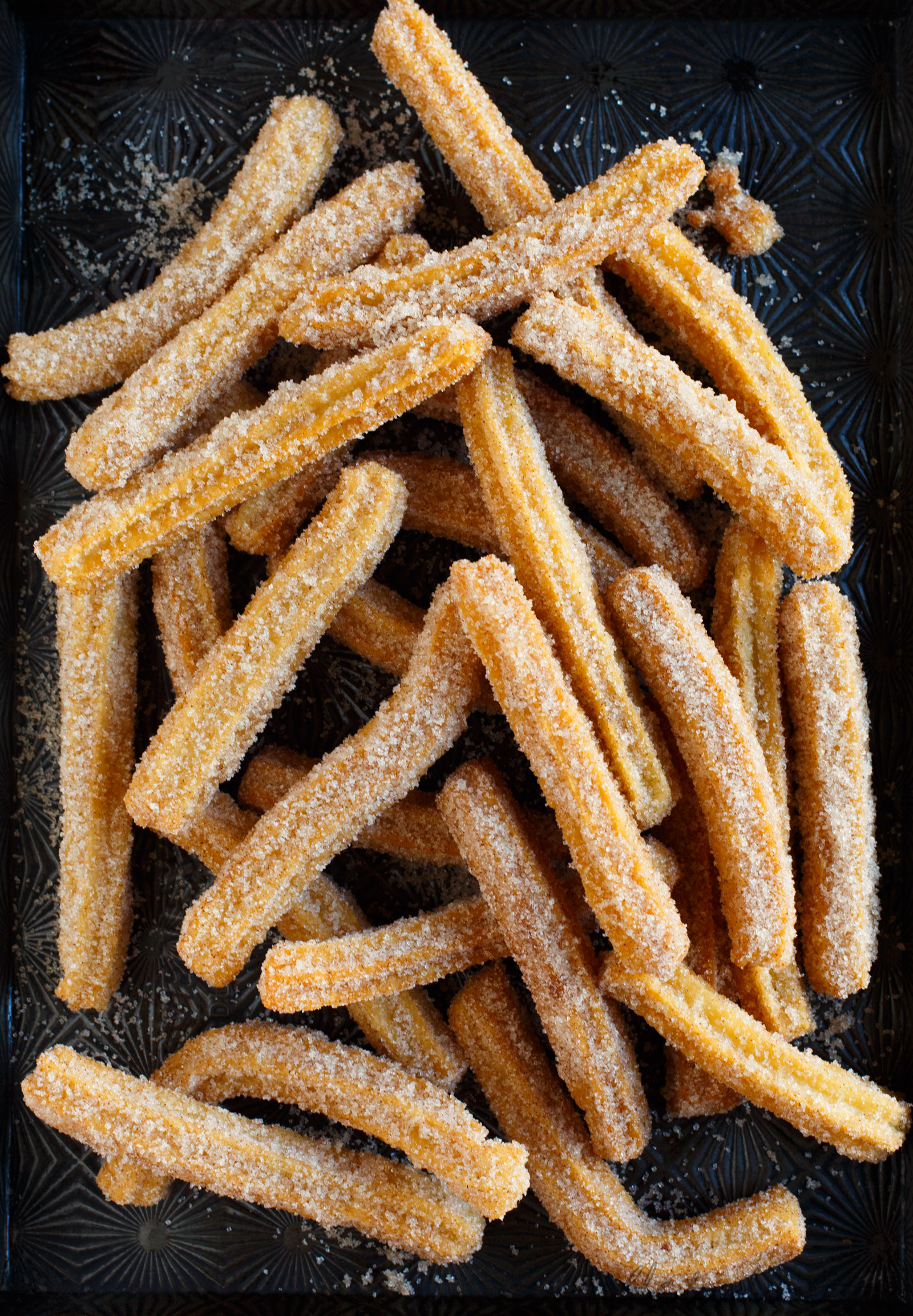 I could eat these Mexican churros all day.

They seriously rival the real authentic Mexican churros we had in the streets of Puerto Vallarta but I’m sure theirs is still way better.

I’m honestly dreaming of the next time I can go back to Mexico and get myself an authentic Mexican churro.

I guess for now, I’ll just stick to my homemade Mexican churros!

You should give them a try too :) 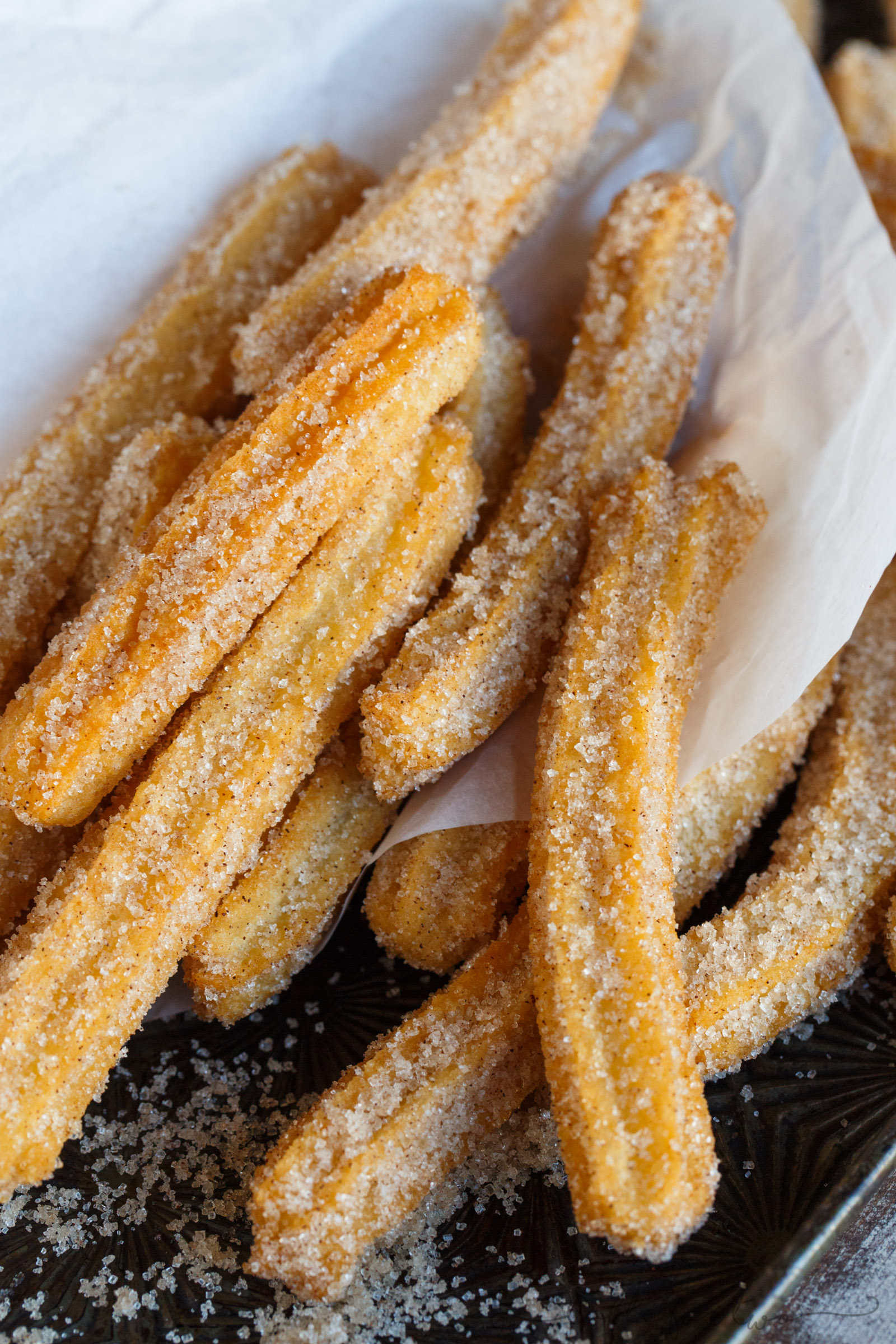 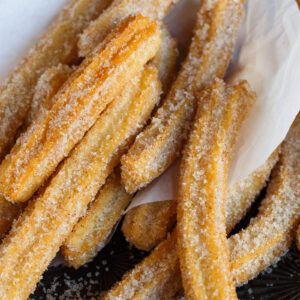 They tasted amazing, but the dough was the consistency of pancake batter. We followed the recipe on here, no wrong measurements, but we waited 20 minutes instead of 15. Was the extra 5 minutes bad?

i'm not going to say that 5 minutes extra was "bad" but i do know that when batter rests, it does get thicker (like whenever i make bread or muffins and i let the batter rest for a little bit as i prepare the baking pans) so i'm going to guess that's what happened!

This seems like a very interesting recipe...Ill defenitly try it

These were good! My husband and kids loved them. The dough was very stiff before I added the egg so I used beaters to mix the egg in. I used vegetable oil to fry which seemed to work fine. They did end up kind of exploding where the center leaked out in the last batch but I didn’t have a fry thermometer so it may have gotten too hot like one of the other commenters experienced. I also don’t have a piping bag set so I just used a gallon ziplock and cut a corner to squeeze it out. So mine didn’t have the typical ridges but they were just fine!

Julie do you think I could use my kitchenaid and dough hook to stir. I have really bad arthritis and it makes it hard on the old hand trying to stir something thick.

i believe it'll work but just make sure to not overmix it!

These are incredibly delish!!! My granddaughter are stuck in the house because I’m compromised for the Coronavirus and shouldn’t b around people till this blows over. Anyway she asked me to pick a recipe and tell her how to make it but don’t tell her what it is. She jumped for joy when she tasted these. TYVM for making this time so yummy.