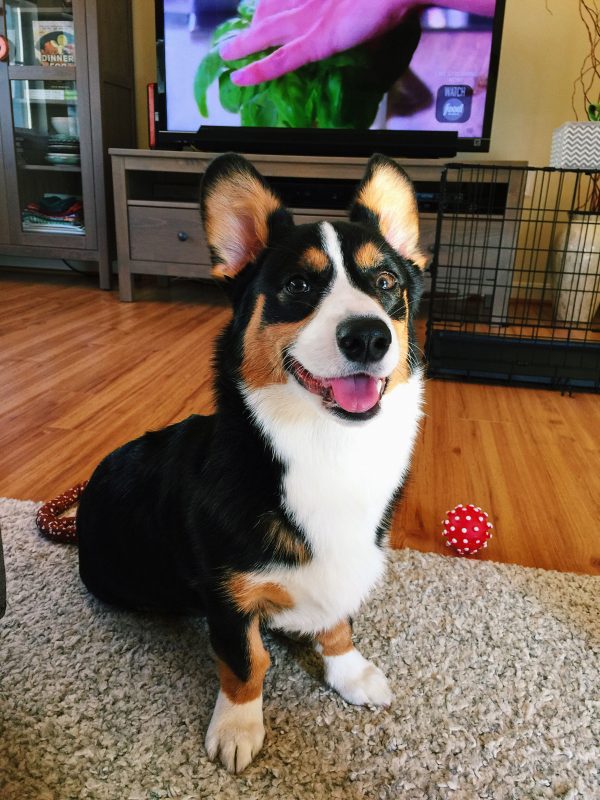 I feel like so much has happened between the last time I posted about Winston! The last time I made an update on Winston, he had broken his foot and went in for surgery. Then the blizzard happened while he was in a cast and that made for interesting times. Luckily, he was able to keep his cast dry and we didn’t have any complications from the snow and cast!

Today, I’m happy to report that he’s made a super quick recovery in just 6 weeks and he is completely healed! We were quoted 12-16 weeks but then when we started to go to physical therapy, the therapist told us since he’s a puppy, it would really only be 8 weeks but then when we had our post-op appointment with the surgeon and got radiographs, they told us it would only be another 3 weeks for 6 weeks total of recovery time! Boy, were we ALL happy. It is so hard to restrict a puppy and I’m sure he was wondering why he couldn’t do half the things he was allowed to do prior to surgery! He is now free to do whatever he wants! He goes up and down the stairs, jumps on couches, and I think since he’s also getting a bit older, he loves lounging and sleeping in the living room when we’re working now. We rarely have to crate him anymore during the day. We love having him out with us and I’m sure he loves it too :)

He’s grown so much in the past two months ? we didn’t think he’d get any longer but he sure has! We had to upgrade his crate to a bigger one to accommodate his length. It’s funny because crates are made for dogs that grow in length and height…but since Winston is a corgi, he’s only growing a lot in length so the crate itself is huge for him. He seems so tiny in the crate!

Anyway, here’s a photo update of Winston with descriptions of what we’ve been up to the past couple months! 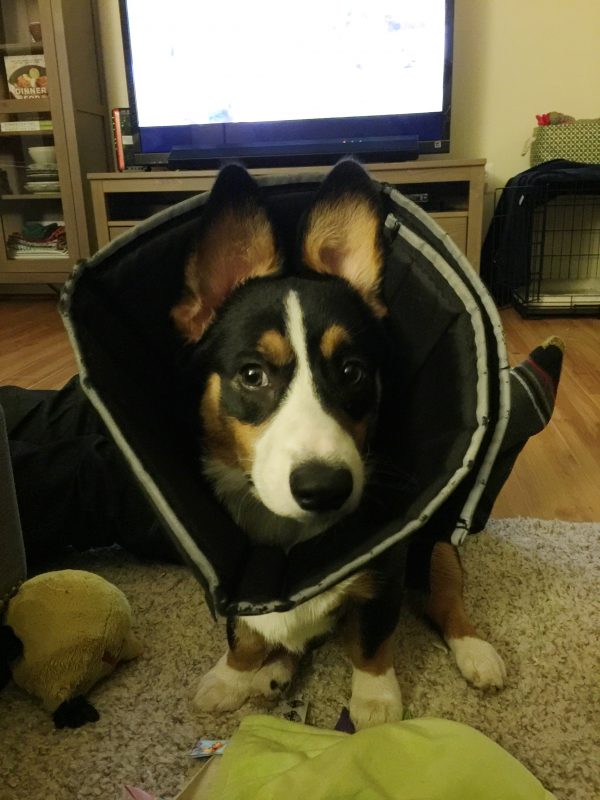 He had to wear a cone for a while because he wouldn’t stop licking his surgery incision! We were THISCLOSE to healing and there was this giant scab on it. We certainly didn’t want to regress and have him get stitches again because he opened up the wound or something, so we put him in a cone for a good two weeks to make sure we were good to go! He ended up loving the cone because it wasn’t the hard plastic ones. We got him a soft e-collar and I honestly think that is the way to go for all dogs! Winston ended up using it sort of like a pillow when inside his crate. It’s pliable since it’s soft so he was able to easily maneuver around in his crate with it on. 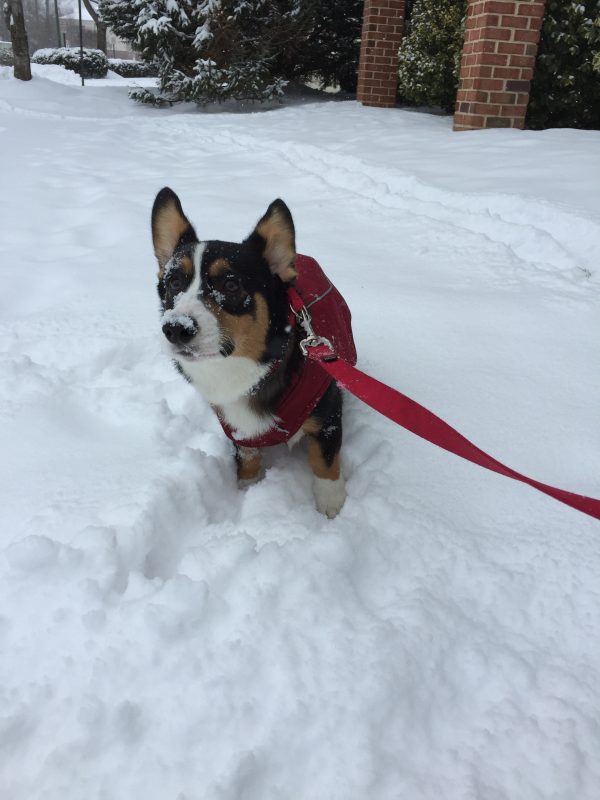 Right after the blizzard happened, we got another 4-5 inches of snow. This time, Winston was able to frolic in it since he didn’t have a cast. He LOVED every minute of it! Doesn’t his little jacket look so cute? 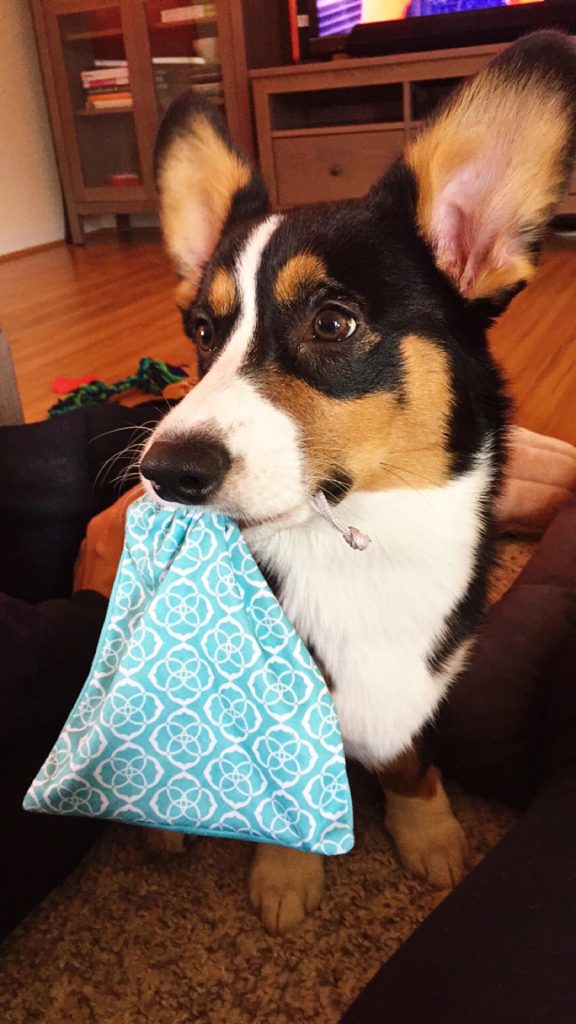 Winston is obsessed with jewelry bags. It’s so funny. He loves chewing on them and rooting in them. 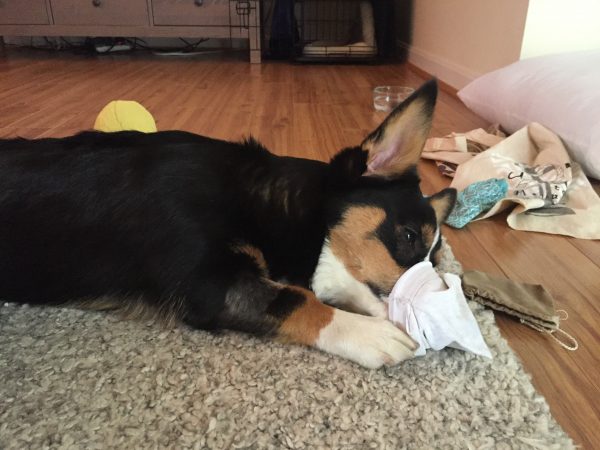 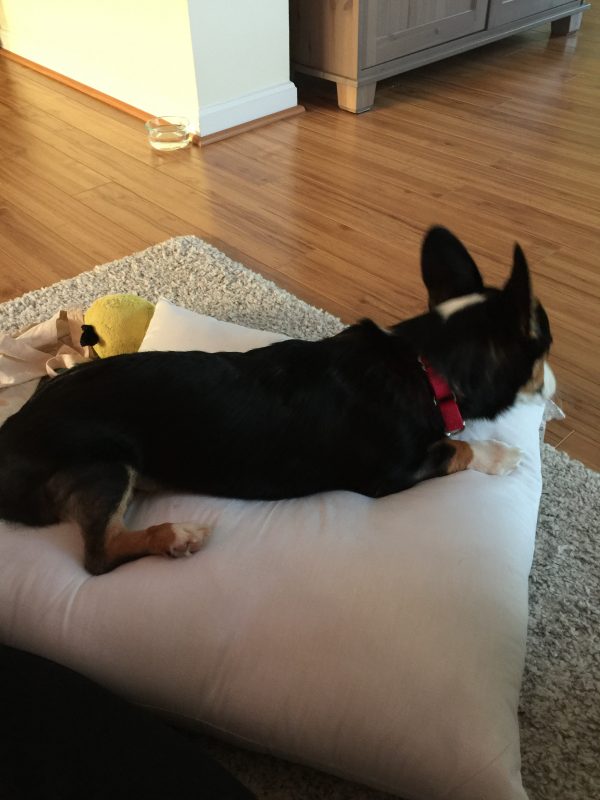 This giant pillow that we were going to donate has become his new favorite ‘toy.’ He just loves to attack it or lay on it. It’s either one or the other, haha 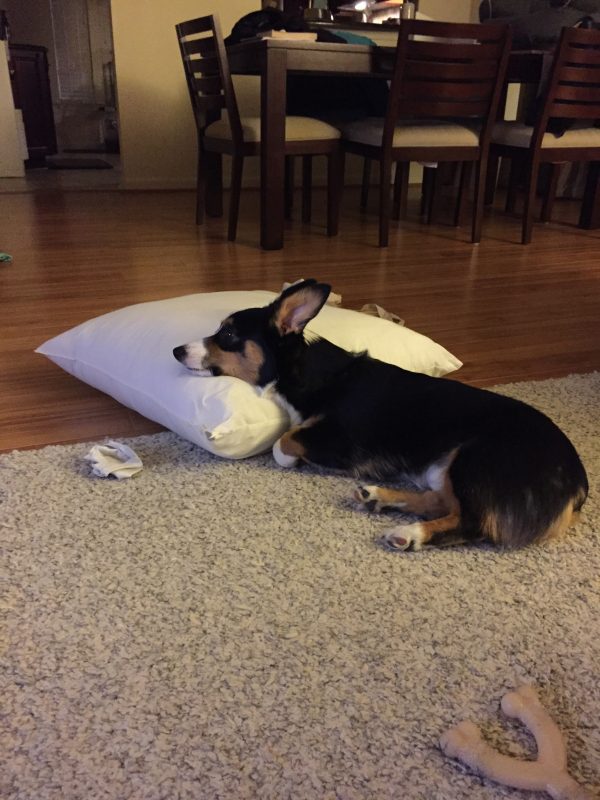 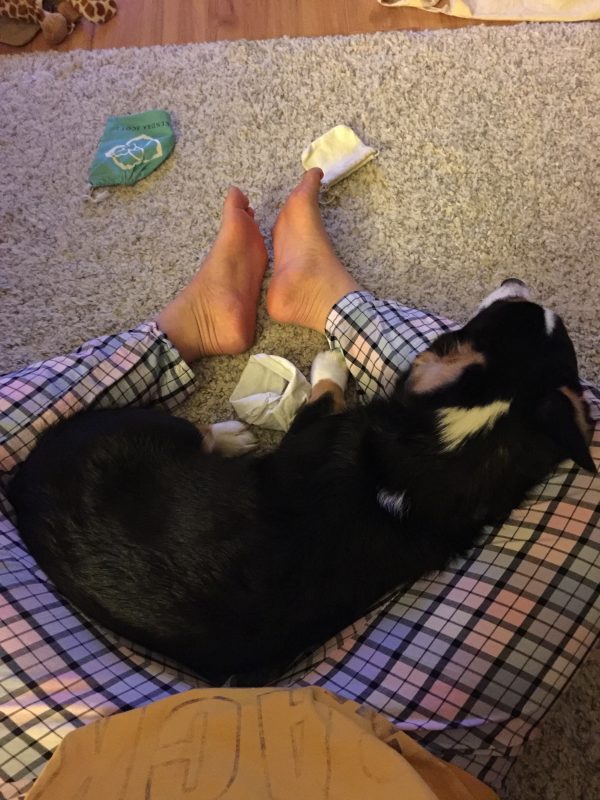 My new favorite thing of his that he does is curl up in between my legs when I’m sitting on the floor with him. So cozy and sweet. 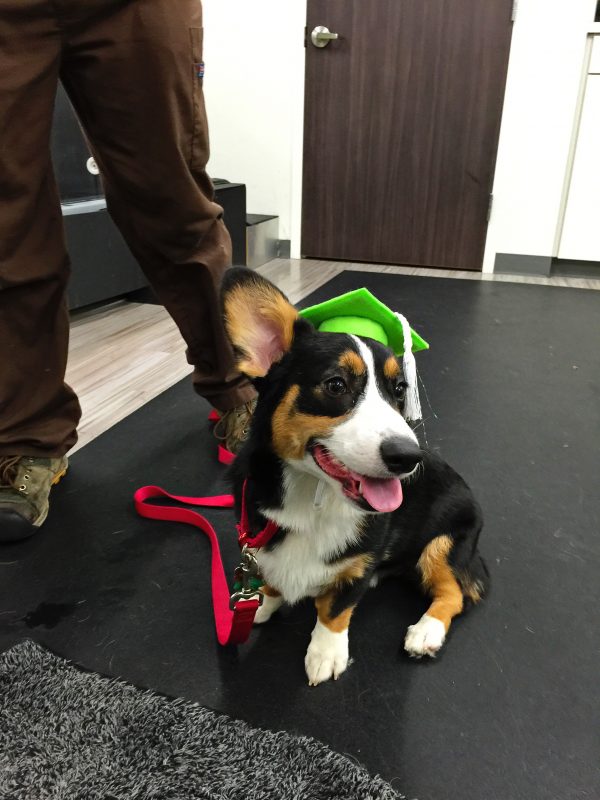 He graduated from physical therapy!! Hahaha, they had this whole banner, certificate, and cap for him. Hilarious!!

Just a note: if you ever are need of an amazing team of orthopedic surgeons and physical therapists, we highly recommend VSC in Vienna, VA. The owner and lead vet there, Dr. Anke Langenbach, studied in Germany and is top notch. We had Dr. Julia Hawthorne perform surgery on Winston and she was marvelous. The communication was great throughout the entire process and we really couldn’t have had a better team to help Winston. Also, sad I have to disclaim this but you never know what people think: obviously this is not sponsored. We paid for everything regarding Winston out of pocket. 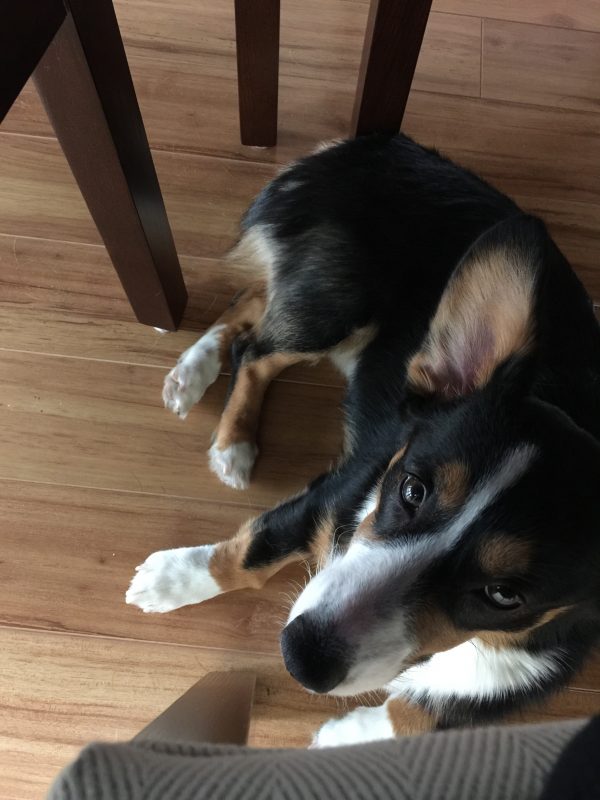 Since we keep him out with us a lot now, his favorite spot is under the table when I’m on the computer. 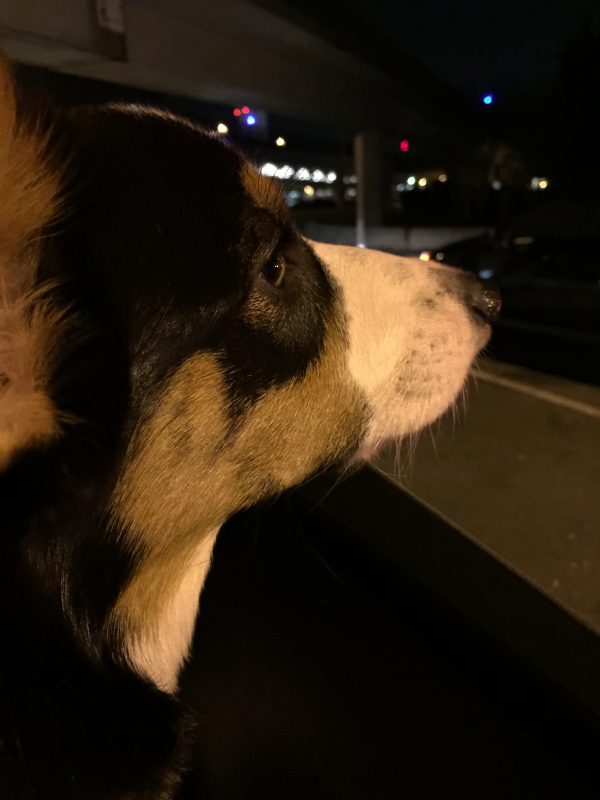 His other new favorite and a phrase he’s learned is ‘car ride.’ Oh man, oh man. Winston LOVES car rides, but what dog doesn’t? The above photo was taken when we were waiting for Jason at the airport. 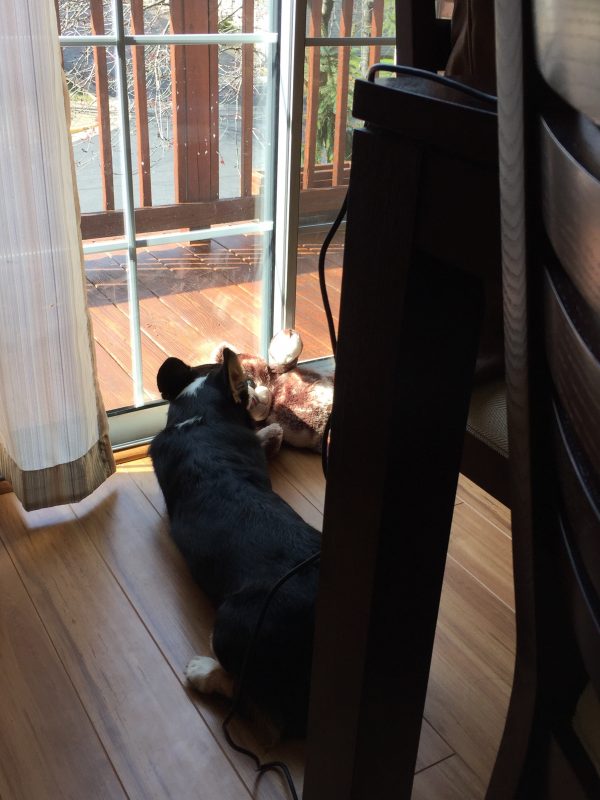 I have this stuffed build-a-bear that he absolutely loves to attack. If you follow me on Snapchat, you’ll see him attacking this bear quite often. He carries him around by the ear and loves to sit in front of our sliding glass door to patrol the neighborhood and chew on the bear. 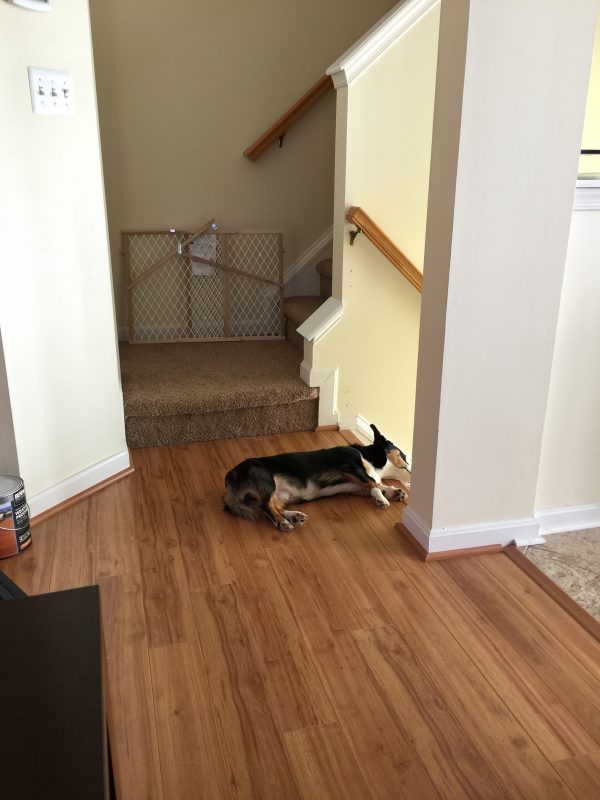 We’ve gotten extremely nice weather lately so we’ve been taking him out on walks more often. The downside is that since he’s got a double-coat, he gets hot really fast! Whenever we get back from walks, he immediately retreats into the cold kitchen floor tile! 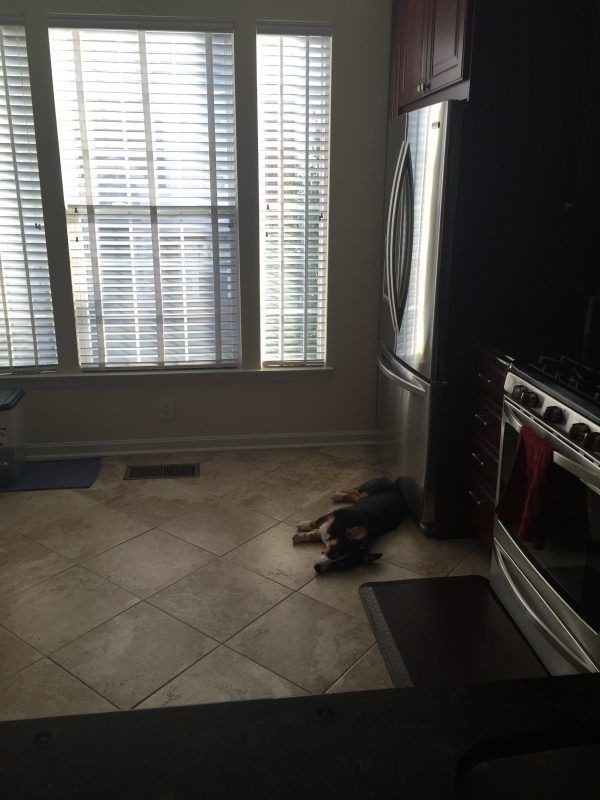 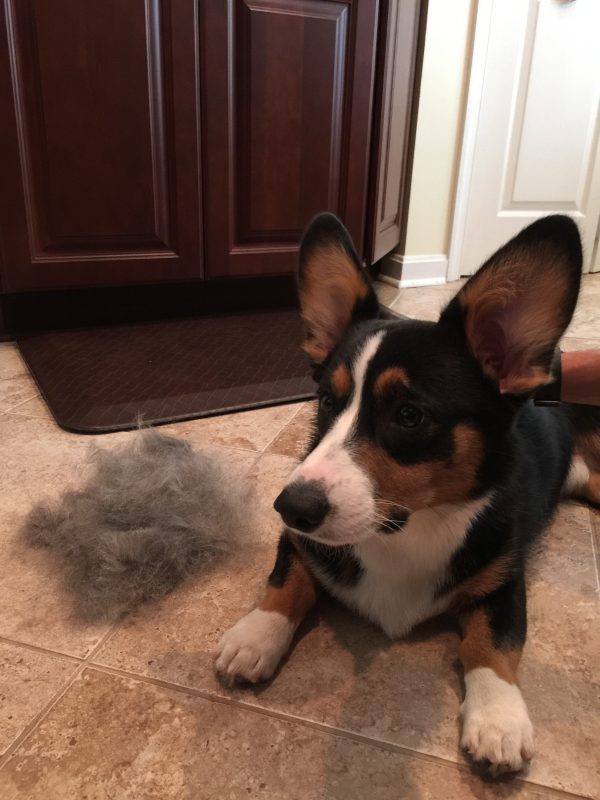 Speaking of warmer weather…it’s officially shedding season!! That was just ONE furminating session. We did another one the next day and the ball of fur was about the same! It’s crazy!! Haha 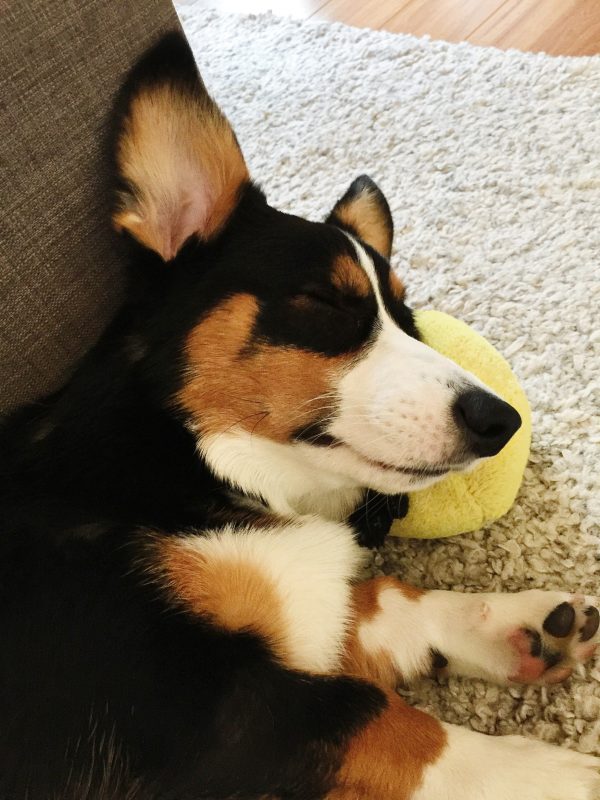 I love when he falls asleep on his toys and uses them as pillows. It’s the cutest thing ever!! 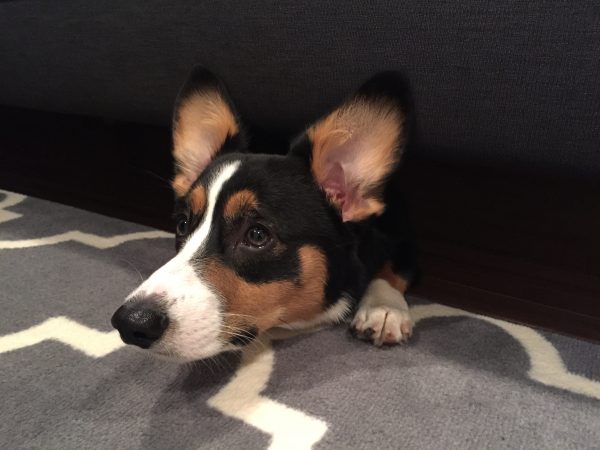 Okay so this is sad because it just shows that he’s growing so much. He used to be able to fit under the couches and move around under them. He still technically can but he gets stuck often now. This is a photo of him stuck under couch. We usually have to lift up the couch for him to get out. 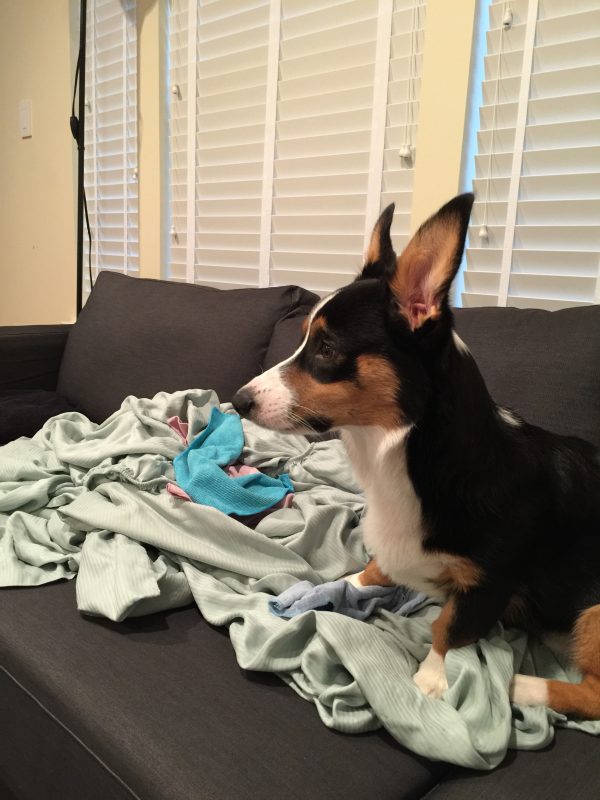 We tried to give Winston chores to do, such as fold the sheets and towels, but he does such a horrible job that we had to fire him ?

Winston is so stinkin cute! We have a Corgi as well. His name is Nigel :-) He is red and white, and we've had him for 3 years now.. They are the sweetest dogs, aren't they?! He gets along so well with my 1-year-old daughter.

I'm so glad Winston is doing better! I've been following along and thought of how upset we would be if that happened to our Nigel!

Aww sweet Nigel! Yes, they're the best dogs ever!!! Thank you for your kind words for Winston!

Oh it's so hard when your fur babies are sick! I'm glad Winston is back up and at 'em! We got a puppy about six weeks ago and she has brought so much sunshine and happiness to our lives. I love watching her learn and grow. They are the greatest gifts, and truly man's best friend :)

Aww hope you're loving your new life with puppy! It's seriously the best. They really are our best friends <3

nicole @ I am a Honey Bee

So cute! Seriously. I've just found your blog, but it looks like your pup is on the mend!

Awww! Winston is so cute!! Merlin (our puppy) had his nutters removed yesterday, so we are feeling the pain of keeping a very active puppy calm. Yay for Winston feeling better.

Aww, I'm sure Merlin will be up and healed in no time! Winston healed super quick from his neuter. They're so resilient :)