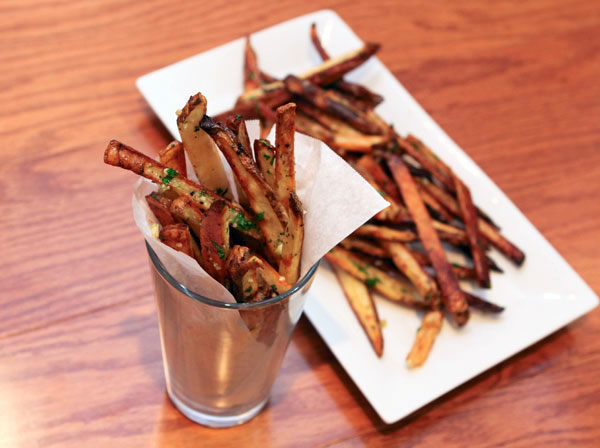 So, these pictures are far from great. 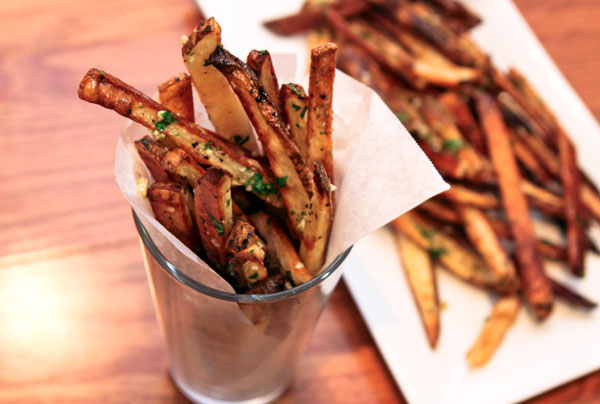 But I can assure you that the fries were amazing.

I took these pictures after our fire alarm had gone off. It was a moment of pure CF and yeah, I guess I could’ve taken them later after my heart stopped beating out of my chest, but I wanted to just “get it over with” cause I didn’t want the fries to get soggy.

So, how am I supposed to know that I can’t turn my oven on above 450 degrees? I thought it was a NORMAL occurrence to use your oven that produces HEAT. Apparently, in my apartment, if I ever turn my stove to 500 degrees, the fire alarms in my apartment start blaring. It’s the most annoying screeching beep, I’ve ever heard in my entire life. I’d rather have nails on a chalkboard. Maybe. Not to mention, everything was going fine and dandy in my kitchen before that stupid alarm went off. I was cleaning up and Jason was taking a very deep nap (you can tell it was one of those deep sleeps cause he usually never takes naps and no sound I made would wake that man up, haha except what was about to happen) and I had just checked on the fries. They were halfway done so that meant, you crank up the oven to 500 to brown them. And 2 minutes later..beeeeep beeeeeep. Well, shit.

You hear J from our bedroom, I run in there and I’m like “sorry!!” and he’s like, “well, it’s not my alarm, I tried turning it off!!” (GOD BLESS THIS MAN, hahaha he was in such a deep sleep that he thought it was already the next morning and that it was his ALARM CLOCK). I guess it took him a few seconds to realize “oh, Julie tried to burn down our apartment.” So we opened our screen door (this is assuming the fire alarm went off cause there was smoke BUT THERE WASN’T ANY, which leads me to believe my apartment complex just doesn’t want me to cook) and started furiously fanning our fire alarms with pillows like idiots. It finally stopped, but too late cause our ears were already well on their way to bleeding.

And there you have it. This is how the garlic fries came to be. What even possessed me to cook them in the first place was cause I love Gordon Biersch’s garlic fries. I will go and order them just purely to taste that garlic and fried taste. Yeah, I’m disgusting. Whatever. If you’ve ever had it there, it’s the best thing they have. And you pair it with an ice cold beer (that they brew there) and burger and you’re set. 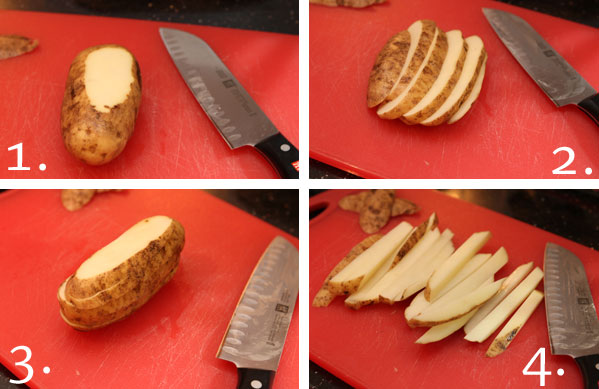 So this is how to cut the potatoes. You guys probably wouldn’t have understood the way I’d explain it. I’d probably confuse the heck outta ya. So I took pictures :) 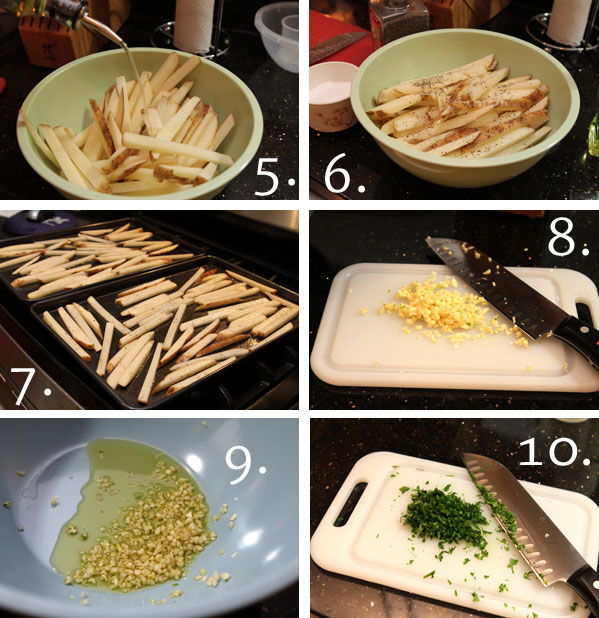 And since I was taking pictures, I decided to continue the rest of what I did lol 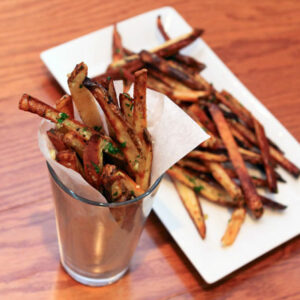 I loooove fries and these look perfectly crispy for baked rather than fried ones! Have you ever tried making them using golden potatoes? Those are the only ones I have on hand.

I love these fries and I love the story! I do the same thing in my house all the time and it drives the dog (and, let's be honest, my husband too) crazy!

Oh my gosh, I can't tell you how many times that has happened to me! Just yesterday I turned the oven up to 450 to bake burger buns and all then had to open the kitchen window because I knew the alarm would be going off soon. So annoying!

The fries look great though! At first glance, I thought they were fried - I don't usually like baked fries but these look so close to the "real thing".

it's SO annoying! i thought i was the only one that it happens to, but I guess not :) I don't understand it..blah! they actually don't really taste baked..they're pretty crunchy and french fry-esque. I loved it.

These look sooooooo good! And for an oven fry?! YUM

Yum, yum, yum. There is a restaurant in KC that has garlic fries so similar to these. They are AMAZING!

our love for fries will bring us together one day..i can't wait to eat at that restaurant in KC when me and Krissy come visit :) this needs to be planned!