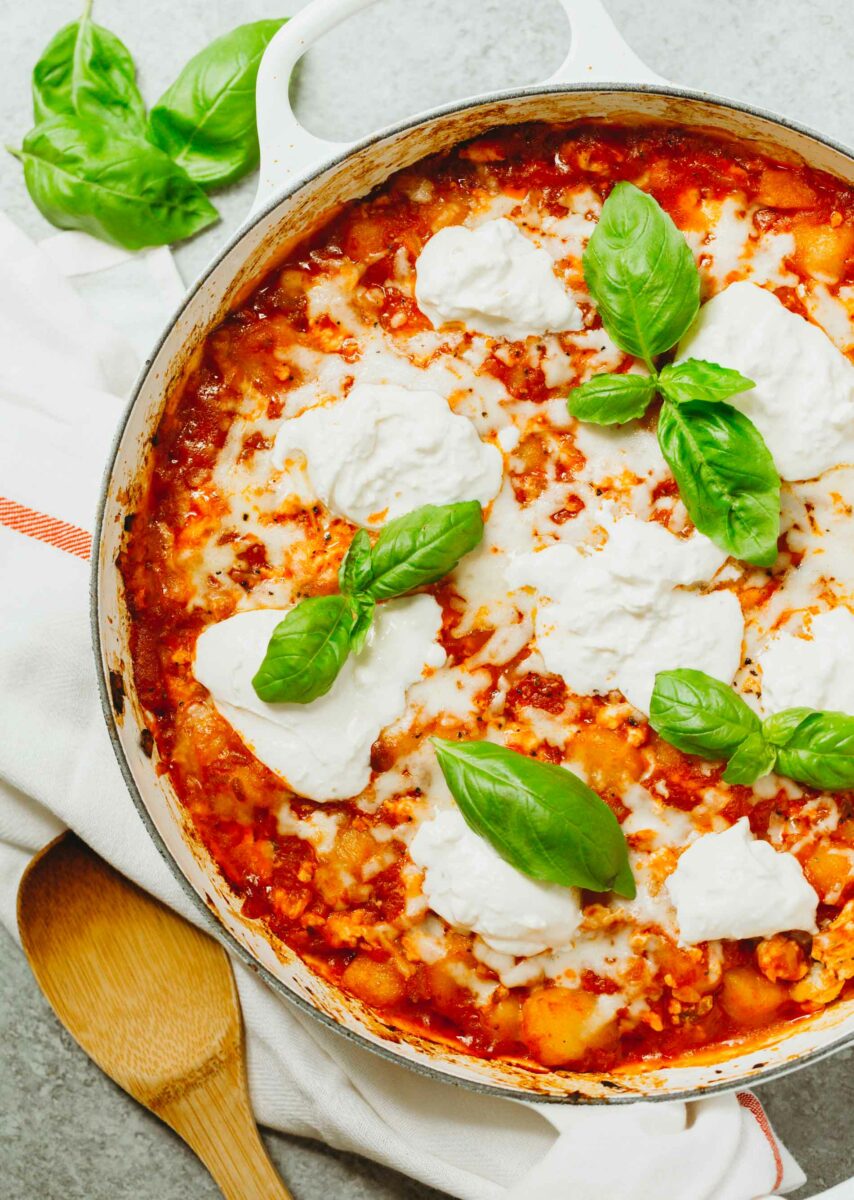 I love chicken parmesan as much as the next person but sometimes having it served over pasta puts it over the top.

This chicken parmesan gnocchi bake is made all in ONE skillet and it’s just as satisfying.

Plus, it’s a great way to use that Trader Joe’s cauliflower gnocchi that is considered to be rare magic.

If cauliflower can somehow become pizza…you, my friend, can do anything.

Have you seen that quote being thrown around?

Cauliflower is all the rage and then Trader Joe’s goes and makes cauliflower gnocchi and everyone’s head explodes.

Like seriously, it was probably the most coveted Trader Joe’s item in 2018.

But because it was so coveted, every time you went, it was sold out.

Thankfully, I never had issues with it but I also was that crazy lady that had 12 packs in my cart every time I went to my local Trader Joe’s.

But maybe you could say I was also the reason why Trader Joe’s was always out of stock?

You could see it either way.

I once asked the cashier, “is there a limit to how much cauliflower gnocchi I can buy?”

She gave me a weird look and said, “no” but the only reason I asked was because someone on my Instagram told me that their Trader Joe’s has a limit.

Look, if you’re going to limit cauliflower gnocchi, you may as well tell us cauliflower is fake. 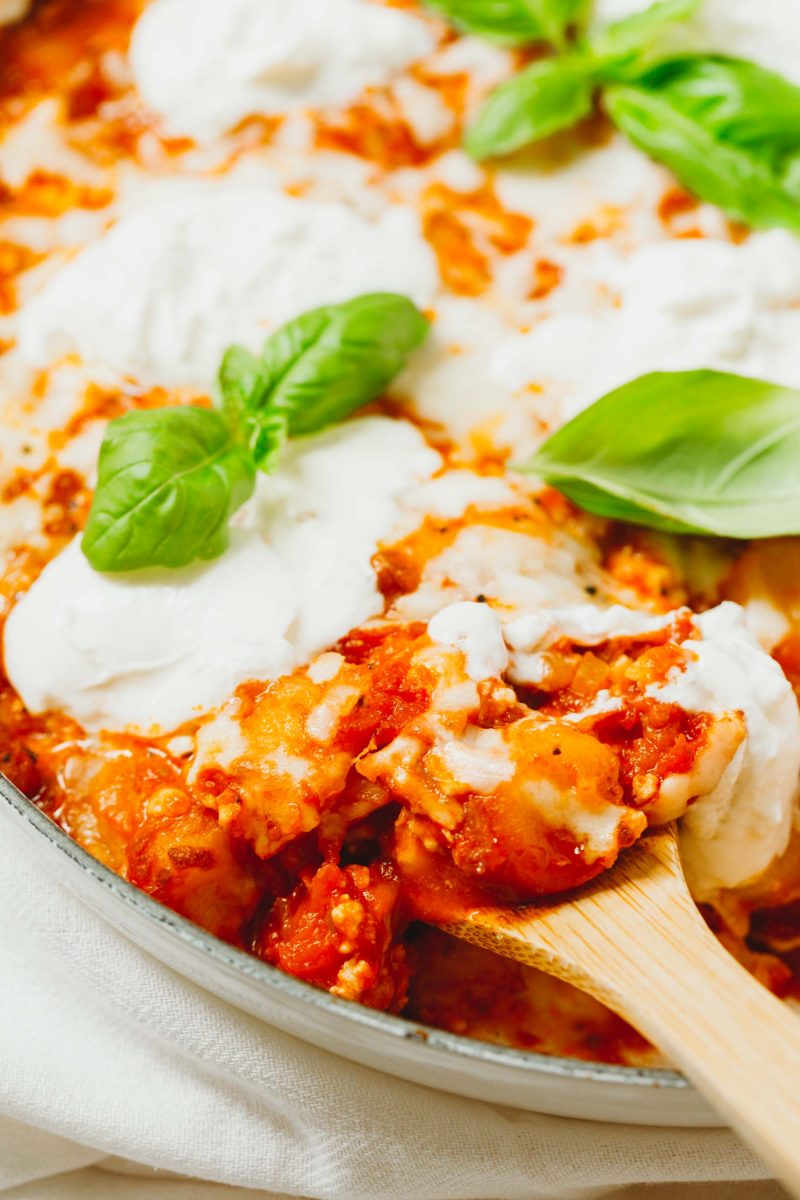 What makes this a chicken parmesan gnocchi bake?

Well, it has got the flavors of a chicken parmesan dish and everything in this gnocchi bake goes into the skillet to finish cooking in the oven.

What makes this low-carb?

The cauliflower gnocchi! But the whole dish itself isn’t *that* low-carb. I would say it’s lower carb in comparison to the actual chicken parm pasta dish.

What if I can’t find cauliflower gnocchi?

You can just make this with regular potato gnocchi because who are you to limit your carb intake?

Haha, but seriously, if you can’t find cauliflower gnocchi, you could make your own or just use potato gnocchi.

My gnocchi comes out gummy and mushy

Some people don’t like the cauliflower gnocchi but Jason and I don’t mind the mushy/gummy texture.

It’s also in the way you cook it but like I said, we don’t mind the texture so we usually always just cook it in a bunch of sauce instead of toasting it. 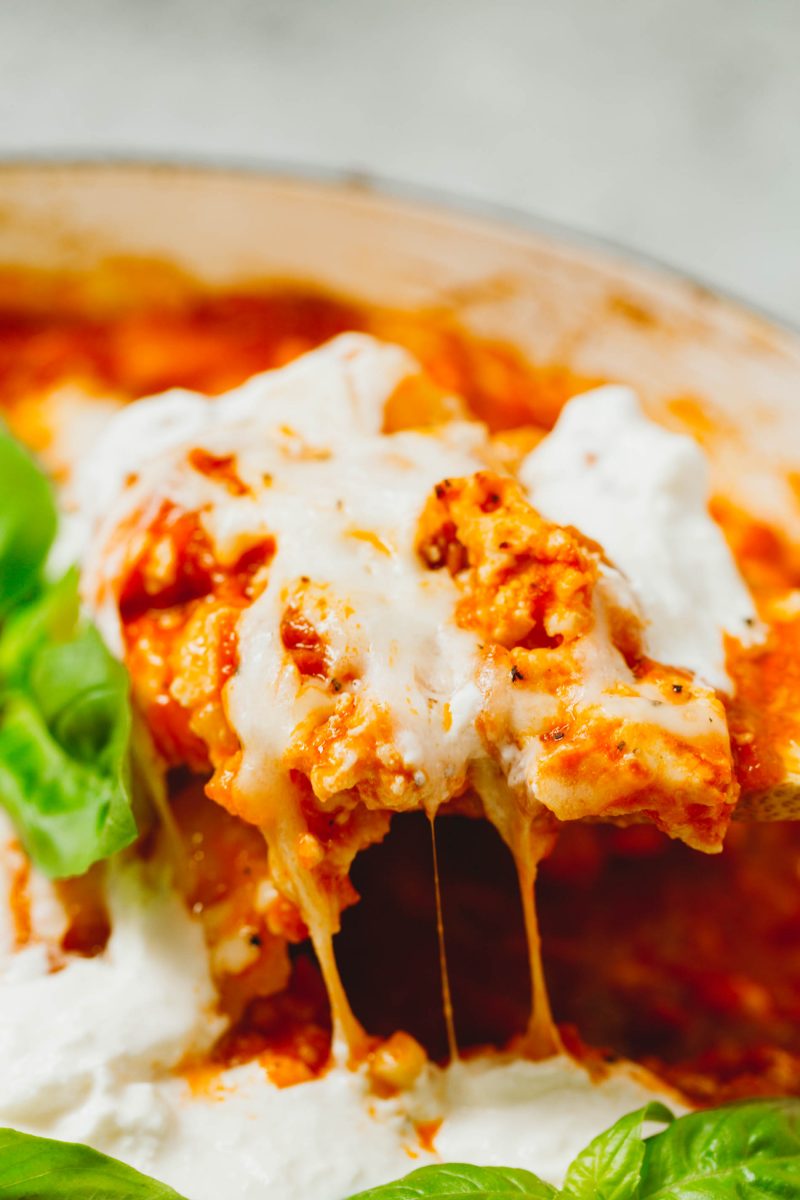 Can you substitute the gnocchi for real pasta?

It wouldn’t necessarily be called a gnocchi bake anymore but you certainly can use real pasta.

What pasta shape would you suggest?

I would use short-cut pasta shapes like penne, rigatoni, farfalle, etc.

I would definitely not suggest spaghetti, linguine, fettuccine-type pasta shapes. 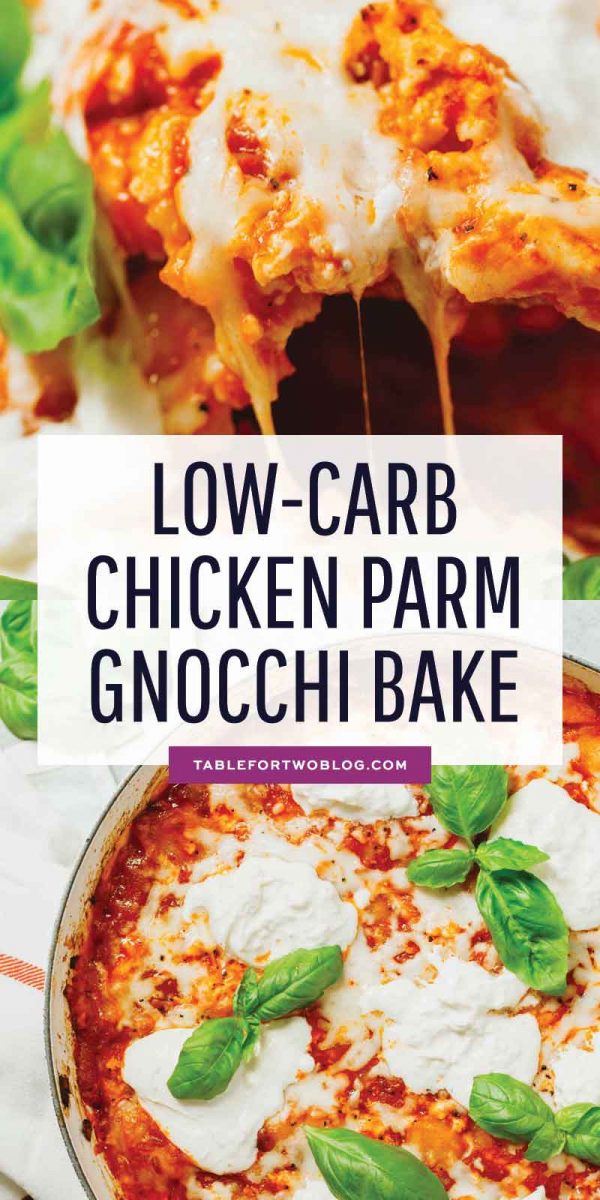 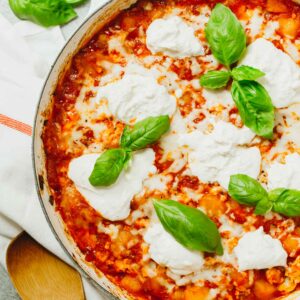 I love this as well as my boyfriend, and friends that I have passed the recipe along to! I personally double the meat in it, cause I like meatier dishes, and it still comes out great!

Absolutely delicious!!! I've been messing with chicken cauliflower gnocchi recipes and this is my and my husband's favorite!! I used diced chicken breast instead of ground and added mushrooms and crushed red pepper. Absolutely adding this to our rotation. Thank you!

Oh, wonderful!! I'm so glad this worked out for you!

What I Love This Week - Andie Mitchell

Dear lord...as if I needed another reason to stalk the cauliflower gnocchi bin in my Trader's. This looks so good!